Antequera and a mesmerising landscape

Antequera and a mesmerising landscape

Our motorhome journey continued to Antequera, beginning in the centre of town and ending in one of the most memorable and unusual landscapes we’ve ever seen. It’s a busy market town with a history dating back to the bronze age and the area is peppered with interesting sites, a very generous 30 churches, roman ruins and a lovers’ legend. The drive there took us through miles of farmland where they grow asparagus, cereals and olives and in the summer are ablaze with the yellow glow of sunflowers. Yet again we found free overnight motorhome parking just on the edge of town. It was quite close to the road but quiet and we weren’t disturbed so it was fine. 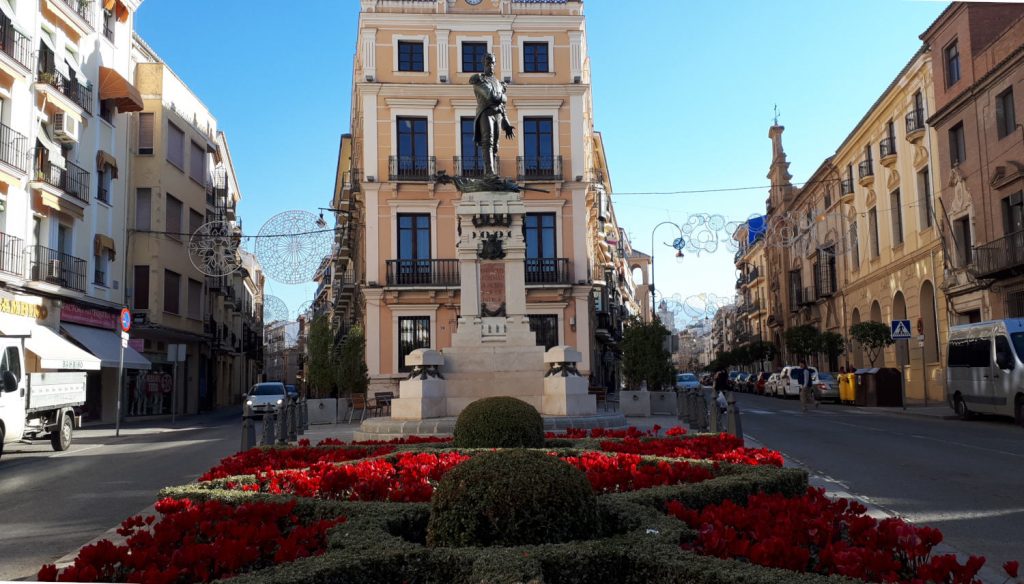 As we set off to take a look around we came across the Estepa Gate, quite an ornate arched gateway in the middle of a roundabout. To the side was the bullring, which we’re not personally fans of but the building was quite eye-catching and is home to a couple of restaurants as well as the bull fighting museum. We could see the hilltop castle ahead of us and started to dread the inevitable climb up to it. As it was the road sloped up then turned into wide steps which weren’t actually too tough on the thighs after all! The Alcazaba fortress is a 13th century old Moorish castle and is approached through the Arco de los Gigantes. There’s a great view from there, over the rooftops and white painted buildings of the town and we spotted at least 7 of the church spires. Walking onwards, there’s a large open square, even larger church and then an open outlook to the back with views down to the recently excavated Roman baths with intact mosaic flooring still in place. 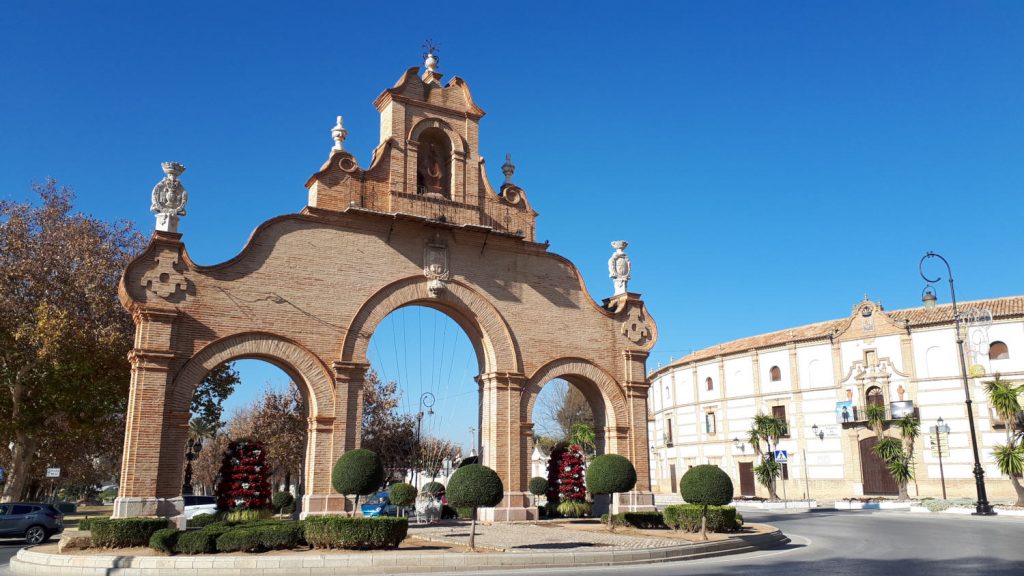 Estepa Gate, Antequera and the bullring on the right

The next day we set off in Buzz to visit the nearby Dolmens.  A series of 3 ancient burial mounds created by Iberian farmers at least 5000 years ago. Each different in build they were fascinating to visit and the film in the visitor centre explains how they were each created by dragging huge quarried rocks into position over pre-dug chambers. There were dozens of skeletons found in them when they were excavated in the 19th century and they are among the largest and most complete megalithic structures in Europe. The largest is the Menga Dolmen which is the largest in europe.  It’s position is particularly notable, as on the summer solstice the sun shines straight over the peak of the Pena de los Enamorades and straight along the dolmen’s entrance.  The chamber is 25m long and made up of 32 massive stone slabs.  All three have now been added to the UNESCO World Heritage List along with the Antequera El Torcal Natural Park and El Pena de los Enamorados rock which we could see in the distance. 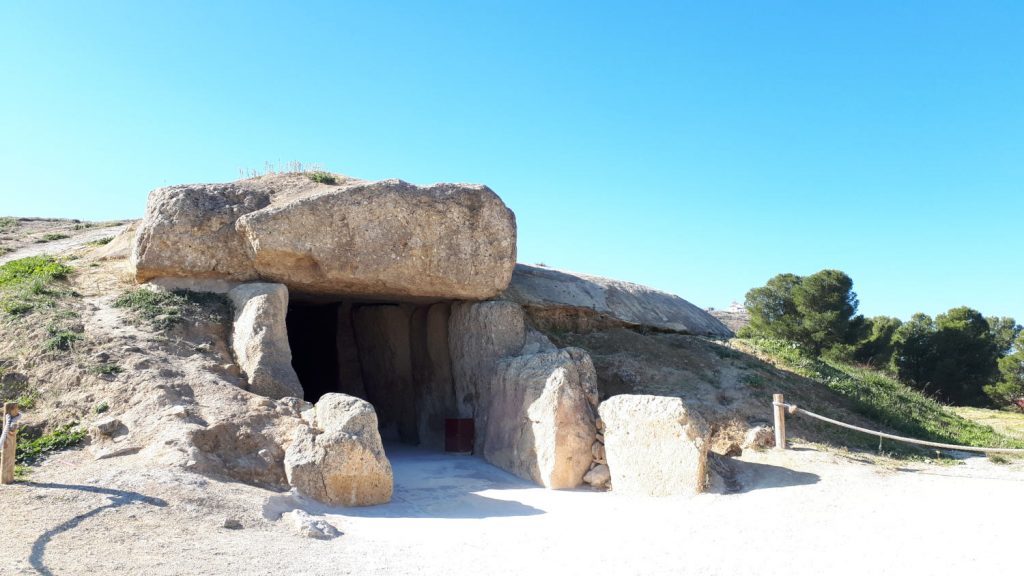 Also known as Lovers’ Leap or Lovers’ Rock, legend has it that a beautiful Muslim woman and a handsome Christian man who were in love, fled to the rock chased by Moorish soldiers and leapt to their deaths rather than be apart.  It’s also said to look like a man’s sleeping face in profile – can you see it? 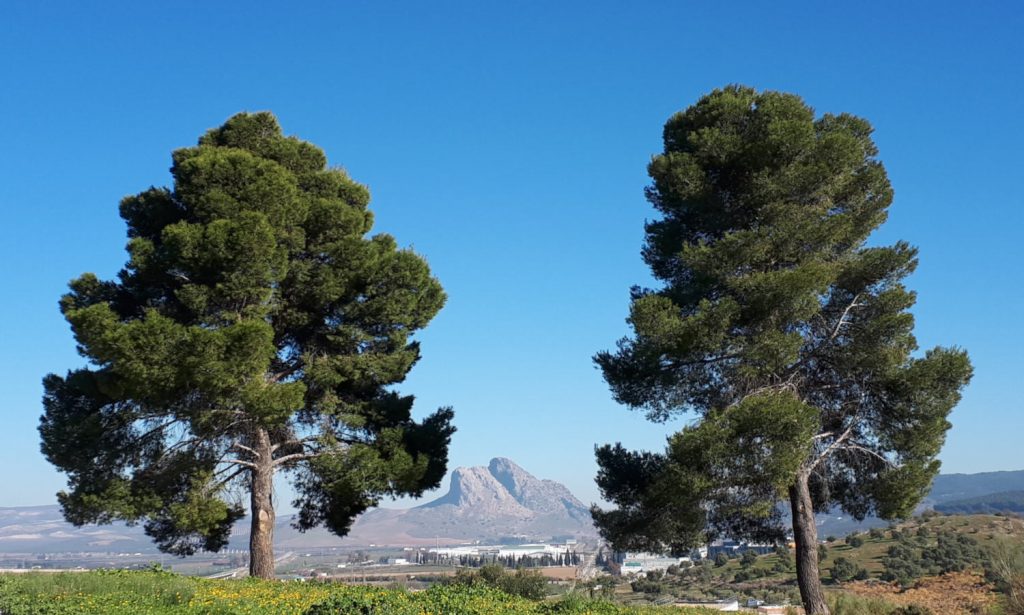 The third and best part of our visit took us to El Torcal. We had seen photos online so thought we knew what to expect but a photo and seeing something with your own eyes is completely different. The strange thing about El Torcal is that you can’t see it from a distance. There are no sneaky views ahead, it is completely hidden until suddenly you are in amongst it as if you’ve just landed on another planet. Turning off the mountain road we drove through the park barrier and started up the steep winding road to the car park and visitor centre. The scenery on the way up was beautiful too with far reaching views over the mountains beyond and the town of Villaneuve la Concepcion in the distance.  It all looked so pretty with the pink petalled, fragrant almond trees in blossom too. 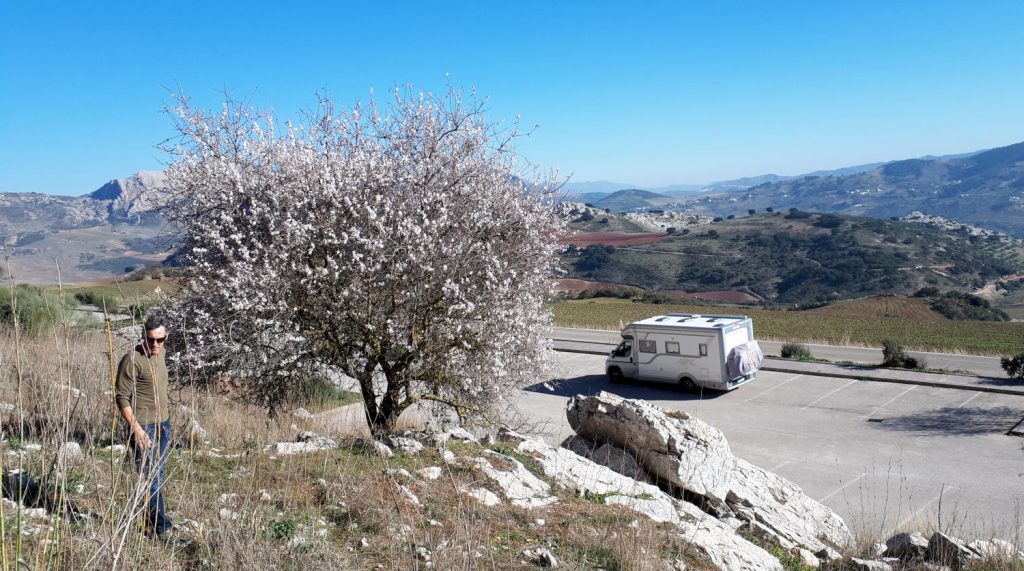 And there it was – the most surreal, spectacular and thought-provoking landscape that just filled our minds with wonder. After parking up we got straight out to look around and try to make sense of it all. We’ve said this before but thought exactly the same again – just when you think you’ve seen it all (in terms of mountains this time) nature surprises you again. We’d fallen in love with the Alps in France and the Dolomites in Italy and it was about to happen again, in Spain. Not exactly mountains, but a vast rocky area, 1000m above sea level, totally different and quite unique.  It was about 3.30pm by the time we arrived so we went straight to the visitor centre where the walking routes were explained to us. There are two walks you can do without a guide, a shorter one of about 45 minutes and a longer 2 hour one. We opted to take the short walk first along with a nearby viewpoint and save the longer walk for the next morning. 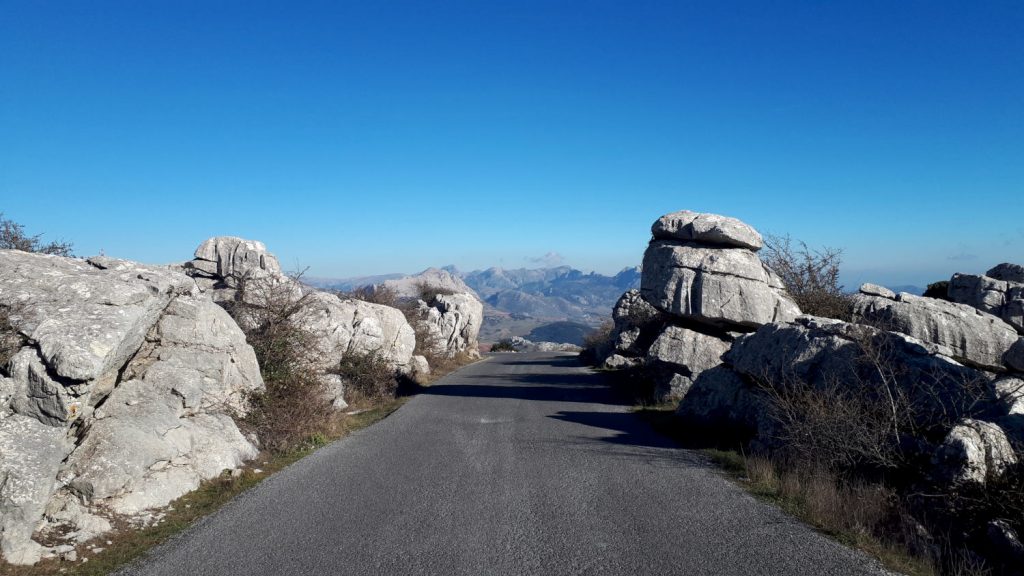 We were barely into the walk when we heard scrabbling sounds and looked ahead to see a group of Ibex, wild goats, nibbling on the thorny bushes and vegetation. Often when you’re told wildlife live in a certain place you don’t see a thing, but this first group turned out to be the first of many we saw. They didn’t seem too worried about us approaching and only trotted off when we got quite close.  They’re so agile and were hopping across the rugged rocks effortlessly when they weren’t basking in the sun on the highest rocks. 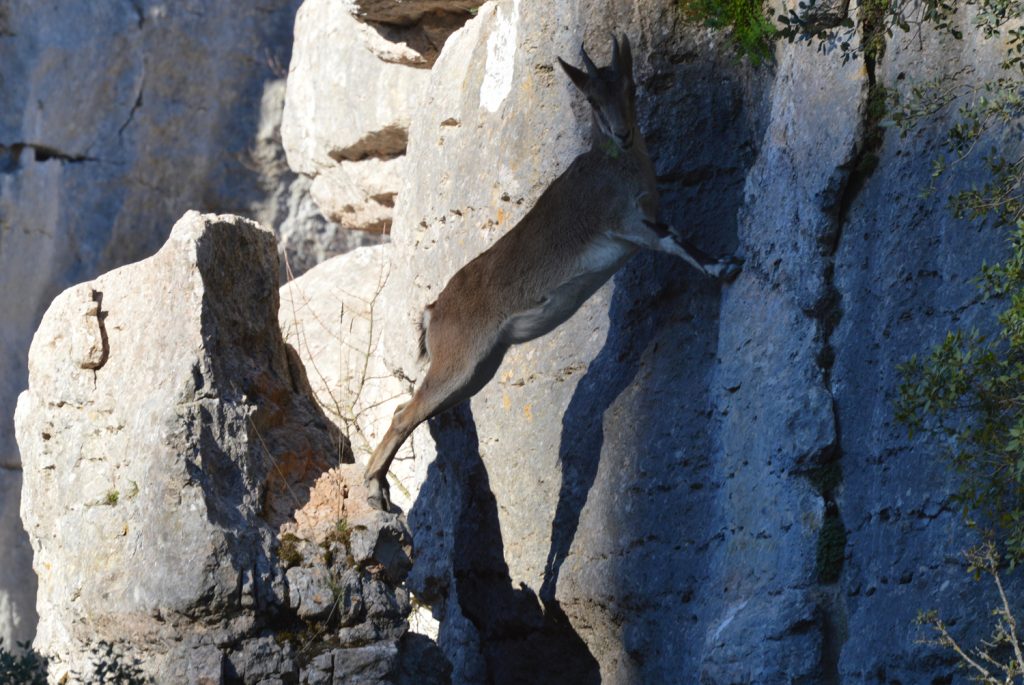 As the pathway opened out the immensity of the bizarre limestone rock formations became clear. They towered all around us, rocks precariously stacked on top of each other, strangely clinging on where they didn’t look like they should be. Every way we turned there was another astonishing sight to see. Some in shadow, some bathed in light, each rock had a story to tell. Under the sea until at least 100 million years ago the exposed rocks have been eroded by wind and rain forming this unique, rare Karst landscape all around us. It might take some people 45 minutes to walk around here but it took us at least twice that. It’s not a place to rush through. As well as goats we also saw a couple of large flocks of sheep slowly grazing their way over the grassy areas, although it was the chiming bells around some of their necks we heard first. 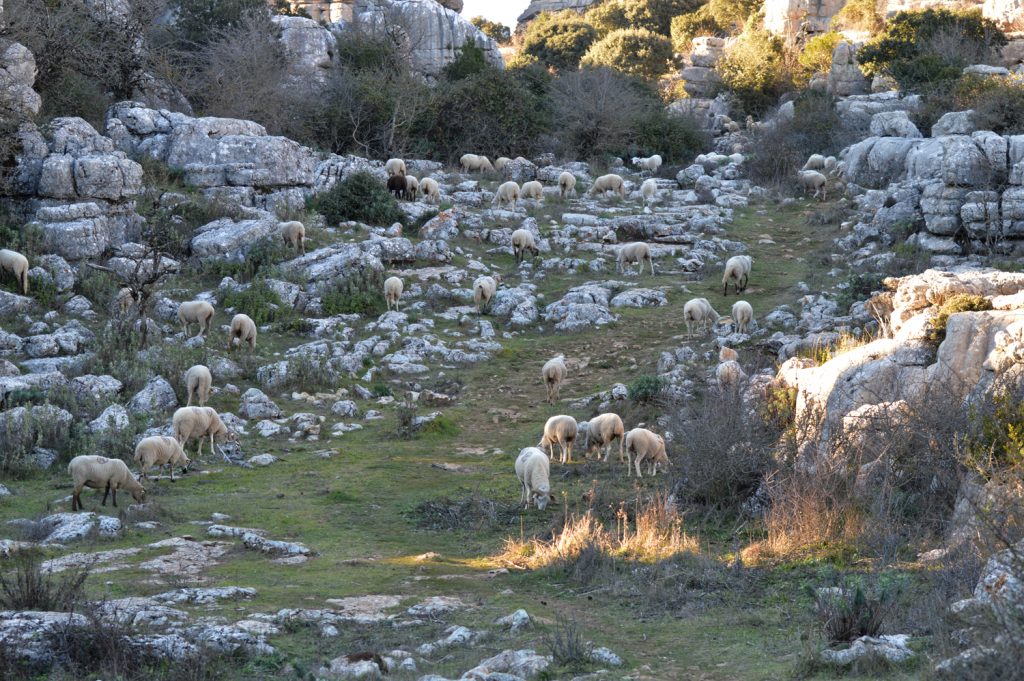 A herd of sheep chiming across the hills of El Torcal

On our second day we took the longer walk along with a picnic, flask of coffee and cold drink. We wanted to spend some time to wander slowly, sit and look, listen to the birds, look out for eagles, foxes and weasels and watch the Ibex leaping from rock to rock. It’s a place of two halves in the sense that one minute you can be in the shade with a bitter wind cutting right through you to the next sitting on a sheltered rock bathed in sun, coat off and sunglasses on. I know which side I preferred! 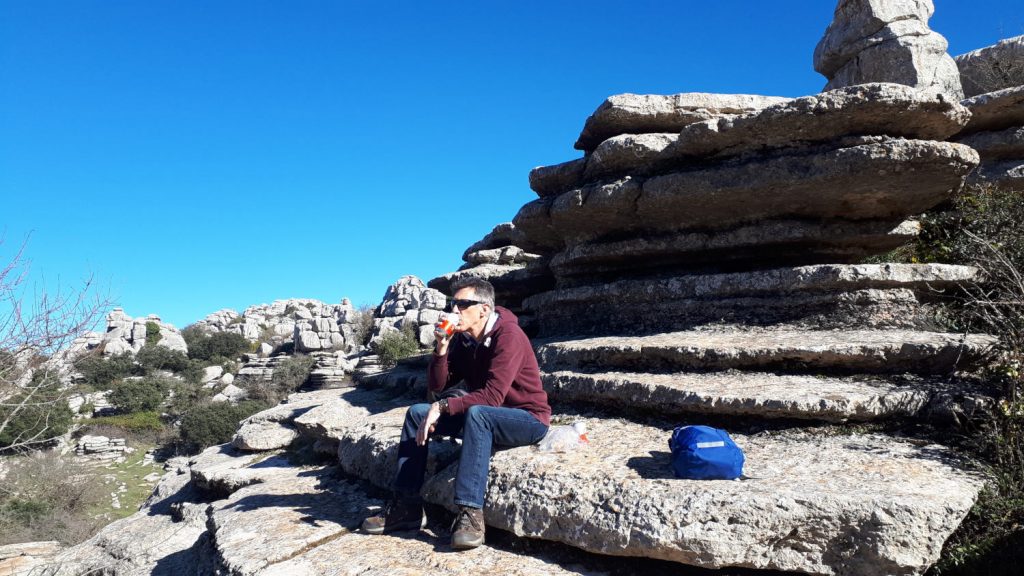 Sitting with a drink taking in the El Torcal rock formations

We’ve so glad we came here. There was a fantastic overnight parking spot for Buzz just off the mountain road below and yet again we saw sights we’ll remember forever. We’re slowly realising that we’ll never see it all and thank goodness for that. All the more reason to keep travelling …..