Auf Wiedersehen Germany – We’ll be back

Auf Wiedersehen Germany – We’ll be back

Sadly, leaving the Black Forest behind, our motorhome trip led us on to Bad Säckingen in the Waldshut district of Baden-Württemberg where we’d found overnight parking via Park4Night in a very quiet, very large swimming centre car park on the edge of town.  Smugly thinking we’d have a peaceful night tucked away there, we went to bed only to be kept awake half the night by all sorts of twigs and things falling out of the trees all around us. 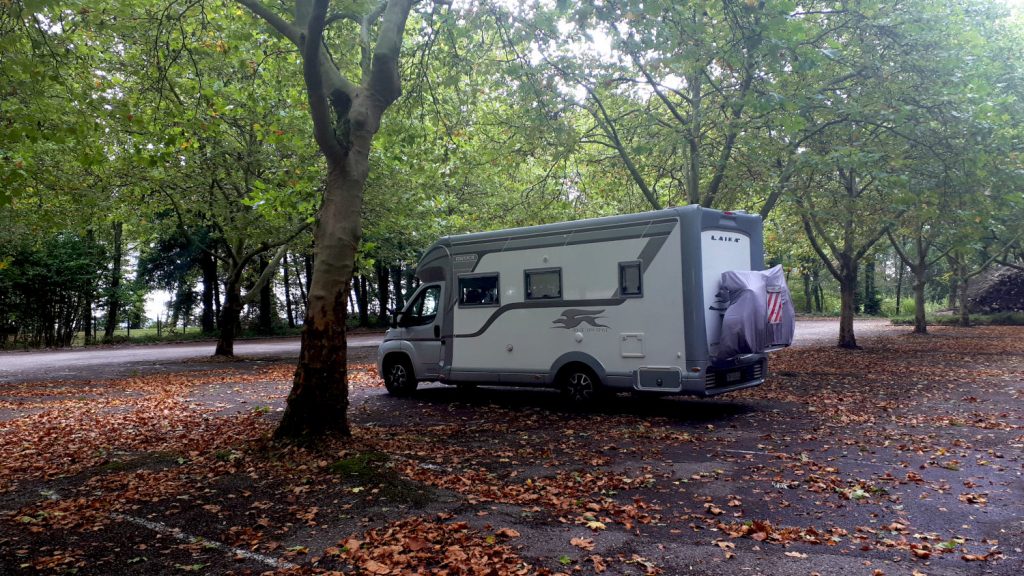 A not so peaceful night in Bad- Säckingen. The clue was in all the leaves and debris on the ground!

In the morning we drove to the centre of town.  We weren’t planning on staying long but had read about the unusual old bridge built in 1272 which is the longest covered timber bridge in Europe at 203.7m long, crossing the Rhine River.  Half way across at the white line you can have one foot in Germany and one in Switzerland at the same time.  The Fridolinsbrucke spans the river with 6 huge stone pillars and a wooden slatted walkway and provides a very pretty sight across the water but it wasn’t always quite so innocent.  A Swiss national momument, it was once kept permanently rigged with enough TNT to obliterate it in minutes if the need ever arose, along with other bridges along the Rhine – part of Switzerland’s armed neutrality policy.   These days the townspeople on both sides are so proud of the bridge, they have a bridge festival every year and at new year fireworks and celebrations bring everyone together, for the beautiful sight of the reflections in the river. 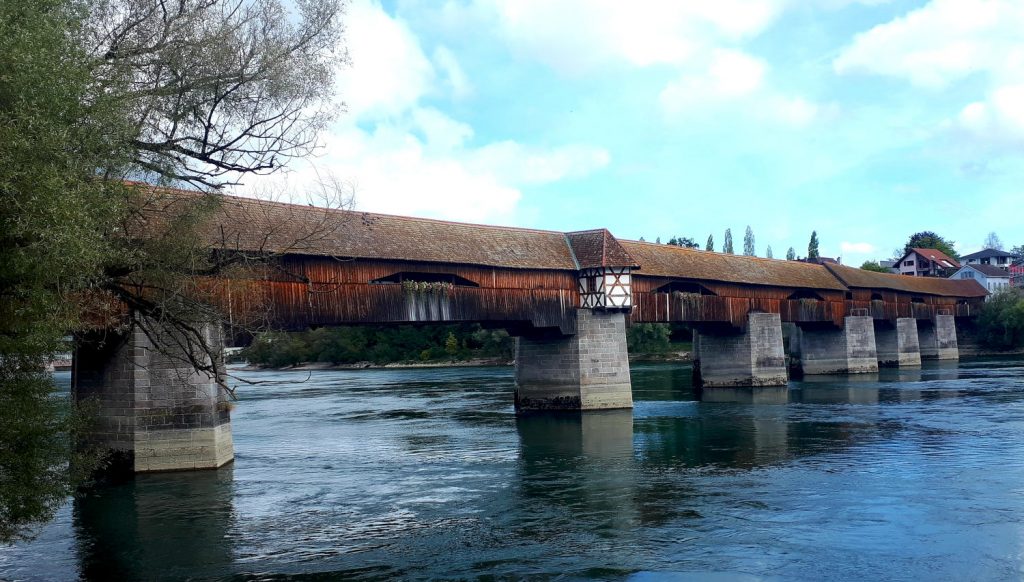 That was to be our last stop in Germany before crossing the border over to France and at this point it would be worth a quick mention about the roads in Germany which generally speaking are very good. BUT, we think we know why …..  It’s no exaggeration to say that on virtually every journey we have taken while in the country we’ve faced an ‘Umleitung’!  That’s Germany’s version of France’s ‘Route Baree’ or in other words ‘road closed’ or ‘diversion’.  It seems that to keep Germany’s roads in good order they are working on them all the time.  It drives our Sat Nav mad as she is constantly having to ‘recalculate’ and the voice seems to get curter and curter each time she has to revise her route!  It’s a small complaint about an otherwise very easy country to get around. It would just be nice to have at least some days where we could go straight to our intended destination without having to drive all around the houses to get there.It’s time for us to say Auf Wiedersehen to Germany for the time being. 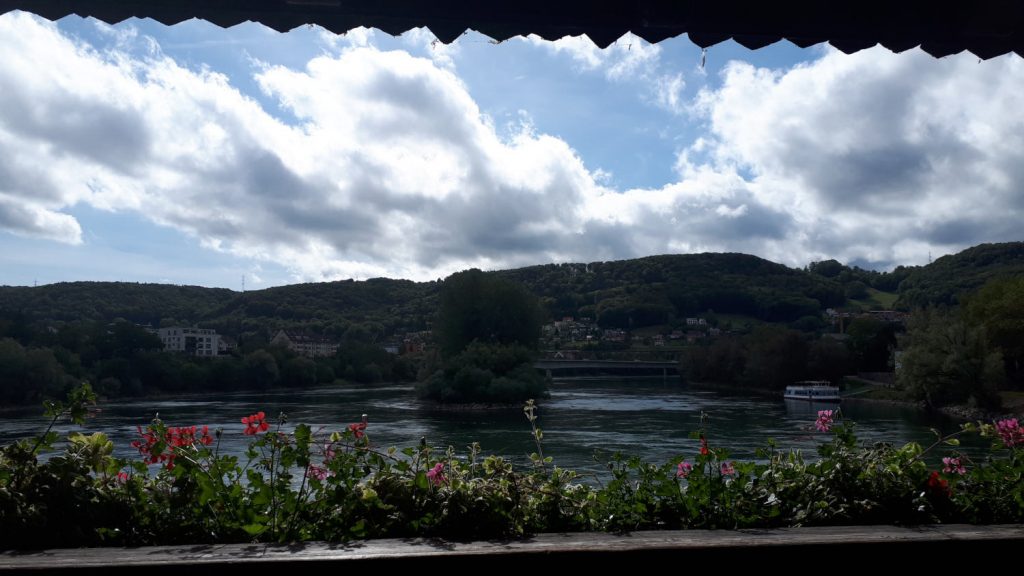 Views across the Rhine from the wooden bridge

We’ve been wowed, impressed and developed a great fondness for this great country and would love to return and tour some more.  So if we’ve loved Germany so much why are we leaving?  Well, we have a long-standing arrangement to be in Spain shortly for a good friend’s very special birthday celebrations. We did look at the option of flights but it was too complicated what with trying to find secure motorhome parking for Buzz at the same time so we’re on our way stopping here and there as we go.  It may seem like a long way to go for a birthday and it us but first of all she’s worth it and secondly we both love the drive. We’re going a route we haven’t been before and with France and Spain having so many scenic, hilly and mountainous areas it’s always a pleasure. After all that’s exactly what motorhoming is all about, to be able to go where you want, when you want. 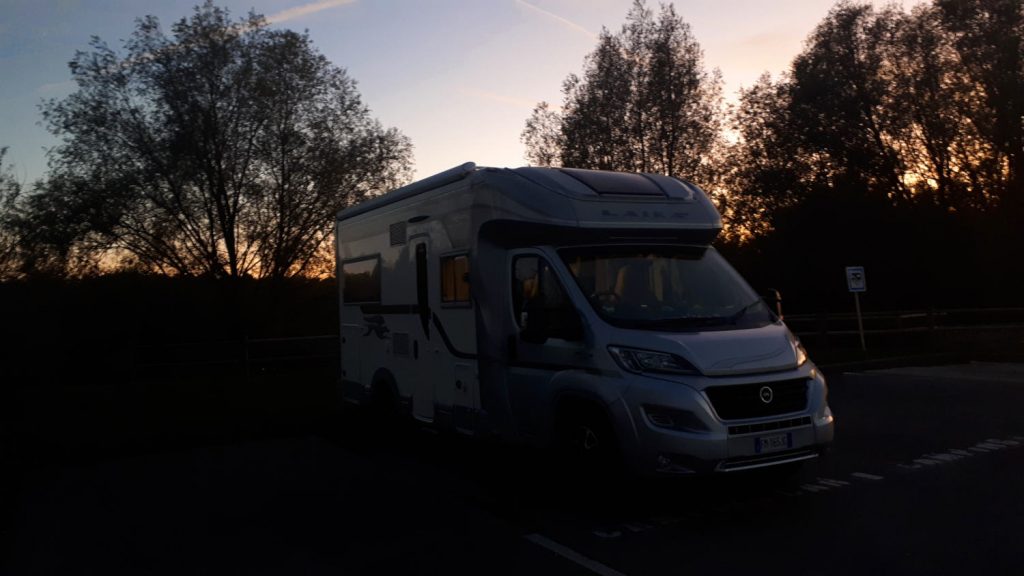 Parked for the night at Brognard, France

After crossing the Rhine to France didn’t exactly get a warm welcome and as we drove over the border in the afternoon we were faced with traffic jams, huge splashes from road water and torrential downpours!  It cleared eventually and we spent the night at a 3 place motorhome aire in Brognard, next to a fishing lake, but also quite near a busy road.  The ‘camping car’ aire was small but perfectly formed with all services except electricity and we were quite comfortable there.  Apart from a bit of traffic noise and a couple of barking dogs who’d been left in a parked trailer until quite late it was fine for one night and in the morning we moved on.  Our journey, now in sun, took us alongside the Canal du Rhone and the Le Doubs river, a very scenic drive, skirting around Bescancon and then arriving at the delightful town of Dole mid morning. 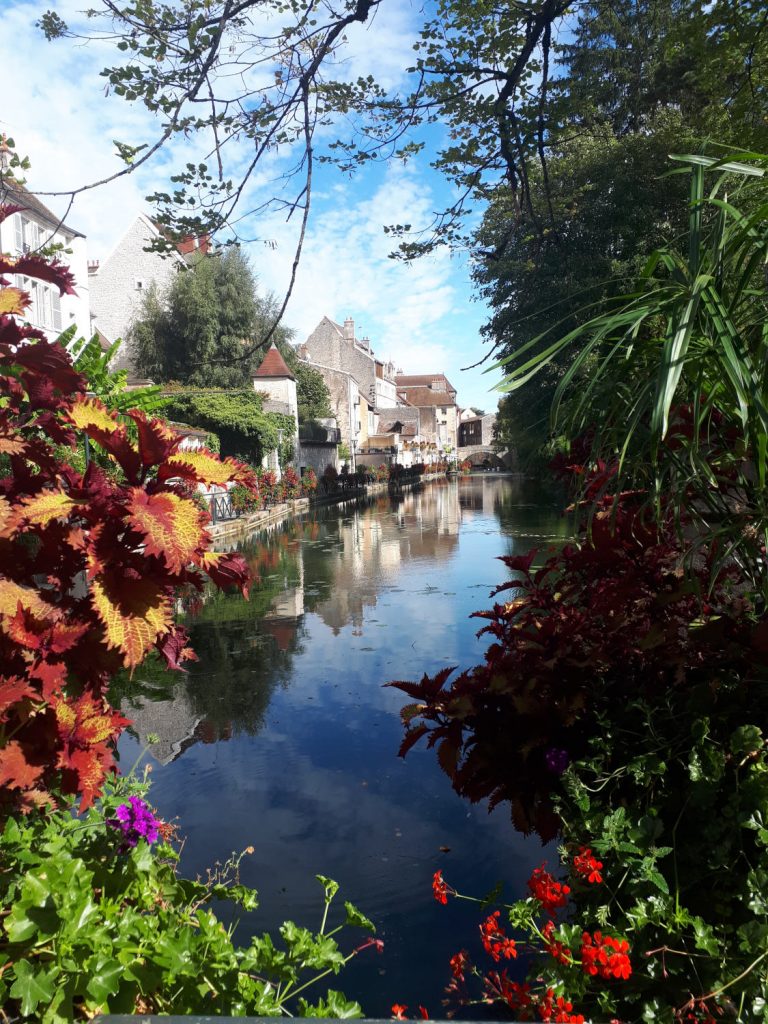 The Canal de Tanneurs running through the pretty town of Dole

The historic town of Dole is in the region of Jura and the Franche-Comte, was the birthplace of scientist and chemist Louis Pasteur and a designated ‘Town of Art and History’.   We were pleasantly surprised by this gorgeous little town, spread out along the limestone banks of the Doubs River.  There’s a huge car park right next to the river and just a short walk across to the town. 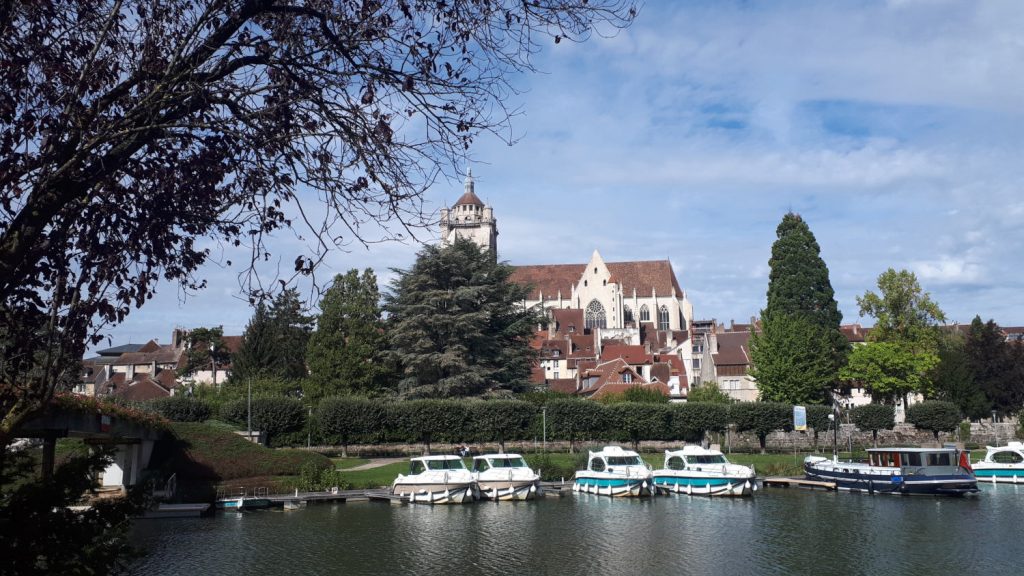 Dole just over the river Doubs

The town used to be the centre of the leather industry and Louis’s father was a tanner. We ambled along the pretty Canal des Tanneurs which used to be lined with tanneries and clearly not quite so scenic and sweet smelling as it is these days! An archway leading away from the canal takes you past a statue of the great man,  on to a small cobbled street, and to the green shuttered house where Louis grew up having been born in the town in 1822.   The house is now a museum dedicated to him and his life’s work. He later went on to have 5 children of his own and the death of 3 of them from typhoid drove him to science to try to find a cure. His discoveries saw him develop the technique of pasteurisation and the very first life-changing vaccines against rabies and chicken cholera. 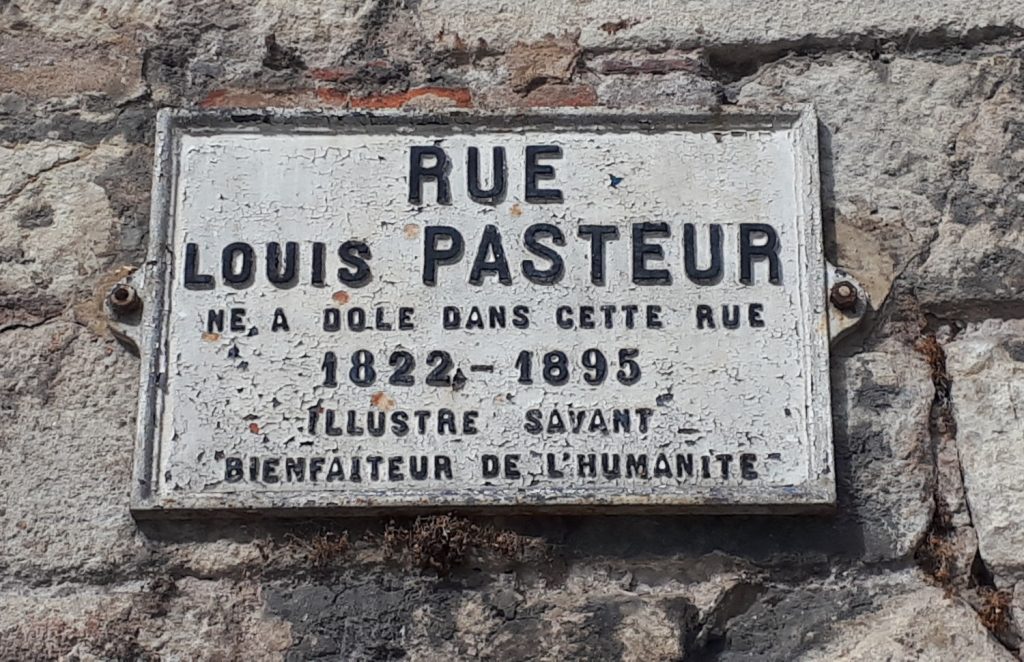 The street where Louis Pasteur grew up in Dole

Louis Pasteur must have been a very intelligent and wise man.  Not only did he make superb scientific discoveries, he is also noted for the following quotes;  “Wine is the most healthful and most hygienic of beverages.”  “A bottle of wine contains more philosophy than all the books in the world”.  Now who could argue with that?

Dole is a delightful little town with pretty bridges, the wonderful leafy walk along the canal and many historic listed 17th century stone buildings. The narrow cobbled streets give it great character and it’s hard to resist the temptations and aromas of the little cafes lining the canal.  If you look down on the pavements you will see little sunken brass cat plates, ‘Trail of the Perched Cat’ and you can follow these for a tour around the town taking in the most interesting sites.   A perfect little half day stopover. 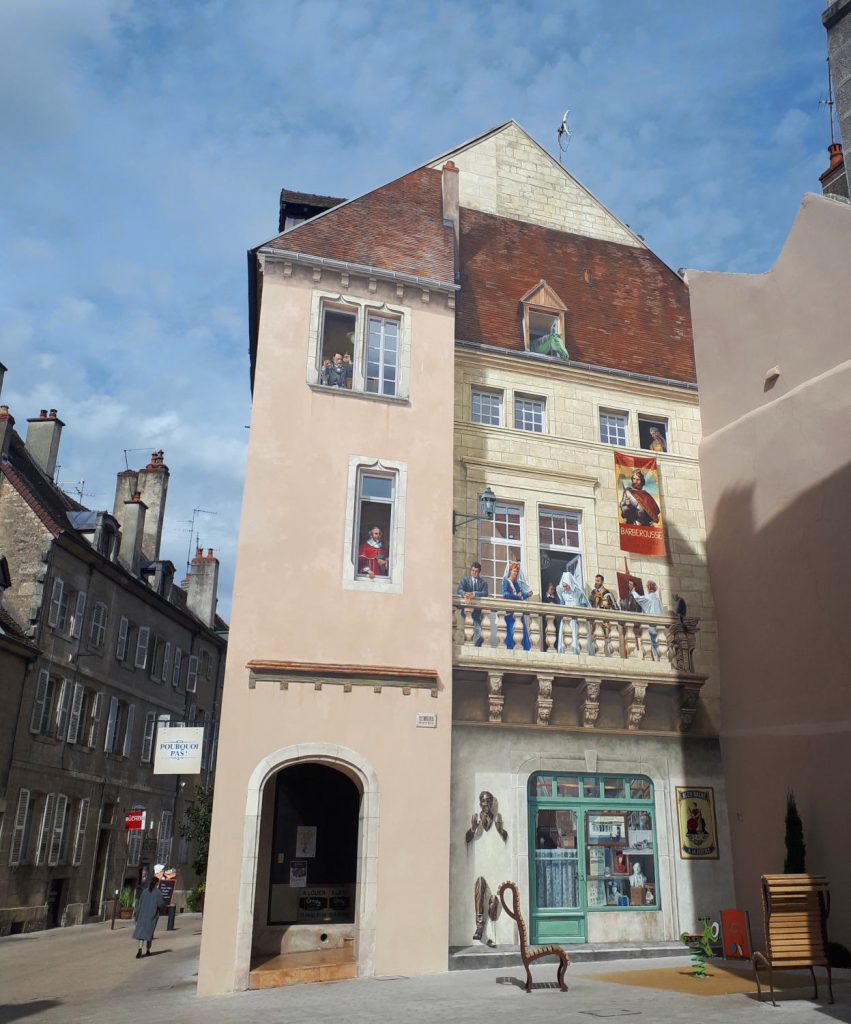 Moving on we spent a quiet night at Planfoy, (N45.3744 E4.44918), high in the hills and far away from any disturbances ready to continue the next day.