The Colour and Canals of Aveiro

The Colour and Canals of Aveiro

It was quite late in the day by the time we arrived in Aveiro. The Sat Nav had decided yet again to try to entertain herself by trying to send us down some of the tiniest streets she could find but we scuppered her plans and arrived unscathed despite her best efforts! We must admit it wasn’t the most attractive of parking locations, in a slightly ugly, uneven and partly flooded car park but needs must. It couldn’t have been closer to the centre of town though so the pros outweighed the cons and it wasn’t long before we were off and out for an initial exploration. 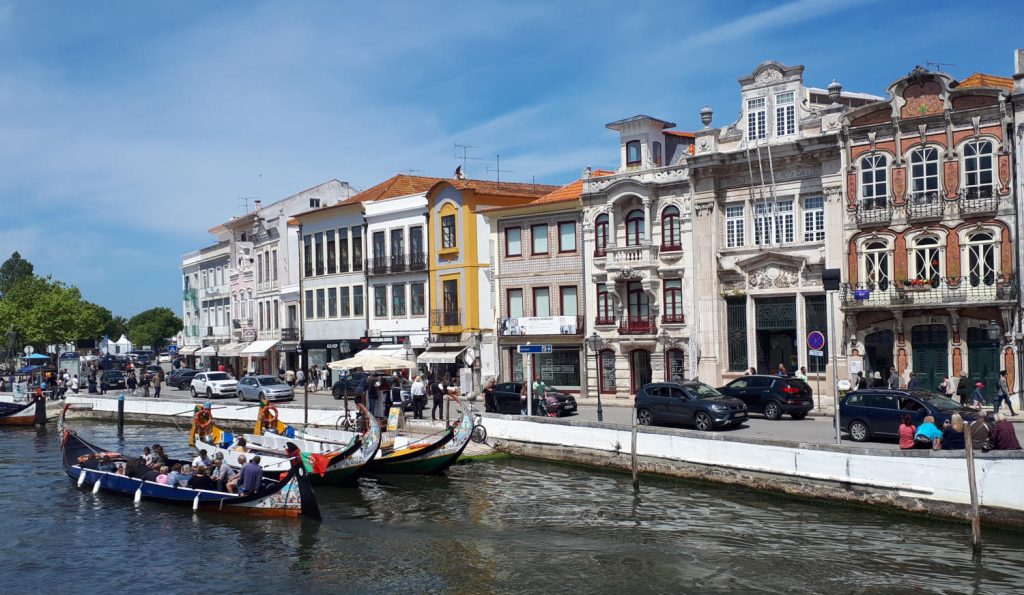 Aveiro nestles inland amid an area of coastal lagoons and saltpans stretching 40km both North and South. Not far from Porto on the West coast it’s a popular weekend retreat and it soon became clear why. Historically the town had a bustling port and thriving maritime fishing and salting trade but when the river mouth silted up and was damaged by storms in the 1500s the land was swamped. It wasn’t until 1808 when access to the ocean was re-opened that the town began to flourish again and canals were dug creating the small scenic network we see today. 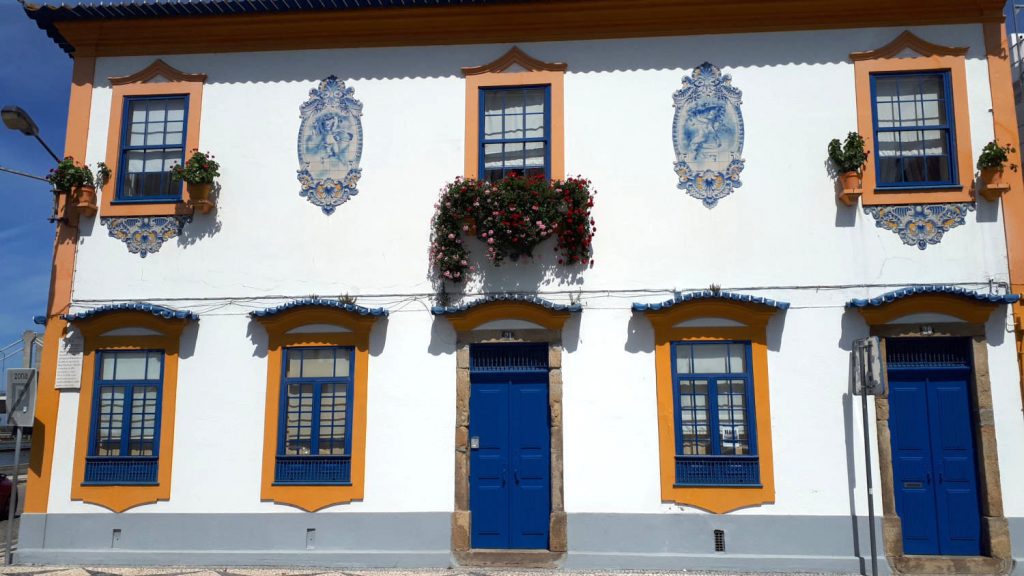 A striking building near our car park

Our first impression was that colour is all around here. From the candy coloured art nouveau buildings with iron railings and decorative balconies to the brightly painted barges cruising the canals. The streets and architecture immediately felt authentic, not just there for show or tourists and we liked it straight away. Tiled buildings clad with Portugese azejulos stand alongside renovated salt storage barns with cobbled pavements and pedestrian only areas making it a really pleasant place to stroll through. Sticking to the central part of town for now we wandered down past the Mercado do Piexe (Fish Market) where two canals fork away from a central square. 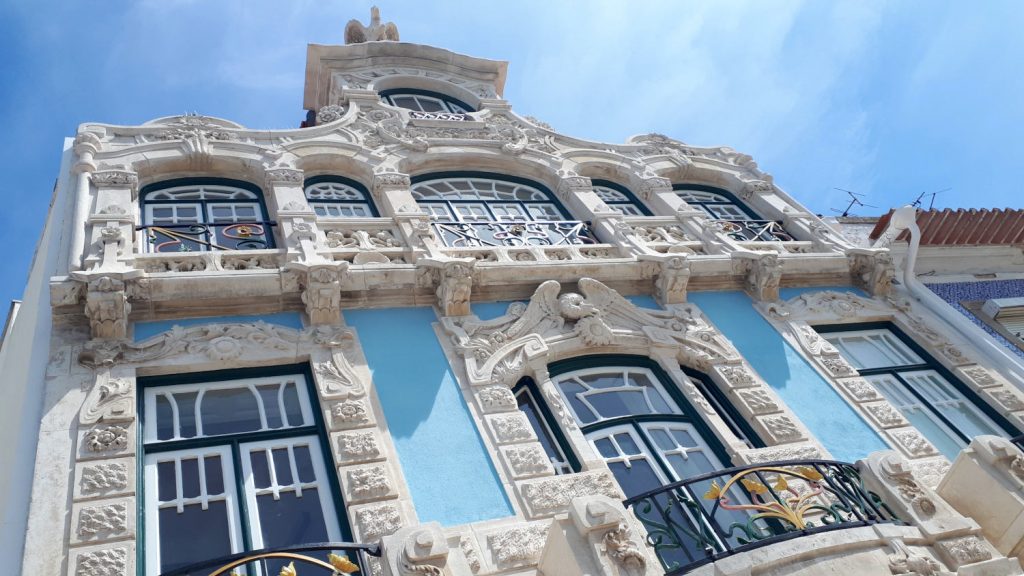 These two waterways are lined with small bars, cafes and restaurants specialising in shellfish and seafood and were bathed in the late afternoon sunlight, their bold colours reflecting in the water. It was all we needed to be tempted in to enjoy a drink at the water’s edge, watching boats drift by and enjoy the warmth and ambience. There’s a warm, social atmosphere here in Aveiro which invites you to relax and unwind and we did. We’d planned dinner back in Buzz but both fancied staying out. Having a further walk after our drink we found ourselves in another bar, swiftly followed by enjoying a rare dinner out in a cosy little restaurant with a tantalising menu we couldn’t resist – the motorhome meal could wait! 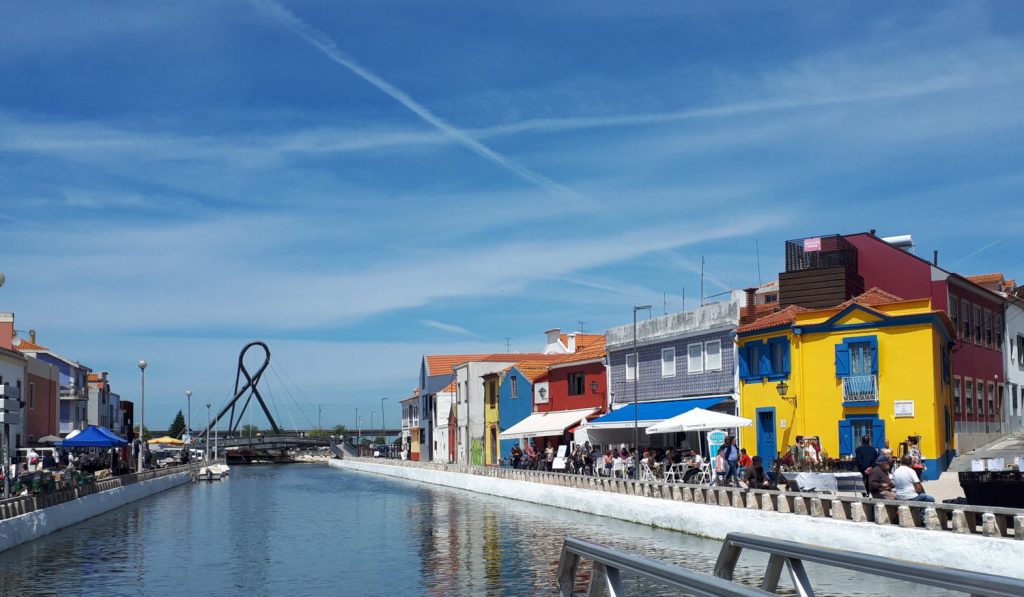 Paint pot colours along the canalside

Fog was all we could see when we woke up the next morning so we took our time getting ready and by 11am it had cleared. Walking through the town we noticed several roads cordoned off and runners on the streets. It soon became clear after seeing several more that there was a road race and we later found out it was the Marathon of Europe, a 42km run with over 5,000 athletes from 17 nations competing. At the end point we could see that they had set off at 8.30am and the runners coming in now were finishing at around 4.5 hours. The finish line was a welcoming sight I’m sure, set out in front of the 1910 Fabrica de Ceramica de Jeronymo Pereira building, an iconic old red clay building renowned for its industrial architecture. Later on we saw several of the competitors hobbling home through the streets, barefoot clutching their trainers, looking utterly exhausted. 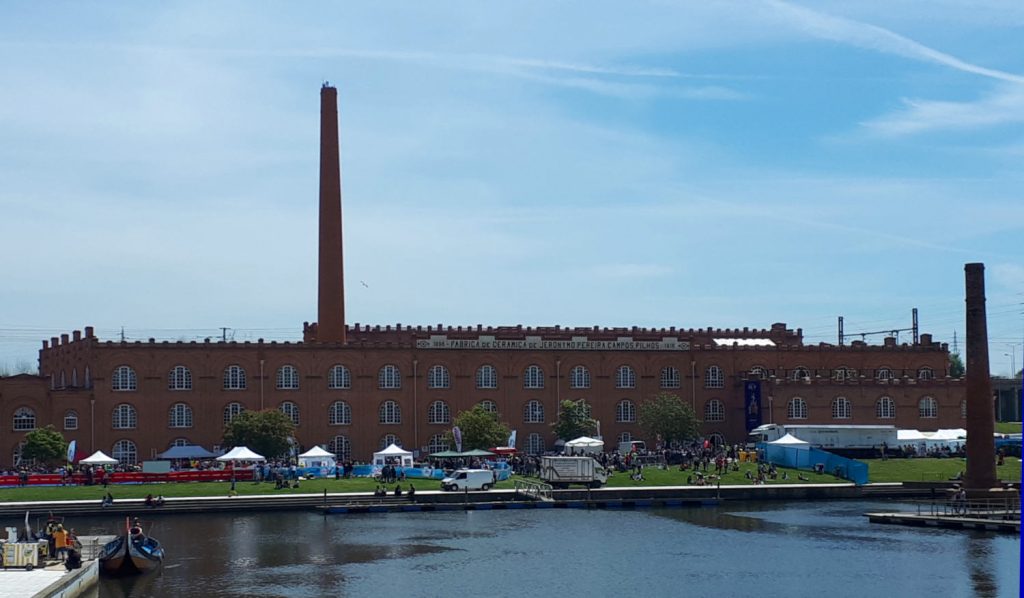 Back down by the canals we admired the boats a bit more closely. These traditional flat bottomed wooden boats (Barcos Moliceiros) were originally used to transport seaweed and clear algae from the waters but these days are purely for boat rides, taking tourists on 45 minute trips along the network. Each boat seems to be decorated differently, depicting colourful scenes of local life, flowers and birds. It was 10 euros for a trip but we preferred to walk the route and see the boats rather than be on one.

Several footbridges cross the canals and the ‘lovers’ bridge’ particularly stood out. Draped with ribbons, signed by couples, tied together and hung from the railings, they are meant to signify their everlasting love. They certainly looked pretty and flapped in the breeze as the boats glided by below. 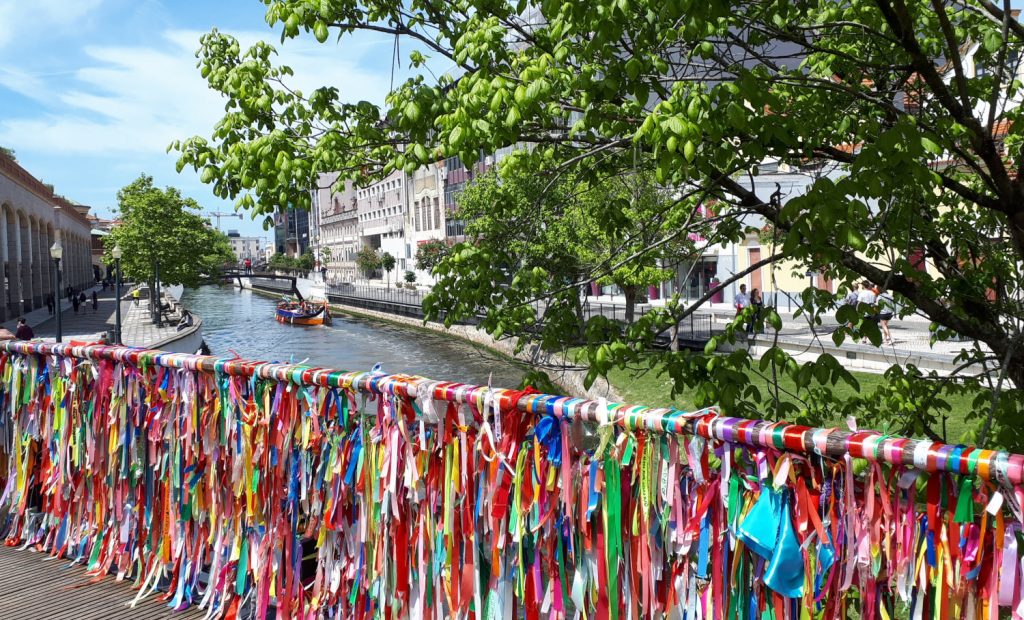 Just to add to the cacophony of colour there was also a huge open air street market which seemed to seep into each and every street. When the tables were full, the pavements came next, spilling over with everthing from pottery to pastries, bric a brac and linens. Some of the places we visit are quiet and almost like ghost towns on certain days. Not Aveiro though. It may be small but it’s a town bursting with life, activity and cheer. 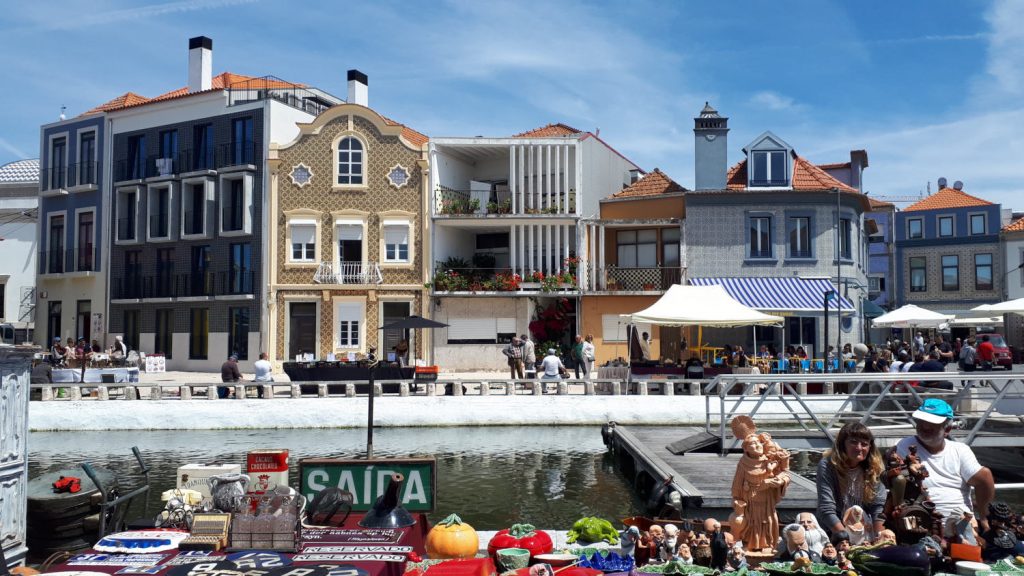 Whenever we visit somewhere new there always seem to be so many directions to go in. Left, right, up, down, sideways? We hate to think we might miss something so tend to say ‘let’s just look round that next corner’ which inevitably leads us completely astray and sometimes utterly lost. It does uncover some hidden gems though like the unusual blue and white tiled 17th century Mercy’s Church (Ingreja Misericordia) and an equally attractive tile clad building nearby. Many of the old buildings have retained their facades but are now used for completely different purposes like the 100 Montadito’s sandwich shop which is in a historical old shoe shop site. We also sought out the old station building which we’d seen a picture of online only to find it in a bit of a state. Hopefully it’s being renovated and not pulled down, returning it to its former charming Portugese glory. We did come across some unusual art pieces too which seemed to have a bit of a theme about feet! 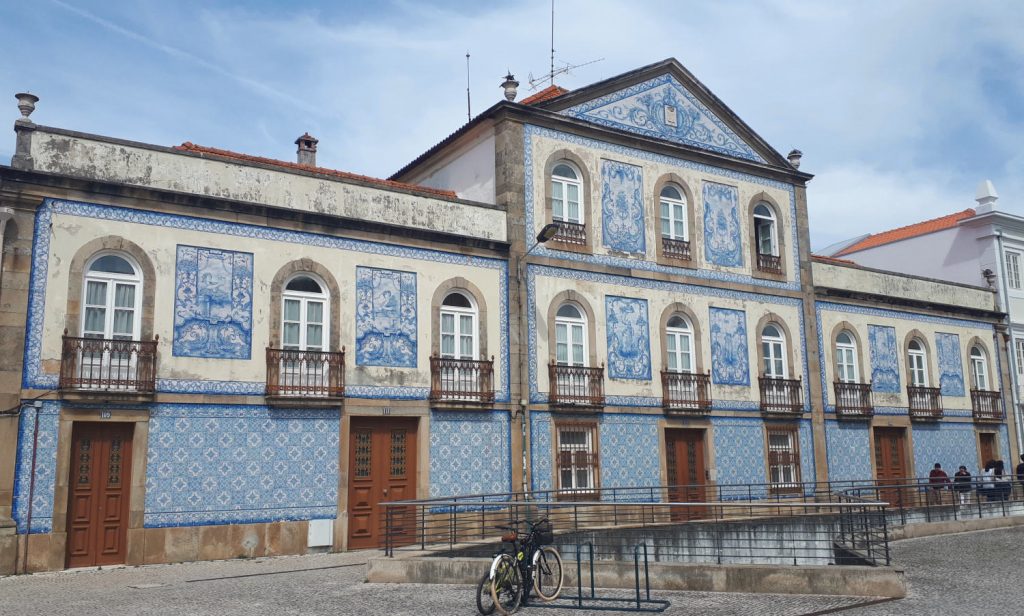 There’s one more thing Aveiro is known for and that is its local delicacy, Ovos Moles. These speciality shell or boat shaped sweets were created in the convents in the 15th and 16th century and as with all of them are largely egg based. The consistency is very unusual though and supposed to resemble a softly boiled egg, wrapped in a very thin layer of rice paper. We’d tried them before in Lisbon and they’re very nice but we resisted on this occasion. Although very small they are complete sugar bombs so one or two is enough – even for us!