Our guide book promised us breathtaking beauty awaiting us in Avigliana so we drove there with great anticipation and parked in the aire, had lunch and got the bikes out. The sun was shining and we set off to the lake we knew was somewhere nearby with great expectation.  Cycling downhill we noticed a few people clutching beach towels and picnic bags walking in a certain direction so took it as our cue to go that way too and soon found ourselves following a small winding slope leading down to the lake’s edge and an open green area where people were sitting enjoying the lake view and warm sun. 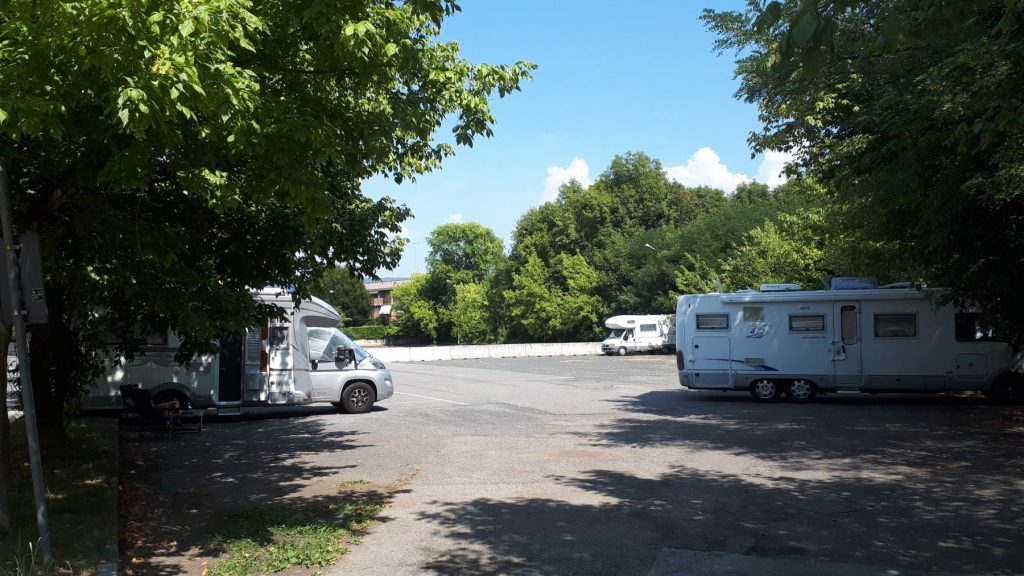 Planning to cycle around the lake we carried on until we saw a ”no bicycles’ sign so our plan was scuppered and we had to dismount, chain up the bikes and carry on by foot.  The lake itself was very pretty but not in the same league as many we have recently seen.  Unfortunately within about 10 minutes of our arrival we heard distant thunder which suddenly became very close thunder which then became a downpour.  A sudden rush of activity saw everybody rushing about snatching up their towels, picking up their picnics and retreating up the hill to stand under a tree or make their escape back to their cars.  Carrying a camera we were keen not to get wet, we hurried back to our bikes and decided to head back to the van because the sky was by then completely grey and not looking like it would clear any time soon.  That meant struggling back up the hill getting drenched in the process and by the time we arrived back we were laughing and soaking wet!   The rain carried on all night so that was all we really saw of Avigliana because we didn’t feel like doing it all over again the next day. 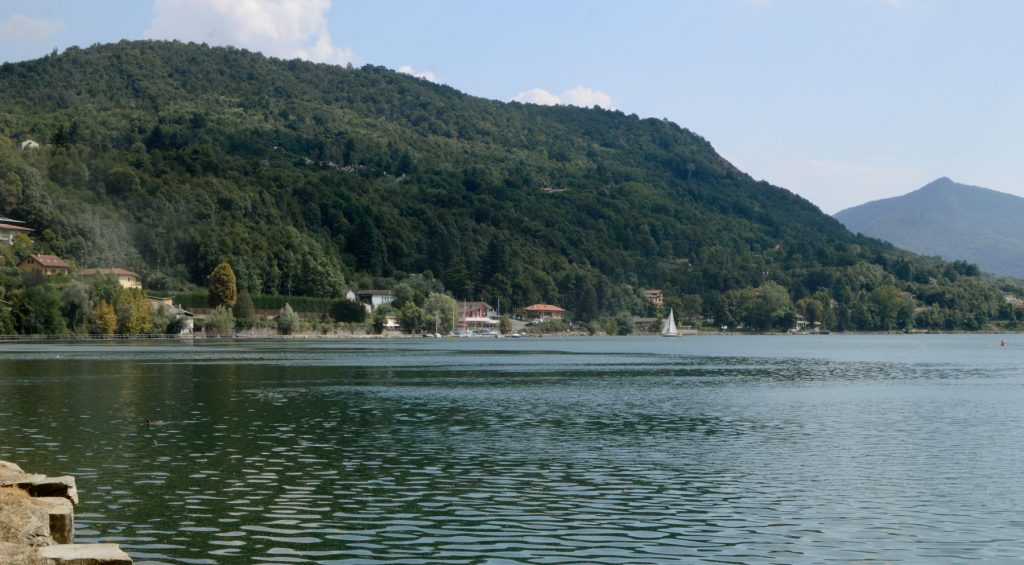 Instead we decided to investigate the large abbey complex high up on the hill that we had seen in the distance.  After a short 5 minute drive we arrived at the bottom of the hill that would take us to the Sacra di San Michele, perched on the rocky summit of Mount Pirchiriano at 962m above sea level on the edge of the Susa Valley.  Just a 12km trawl up the twisting hillside road to the top to negotiate first ….. Luckily it is one way only for larger vehicles with the exit being a different route down the other side, so although we had to pass the odd car on the narrow bends nothing too onerous came down towards us going the other way and Buzz was more than happy wending his way up the hillside.  We bagged a nice parking spot just the right size for a 7m motorhome, locked up and walked the rest of the way up the road. 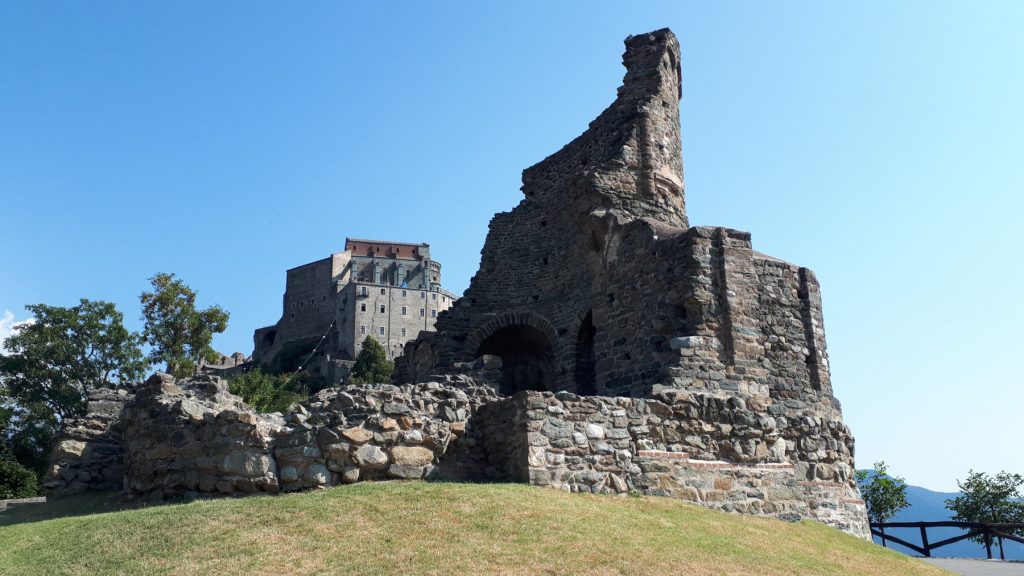 An imposing abbey complex dating back to the 10th century, the site starts at the roadside with a pleasant sloping walk up a fenced pathway offering teasing views and snatches of landscape through the trees, hinting at the wonderful views on offer at the top.  Once a wealthy powerhouse in religious terms, in the past it controlled over 100 other abbeys across France, Italy and Spain, being an important centre of spirituality and safe haven for pilgrims headed to Rome.  Indeed it is still one of the most extensive Romanesque architectural complexes in Europe.  At the top of the path the site opens out and we could see far reaching views of the Susa Valley beyond, but we weren’t there yet ….. 154 more steps hacked out of the hillside had to be climbed first! 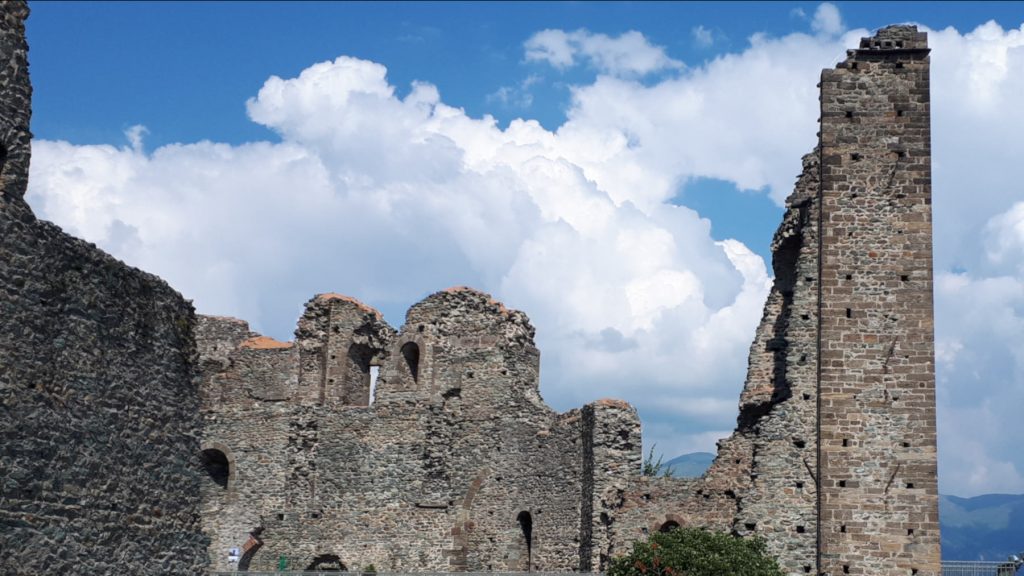 Having bought our tickets for 8 euros each we were greeted by the statue of the Archangel Michel with welcoming open arms and the devil’s wings at his feet. The fortress loomed above us and we continued our climb inside ascending the invitingly named Stairway of Death (Scalone di Mort).  The most precious work of art in the abbey resides in the masonry at the top of these stairs – an intricate carving depicting the creatures and symbols of the zodiac – the Porto dello Zodiaco. 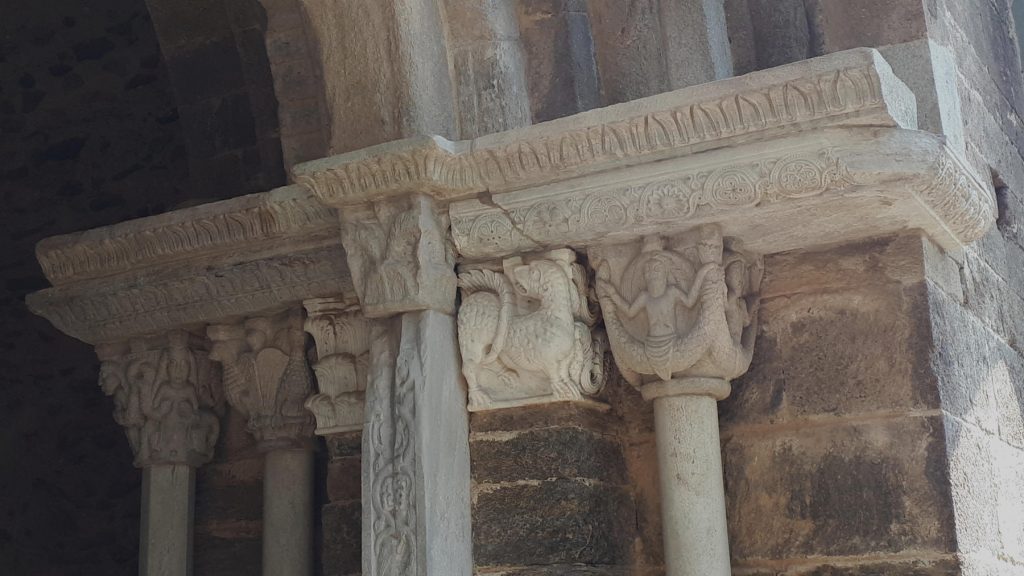 Next we passed under  flying buttresses to reach the church which dates from the 12th to 13 centuries and contains the tombs of the early dukes and prices of Savoy-Carignano and an interesting combination of Romanesque and Gothic architectural styles.  Some of us wanted to take the weight off our minds and made a beeline for the confession box to admit the level of cheese and wine consumption having taken place of late! 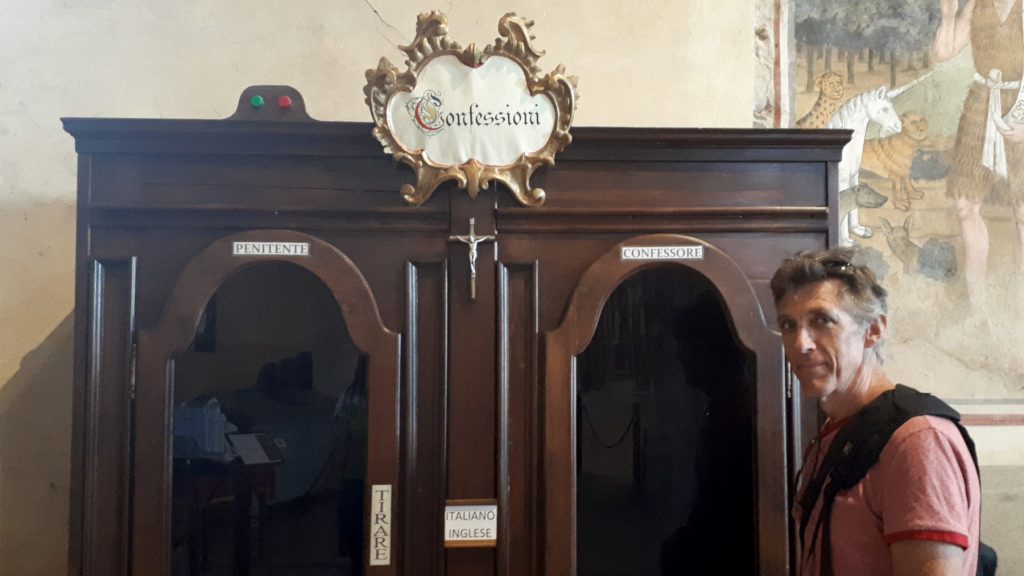 Once forgiven we carried on through the Monk’s door to the outside terrace and fabulous views of the remains of the new (12th-14th century) monastery and The Tower of the Beautiful Alda. 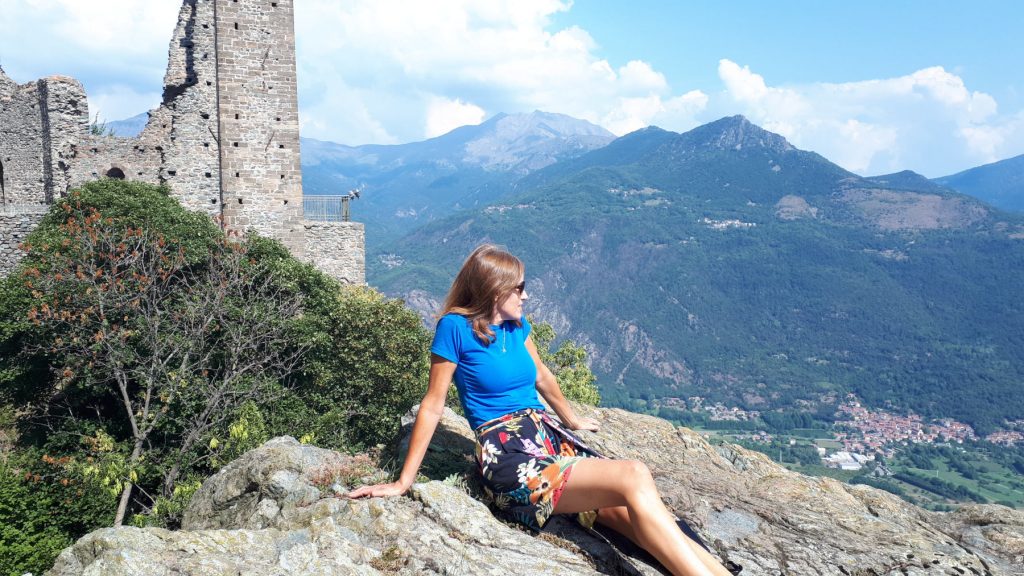 The site has been destroyed by bombings, earthquakes and war over the centuries and has been rebuilt in part and extended over the centuries leading to its current state today.  The drive and climb are well worth the effort for the wonderful views at the top and interesting site – all in all a well spent couple of hours and a worthwhile place to go if you’re nearby.