On our journey from Lille to Aarchen we found a free motorhome aire at the small Belgian town of Blegny not only that but it was at Blegny-Mine a UNESCO World Heritage site and one of only 4 mines in Europe with accessible underground galleries where you can take a guided tour. The aire itself is in the mine carpark and has plenty of space, free services and 12hrs of electric for just 2e, we arrived late in the afternoon parked up and got Buzz sorted for the night before heading off to have a look at the mine. 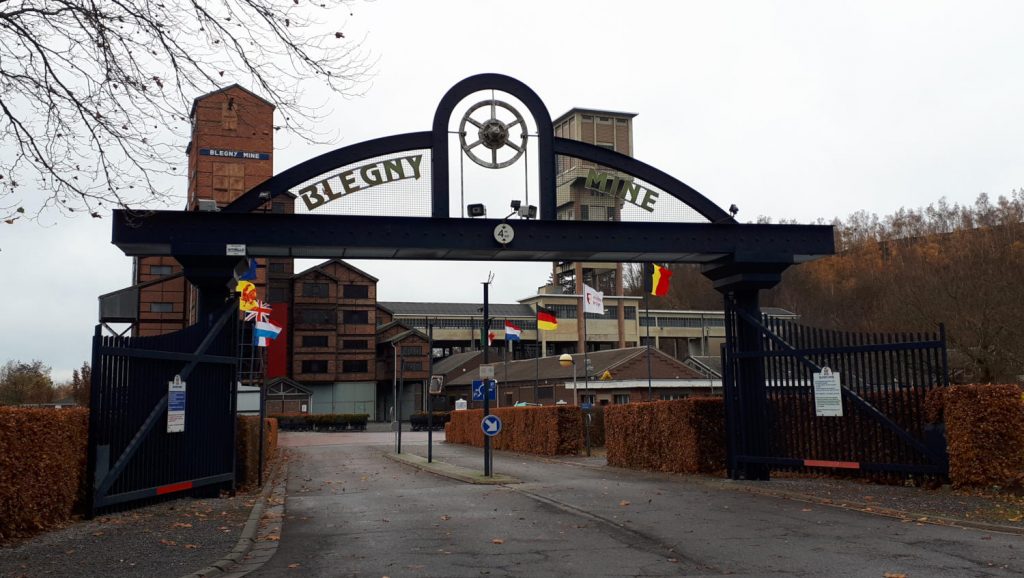 Arriving at reception we asked when the next available tour was only to be told February, so we were a bit early then! However the helpful ladies at reception asked to wait while checking something and as it turned out they had a small French group booked in for a tour the next morning asking if we would like to join them, which we did. So at 10am we joined a group of 7 French women and 1 man for the 2.5hr guided tour, as the tour was in French we were provided with an English audio guide each.

The tour started with a short film documenting the history of coal in the region going through to the mine closure program in which all the Belgian mines were closed down with the last mine at Blegny (Argenteau-trembleur) closing on the 31st of March 1980, however the forward thinking Provincial Governor decided it should be saved as a visitor experience and so only 2 months after mining ceased the first visitors arrived. The mine was recognised along with 3 others in the region as UNESCO World Heritage sites in 2012, we are lucky enough to be among the last to visit in 2018. Moving from the theatre to changing room we are issued with a protective jacket and helmet for the tour before being led outside by our guide. 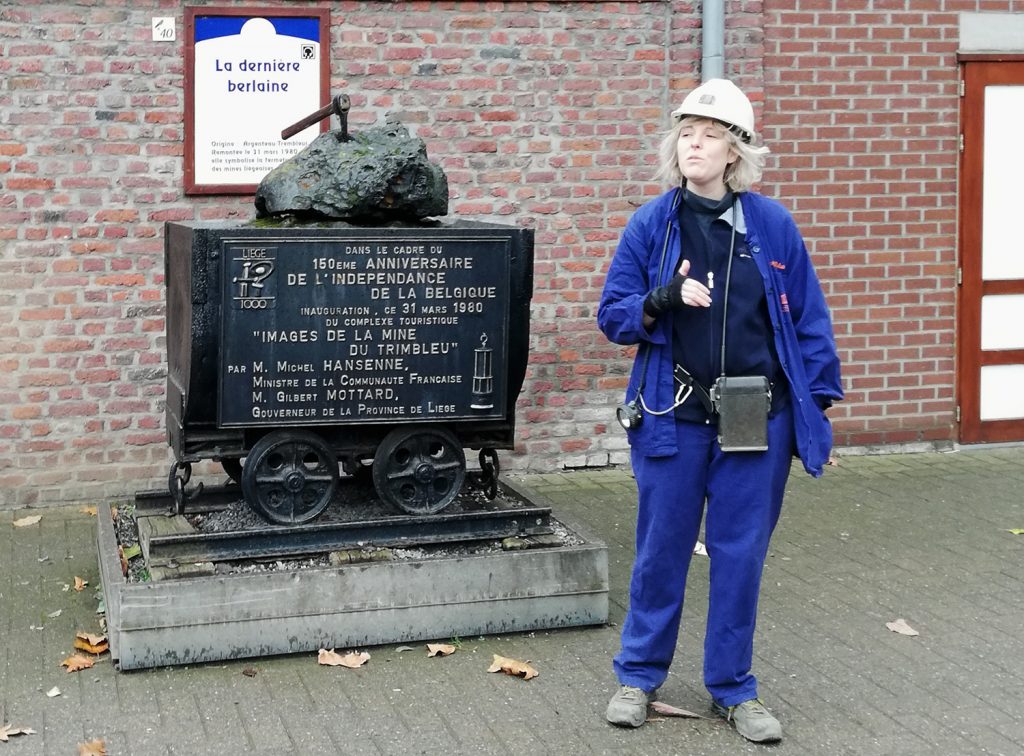 The tour proper started with a safety talk and brief overview of the mine during which we are pointed in the direction of little numbered signs for our audio guides, before being led to the original mine lift for our descent into the mine. The cages are tiny with all of us crammed into one cage before being plunged into darkness as the lift descends the 30m into the first tunnel where a second safety briefing is followed by a walk through of mining practices with information boards and pieces of machinery from the original mining operation. As we move deeper into the mine you start to understand just how tough a life the miners had down here, even now the mine has to be pumped constantly to stop it slowly flooding. Just before we reach the coal face we pass a set of steep concrete steps disappearing into the darkness below (our route to the tunnel below) before us we see the seam of coal angling down to our right gleaming in the dull light, there is also a large chain winch used to haul sleds loaded with coal from below. 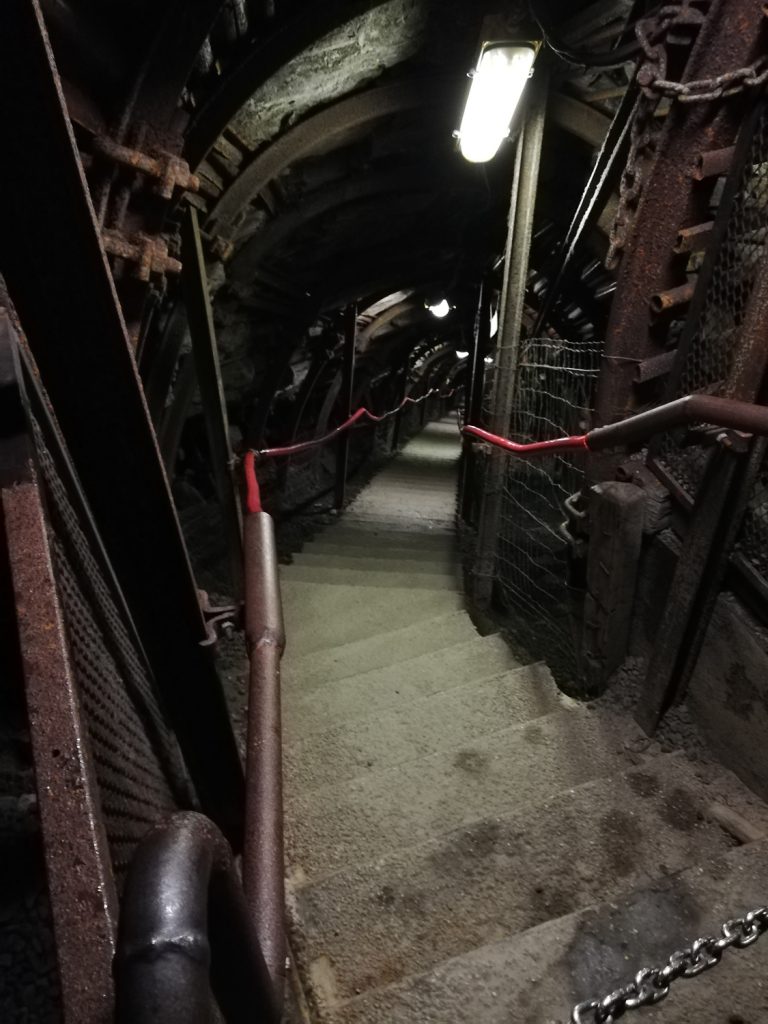 Between the nice tourist steps and the coal face is cut a slot angled down alongside the steps just 60cm high (2ft in old money) and just around 15m wide (the face is collapsed behind the workers as it would be impossible to support) littered with pit props and large blocks of wood, this slot is where the face workers spent their day hacking away at the seam of precious coal working it behind them onto the sleds propping as they go. Make no mistake there is no room to kneel never mind stand, they stopped to eat their lunch and take whatever breaks they need in the slot, going back down to get out was not an option too much time lost, they only got paid for what coal produced. 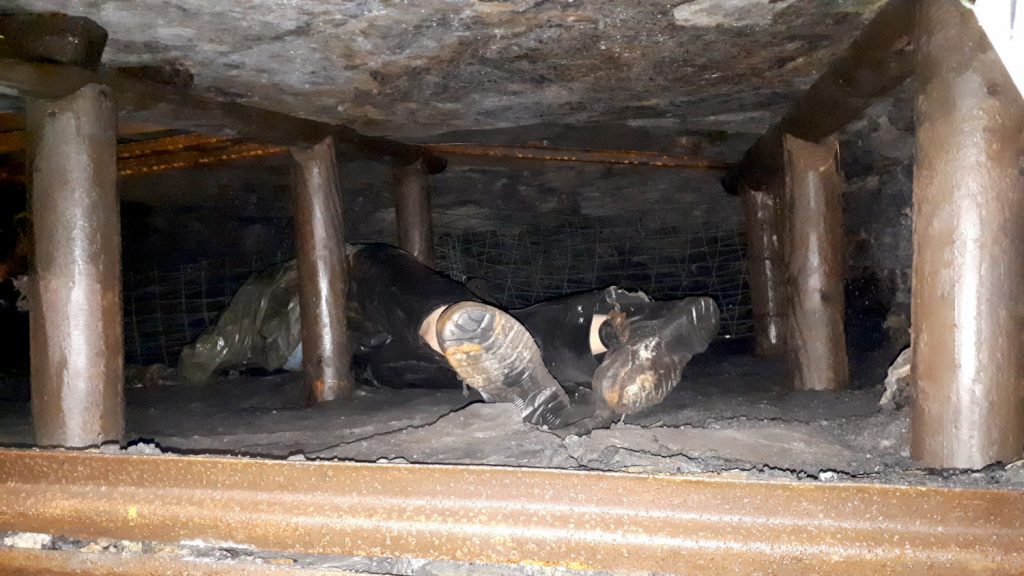 From here we head down to the lower shaft which mirrors the upper shaft in distance and is essential for getting air into and waste gases out of the coal face it is here looking up into the seam that we realise just how confined it is. Moving on we get a demonstration of the drilling machine used for drilling the holes for explosives for extending the tunnels which tracks the seam of coal. The noise is tremendous and that is just one drill, we see many other pieces of equipment, the coal trucks and compressed air piping all creating noise and danger for the mine workers. We eventually head back up the lift to the pit head and coal sorting area, much more appreciative of the risks below ground the dust, gas (firedamp – Flammable gas found in pockets in the coal), water and other natural risks. 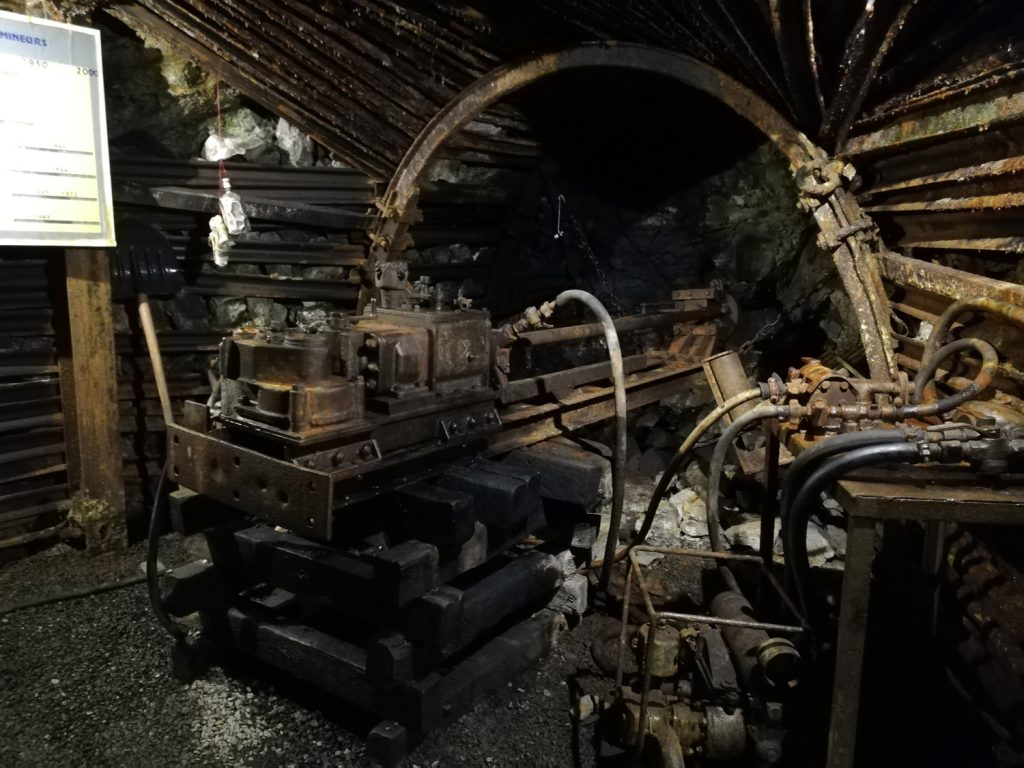 As we rocket 80m up in the cramped lift to the coal sorting area about 20m above ground we are shown the many ways the coal was sorted into size and quality, again an incredibly noisy are. Finally we watch a short poignant Son et lumier in one of the machinery rooms before heading back down and out ending what has been a fascinating insight into the working lives of the coal miners. After a tour like that you have to ask yourself why they were so upset when the mines closed but that is the thing when you reflect you realise they were just like any other organisation that requires teamwork and utmost trust in your fellow workers to ensure you went home after your shift it’s a collective belief and understanding, a family bound by a single aim to provide for and go home to your own family.