Next up as we passed through France we stopped at Le Puy en Velay – the home of the Puy Lentil.  The same French green lentils can be grown elsewhere but this area’s volcanic soil laced with lava rock gives the lentils a superior gastronomic quality and characteristics which cannot be matched so they can only be called Puy lentils if grown here.  I don’t imagine the average person would be able to detect the difference but maybe we should do a taste test to find out! Either way it’s always so interesting to see where a particular food is grown or produced. Next time we’re at home eating Puy Lentils we’ll be reminded of this place. 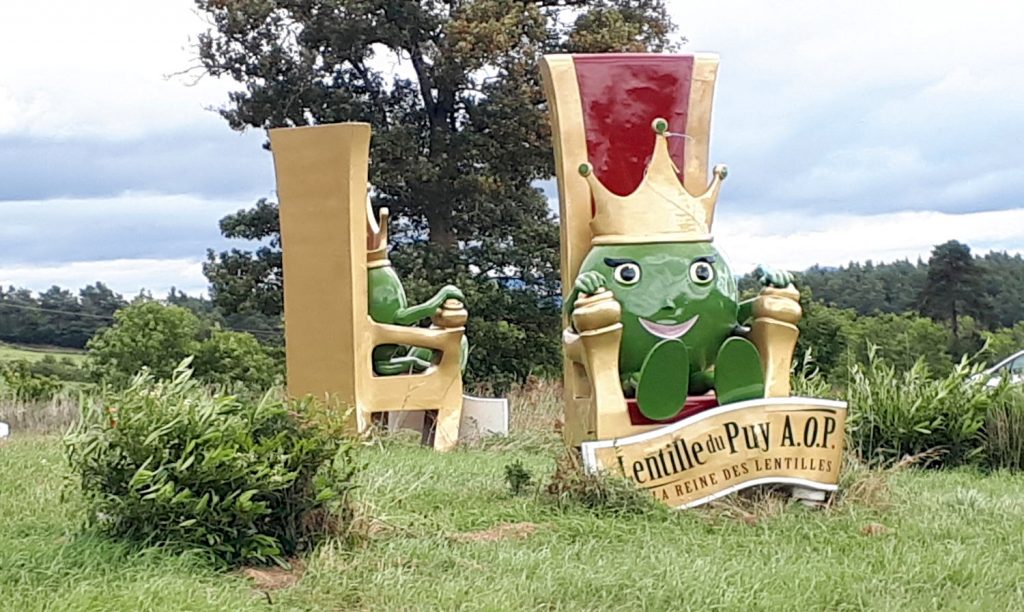 The town has another string to its bow though and one that probably draws more visitors than the lentils do.  The town was once the 10th century gateway to the Santiago de Compostela pilgrimage trail and has a UNESCO world heritage listing for its 3 historic buildings built atop volcanic cones. Puy means ‘peak’ and these 3 buildings are most definitely on the peaks. 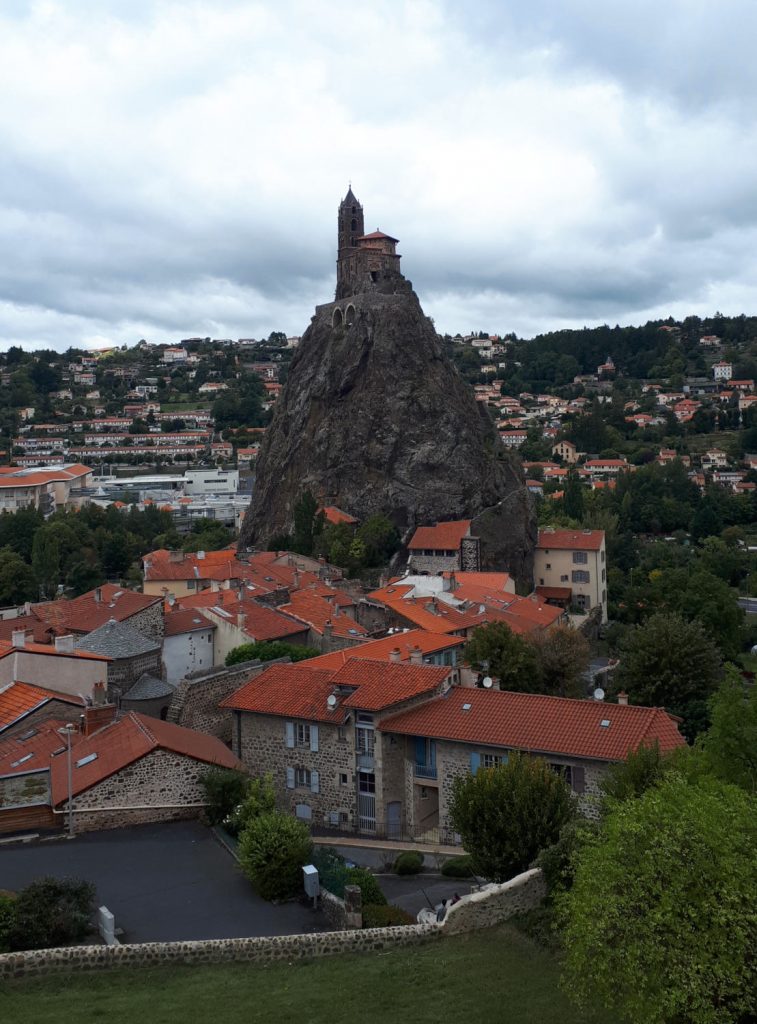 There’s a perfectly placed motorhome aire right underneath one of them , the 10th century St Michel d’Aiguilhe (the needle) chapel improbably perched on a peak high above. 268 steps gets you to the top for fabulous views of the surrounding area.  The small stone chapel at the top is cosy and intimate with painted frescoes and low ceilings. 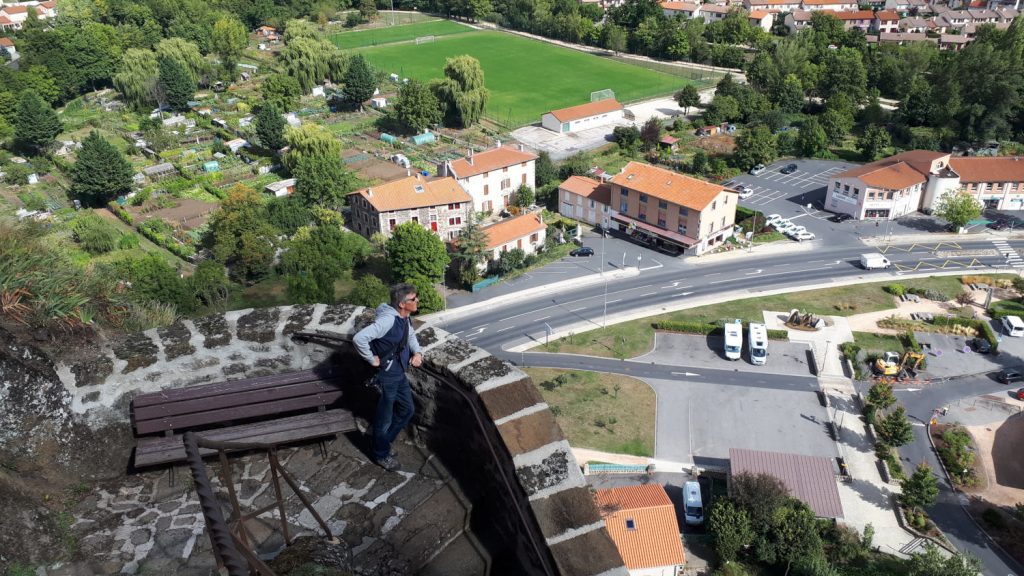 Buzz Laika down below in the motorhome aire with another van

We were only there for a short visit but if you have more time there’s also a 1860 Statue of Virgin Mary atop another volcanic cone and the 12th century Romanesque Notre Dame Cathedral on another nearby.  All 3 a good uphill walk of course! 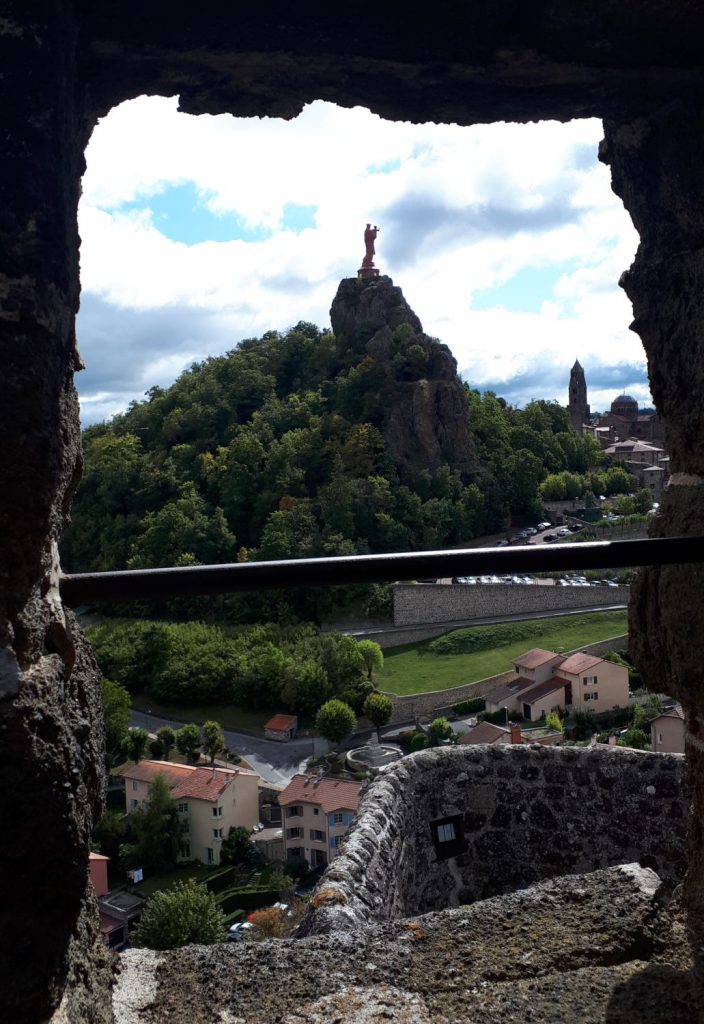 Moving on, we headed South to Albi, northeast of Toulouse, our target the massive UNESCO listed Saint Cecilia’s Cathedral of Albi.  Built in 1265, it’s  the biggest brick built cathedral in the world and the largest painted cathedral in Europe containing some of France’s oldest and largest frescoes and decorations which cover an astonishing 18,500m2!  The huge, austere exterior and its steeple tower up to a height of 78 metres.  It imposing, solid bulk looks more like a defensive fortress than a place of worship and it was built with the intention to impress and intimidate.  Overall it has a length of 113m and width of 35m. We were surprised to find it was free to go inside except for the choir area which is unique and costs 5 with audio guide. 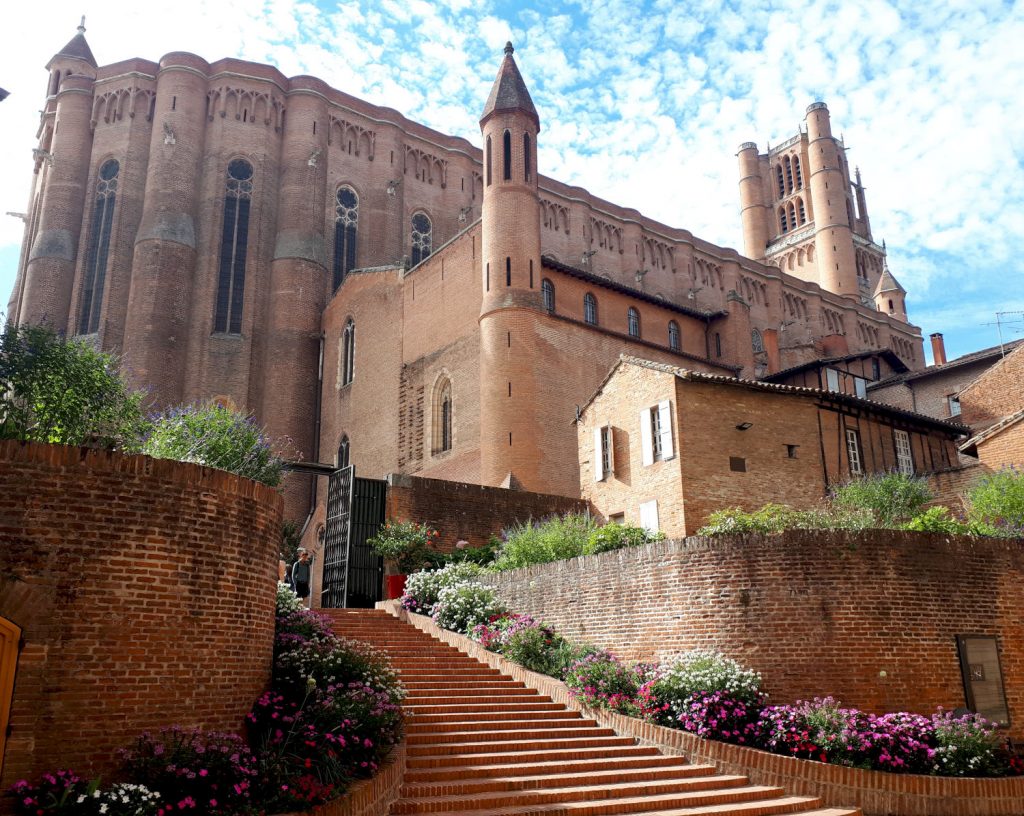 There are a couple of busy streets near the cathedral stuffed with eateries all competing to win you over with their Menu du Jour. They certainly looked and smelled tempting with Veritable Cassoulet du Maison seeming to feature quite heavily. We did drool as we walked by tables full of hungry people wolfing down huge forkfuls of it!  Lunch out wasn’t on the agenda for us unfortunately but we did pop into the covered market hall and buy a couple of regional speciality pastries. Eschaudes are little scone like cakes flavoured with anise. The taste was really good but they were very dry and hard as bullets! A good dunk in a cup of coffee would have been ideal. 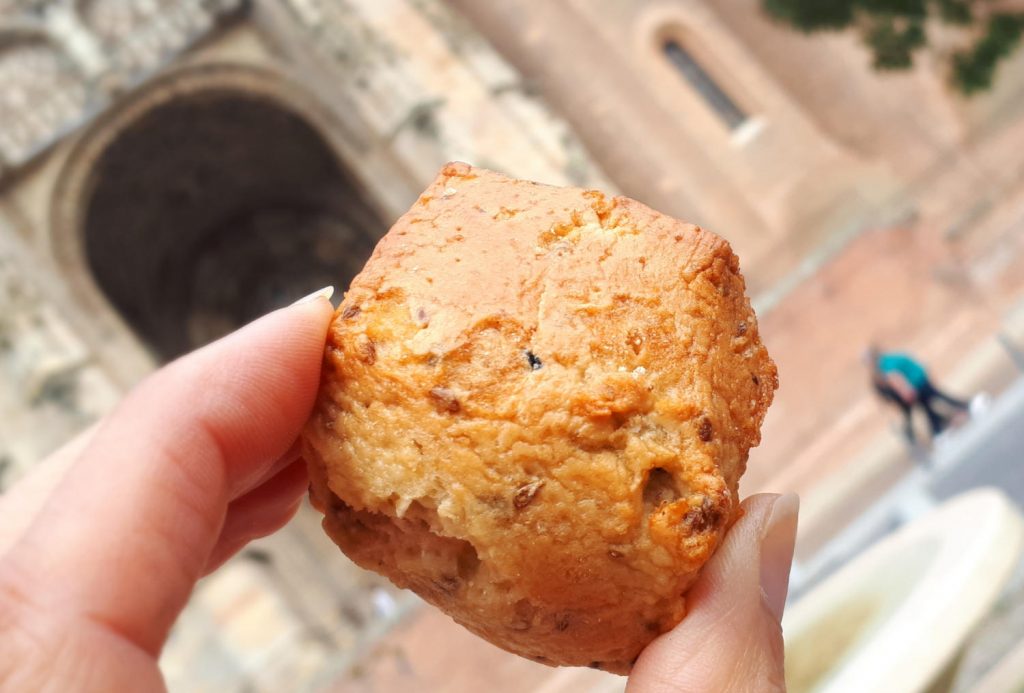 We really only stopped to see the cathedral and weren’t prepared for the stunning riverside setting. The warm pinky orange tone of the buildings contrasting with the gorgeous green of the river and foliage made for a masterpiece any artist would be proud of. We could have spent hours here just wandering and gazing at the view and if you get the chance to come here you will too.  The Tarn river at Albi is home to cat fish which have learnt to catch and eat pigeons, as they bathe in the water!! We saw one come close but missed any feeding so if you are here and the water is high enough you might be able see them from the bridge which incidentally was built around 1040 and is one of the oldest in France. 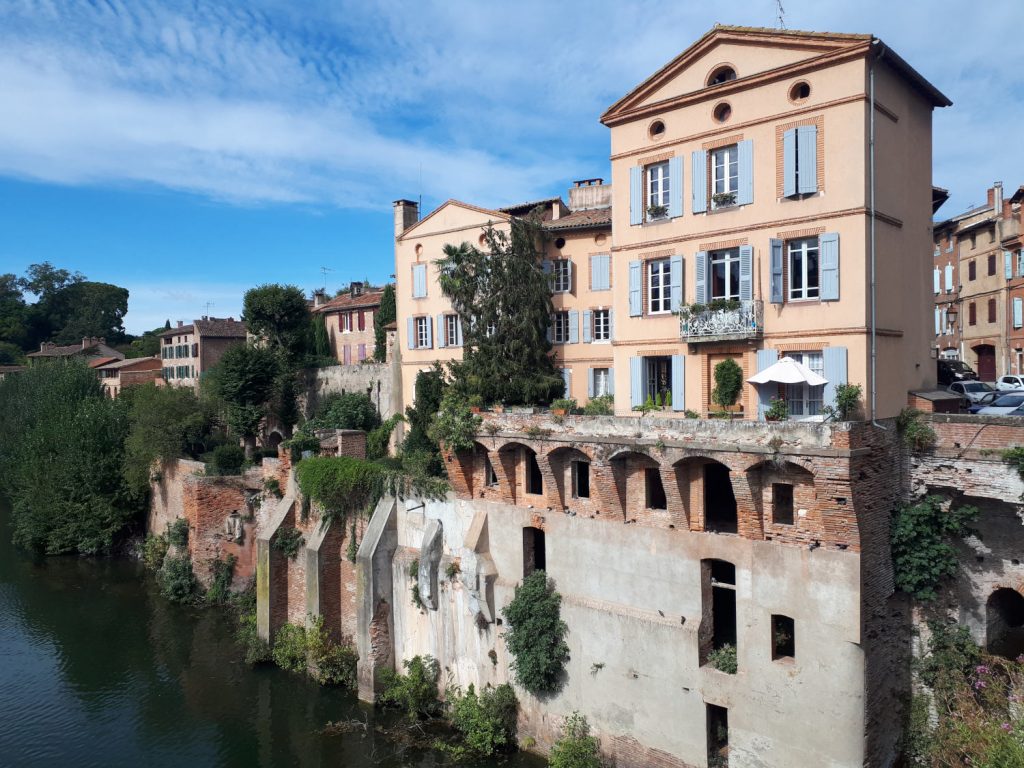 If you’re interested in art you might like to visit the Musuem of Toulouse-Lautrec, the artist well-known for his famous Moulin Rouge posters. It houses the most complete permanent collection of his works plus canvases by Matisse, Duffy and Yves Brayer.  It was closed for 2 hours as we got there so we didn’t go in.  Walking around the back of the museum we came across a beautiful, colourful formal garden with the most wonderful view of the river beyond. 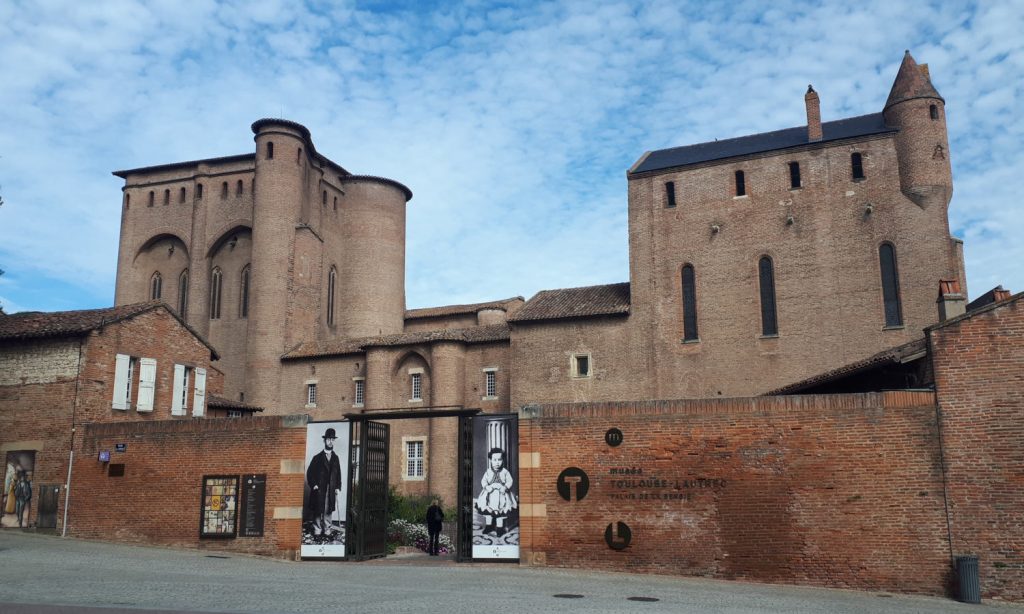 Entrance to the Musuem of Toulouse Lautrec

The nicely landscaped motorhome aire looked very different from the image in the All The Aires book so we were pleasantly surprised. It’s very flat, spacious and well laid out and you could very comfortably spend a couple of days there. 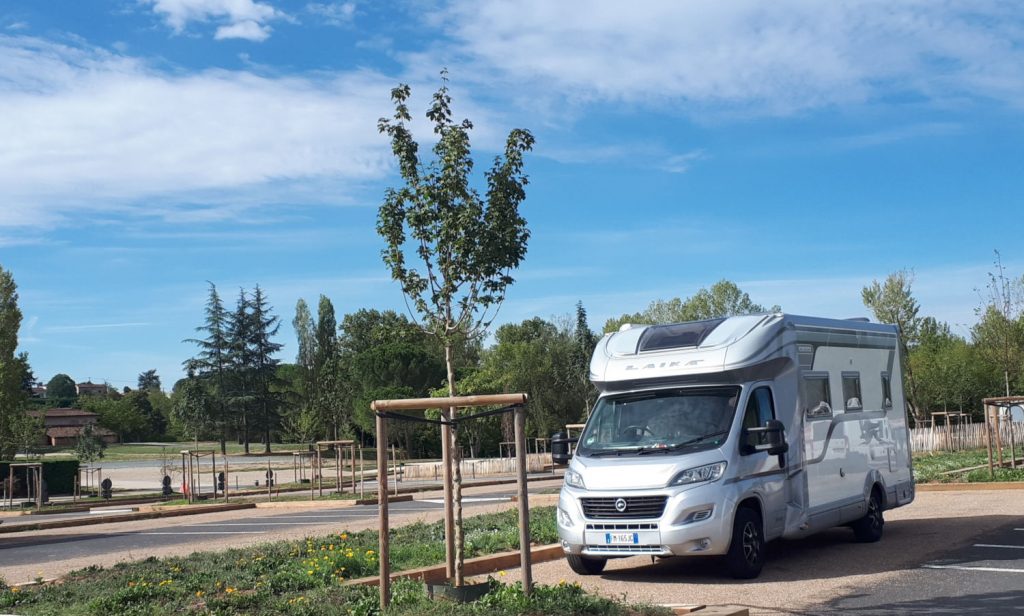 Buzz in one of Albi’s two motorhome aires – we couldn’t get to the other one over a 2.5 ton maximum bridge

The medieval Cite de Carcassonne had been on our to visit list since the start of our trip last July and we finally made our way there after Albi.  It dominates the landscape with its rising tall towers and turrets, strategically sited above the River Aude with 360° panoramic views.  There is plentiful dedicated motorhome parking at Chemin de Montlegun (N43.205429 E2.373793) provided just a few minutes away so we parked there clocking up a charge of €6.50 for 3 hours which wasn’t too bad given the convenienct location. On approaching the site the sheer immensity of it is immediately clear, the two sandstone towers standing proudly either side of the entrance. Along with two portcullises, two huge iron doors, a moat and a drawbridge the defences are suitably imposing. 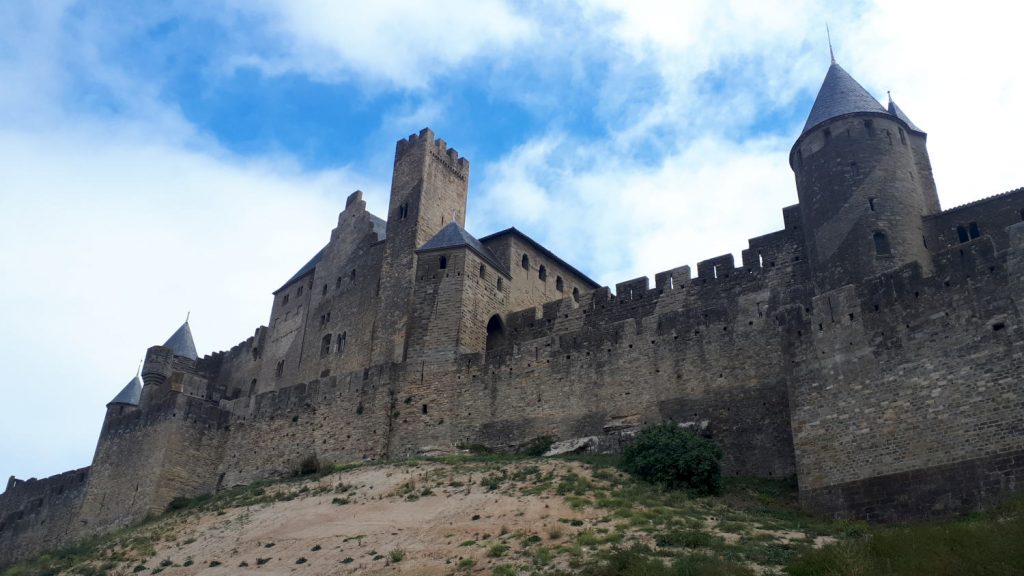 The unmistakable ramparts of the giant Carcassonne fortress

Before going into the interior section we strolled around the outside between the outer wall and inner ramparts completing the circle before returning to the beginning.  The space between the double ring of walls was used for jousting, crossbow practice and timber storage as well as interception of attackers.   It’s possible to walk up on some of the walls and see the wider old lower town of Carcassonne below with its colourful, aged rooftops, church and jumble of buildings. 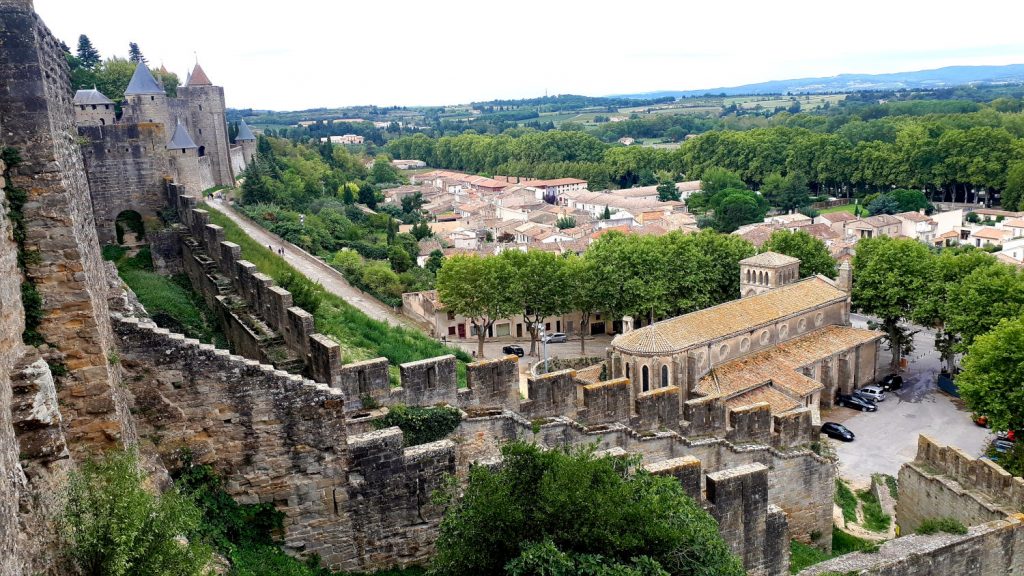 View over the walls to the town of Carcassonne below

This huge, imposing complex features a double walled fortification with a castle tucked away inside, surrounded by numerous watchtowers and an incredible 3km wall of defensive ramparts. This Unesco listed worldheritage sight is one of Europe’s most complete, surviving medieval walled cities.There is some controversy surrounding the style and extent of the restorations but we enjoyed the immensity of the place, the setting and the historic feel albeit not all completely authentic. 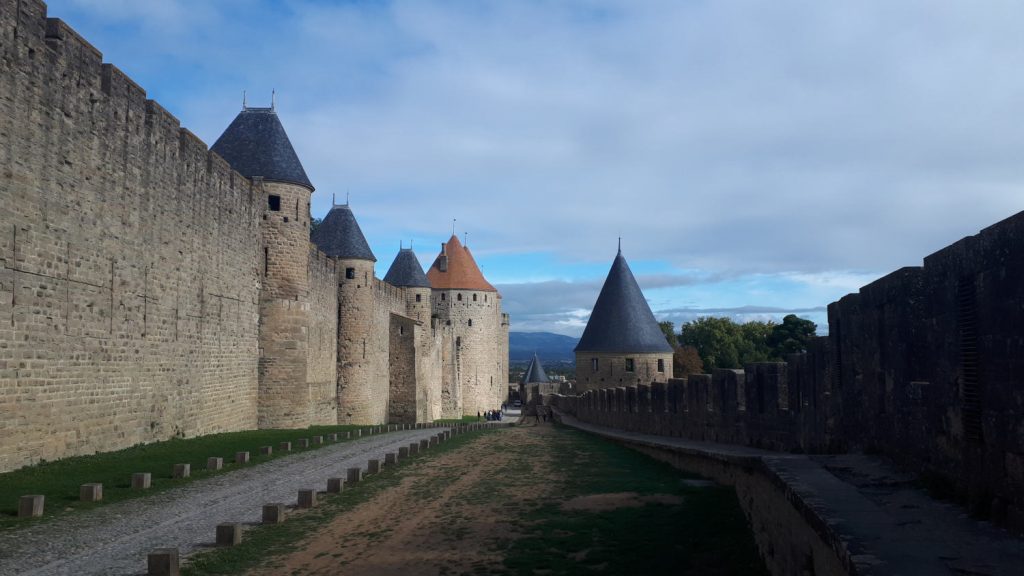 Inside the city walls is a completely restored medieval town and entering through the stone archway you feel like you’ve stepped back in time.  At least you would if you weren’t immediately bombarded by a touristic offering of over-priced gifts in the narrow little streets. It’s so full of character though that it’s still possible to imagine times gone by as you wander across the cobbles and follow the winding routes through the city.  At the back is Le Chateau, essentially a fortress inside the fortress with its own moat, five watchtowers and lookout galleries. There is a charge to enter this inner sanctum but everywhere else is free. 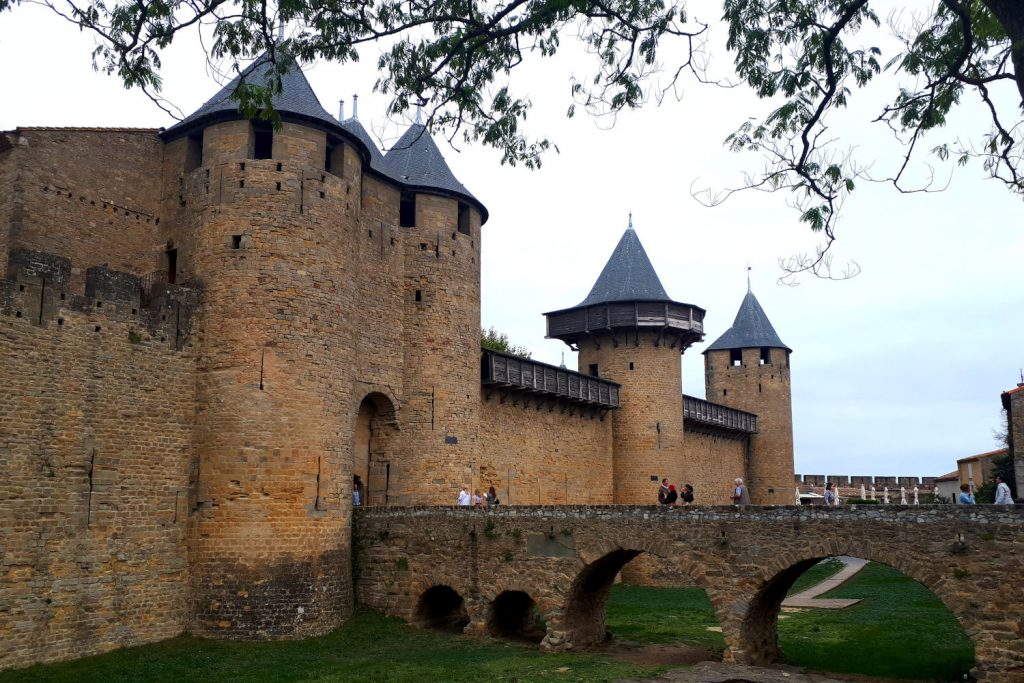 Carcassonne the moat and bridge to the inner fortress

A little way along is Porte d’Aude, another gateway, and this leads to the town and old bridge where you can walk to get a wider view of the Cite.  At this point the sky decided to turn grey but the colourful streets outside the medieval city walls made up for the lack of colour and brightened up our walk back to Buzz to continue our journey. 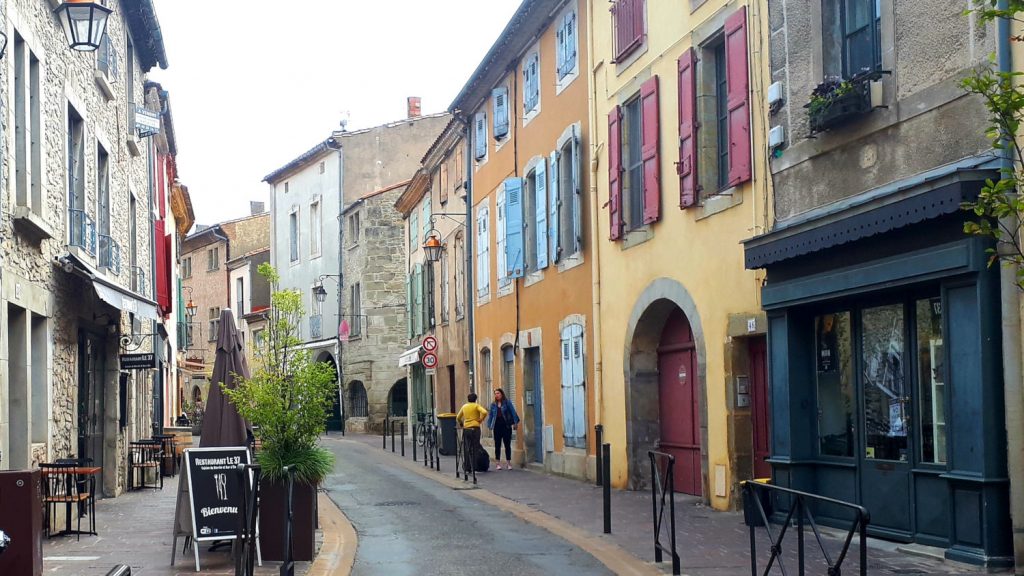 The colourful streets outside the walls of the Cite of Carcassonne