After our exploits and epic walk in the Parco di Portofino we decided a leisurely change of scene was in order and as it was also looking a bit windy and grey, made our way to the caves of Toirano about 3km inland from the Ligurian coast.     There are around 50 known natural caves in the area of the Varatella valley inside spurs of grey dolomite, separated by deep rocky gorges and we were headed to the Grotte di Toirano, positioned at 186 metres above sea level.  Knowing the weather wasn’t going to be the best a trip to the caves sounded like a fine idea and nothing too tiring as we had both woken up with backs like ironing boards!  We’ve visited many caves before and after a while they all blend into one in your mind, but they are always interesting and enjoyable to explore at the time and we were in the mood for something different. 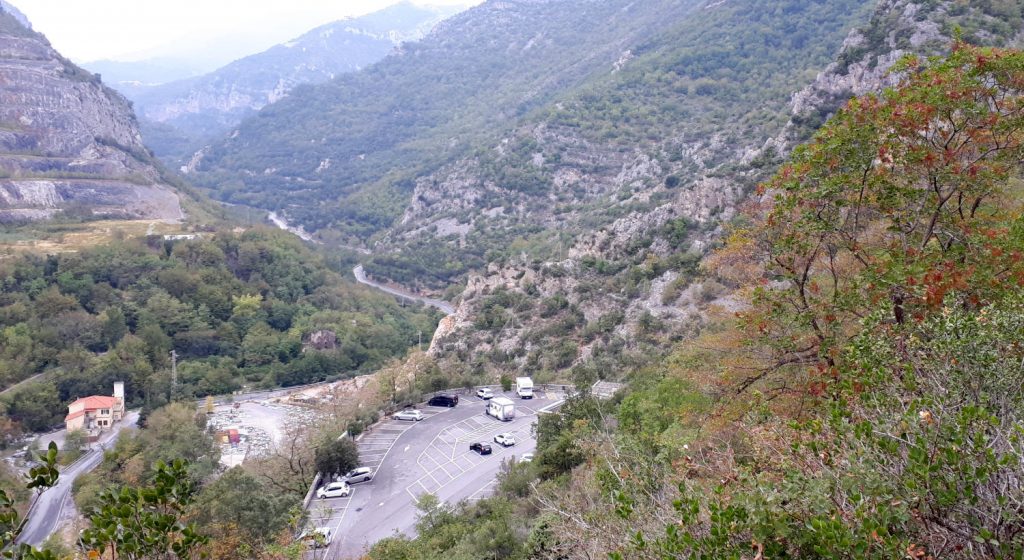 We’d been driving for quite a while, having left San Roco, and didn’t arrive until about 4 o’clock.  Not sure when they closed, we parked Buzz up in the large car park and hurried to the ticket office, to be told we were just in time and the last tour of the day was leaving in 5 minutes.  Perfect timing!  We were issued our tickets  for 12 euros each and then told we were to walk ‘just 300 metres’ up the steep slope on the side of the hill to get to the entrance where the guide would be waiting for our hour long guided tour through the caves.  300 metres is not far at all, but considering we were aching and our calf muscles still hadn’t forgiven us for our recent trek, scaling the hill as quick as we could left us hot and bothered even though by now it was cold and blowing a gale.   We still had time to spare though and we waited around for another 5 minutes listening to the voices all around us – some French, some German and possibly a couple of Dutch.  We were the only English.  These caves attract around 100,000 visitors a year and there was a group of about 20 of us. 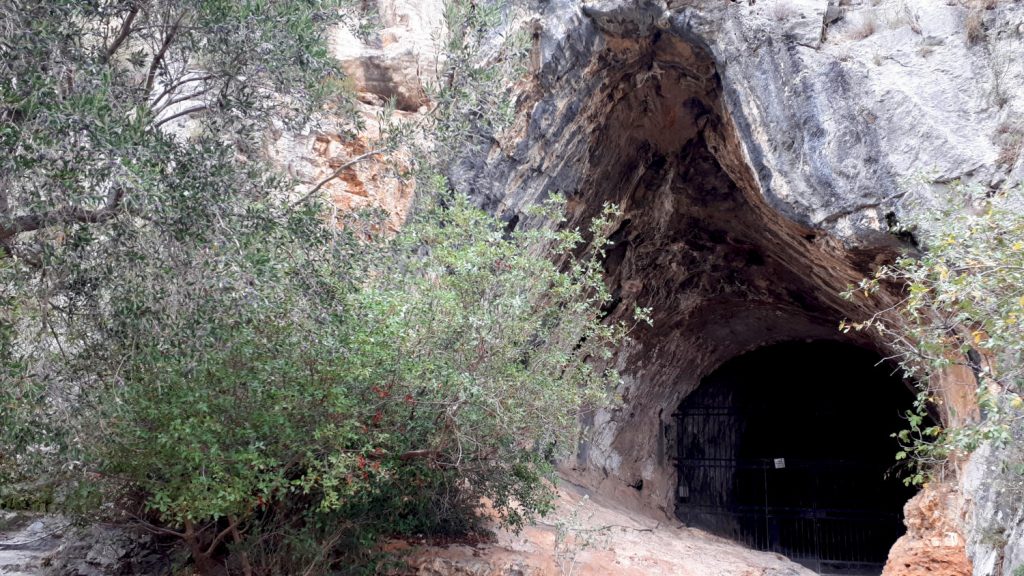 The metal gates to the entrance were opened and the guide ushered us in, suddenly talking away in Italian very brusquely while everyone looked at each other wondering whether anyone at all was understanding what she was saying. She then briefly addressed us in German to the relief of some and left the rest of us to get on with it, not noticing, or asking that some people had no clue what on earth she was talking about.   We didn’t dare ask as she was rather fierce and didn’t look like she wanted any fuss and anyway a cave is a cave and although its discovery and formation it interesting it’s all about the spectacle rather than the story and we were soon to find out that there was definitely a spectacle to be seen! 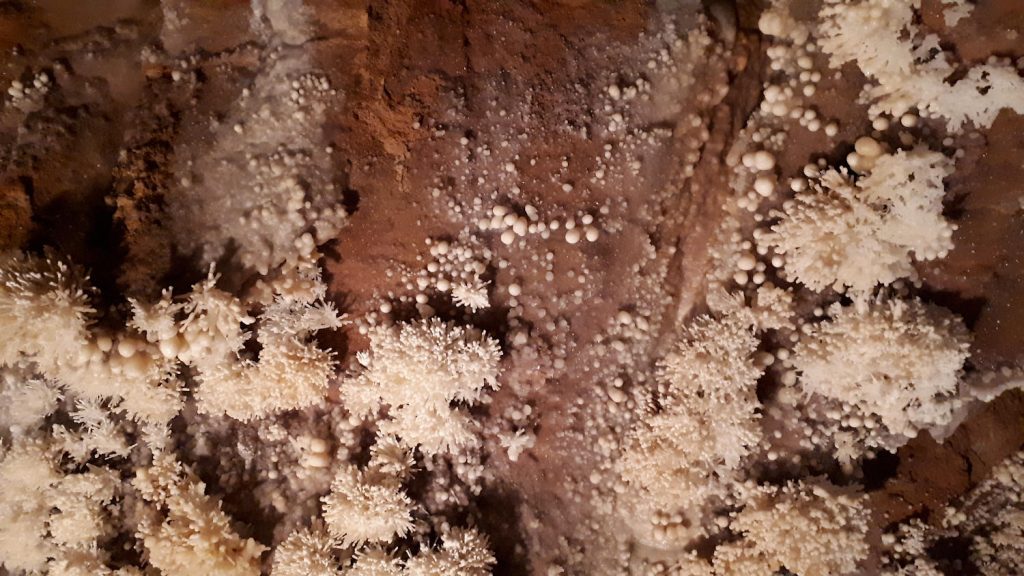 Unlike many caves which are grey inside, these caves were peachy and white with alabaster.   Entering through the Grotta Della Basura (the witch’s cave) we entered another world, unlike any cave we had visited before.  If a cave can be pretty, this was.  Our frighteningly efficient guide told us in no uncertain terms that flash photography was forbidden.  We hadn’t exactly understood this at first but it soon became clear when an unruly ‘senora’ was firmly berated more than once when her flash went off.  Unfortunately our photos are a little blurry as it was quite dark inside but hopefully they are good enough to give an idea of the many different structures, surfaces and weird shapes we encountered.  There were no huge cavernous rooms in this cave, it was more tunnel like, with lots of steps up and down, but no less impressive for it.  The first area we entered, full of oddly shaped calcite concretions was fascinating, with long stalagmites reaching upwards to join the stalactites reaching downwards creating unsual structures fused together. 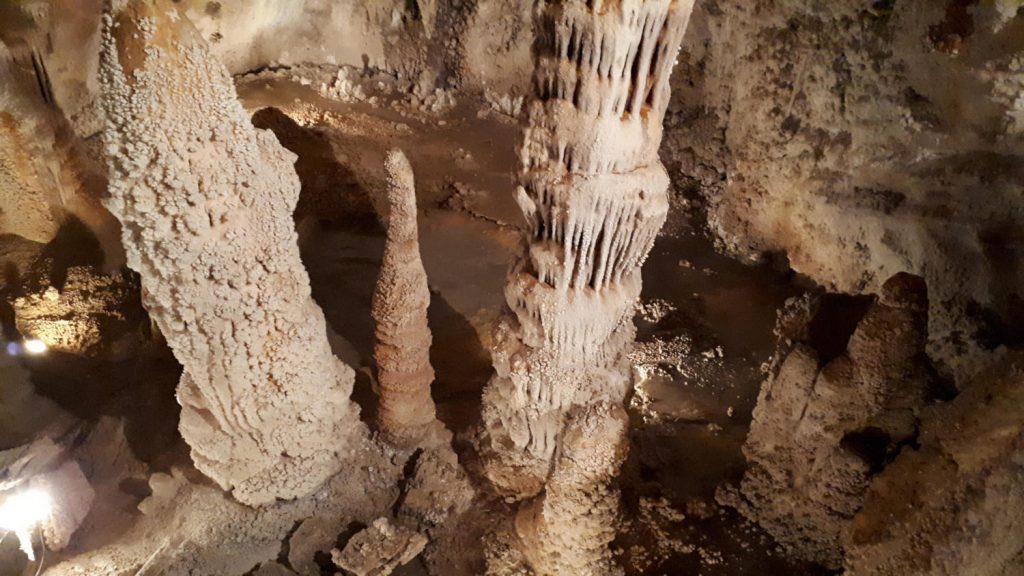 Moving on we passed through the area of the ‘Small Lake’  (Il Laghetto), a shallow pool of water occupied by non-pigmented and blind Nyphargus crustaceans.  Further along there is evidence that hibernating bears occupied these caves for thousands of years, testified by the discovery of many bones, paw prints and scratch marks on the ground and cave walls.  In fact it is the largest documented cave bear graveyard in Europe. There are also recorded footprints made by prehistoric Palaeolithic man, along with hand, knee and fingerprints and traces of torches, dating back to 12,430 years ago. 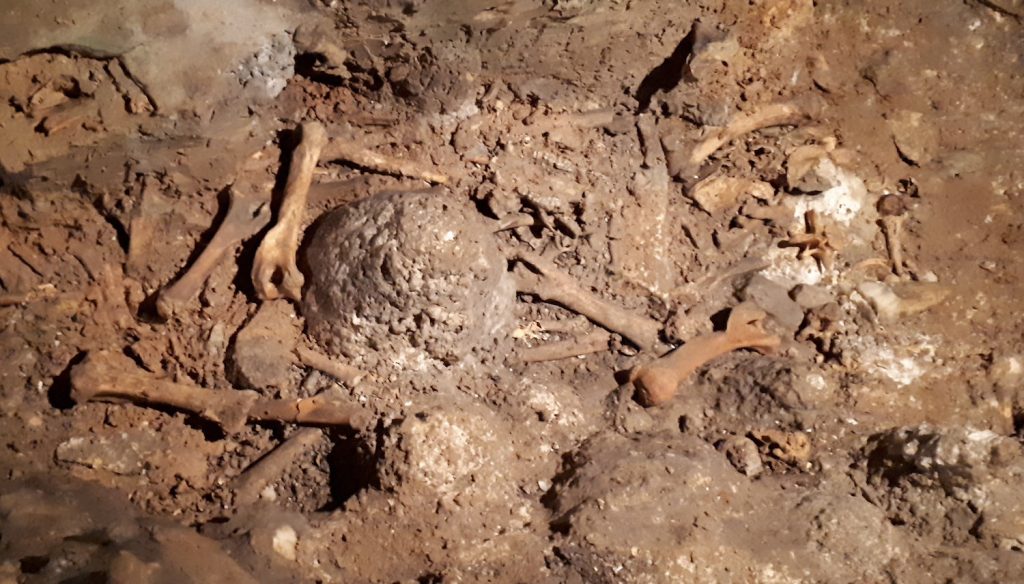 Moving along, a 120 metre tunnel connects to the next cavern, the Grotta di Santa Lucia, covered with fine aragonite crystal formations with strange star-shaped growths.  Giant stalactites reach down from the cave ceiling, some sharp and tooth like, some bulbous and rounded.   Stalagmites grow up out of the floor, some reaching high, pointing and twisting upwards like ornate lamp stands and others like short, smooth nobbles carefully positioned to trip you up!  Formed over hundreds of thousands of years these extraordinary and sometimes eerie growths were utterly fascinating. 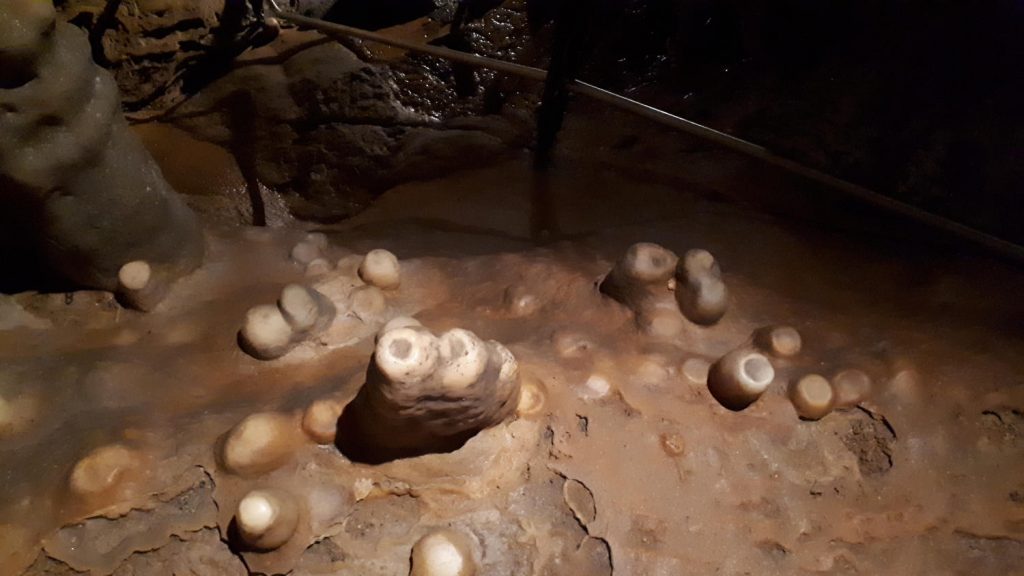 The final part of the tour took us through a widened tunnel, where we could see some of the 12,000 bottles of Durin spumante wine stored there for fermentation.  The caves act as the perfect natural cellar, giving a consistent temperature of 15 degrees, 90% humidity, darkness and silence for the majority of the time.  The bottles are left for 18 months, stacked in cages providing the ideal environment for producing an excellent wine.   Exiting the cave higher up on the South side we had a long walk back down the slope in the by now quite cold wind, spotting Buzz in the car park below.  Driving away from the caves we were left wondering – what other caves are hidden in these mysterious hills still undiscovered?  Possibly dozens more tunnels, caverns, pools and structures and even more remarkable sights than those we were lucky enough to see today.