After a couple of days on the coast we were ready to head inland again. We’d read about a suspended bridge walk in Monachil, not far away in the Sierra Nevada so took the opportunity to go while we were nearby. Set in the natural paradise of the Los Cahorros gorge it sounded like an interesting and different type of walk so we set off up the mountain to the small town of Monachil.  Somehow we completely missed our turning and ended up in a dead end with nowhere to go and had to perform a 10 point turn to the amusement of the ever present band of locals, sitting around waiting for something to happen!  Some time later ….. we  found our parking spot near the beginning of the walk which had been recommended to us by another motorhomer in a small parking area with lovely views across the hills.  It was too late to start the walk that afternoon so we went for a wander around the town hoping to get some maps from the Tourist Office, but it was closed – just for a change!  Instead we somehow found ourselves at a little brightly painted bar with a colourful terrace outside and troglodyte cave rooms inside, set into the rockface. 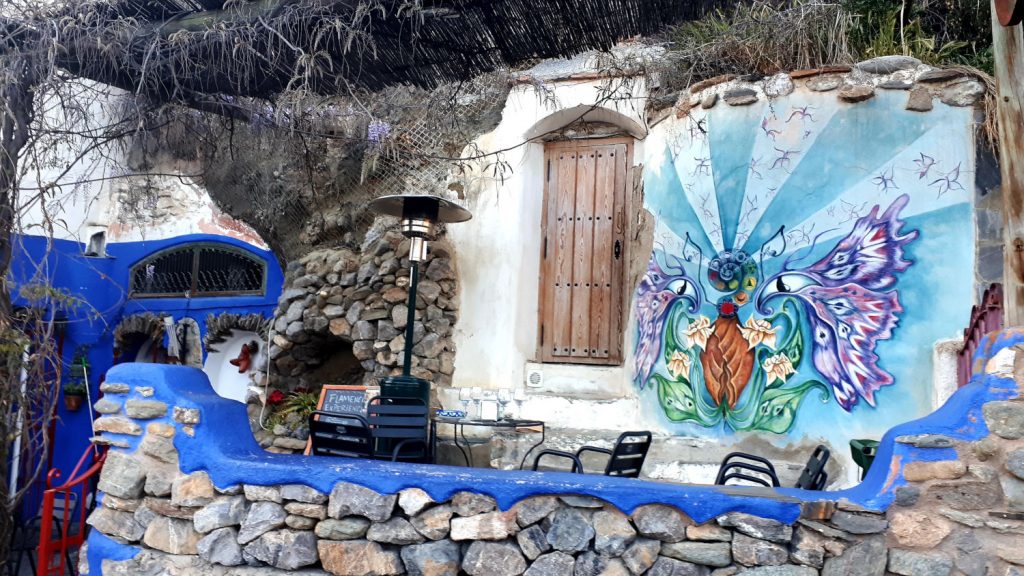 We’d only intended to stay for one, but one drink led to three, as we were tempted in by the unexpected free tapas that came with each drink.  The first to arrive was a plate with two huge balls of pate, followed by little bowls of nachos with melted cheese and tomato salsa, finished off with a plate of mixed potato and sweet potato.  It was really relaxing sitting there with a lovely view, the warm afternoon sun and a laid back, social atmosphere.  We didn’t have far to walk back and could have easily stayed there for another couple but we eventually tore ourselves away after the sun went down and it suddenly got cool. 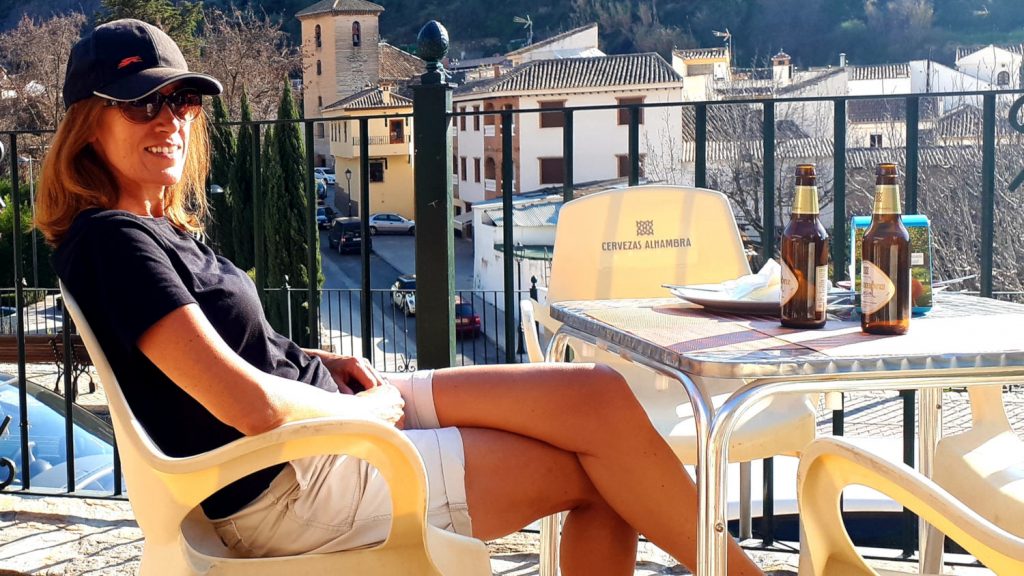 One drink and tapas leads to another …

The next morning we got ourselves ready, packing a good picnic with plenty of snacks and followed a little track down through the village houses to get to the beginning of the walk. It’s an 8km circular walk with various options to turn back, turn off or join up with other walks as you go.  Just after setting off, we stopped to admire the view and got chatting to a lone German who said he had got completely lost the day before and ended up following the water pipe to the top of the mountain to look down and get his bearings.  About now we were starting think we should have gone back to the Tourist Office to try to get the maps and later on we found out for ourselves just how easy it is to wander away from the route. 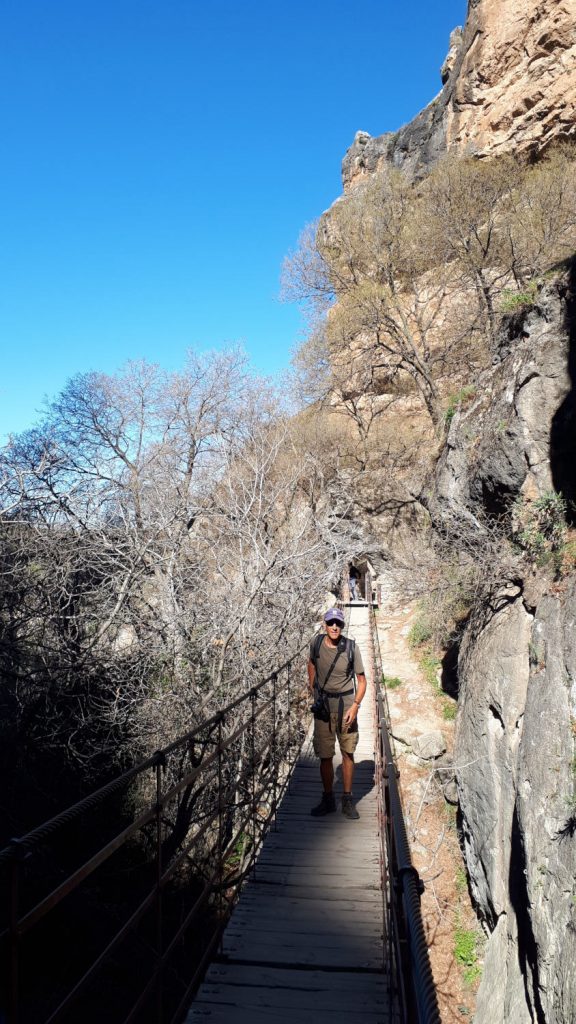 Suspended, wobbling bridge over the river

We headed off anyway and soon came the the first of several hanging, wobbling bridges which are quite fun to cross and although they look a bit rickety, are apparently all perfectly safe.  Within the gorge there are some narrow pathways above a small river where you have to crawl under the rocks or negotiate on foot, clinging on to the sides with your fingertips! 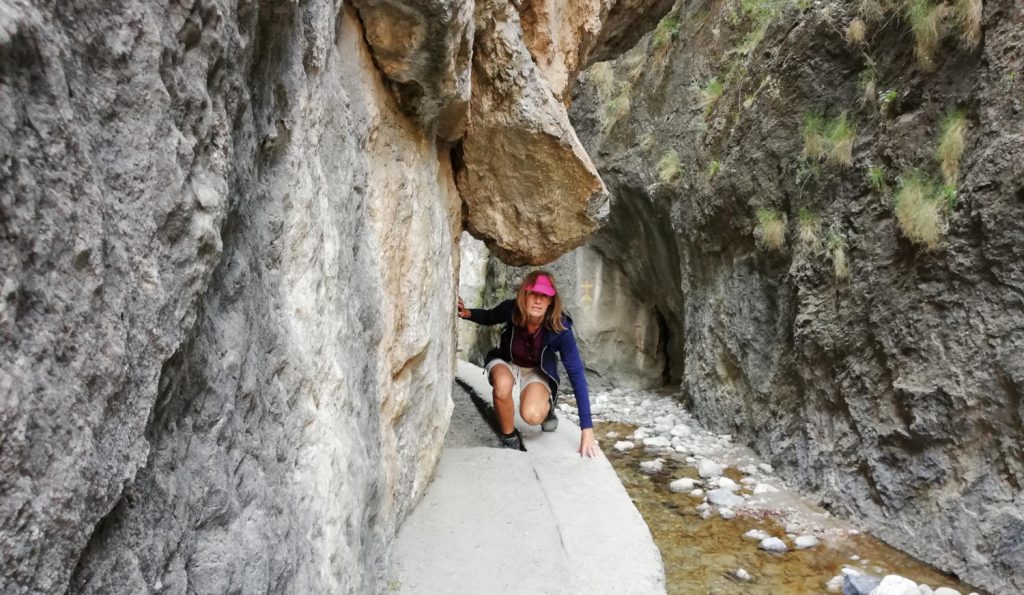 We intended to do the 8km circular but inadvertently went astray as the signposting was very sketchy and vague and after a couple of hours we seemed to be on a completely different path.  After scrambling up what felt like an almost vertical, crumbling track with loose rubble, slipping and sliding as we went,  we realised it couldn’t possibly be the right way and turned around, taking a much friendlier path we’d seen some other people take.  We saw signs for other routes, but not ours so in the end we just made it up as we went along and created our own walk, looping round over the other side of the gorge which meant we missed out on a couple of the bridges.  It didn’t matter though because it was all great scenery and we enjoyed the climbs, changing landscapes and views. 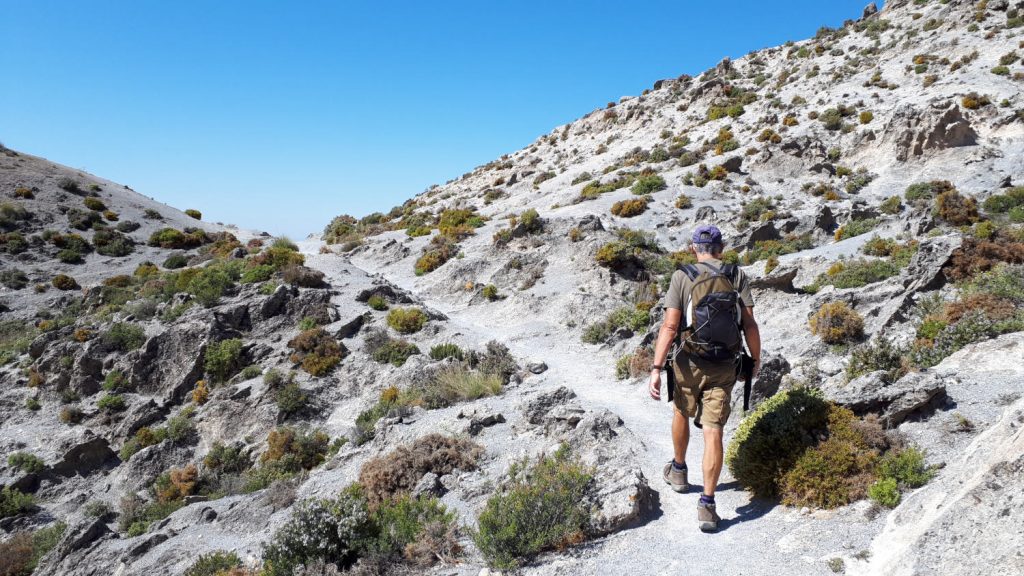 Changing landscapes throughout the walk

We love sitting with a picnic in the hills or mountains. Somehow it just seems to enhance the whole experience. Taking time to stop and sit for a while, taking in the surroundings, listening to the sounds all around and breathing in the fresh mountain air.  Add to that a tasty lunch, a few snacks and a flask of coffee and we’re happy.  The seating isn’t always that comfortable though! 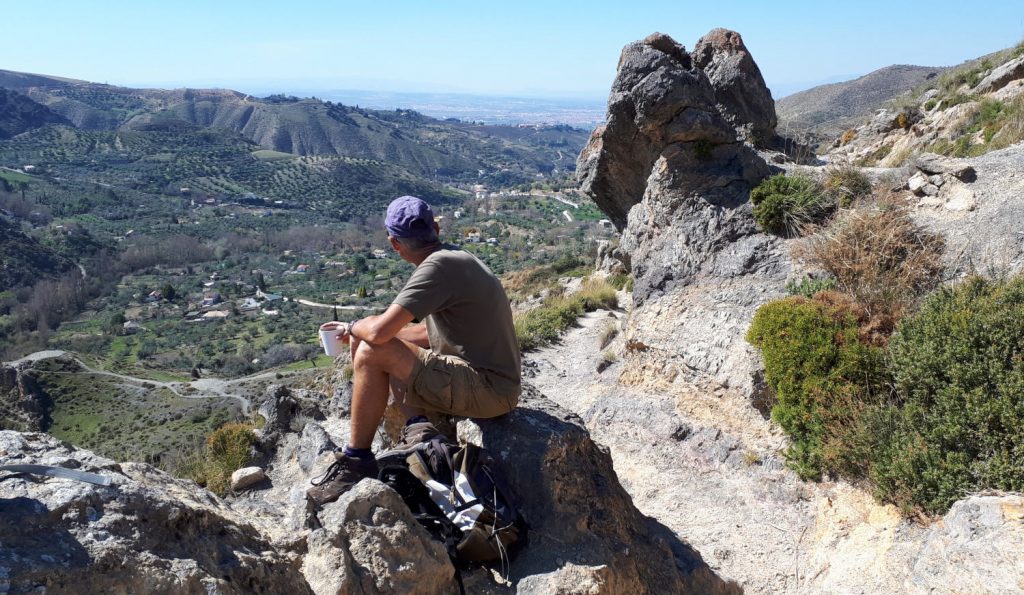 Finishing our drinks, looking over to where Buzz was parked

There was a sad moment later in the day when we came across a Spanish couple, very distressed, who had lost their ‘perro blanco pequeno’ (little white dog). They were desperately calling for him over and over again for at least a couple of hours.  It’s such a vast expanse with tall, steep slopes, crumbling hillsides and gulleys. We couldn’t bear to think they might not find him.  We kept our eyes peeled and listened out for him but didn’t see or hear anything.  When we left they were still there looking for him. 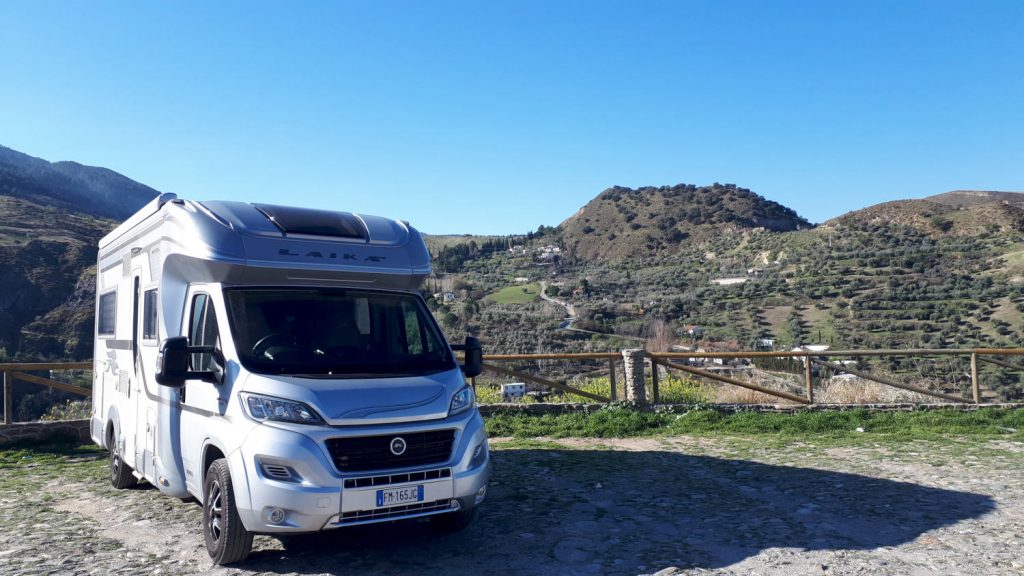 When we eventually got back to the motorhome we felt quite invigorated, although tired and it was nice to get in and put our feet up for a while before thinking about what to do next.  Decision made, we pulled out, stopping just in time as a bumping, clattering old truck careered past us up the hill with a single goat in the back, a huge clump of hay in its mouth, standing up (just) in the back, determined to eat his feed!

We’ve been up and down the country, from the coast to the mountains, from big towns to small villages and that’s what keeps it interesting.  The freedom to move, the variety of places to go, the never ending choices you can make – that’s the real beauty of motorhoming.  So, where to go next? …….