Hello Germany! Motorhoming along the Mosel.

Hello Germany! Motorhoming along the Mosel.

After several short UK trips we were feeling stupidly excited about continuing our motorhome travels in Europe. This time kicking it off with a trip to Southern Germany.   It was quite an early start for us in the morning, leaving home in the drizzle at 6.15am for an 8.25am ferry from Dover to Calais. Luckily we had a good journey which can’t be said for a forlorn crowd of people cowering and sodden at the side of the road next to their broken down bus.  287 miles and 9.5 hours later we arrived in the small town of Roetgen in the North Rhine-Westphalia region of Germany. We were only just inside the border beyond Belgium but we were in Germany, we’d got a good few miles under our wheels and were ready to stop and relax for the rest of the day. 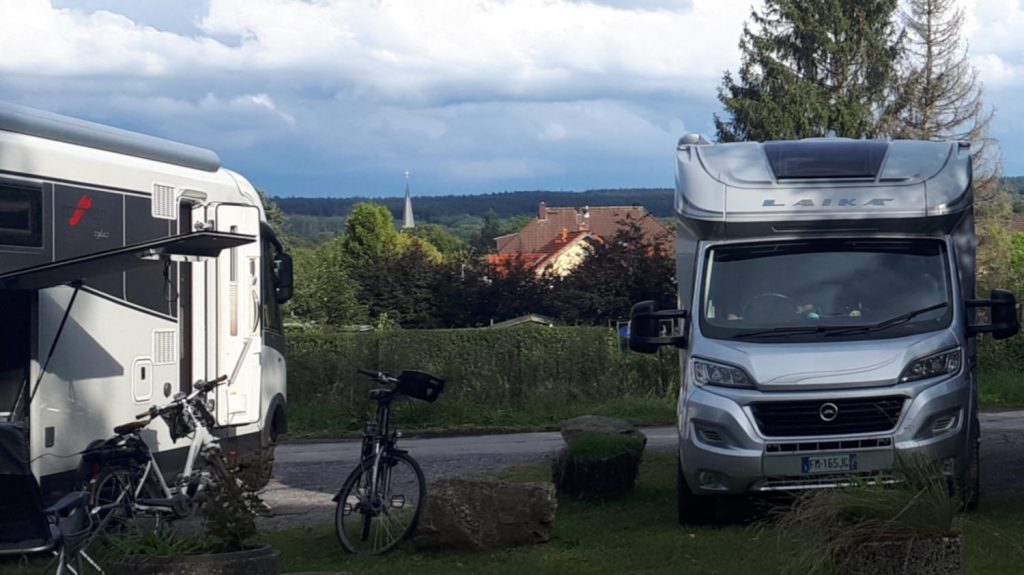 Our first night in Germany, 9.5 hours after leaving home

After parking up in the free motorhome parking area we got out to stretch our legs, walking along a small part of the 125km Vennbahn, one of Europe’s longest former railway and now cycle track, coming across a milk and cheese vending machine, the tourist office which was closed and then heading straight for the nearest coffee shop.  As it was Monday we thought we may as well waste no time in embracing the German afternoon custom of ‘kaffee und kuchen’ (coffee and cake) and go straight in for a #MondayBunday treat. We couldn’t quite believe the size of the slices of apple crumble cake and black cherry cheesecake and it was as much as we could manage to waddle back to Buzz afterwards, drastically revising our previous plans for dinner! 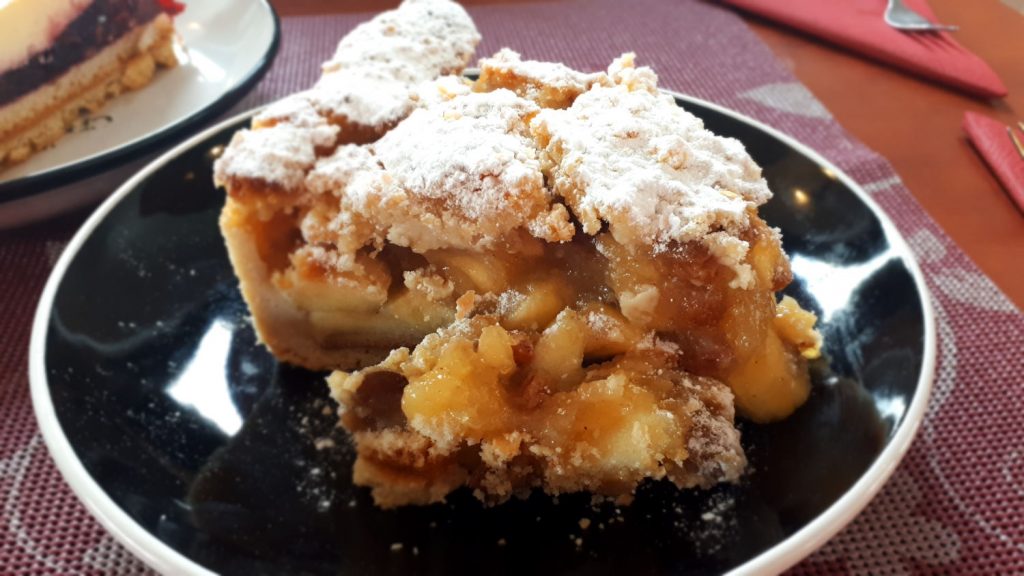 The next morning we drove 20km to the stunning little town of Monshau which straddles the Rur River, it’s old timbered buildings haphazardly lined up along its scenic banks. Talk about postcard pretty, it was just gorgeous. It smelt pretty good too with an amazing aroma of freshly baked pastries wafting in the air. After yesterday’s indulgence we were highly tempted but just about managed to resist. What a wonderful little place to start getting to know Germany. Full of character and history with a bright sunny day to show it at its best. We couldn’t have asked for more.  We always feel so lucky when we visit a place like this as its not a major destination and so easy to miss. A real little German gem. 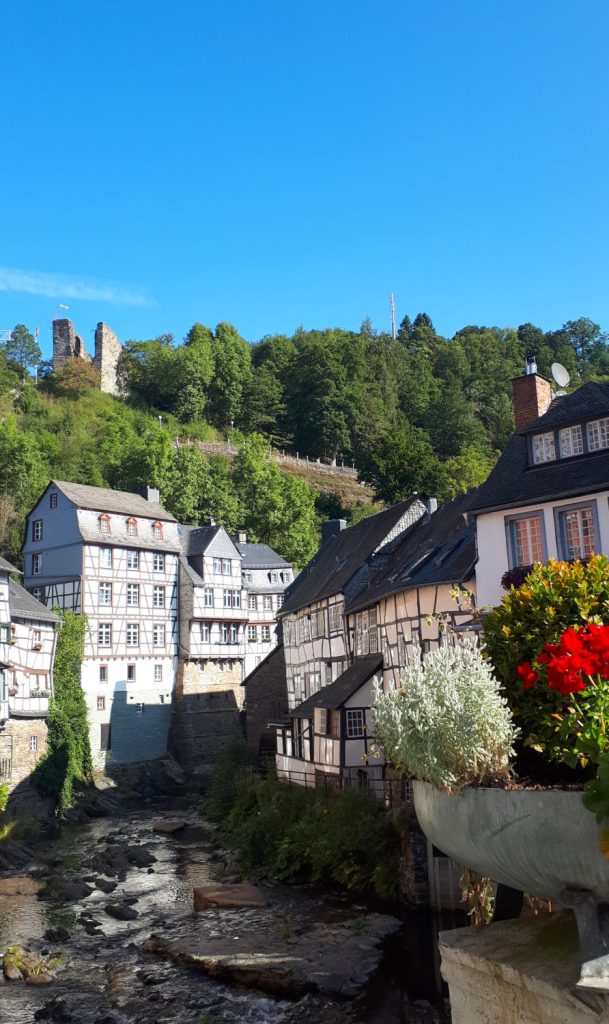 Beautiful Monschau with half timbered buildings lining the river

After lunch back in Buzz it was time to move on to the historic city of Koblenz sitting on the confluence of the Mosel and Rhine rivers. It was about a 2 hour scenic drive to get there so although quite far, the scenery made it all part of the enjoyment. So far the German roads have been good, well made, wide enough and fairly quiet. Let’s hope that continues.

It was a hot and sunny afternoon when we arrived in Koblenz. We parked alongside the river where overnight stopping is allowed and took a pleasant half hour walk along the river passing the impressive Electoral Palace and Schloss (castle). The Koblenz cable car crosses the river, rising up to the imposing ancient Ehrenbreitstein Fortress, built in 1817,  at the confluence with The Mosel river, the Rhine’s ‘little sister’.  The German’s have a name for this point, Deutsches Eck, ‘where Father Rhine meets Mother Mosel’. There are a lot of boat trips leaving and arriving on this part of the river so it was quite busy with day trippers. We walked back through the ‘romantic old town’ stopping for our first German ‘bier’ and practising our limited German language skills in the process, even getting the word for ‘the bill’ wrong!  We tried our pitiful best but just got a blank, confused look in return so had to resort to ‘cheque bitte’ which worked much better. 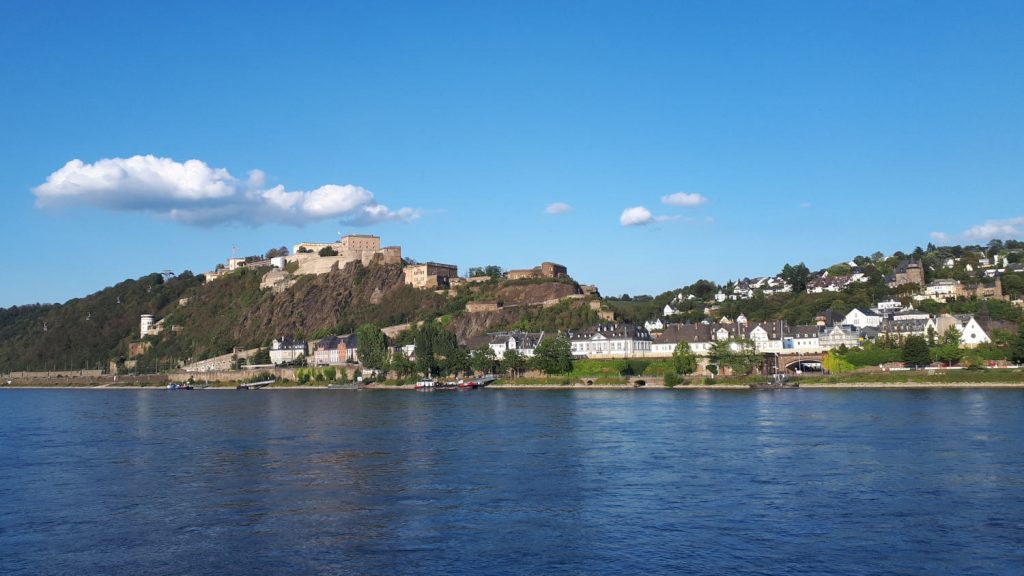 Koblenz and the imposing fortress on the hill above the Rhine

The next morning we took our morning coffee down to the river bank and enjoyed the warm sun watching the cruise boats gliding by, having a lazy half hour before cycling the 3.5km along the riverside path to Stolzenfels Castle.  It was once a mighty medieval fortress considered to be the epitome of Rhine Romanticism and is now a picturesque palace, loftily perched up on a high bank overlooking the Rhine in a hilly garden setting. 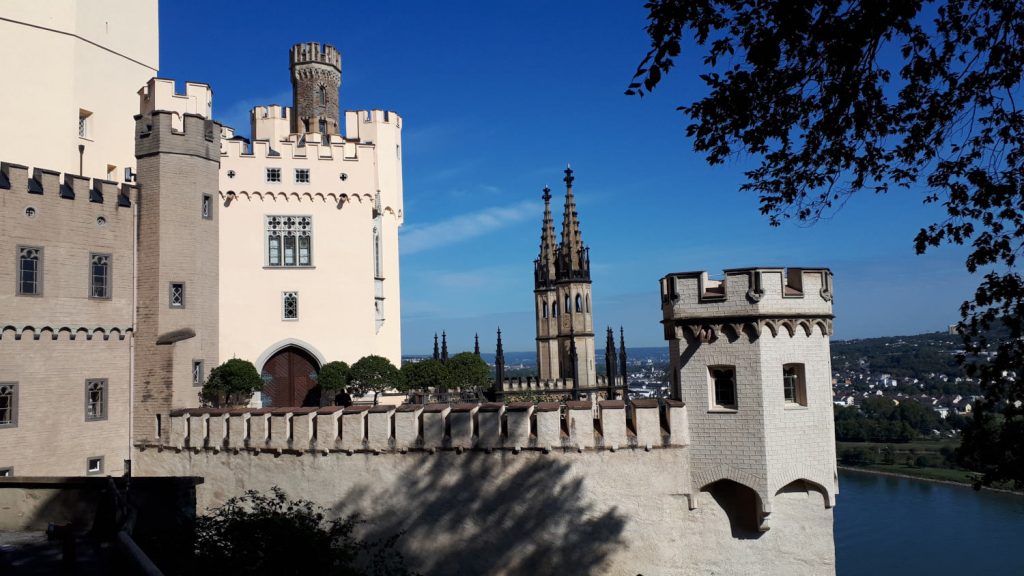 Stolzenfels Castle on a hillside above the Rhine river

The onward plan was to mosey on down the Mosel, following the meandering river and wine route down to Trier stopping at little towns, castles and maybe the odd wine tasting or two along the way. We were about 10 minutes down the motorway, obediently following Google sat nav when we suddenly realised we were meant to be on the scenic route which is the whole point of this part of the trip! A quick ‘recalculate’ and we were back on track following the picturesque road along the river passing vertiginous vineyards and small towns along the way.

We pulled in at Cochem, with its imperial castle first built in 1130 and atmospheric old town, enjoying a wander through the streets admiring the atmosphere and architecture, browsing in the wine shops and drooling over menus of sizzling schnitzels, juicy bratwurst and freshly baked flammkuchen. 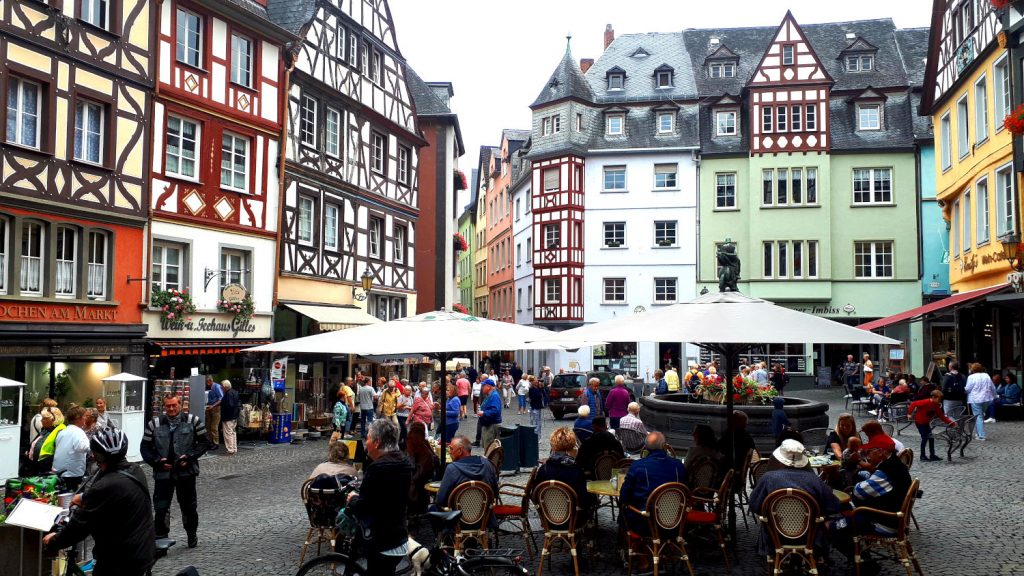 Cochem town square – a riot of colour and throngs of people

The weather had turned a bit grey but the brightly coloured buildings, boats and flowers made up for it. Across the bridge we had a gorgeous view across the river as we sat with another German beer before walking back to Buzz in the motorhome parking place just a few minutes up the river. Another great day in Germany. 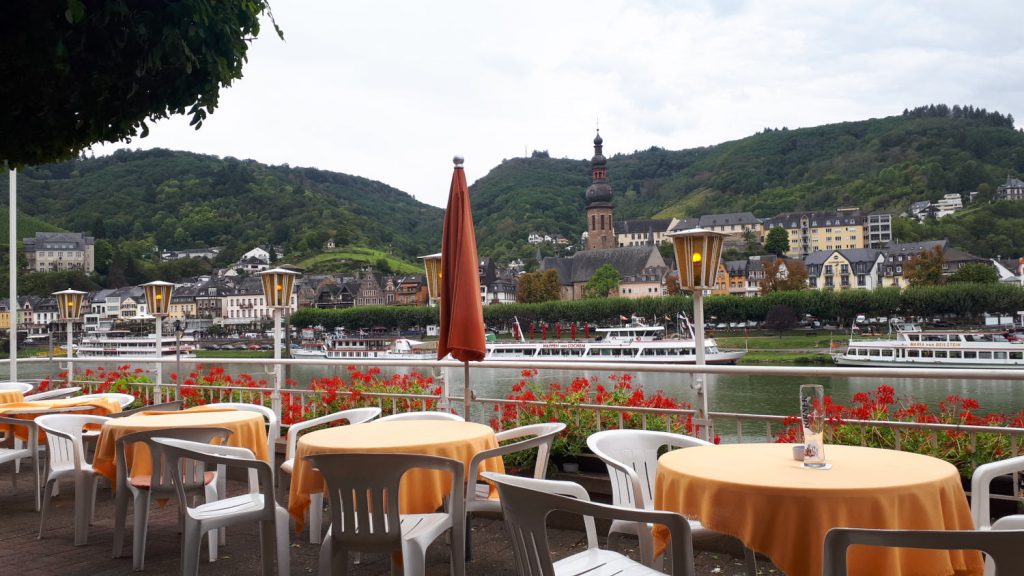 A short detour inland from the Mosel is the Geierlay suspension bridge, the 2nd longest in Germany at 360m and 100m high. When you first get on it seems quite stable but a few metres in and the wobbles start but it’s totally safe and nothing to worry about! The nearest car park (and last loo!) is almost 2km away and then its a walk across fields before you come acros it spanning a lush green forested valley. Definitely worth the detour. We’d taken a flask and snack so settled down on a tree trunk in the forest to take a break with a fine view of the bridge and the fresh, fragrant aroma of the forest trees. 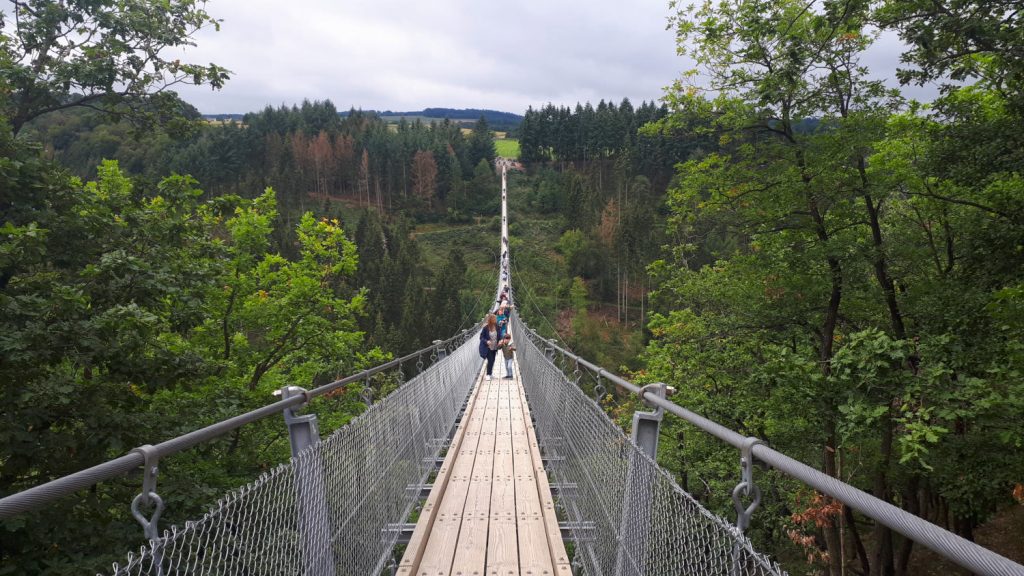 The wobbly walkway that is the Geierlay Suspension Bridge

The Mosel valley, its sleepy little towns and scenic sights are just lovely. It’s so relaxing just making our way from one place to the other either walking, cycling or driving and it all seems so relaxed and easy. Motorhome parking is a doddle and there are options everywhere, from free Stellplatz to fully serviced campsites.  There’s also a flat, easy to follow cycle path along the whole river and its all so pretty! 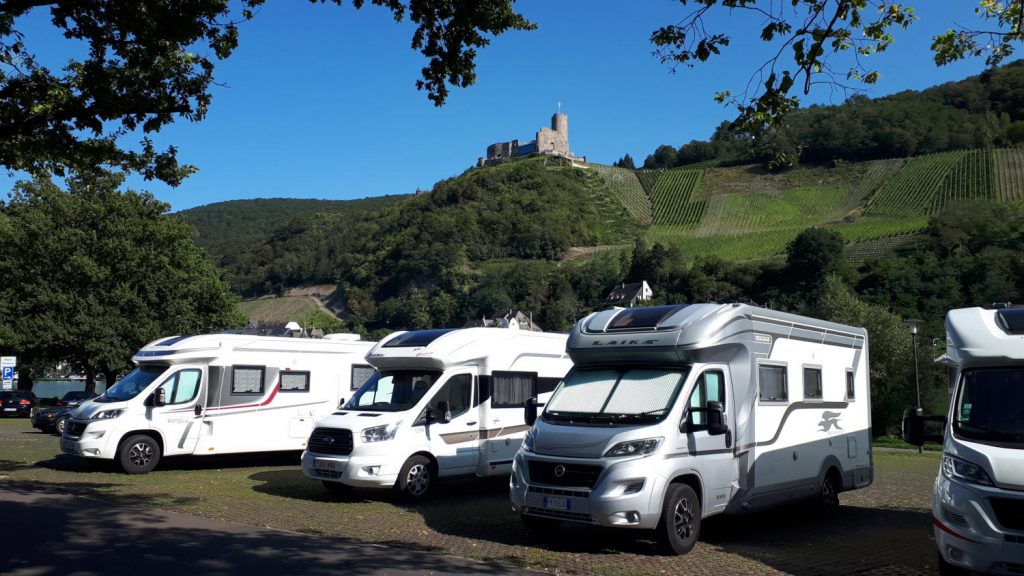 Next up was beautiful little Beilstein where there is parking up by the ruins of the castle, Burg Metternich which dates from 1268.  The town is really cute, quaint and maze like and is known as the Sleeping Beauty of the Mosel due to its historic inaccessibility being only reached by boat until 1900.   The charming streets are full of 17th-19th century half timbered buildings filled with all sorts of temptations in the form of cakes, pastries, local wines, coffee and sizzling sausages! 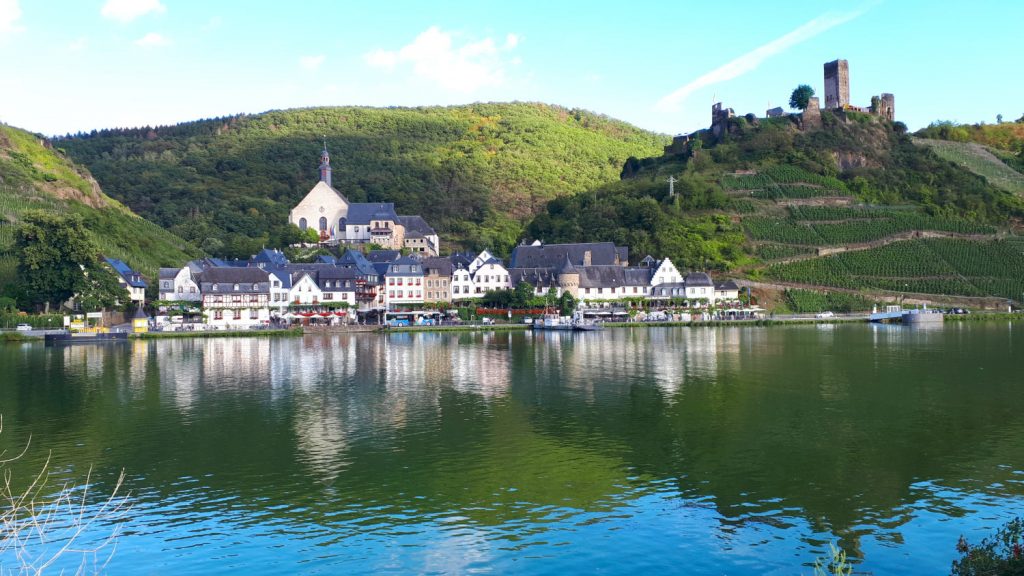 In the afternoon we drove along to Eller where we sat in the late afternoon sun on the grass in front of the Stellplatz and had a peaceful night right by the river once again. Bliss! 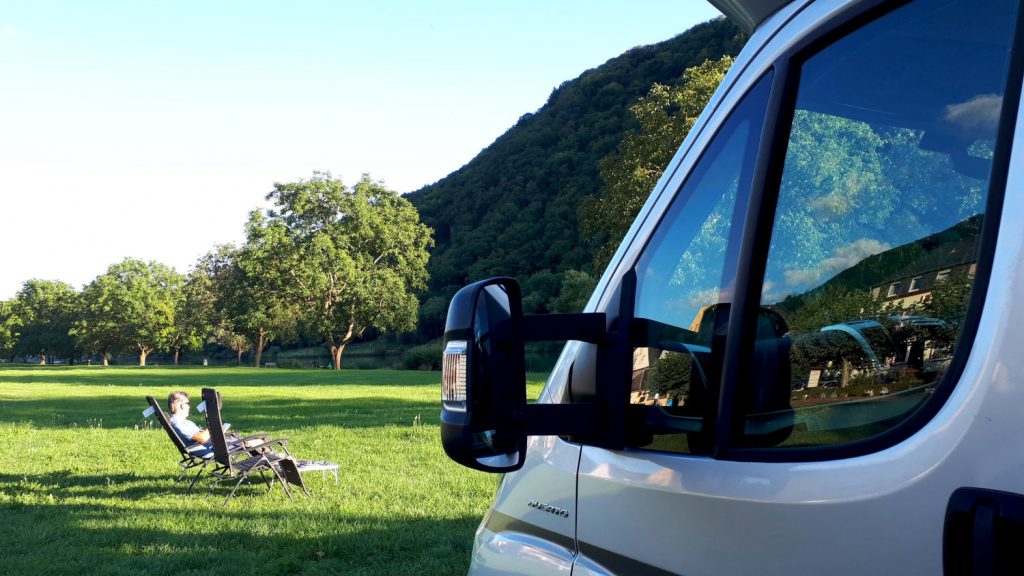 The peaceful Stellplatz parking place in Eller, with room to relax in front of the river

After a bit of research into the immediate area we realised we were near the steepest vineyards in Europe and right next to a hiking track up the slopes.  That was all the invitation we needed and the next morning the walking boots were on and off we went.  The Calmont climbing trail takes you on a ‘difficult’ walk for ‘experienced hikers’ through the vertiginous vines, climbing up 10ft ladders, clambering up shale steps and clinging on to metal ropes as you traverse and climb along.  Sounded like fun!  We set off from Eller following the Calmont Klettersteig path about 3km to Bremm. The views over the river below were idyllic and the walk really interesting and enjoyable.  Our reward apart from the fantastic views was a descent into Bremm and a lovely lunch of freshly cooked Flammkuchen and a generous helping of appelstrudel washed down with a cold beer. 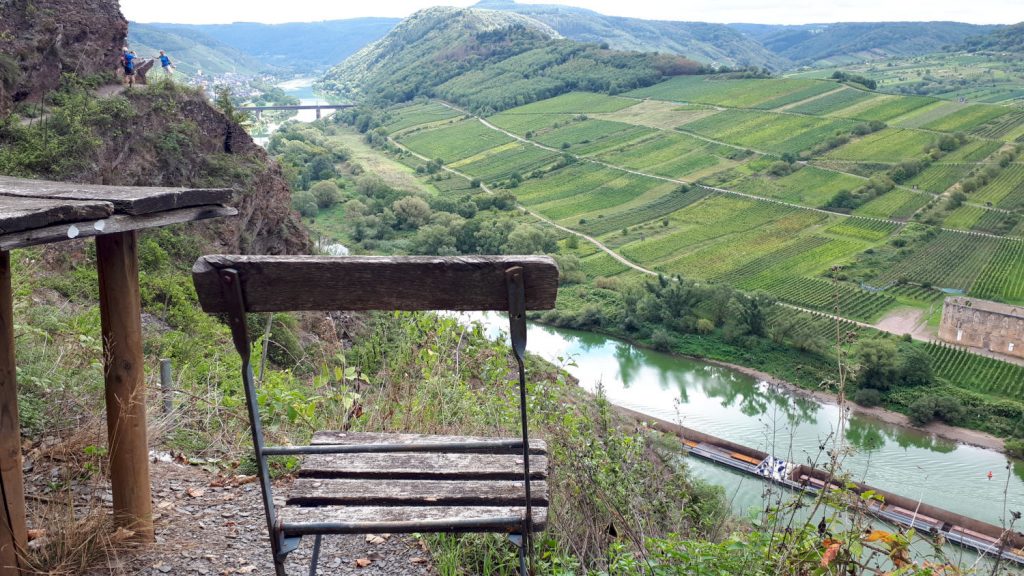 We weren’t finished though and chose to climb back up to the summit on the Rundwanderweg path to the ‘Four lake viewpoint’ (not sure why it’s called that, there aren’t any lakes!) and cafe where we indulged in a cold glass of Riesling before walking back along the ridgeline and down a very sleep slope back into Eller. 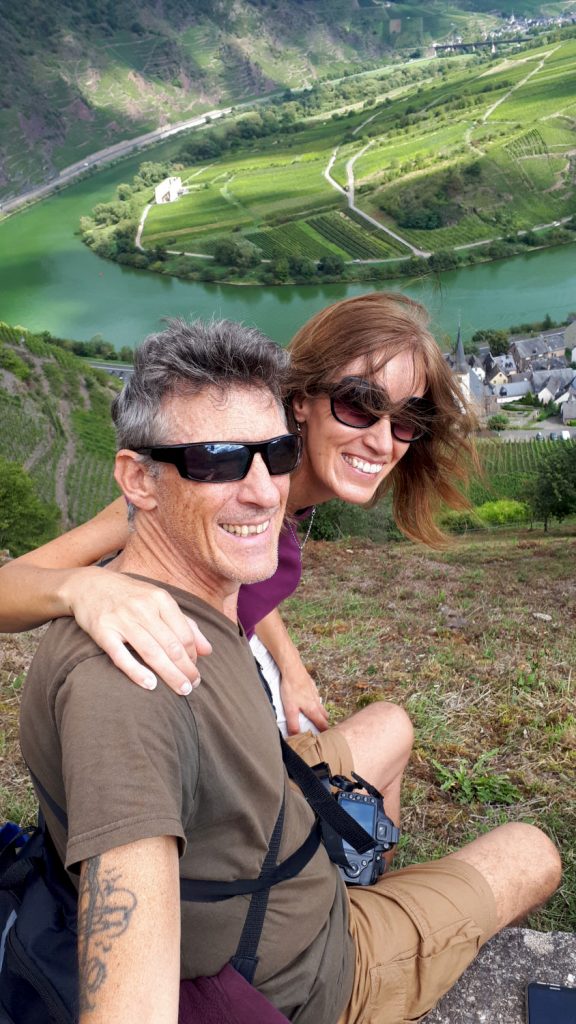 We made it to the top!

We arrived back at Buzz 5 and a half hours after we’d left, feeling weary but elated. It was exhausting at times and our hearts and calf muscles definitely got a good workout but so worthwhile and so satisfying.  Our 5 euro Stellplatz ticket for the previous night was just about to run out and as we arrived back we saw the ticket man outside Buzz tapping his watch and shaking his head. We pointed to our boots, rucksacks and the hills behind us and when he took in our bedraggled and tired looks he let us off and said we could go.

The next day our calves were feeling surprisingly fine but we decided to take it easy nonetheless.  We drove and parked up in Traben-Trarbach a little further along the river where Buzz had a visit from a fellow Laika. Its German driver came to say hello and admire our cycle rack, measuring it up and taking photos. He said ‘sprecken zie Deutsch’? and when we said ‘no’ started chatting away in German anyway. In the end it came down to pointing, smiling and gesticulating. Seems to work well in any language!  We explored the old town, the best part being the impressive gateway on the bridge and then moved on. 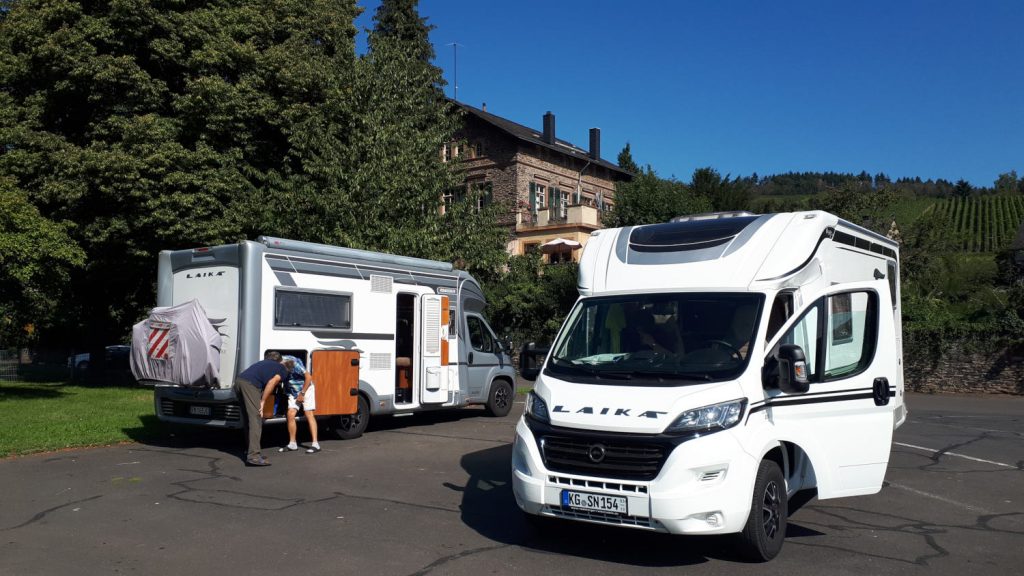 Buzz and the German Laika motorhome

Next morning we woke to find our Belgian van neighbour with a flat battery. It was Buzz to the rescue for a quick jump start to help them on their way. We unexpectedly received a ready chilled bottle of bubbles in thanks. How nice! 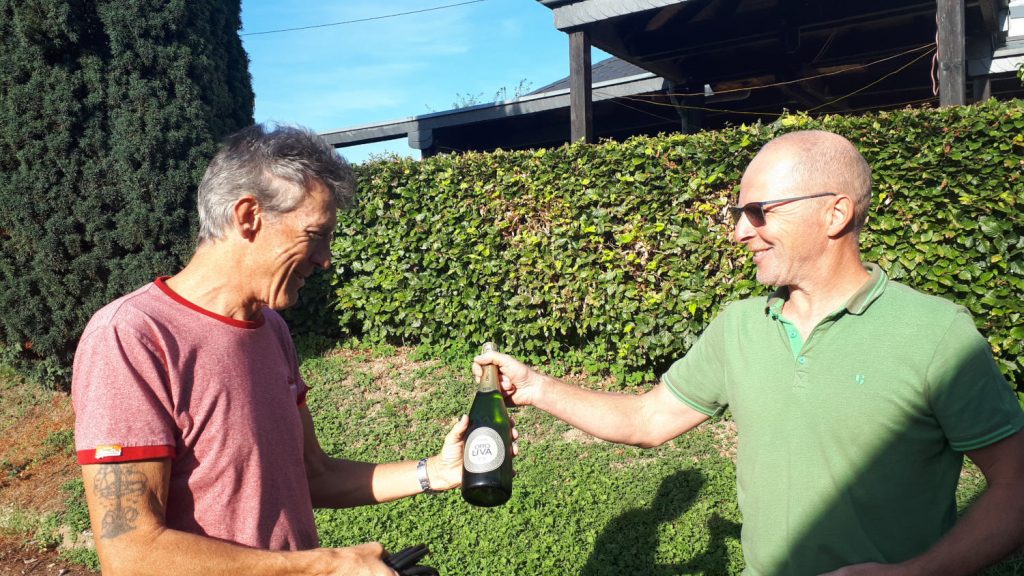 An unexpected reward for a good deed

We visited 2 more towns, beautiful Bernkastel-Kues in the heart of the Middle Mosel and Trier, one of Germany’s oldest towns and home to an incredible 8 UNESCO World Heritage sites.Our favourite was BK with its characterful old higgledy piggledy buildings in the old centre and which according to our guide book makes its own local cheese. But despite searching high and low with our cheese radars on high alert we didn’t see a single slice! 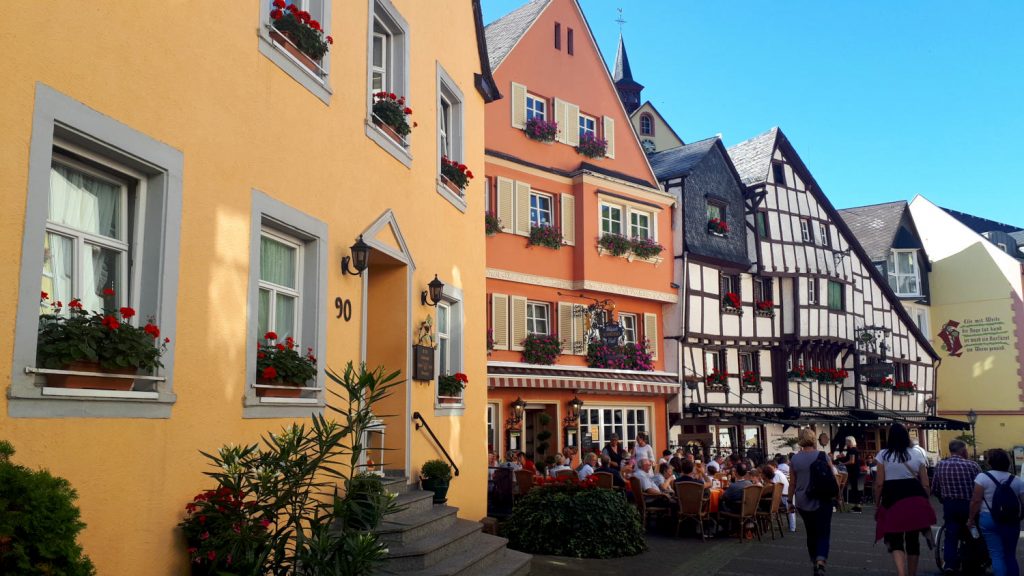 Lots of colour in the streets of Bernkastel-Kues

Trier although old in origin didn’t have quite the same feel as a lot of it was rebuilt after the war. It does have its Roman ruins though, and has a more spacious feel to it with wide open town squares and some appealing architecture here and there. 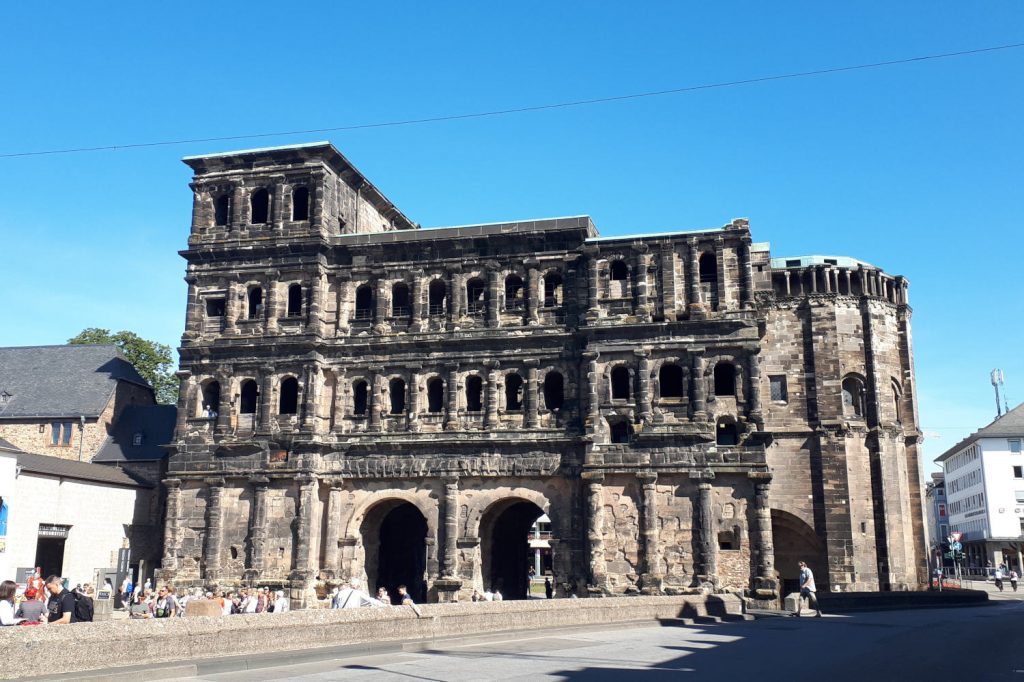 Afterwards we said goodbye to the Mosel vallley and drove 2 miles East to Bad Durkheim to catch the last day of the biggest wine festival in Germany and a complete change of scene.