Posing in Pisa in the Field of Miracles

Posing in Pisa in the Field of Miracles

Our first encounter with Pisa was 10 long years ago when we had a brief visit on a stopover as part of a Mediteranean cruise. That was in August and it was scorchingly hot, so busy you could barely see in front of your face and also very short. This time we were at leisure and under our own steam (or Buzz’s steam) and glad to be visiting later in the year when we presumed it would not be so busy. We were really lucky to find a perfect motorhome sized parking spot on the main road leading towards the main attractions in Pisa and having got Buzz settled in, walked just 15 minutes in a straight line and we were there. 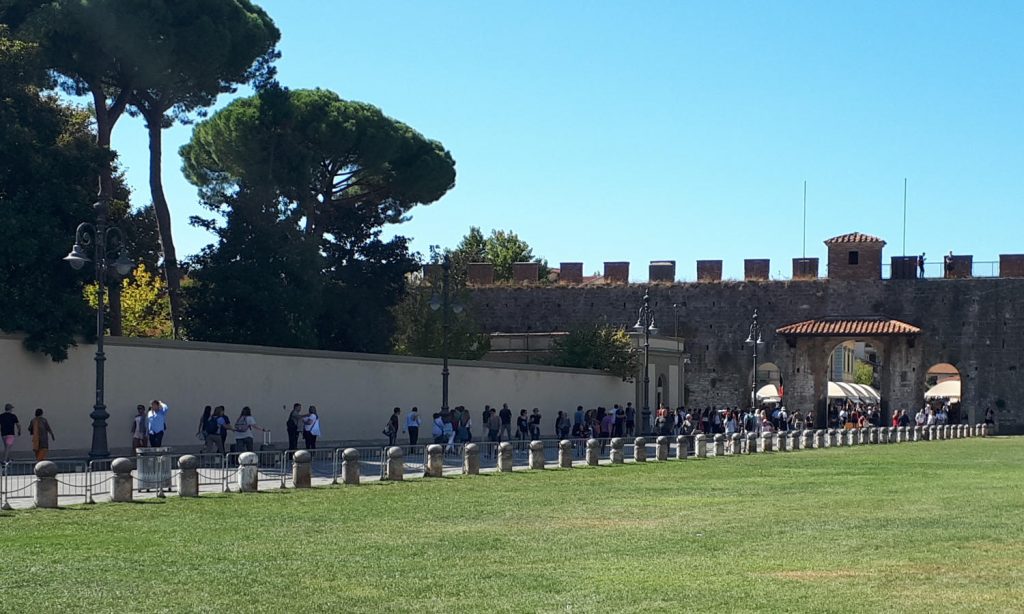 Unsurprisingly for a major tourist site, the first thing that greeted us (although not as many as last time) were dozens of fold out pyramid shaped market stands selling Pisa T-shirts, plastic leaning towers, bags, mugs, key-rings and everything else plastered with a leaning tower you can possibly think of! Moving swiftly on we entered through the Porta Santa Maria, opening out onto the Field of Miracles (The Piazza Dei Miracoli), a large green lawned square, home to the captivating sight of the Camposanto (cemetery), the Romanesque styled Baptistery (the largest in Italy) with its stand out red tiled dome and of course the magnificent medieval Duomo (cathedral) and its famous leaning tower, all dazzling brightly in perfectly polished white and grey marble. Although noticably quieter than our last visit, there were still a large number of visitors jostling for position, trying to get that must have shot of supporting the tower – some with a hand, some with a foot and one elderly lady we saw posing to prop it up with her walking stick! We were quite amazed by one woman who posed for a good 10 minutes in the same exaggerated hand up and foot back position with a huge fixed smile on her face until her friend got the perfect shot and she was whistled at by a passing security guard and told to move on as she was spoiling the chance of a picture for everyone else who were getting increasingly impatient waiting for her to move out of the way. Speaking of the field of miracles, getting a photo here without anybody else in it really would be a miracle and sadly not to be. 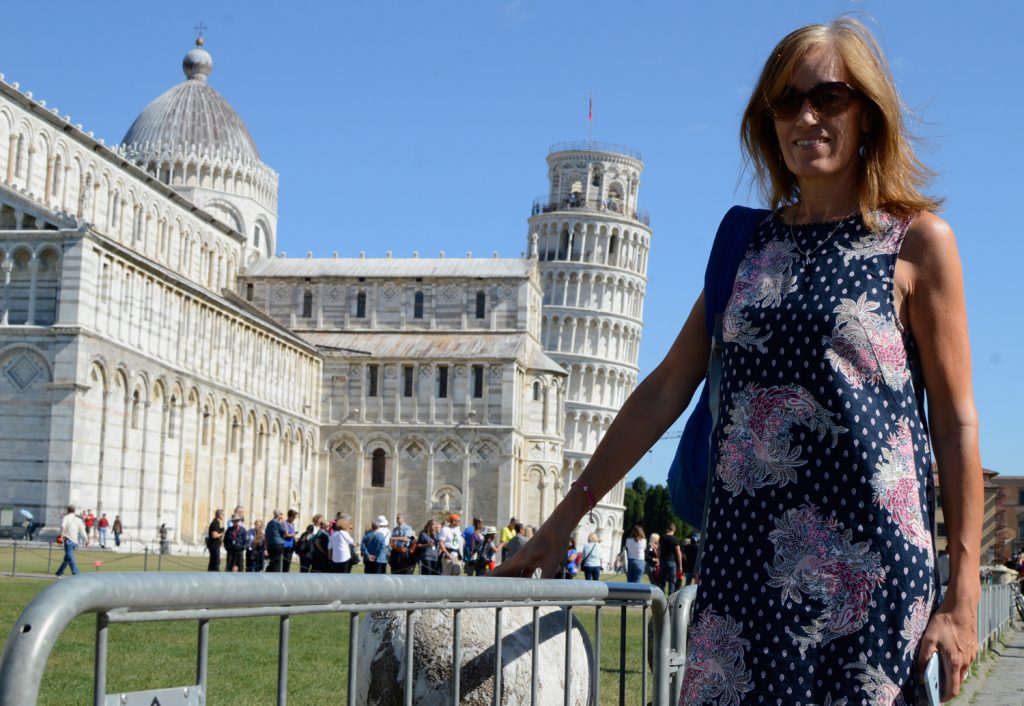 We bought a ticket to go in the huge circular Baptistery which at 55 m tall its almost as tall as the leaning tower and also has a slight tilt itself.  Standing proudly in striped grey and white marble, decorated with multiple open arches, tall elegant columns and intricate stonework the building measures 100 m in circumference with large green doors leading to the inside .  It houses a decorative marble octagonal font and has steps up to an eight columned gallery (the women’s gallery) stretching around the whole building allowing a view of the whole interior from above. While gazing down the attendant on duty entered the area below us and belted out a few notes showing off the acoustics which were very impressive.  This apparently happens every half an hour. 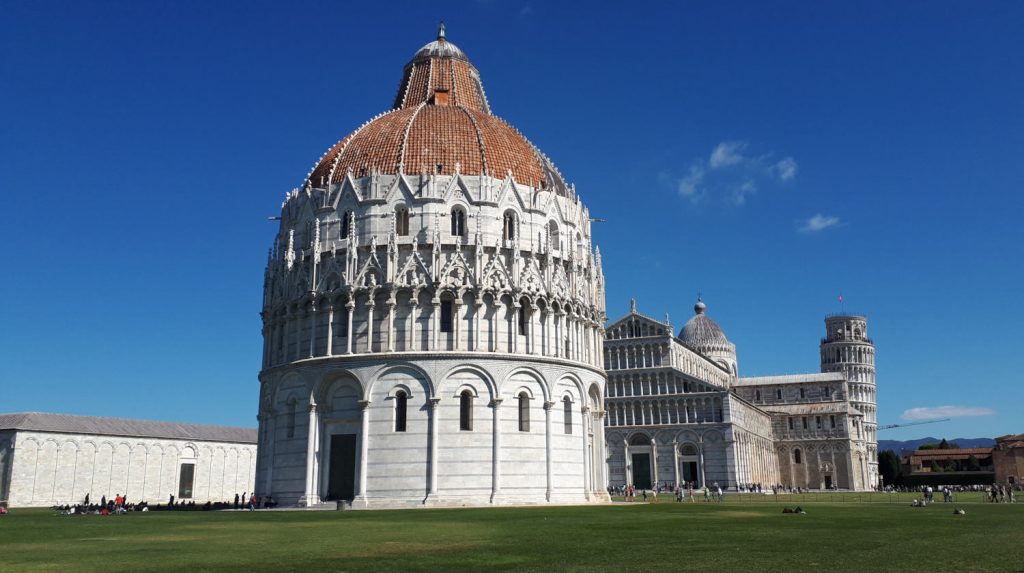 Our ticket to the Baptistery included free entry into the Cathedral which is where we headed next.  While from a distance the marble appears virtually white, close up the beautiful shades and different tones can be properly seen and appreciated, along with the exquisitely decorated columns, mythical creatures and bible scene depictions in both impossibly detailed carvings and painting.  The cavernous interior imposes on you from every direction, from the magnificently decorated ceiling and precious 8 sided marble pulpit (considered to be the most important structure in the Cathedral and finest example of Italian Gothic sculpture anywhere) to an improbably high staircase snaking upwards to a small door on the back wall. 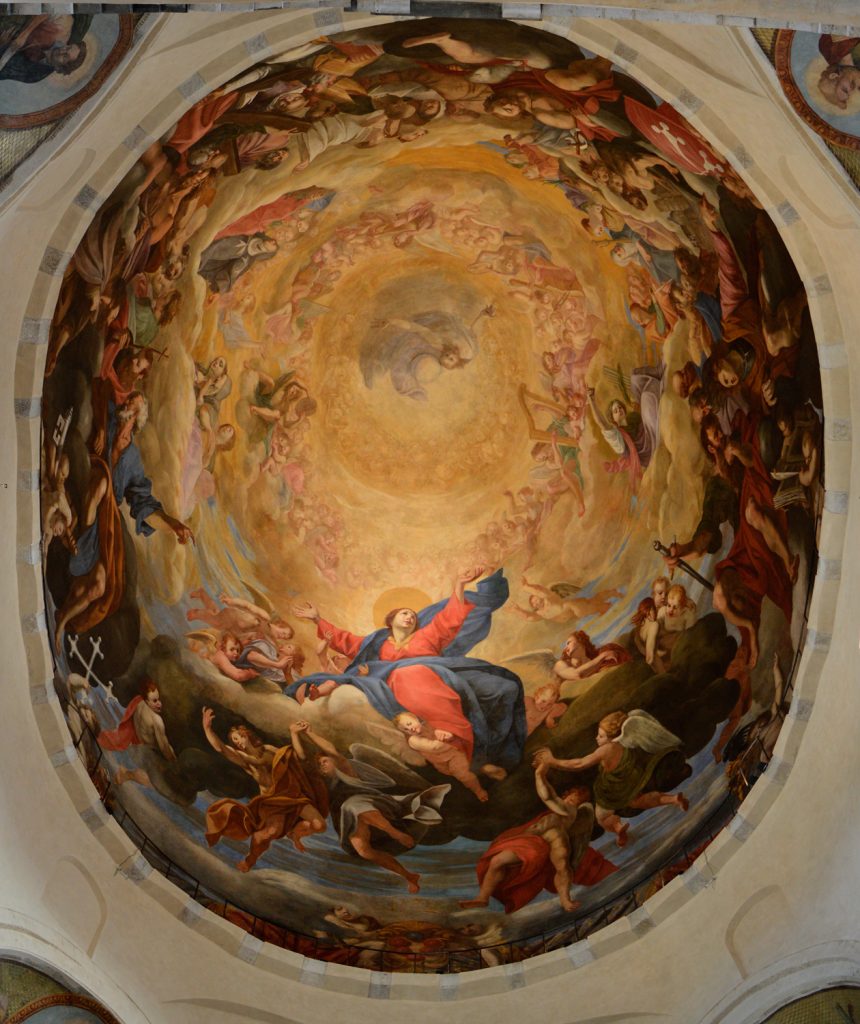 Moving along but still within the Piazza we came across the enormous Fallen Angel sculpture by Polish artist Igor Mitoraj, who died in 2014 at the age of 70, a celebrated sculptor specialising in fragmented sculptures of the human body. 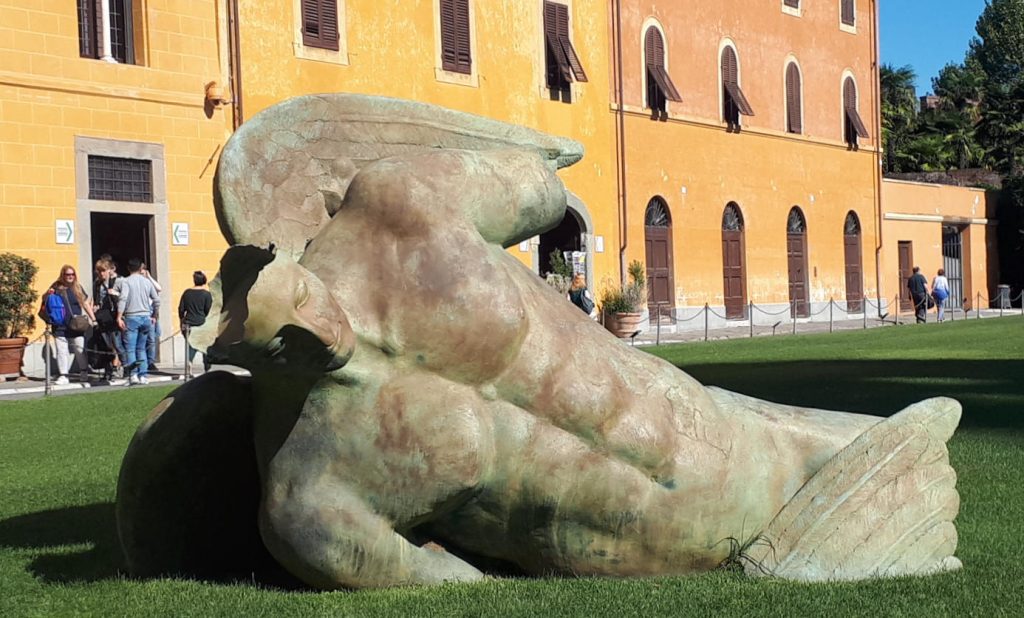 Leading away from the main sites the streets are lined with never ending restaurants and cafes offering everything from coffee and beer to pizza, pasta and Menu del Giornos, each with a tempting display on a stand on the terrace hoping to tempt you in, including the biggest calzone we’d ever seen.   There were also some interesting ‘leaning pastries of Pisa’ on offer, or perhaps they were called ‘leaning towers of pastry’, we’re not sure – puff pastry columns filled with chocolate by the look of it.   As we had eaten an early lunch in the motorhome before coming into town we didn’t eat out but had a reviving cup of coffee at the counter in a corner cafe overlooking the tower, narrowly avoiding paying nearly four times as much just for the privilege of drinking it out in the street. From our viewpoint here we could see a few horse and carts arriving, getting ready to take weary tourists back to their hotels, one scoffing greedily out of the nose bag attached to his bridle. 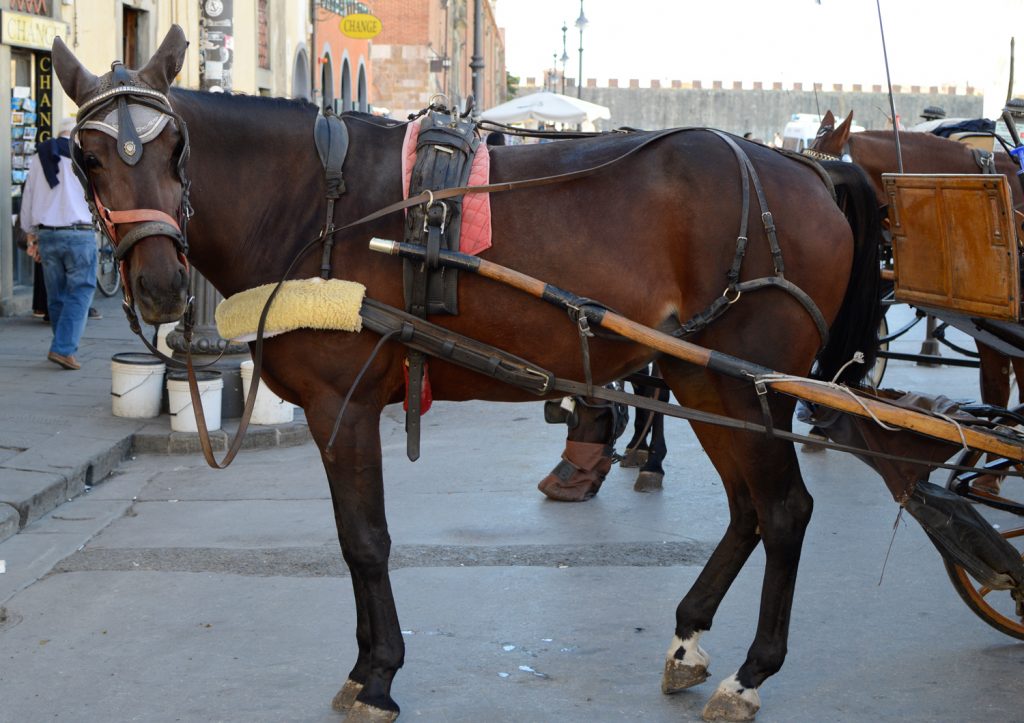 Carrying on we came to the wide, open Piazza dei Cavalieri (The Knights’ Square). An attractive square and home to the Scuola Normale Superiore di Pisa (school of higher education) and the 17th century Palazzo dell’Orologio (Clock Palace) decorated with fading frescoes, formed from two medieval towers joined together with an arched passageway through its centre.  The square is open to traffic and while there was a not a lot of it, there didn’t seem to be a specific route through and cars seemed to come out of nowhere and dart off in whichever direction they felt like, ending up in the quite narrow passageway shared with pedestrians. 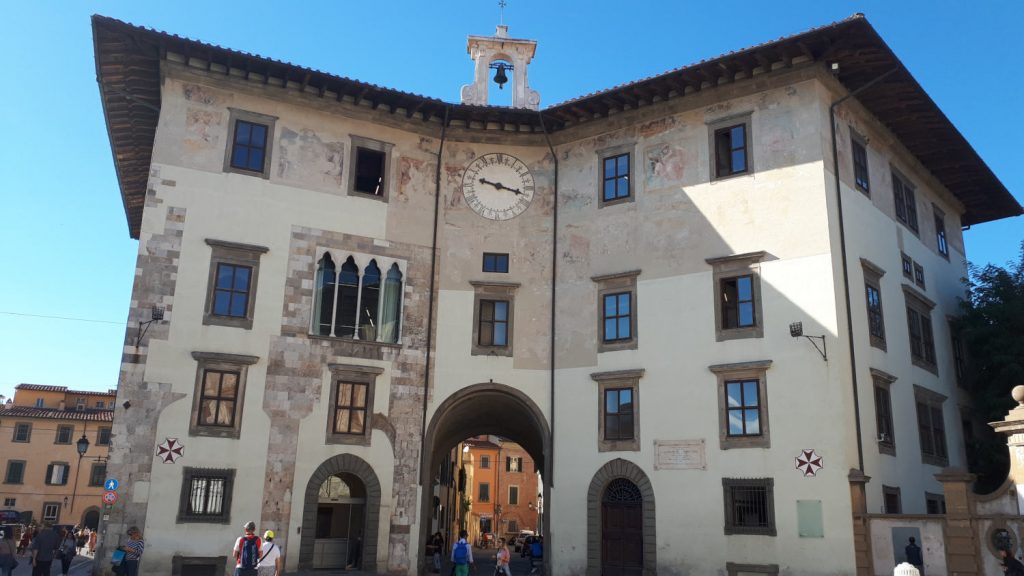 There are other parts of Pisa to explore and in fact this site is right on the edge of the town, but we saw what we wanted to see and decided to get going.  Strangely the walk back to the motorhome seemed to take twice as long as it did going but maybe that was just the effects of the heat and feeling a bit weary at the end of the day. Arriving back at Buzz with time still left on our parking ticket we put the kettle on and started plotting our next move …..