Hamming it up in the 2nd Highest Village in Spain

Hamming it up in the 2nd Highest Village in Spain

Already on a high after our walk in Monachil we decided to go even higher – to the 2nd highest village in Spain! At 1,486m above sea level Trevelez nestles in a gorge at the foot of Mount Mulhacen and as you approach it looks like a little white cluster surrounded by green and as it was late afternoon the whole town was in shade giving it quite a gloomy first impression. Getting there wasn’t without a little bit of drama. It’s a long, steep and winding road to get there, traversing the mountainside and negotiating a fair few twists and turns along the way. We were quite amused when we noticed an advisory speed of 50kph but if we wanted we could do 80kph! I don’t think we got past 30. 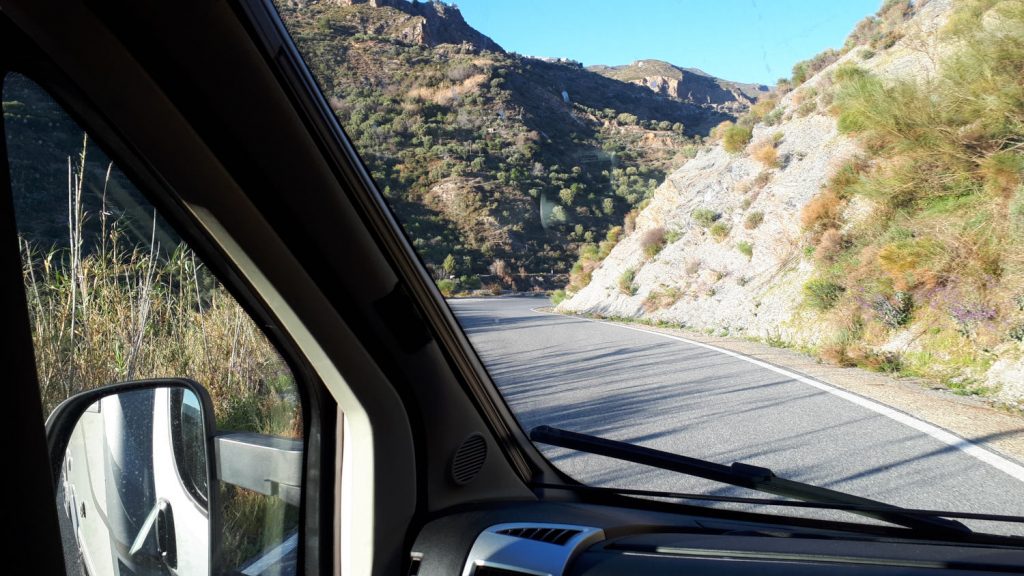 It was all going fine until we accidentally missed a turning and ended up on the wrong road with nowhere to turn around. All the laybys were on the opposite side of the road across the solid white line you’re not allowed to cross and as many of them were on blind bends we didn’t want to risk it. Not only that but being in the middle of nowhere with up until then barely another vehicle in sight, we suddenly realised that we had a police car right behind us! Where he came from we haven’t a clue. One minute he wasn’t there, the next minute he was! Eventually he got fed up crawling up the hill behind us and overtook and shortly afterwards we found a place to turn around. Phew! We got back to our turning and it was then just a mere 21km up and around the mountain on a road barely wider than Buzz. We do love a challenge! 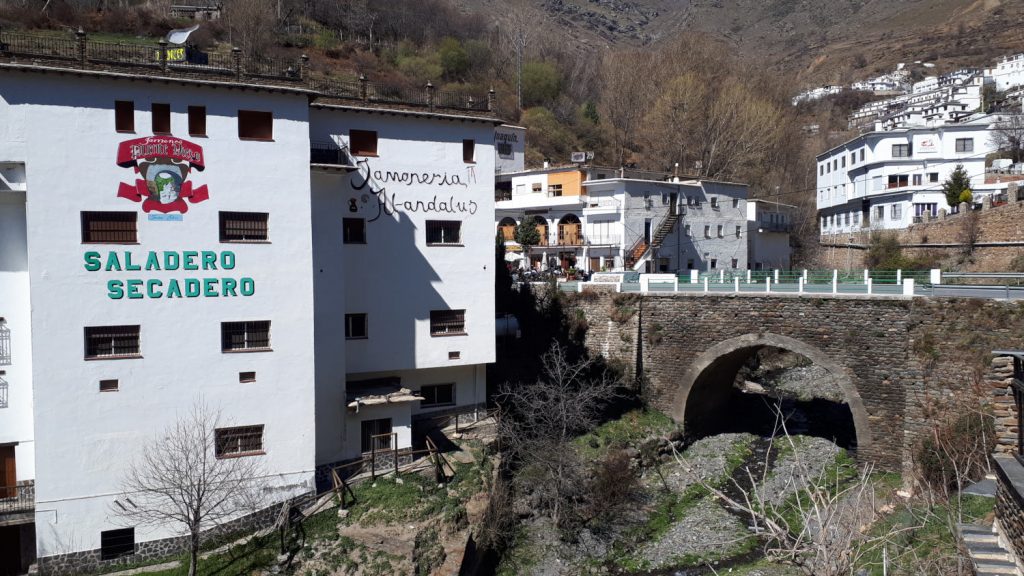 The village of Trevelez, at 1486m above sea level

As we drove into the village something really unusual happened. We could instantly smell cured ham! We knew that the village was renowned for its air dried hams but we weren’t expecting that. It was quite cold outside and we had the windows of the motorhome closed as we were driving but it permeated the air and came wafting in. You could tell is was dried ham too, not just any old ham and it smelt really incredible. The sweet, salty smell had us almost drooling at the thought of tastings to come the following day!  The motorhome parking was in the car park virtually at the very top of the town and we weren’t surprised to find that we were the only motorhome there. We stayed in for the evening and went on a walkabout the next day when we were pleased to see that the sun did manage to reach the crevice of the village and it was a lot warmer than when we arrived. 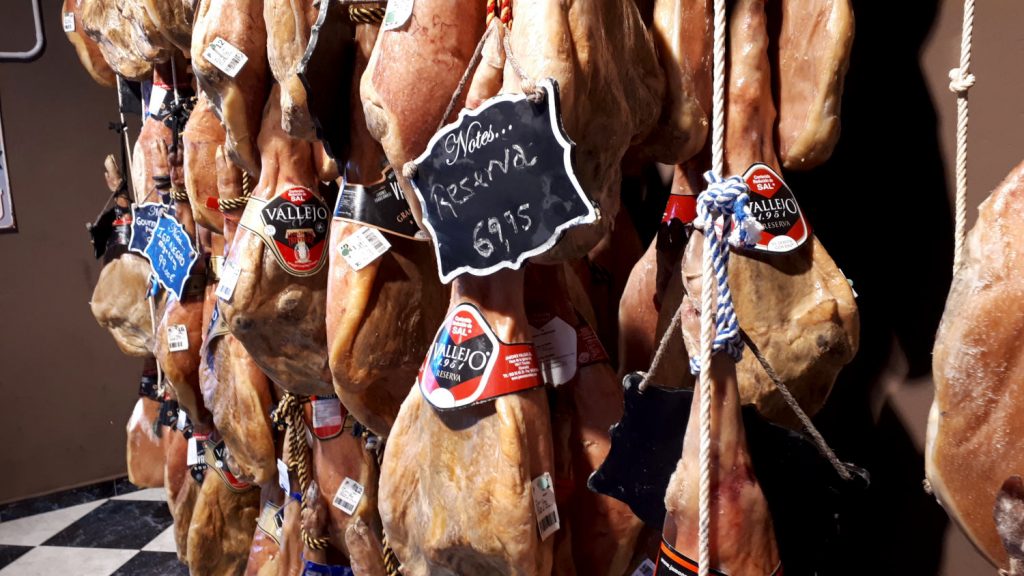 Trevelez is only small with a population of about 800, most of which are probably involved in the cured meat industry in one way or another. We couldn’t begin to imagine the logistics of living somewhere like this, it’s so cut off.  Apart from ham shops and warehouses the only food shops we came across were a tiny convenience store and a little bakery. Hardly big enough to do your weekly shop!   We saw quite a few delivery vans coming and going and hams hanging everywhere. In every shop, doorway, garage, building, you name it!  We even saw a new building being fitted out with all the hooks built into the ceiling, as if there weren’t enough already.  The air is special here, it’s windy and cool and because of that the hams cure and dry with less salt making them sweeter and highly sought after. The village won the right to use the Royal seal in 1862 when Queen Isabel II gave her approval so the hams have a wax seal to show their authenticity – high praise indeed for one of the highest villages in Spain.  Small but mighty no less! 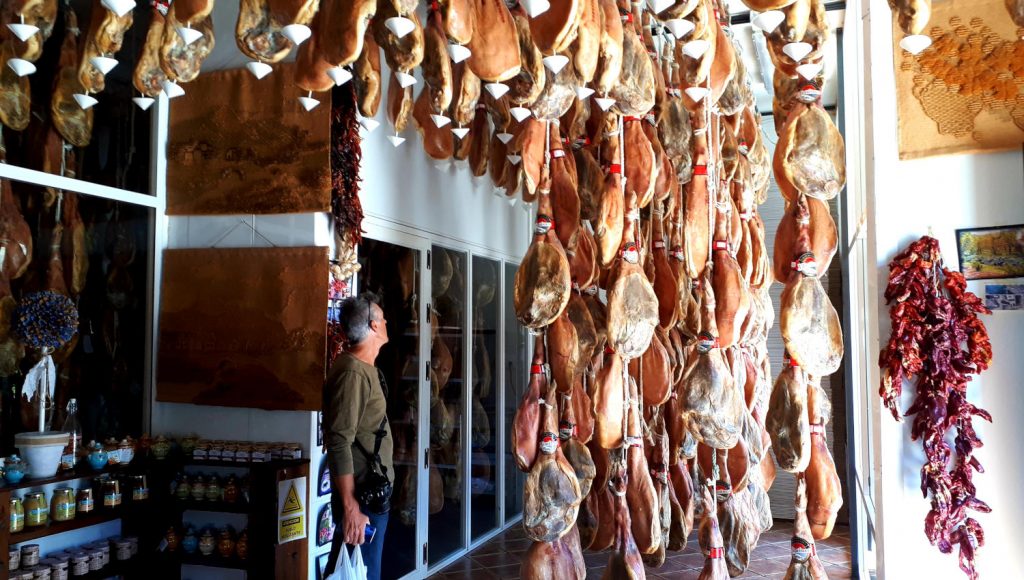 The motorhome parking was free and as we often do we chose to spend our money in the village as a thank you. We also just wanted to try some local goodies anyway so not having to pay for parking meant we had more money to spend in the local shops. It was all downhill on the way for a change and we went in a few ‘jamon’ vendors before buying some Serrano ham in a shop where we were given some tasters to compare the Serrano with the Iberico. The Iberico is noticably sweeter with a creamier fat and very delicious but we preferred the slightly salty Serrano. 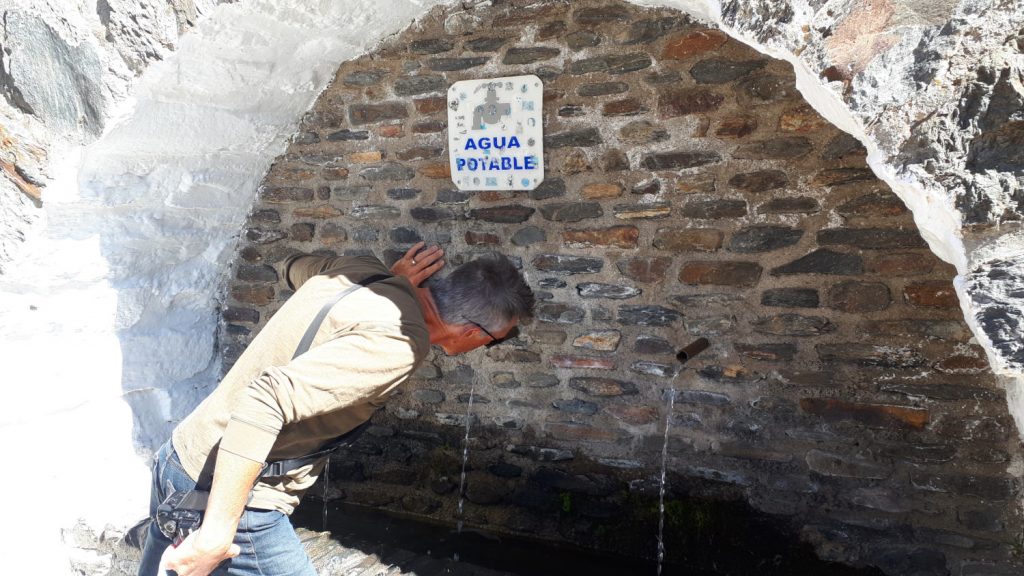 Fresh mountain water from the fountain!

Having traipsed around the entire village, drinking the fresh mountain water from the fountain and having a coffee in the cafe we did our buying on the way back up, ending up with a bulging bag full of cured ham, chorizo sausage, freshly baked bread, sweets made from local mountain honey and thyme and some dark sugar free locally made chocolate. Not a bad haul of goodies from a tiny village in the middle of nowhere. 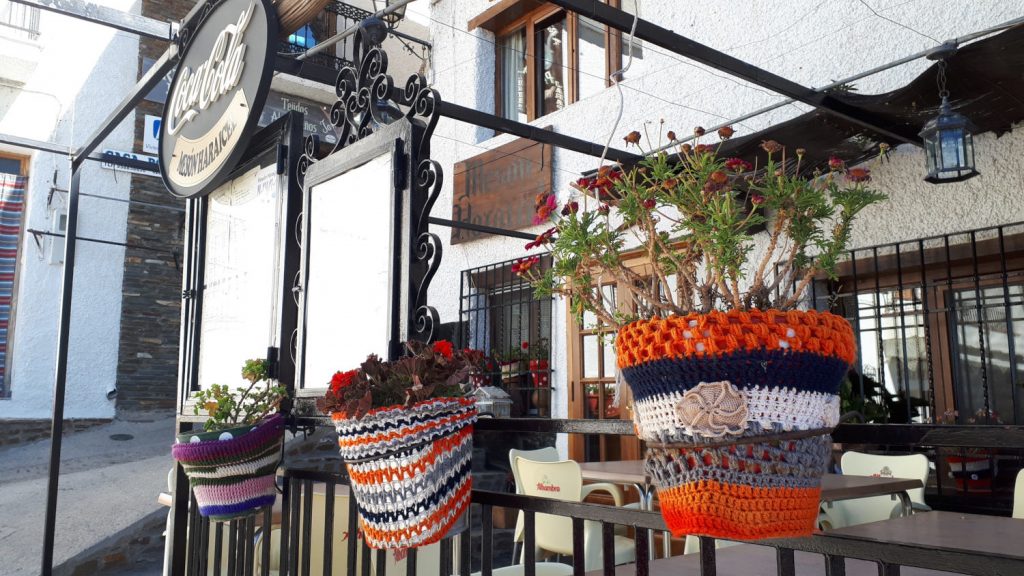 Small cafe in Trevelez with flowerpots in knitted jumpers!

Something else that caught our eye were the colourful, woven rugs hanging up outside quite a few of the shops. Known as jarapas, they’ve been made in the Alpujjaras region for centuries and were originally used under mattresses to insulate and protect them from the rough bed bases. The tradition is Arab in origin and almost died out a few years ago but was invigorated after a government drive to keep artisan crafts alive and they were re-imagined and marketed as decorative accessories which have proved very popular with tourists. They are all hand-made on looms from wool or cotton in a rainbow of colours and we were almost tempted to get one for the moho!  Having explored the village from bottom to top we carried on back up to the car park at the top and back to Buzz. 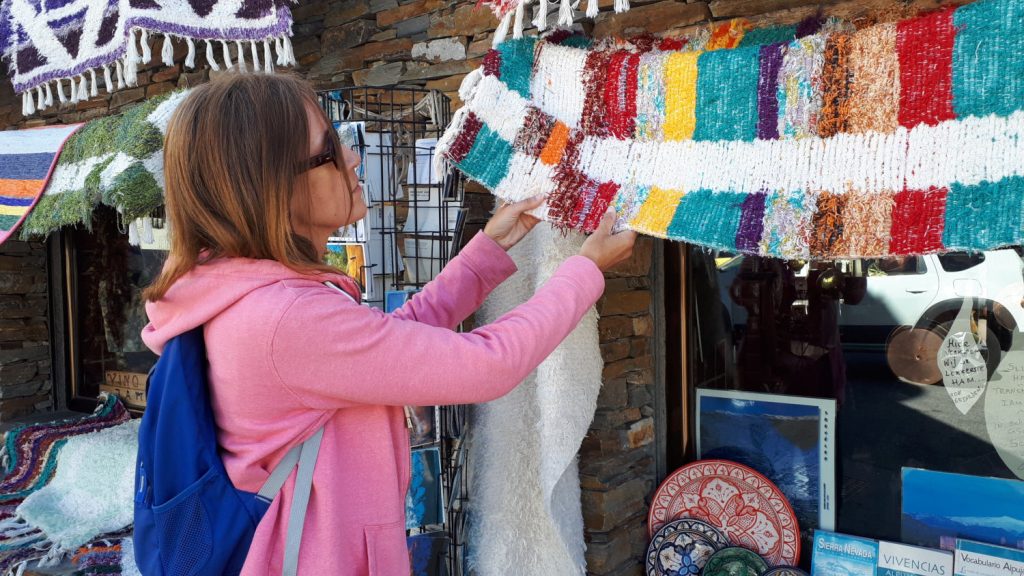 After a lovely lunch in the motorhome, tucking into our newly bought goodies along with our previously bought cheese, tomato jam and other bits and pieces, we made a move to the small town of Canjayar. It was the nearest place we could find with services so we could top up with water so we could have a shower in the morning. Services are few and far between around here but it was only an hour’s drive and we enjoyed the countryside along the way. Sometimes it’s just good to drive, looking out at the scenery, enjoying the journey, seeing the changing landscapes and that’s what we did.