Heading straight from Aachen Buzz Laika took us to the Liege Christmas market next, where we decided to park on the outskirts and get a bus into the city centre. We had read there was a park & ride at Rue du Gosson in Jemeppe, Seraing and there was plenty of parking just along the road with a short walk to a main bus stop. The ride into the Place de la Republic Francaise cost 5euro return taking around 25mins, from the stop it was a short walk to the start of the Christmas Market in Place Saint-Lambert leading onto the main area at Place du Marche. 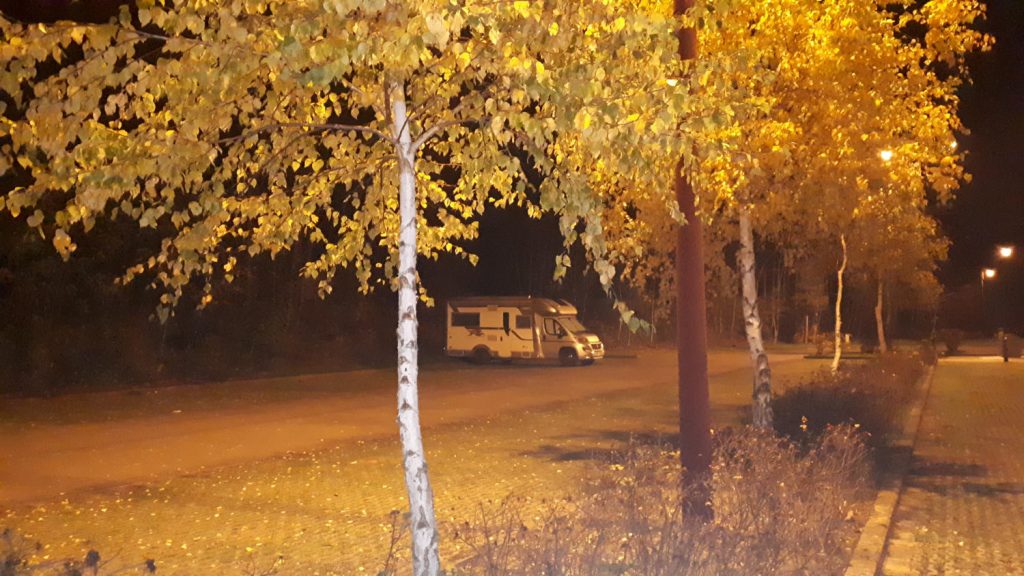 Walking around the stalls in Place Saint-Lambert first we started to get a feel for the local specialities of sweet, nutty nougat, different varieties of cheese and the most obvious Liege Waffles, made with a mould with 24 holes and round corners as opposed to the square Brussels waffle. The Liege waffle didn’t make an appearance until the 18th century when a chef to the Prince-Bishop asked him to come up with something sweet and tasty, which he did by adding lumps sugar to the batter mix and so the Liege Waffle was born sweeter than standard waffles with little caramelised sugar bombs in them. We would obviously have to try one but it was too early so a bit of exploration was required first. 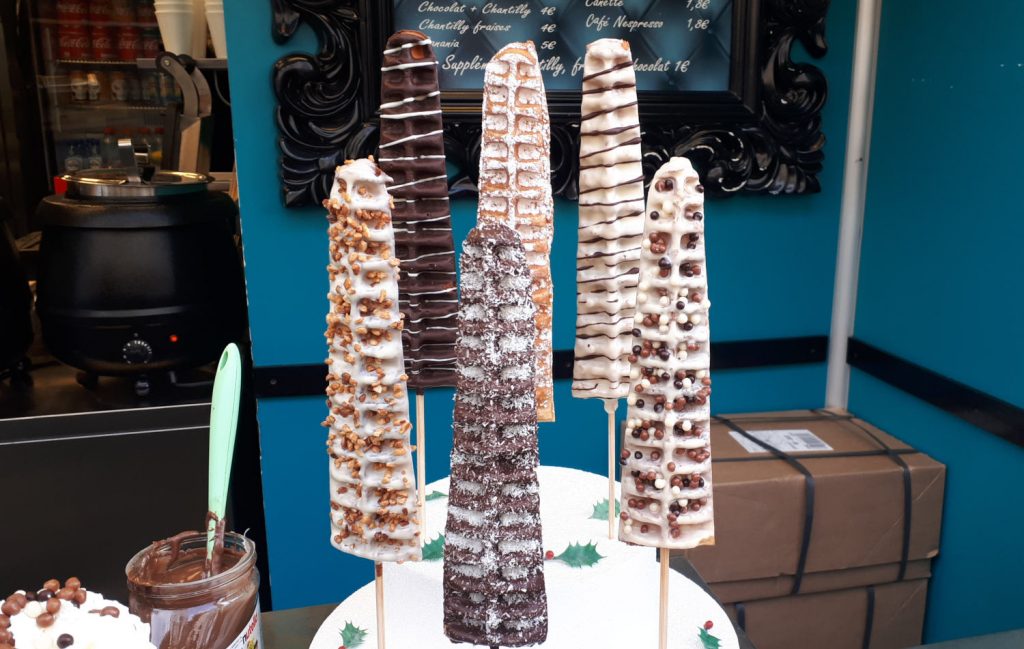 Waffles on a stick, dipped and dunked in an array of toppings!

The second larger part of the market is set up in the bigger Place du Marche, where they have a Ferris wheel and little toboggan hill as well as the main food and drink area. As we walked through the delicious cooking aromas wafting around were hard to resist but we wanted to look around some of the city before indulging, heading first for the pretty street of Hors Chateau where we found several of Lieges most famous landmarks not least of which is the lung busting Montagne de Bueren. 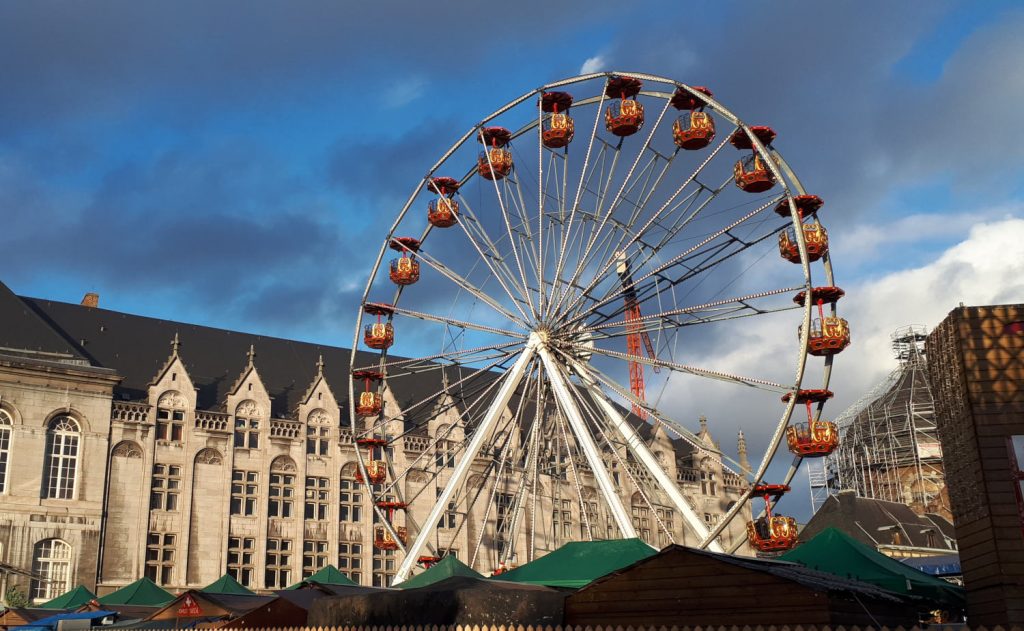 A feat of engineering for the 19th century 374 steps climb straight up the side of the hill climbing hundreds of feet and I can guarantee it is hard work walking up them, in fact it was hard work looking up them. After a steady wheeze to the top, stopping to take the occasional photo (Good excuse)  we stopped to admire the view. Before walking on up to the war memorial at Boulevard du Quatorzieme de Ligne , which required a few more steps but had even better views over the city. However hard it was wheezing our way up it was even harder watching a young woman run up past us, then down again, then as we were walking up by the memorial she came past again (the extra steps) then just to rub salt into the wound she passed us for a 3rd time as we went down, we were utterly exhausted watching her. 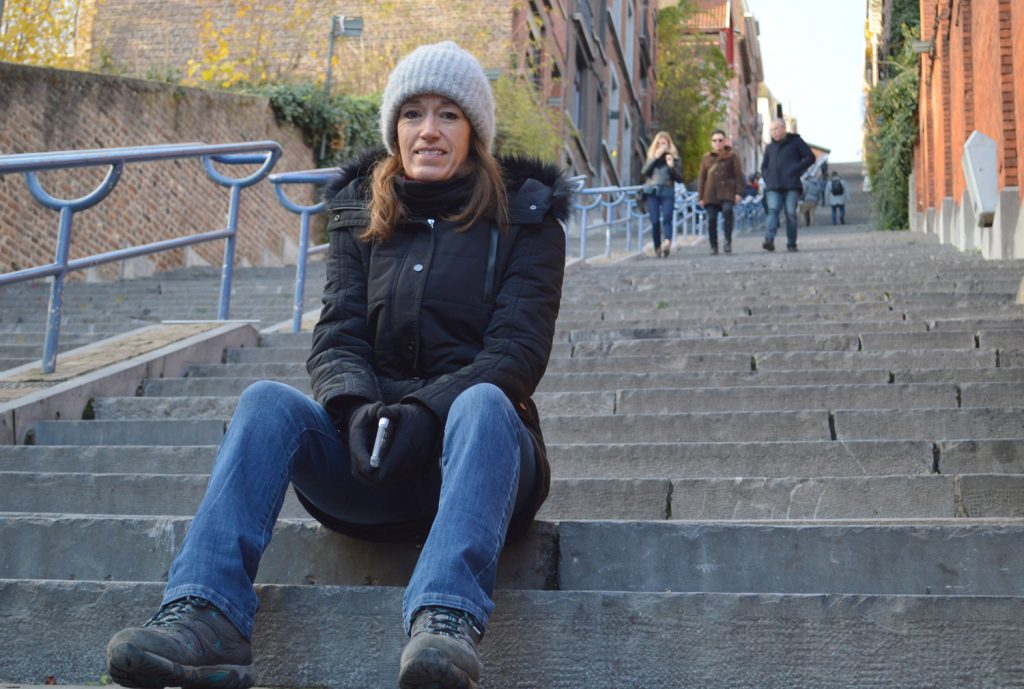 Taking a rest half way up the 374 steps!

Taking the much easier walk back down the steps we headed towards the Tourist Office in the Ancienne Halle aux Viands, the Butchers hall built in 1546 it is one of the oldest civil buildings in the city. We gathered our usual collection of maps and information while admiring this old building, before dodging the youngsters practising skate boarding out side and taking the short walk across the road to the banks of the Meuse. It looked very different from the last time we saw it, in a more rural location at Dieue -sur-Meuse on our way to Metz. From there we headed back towards the market walking through and admiring the old pretty streets. By now it was feeling like time for a waffle followed by a nice Vin Chaud. After walking around the numerous waffle stalls in the market we decided where we wanted ours to come from and made our choice, Marcella chose a dark chocolate and chantilly cream, which had battons of dark chocolate in the waffle. I decided on chocolate maison blanc or the house melted white chocolate warm and oozing poured all over the waffle.  Very rich, very tasty and very filling. The Vin Chaud being the perfect follow up to counter the sweetness of the white chocolate.

Lingering over our Vin Chaud the sky was darkening as evening drew and we walked around looking at the stalls and trying little bits of local produce. We came across a stall piled high with sweet looking purple pyramids, or Ghent Cuberdons. We found out that they were created by a pharmacist who accidentally left some cough syrup out overnight. In the morning he came back to find it crusted over but still gooey inside. So inspired by what he found, he set up his own sweet shop and created the cuberdon, or as the Belgians like to say ‘little noses’ and flavoured them raspberry.  They were sold all over the city in the 19th century stacked up on barrows and bicycle carts.  They’ve only recently been found outside of Belgium and are now available in many other  flavours and colours. 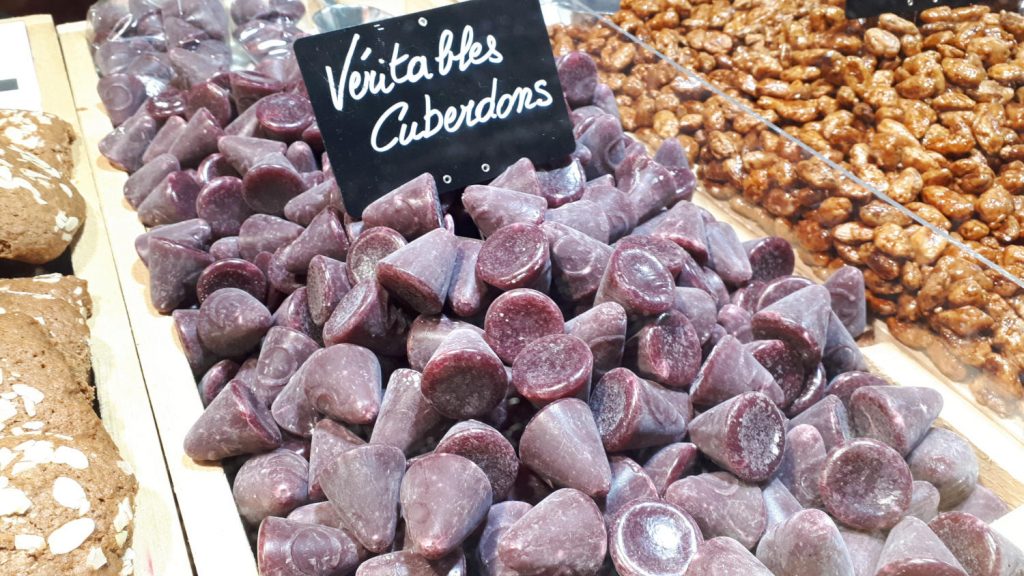 Cuberdons – raspberry sweets the Belgians like to call ‘Little Noses’

By now the market was very busy with people eating, drinking and having fun and the food stalls were in full flow. Selling everything from hot dogs through to tartiflette, cheeses, cured  saussicon (sausage) and plenty of beer and Vin Chaud. Then before long it was time to make our way back to the bus stop and back to Buzz before heading onwards to the next stop on our short tour of Christmas markets.