The Minho – A whistle stop tour

The Minho – A whistle stop tour

With our time running out we decided to do the last of Portugal the northern Minho area quickly, largely as the weather was not looking good for a few days, Visiting 4 places in 2 days, which means we have missed some bits out. However what better reason can we have for coming back to finish properly. 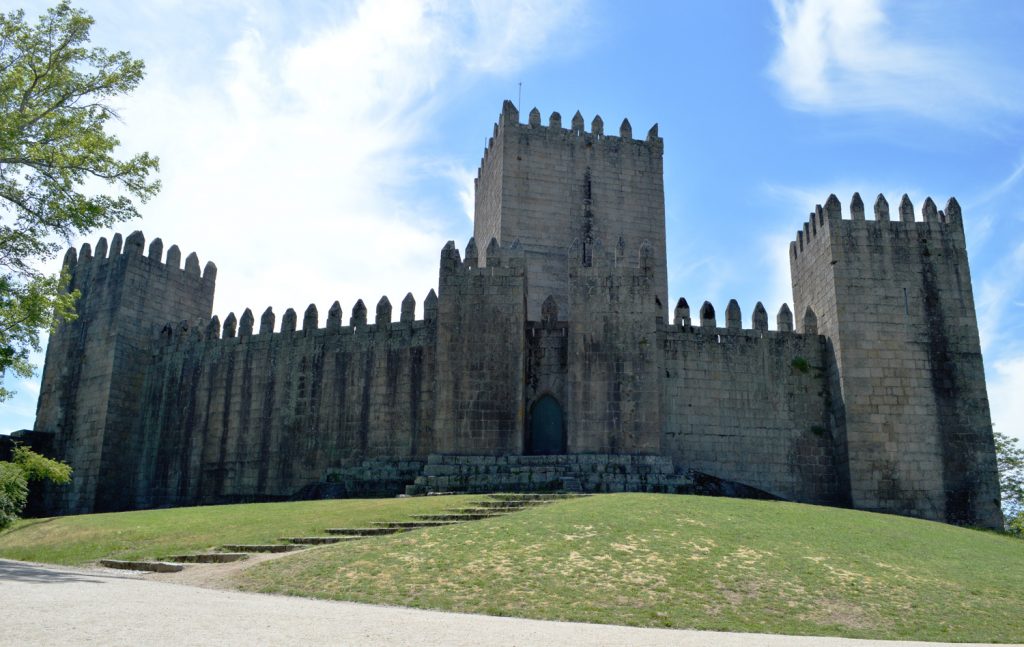 Our first place was the lovely town of Guimaraes originally the capital of the fledgling state of Portugal at its first formation in 1143. Today this lively town is another of one of Portugal’s amazing UNESCO World Heritage sites and was European capital of culture in 2012. As you come into the town from most directions the first thing that strikes you is the large Castle perched on top of a granite outcrop. Sitting atop of a hill, being built largely of granite itself although not that big it is an imposing site and very much in the style of early Norman castles. One of the other dominating buildings, the Paco Dos Duques de Braganca (the palace of the Dukes of Braganca) has been through several transformations and is still the presidential place of residence when in the area. 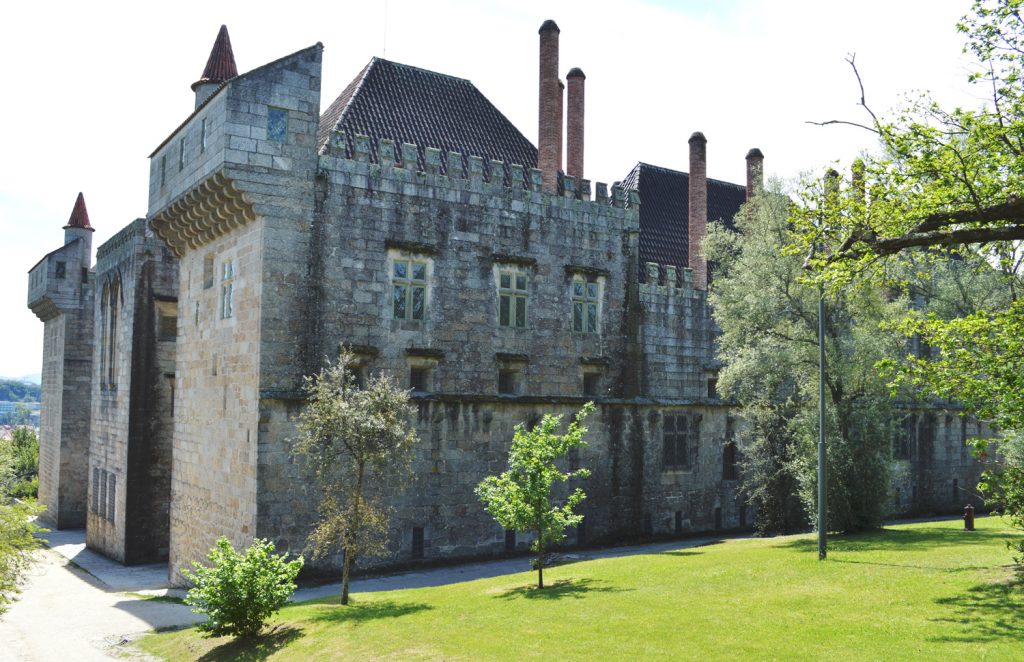 As this was more of a flying visit we just wandered the old streets of what is a lovely town, that reminded us in parts of the Alsace in France, with nice and very busy squares full of restaurants and bars. The place had an air of self belief exuding confidence and history, without doubt and leaving aside the old historic buildings the Largo da Oliveira is the beating heart of life in the town. We could happily spent more time here, there are many fine architectural buildings here but also fun to be had. Alas for us it was onwards towards Braga for an overnight stop and to the stunning Baroque sanctuary of Bom Jesus do Monte on the slopes of Mount Esphino. The site was newly declared World Heritage by Unesco in 2019. 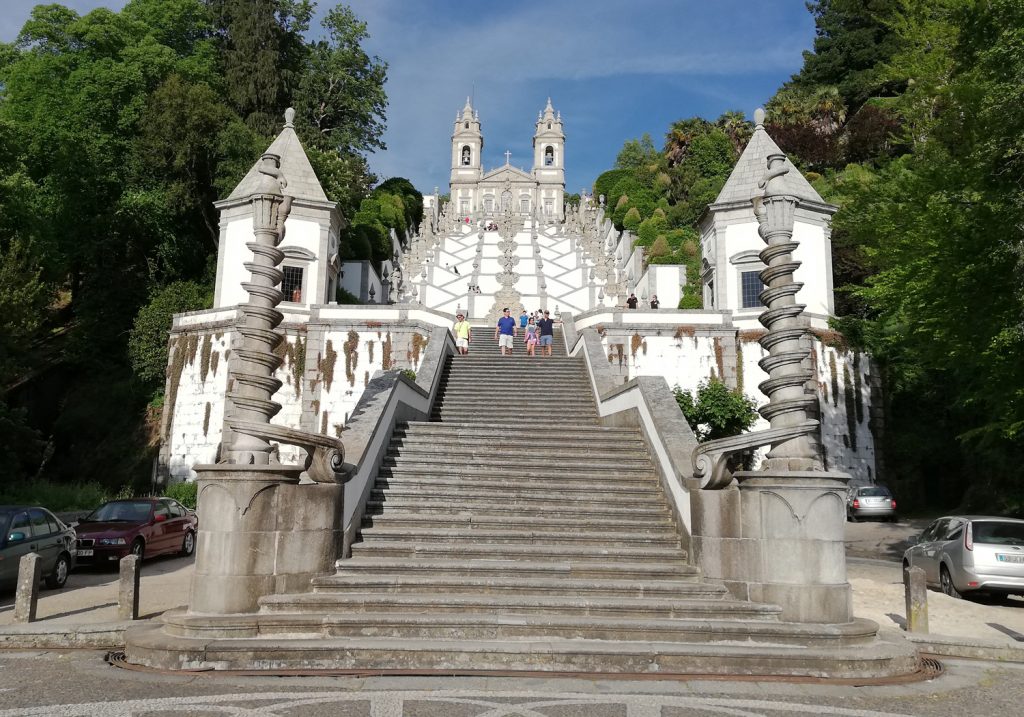 We parked at the free aire at the lower Bom Jesus do Monte car park which was full of Spanish families enjoying a picnic or BBQ. As the weather was fine and being early enough as well as the promise of rain we decided walk up to the Church straight away.  Now this is no ordinary walk up and there are hundreds of step in 2 sections. The first section consists of a series of flights from the car park to approximately half way and each flight starts with a small chapel containing a 3d biblical scene. The second set is an amazing series of flights each with a landing, 2 chapels and a themed fountain in the middle and it looks a formidable climb. Amazingly because you keep stopping to look at the various distractions on each level the climb is fine and the view just improves on each landing. 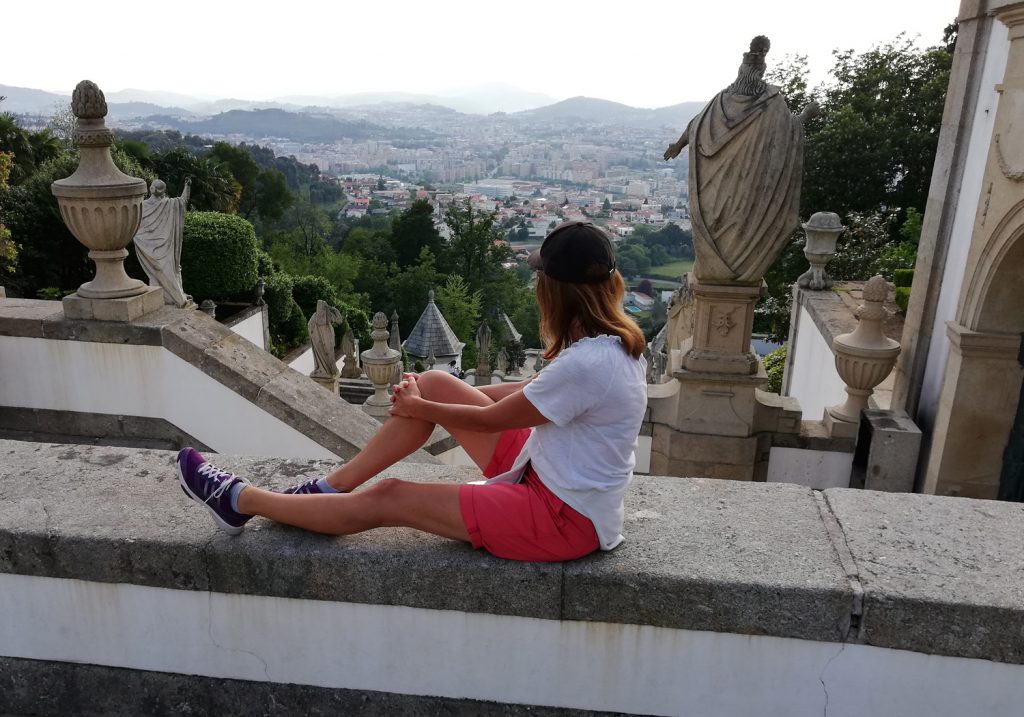 Once you reach the top the views are stunning and there is plenty to see at the top, with the church, a man made grotto, gardens and even an hotel. Strangely the church is fairly ordinary, although I must put that into context. If you went straight from your local parish church you would be amazed but when you have seen just a few of the churches we have seen over the months then it isn’t anything special. The setting and everything else though is and well worth the climb up, however there is a funicular you can take if you are likely to struggle. As for us having looked around, which we had intended to do in the morning we made our way back down with the intention of coming up again in the morning with a better sun for photos. Unfortunately the morning only brought rain, so we didn’t go back up and with time on our journey running out we headed on to our next chosen destination, Pont de Lima. 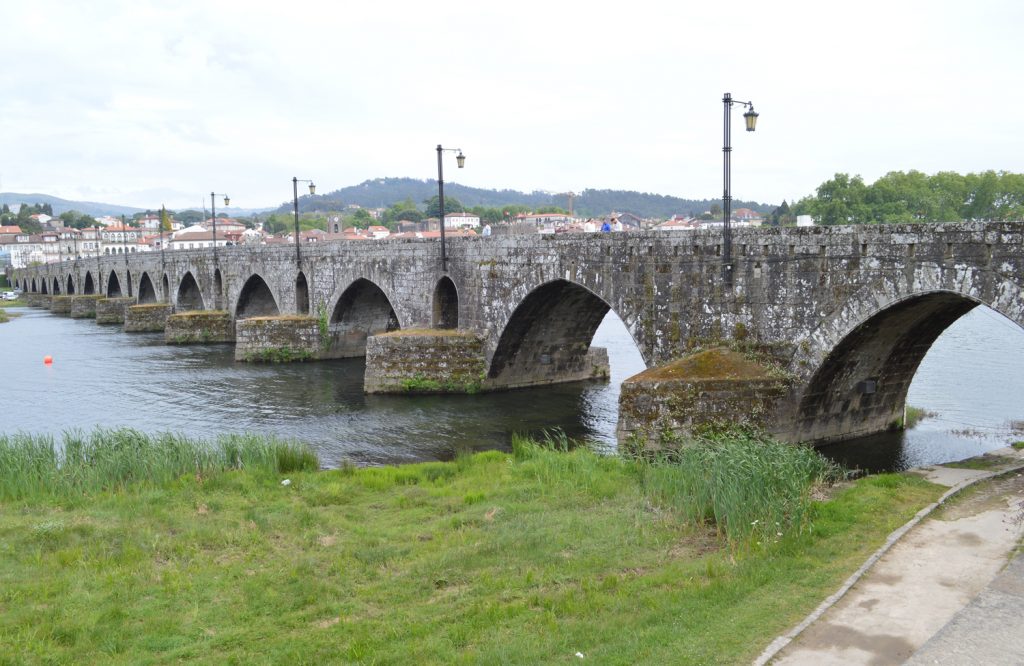 Pont de Lima as the name implies is all about the bridge, well it isn’t really just about the bridge. It was also on the previously mentioned ‘Rui’s list’, sitting astride the Rio Lima with it’s ancient bridge which in its current state dates from the mid 1300’s although there have been some alterations along the way. The bridge is pretty much as it was when it was built though it is one of several bridges to have crossed the river going back to Roman times. We parked up in a huge empty car park just a couple of minutes walk from the old town. We made our way along the river to the bridge and the historic centre of this small but pretty town, including some of its old defensive towers and walls spending a nice relaxed hour walking round and having a cold drink before crossing the bridge to the other side. 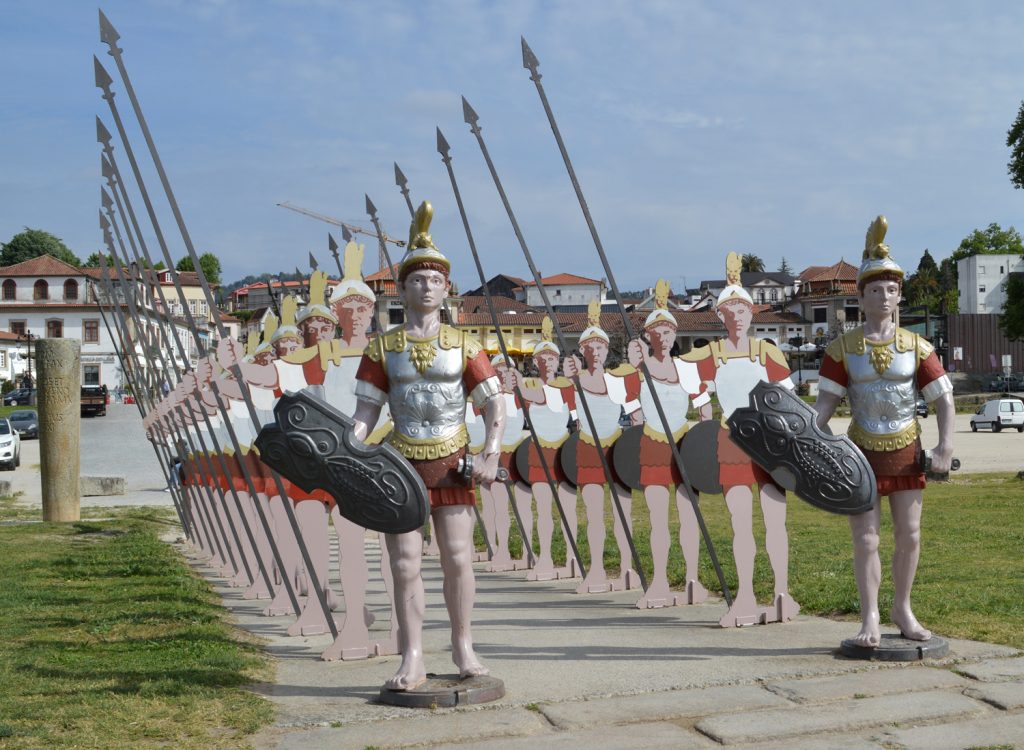 Which brings me to one of the quirky little features of the river banks – legend has it that as the Roman legions advanced they stopped at the Rio Lima and refused to cross believing the river to be the River Lethe the “river of forgetfulness, a mythical river from the underworld” believing that if they touched or drank the water they would lose their memories and never return home. The legend has it an enterprising General rode across the river and called his soldiers over individually by name and thus the crossed the river. The town recognises this legend by having some metal statues of legionnaires on one side of the river and a statue of the General on the other beckoning them over. For us however Viana Do Castelo was beckoning on our whistle stop tour of the Minho. 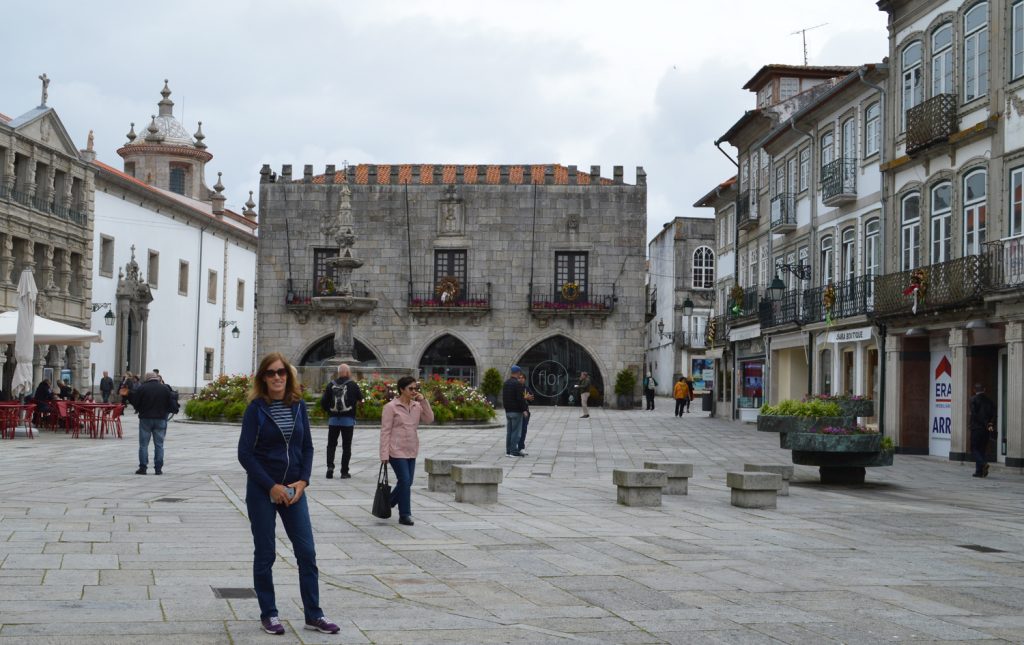 Sitting on the estuary of the Rio Lima about 25km from Pont de Lima and is a pretty town with some lovely buildings as well as having it’s own hill top church Monte de Santa Luzia. Although not as big and impressive as Bom Jesus a Braga it is nonetheless worth a visit but you might as well take the funicular as it is only a couple of euro return and the walk up is longer and not nearly as interesting. The funicular is a nice easy ride up but be warned it is not that big and if it is busy you will likely end up waiting in a long queue. Once up there the views are as lovely as you would expect but the church is much simpler in design than Braga. As we went into the church we were treated to a nun walking around putting out candles while singing, then had a coffee in one of the cafes at the top before getting the funicular back down continuing our walk. Viana Do Castelo is a nice town with some lovely features and generally in good repair but our tour moved on to the border with Spain and the town of Valenca do Minho. 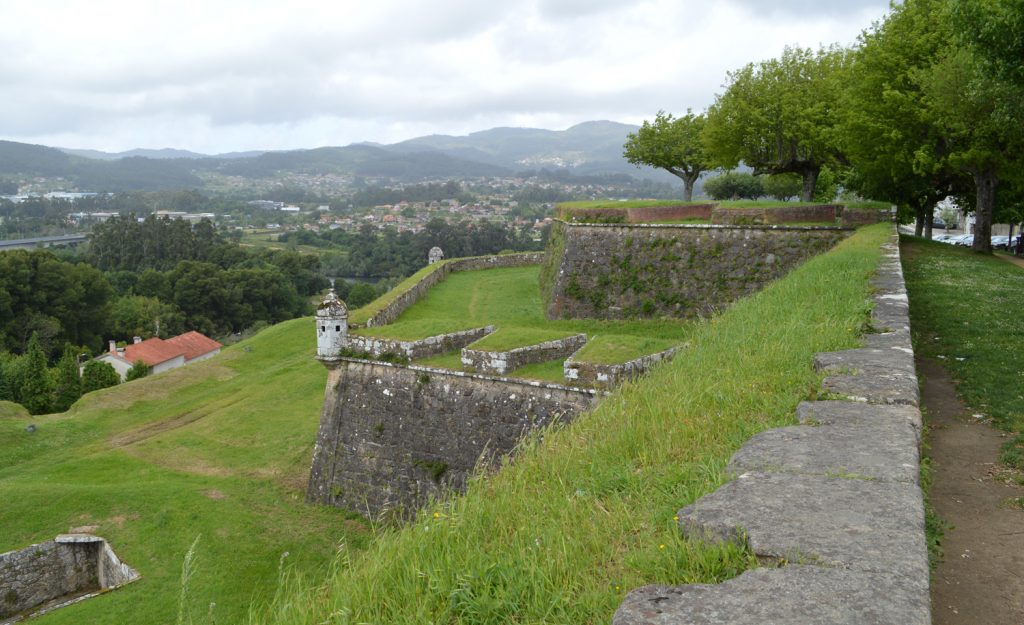 Valenca sits on the Rio Minho and border with Spain, and we parked for the night in what is an open car park in a wooded area at the bottom of the mound upon which sits the whole reason for being here the fortress. It’s a substantial fortress housing the old town and really is worth a visit. Walking up to the fortress you very quickly realise how big it is with a large double walled fort that used to have a moat in between the walls. The town is split into 2 parts with a wall between the 2, both have nice pretty little cobbled streets lined with shops, restaurants and the odd church or 2. One of the beauties of Valenca is you can climb up onto the walls and around the whole town pretty much unhindered. The best views are of Tui the Spanish equivalent on the other side of the Minho. The original fortress originates from the 13th century but the majority of the bigger more substantial fortress originates from the 17th century. There is much to see here and spend your money on, we sat and had a coffee sharing a glass of the most popular liquor in Portugal Beirao, which it must be said we have been promising to try for a couple of weeks and for some reason never had. As it turns out it was very tasty resulting in us buying a bottle to take home with us. 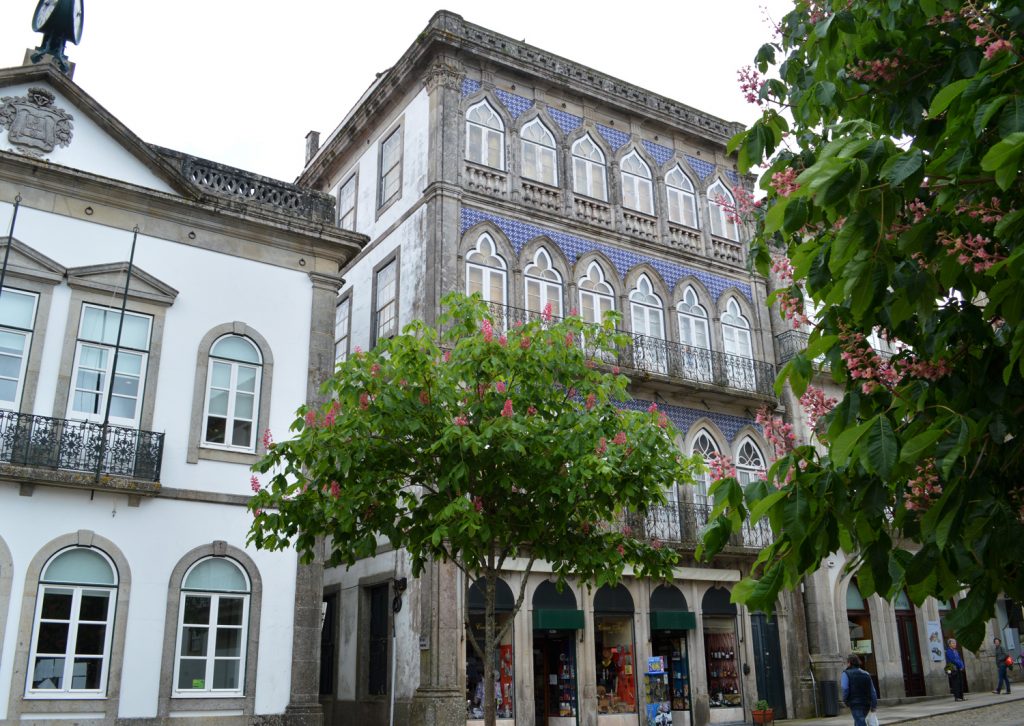 Valenca – Street scene inside the fortress

For now our time in Portugal was coming to a close as we head back into Spain to begin the reluctant journey home.  We have loved Portugal and will definitely be returning in future to continue our exploration of this lovely, friendly, slightly scruffy in places (in a nice way) country. If you have never been go and if you have but stick to the Algarve holiday hotspots then try somewhere else as it has so much to offer, so get out and explore.