Zaragoza is the capital city of the Aragon region in the North East of Spain.  It’s Spain’s 5th largest city but not so well known as some of Spain’s other cities and has less of the tourist crowds. It sounded like it had a fair bit to offer so that’s where we set off to next.  The city spreads out either side of the mighty Ebro River with the majestic Nuestra Señora del Pilar Basilica right on the river bank.   We parked the motorhome just opposite and walked over the Puente de Santiago bridge. 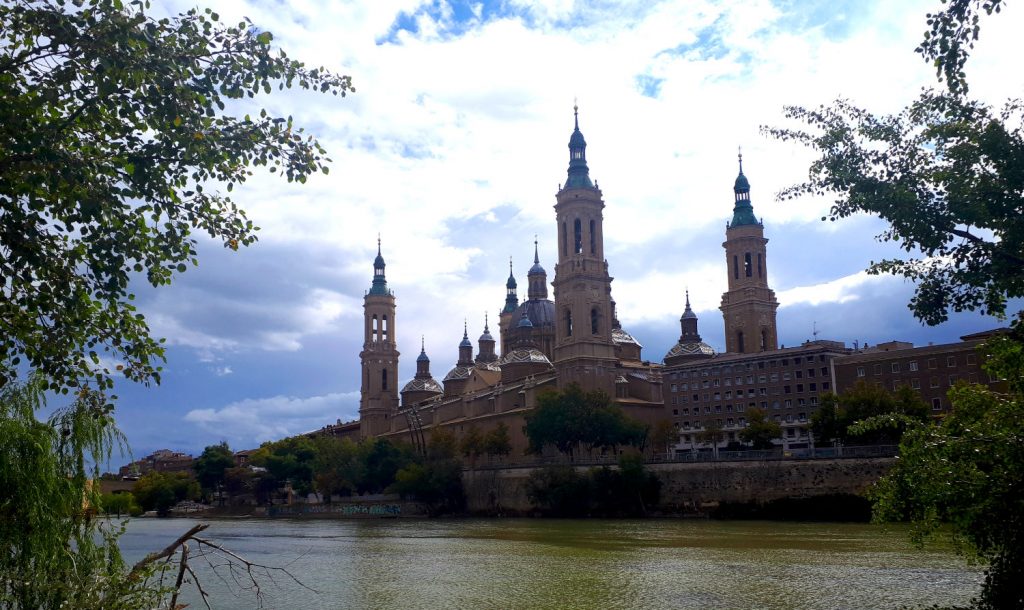 It wasn’t until we got to the Plaza del Pilar Square and saw a giant mountain of flower displays in front of the enormous Basilica that we realised we must have missed an event.  The baroque Basilica itself is huge and impressive with a sense of grandeur with a large tiled dome accompanied by 10 matching smaller ones.  We had a pleasant wander around the town and were about to stop for a drink at about 3.45pm but were turned away from each and every cafe/bar/restaurant as they all close at 4pm!  We took a circular route back crossing back over the river via the handsome 15th century Puente de Piedra old stone bridge and back to Buzz ready to move on. 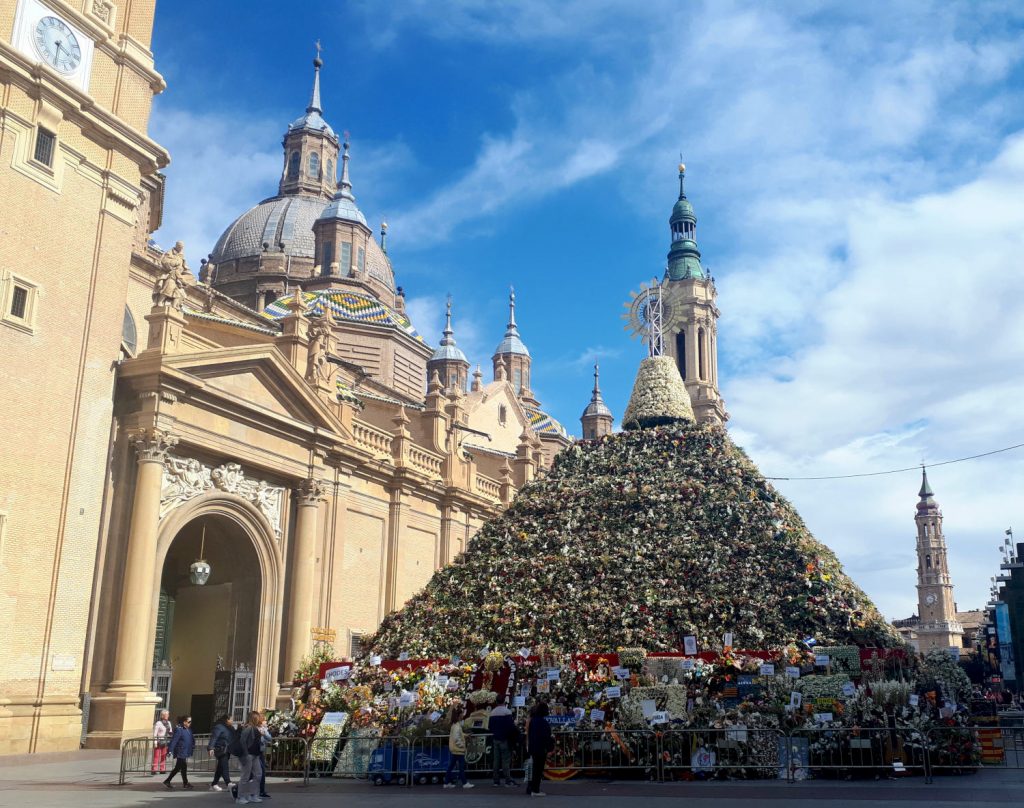 The giant flower tower in front of the cathedral

Later in the evening when we looked it up on online we found out we’d missed  Zaragoza’s biggest and brightest event of the year by just a few days. The Pilar Festival celebrates the city’s patron saint, the Virgin of Pilar, with a fabulous parade of 1000’s in traditional costumes carrying displays of roses, lillies, orchids and gladioli followed by an offering of fresh fruit the next day. The resulting towering pyramid of flowers and fruit was certainly quite a sight albeit slightly past its best!  There is also a mixture of music, entertainment and dancing including pop, jazz, reggae and folk to Flamenco and a dance called Jota from the 1600s.  Such a shame we missed it, it must have been quite a spectacle! 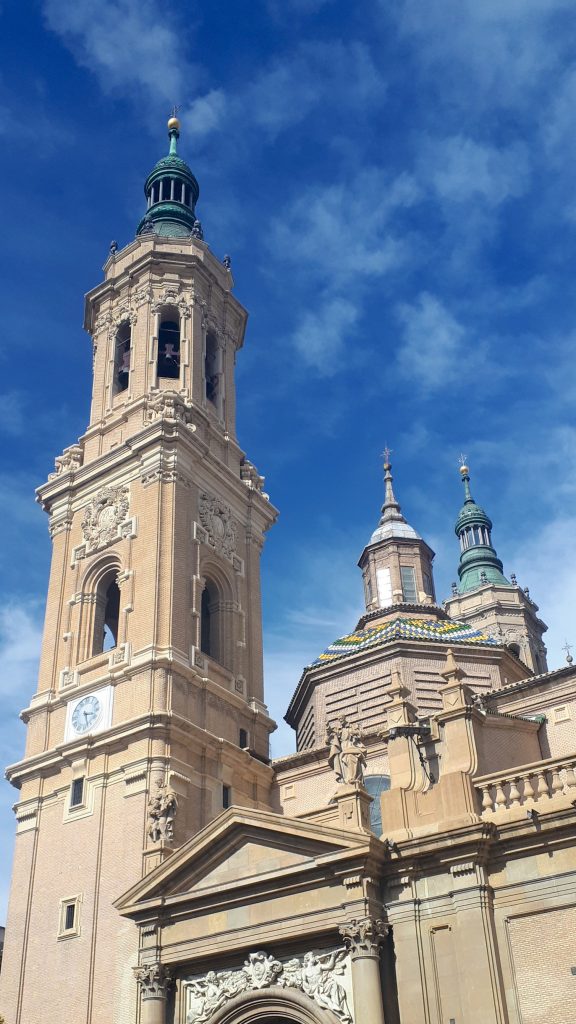 The tower of the Basilica

Nearby we found overnight parking in Cella, my namesake town, how could we not?  It was just a huge car park and not very glamorous but it was quiet, free, with services and did the job.  Next we headed to Pamplona further North.  We’ve wanted to go here for ages since it was recommended by friends and finally we made it. 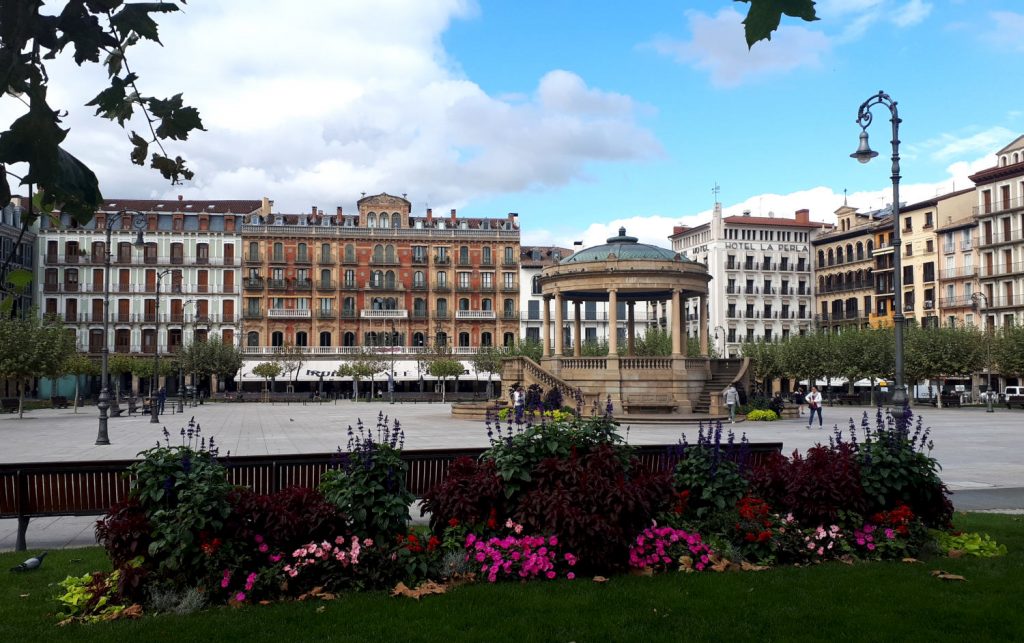 Pamplona is famous for its San Fermín ‘running with the bulls’ event but it’s so much more than that.  We don’t agree with bull fighting but it’s a huge part of Spanish history and culture so although we would avoid it it doesn’t stop us visiting anywhere. If that was the case we could barely tour Spain at all as bullrings are dotted all over the place.   Pamplona’s bullring holds an incredible 19,720 people! 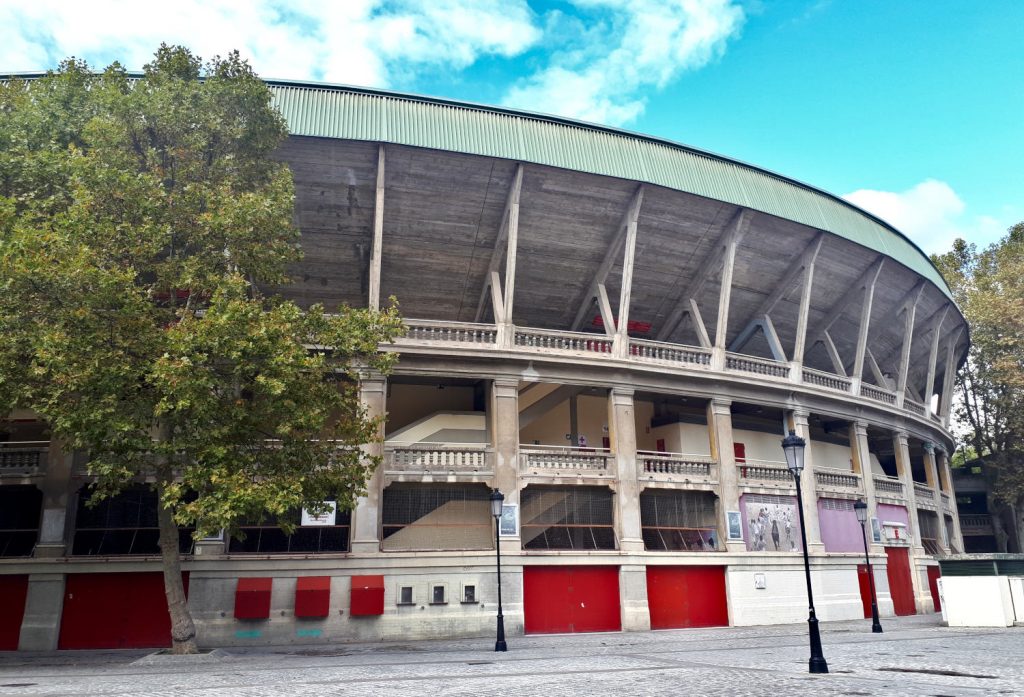 As we  walked around we got a great feel for this city.  It’s  not too big, there’s plenty to see and explore, the streets and architecture are interesting, there are extensive old city walls, pleasant green space and it’s easy to get around.  You can’t ask for more really. 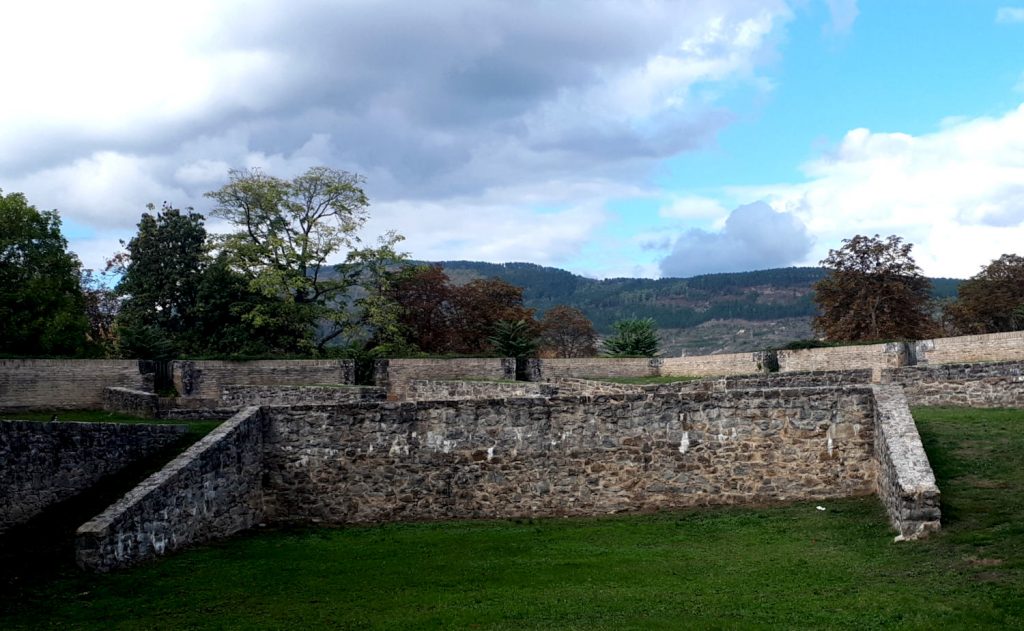 Pamplona city walls with views beyond.

Cafe Iruna in the Plaza del Castillo was often frequented by Ernest Hemingway whose first novel ‘The Sun Also Rises’ was set here, in the roaring 20s. The tourist office tells everyone to go there and ask for his corner, of which there are probably about 8! 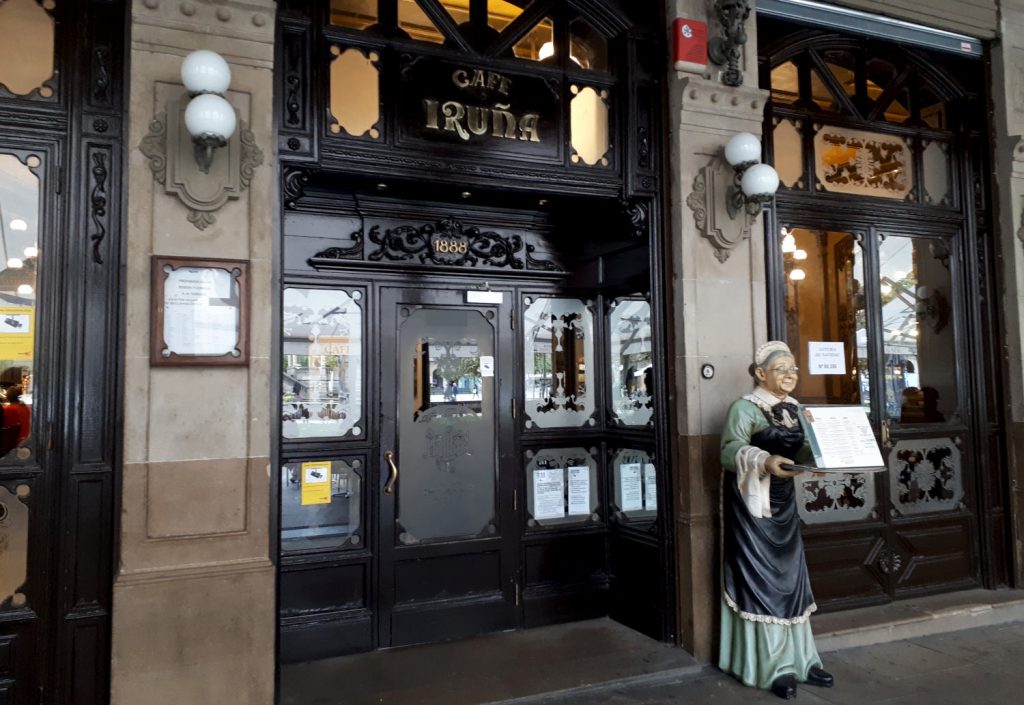 Cafe Iruna has been in Pamplona since 1888!

We drove out of the city for the night, to somewhere a bit quieter – a motorhome aire overlooking some allotments where we watched the sun go down and the gardeners picking the last of their pumkins. Touring means that virtually every morning and every night we’re treated to a different view and a different skyscape. It’s not always in a beautiful setting and on this occasion, just outside Pamplona, it’s essentially just a road but we enjoy it all the same. The sun coming up and the sun going down are some of the best sights you can see wherever you are. 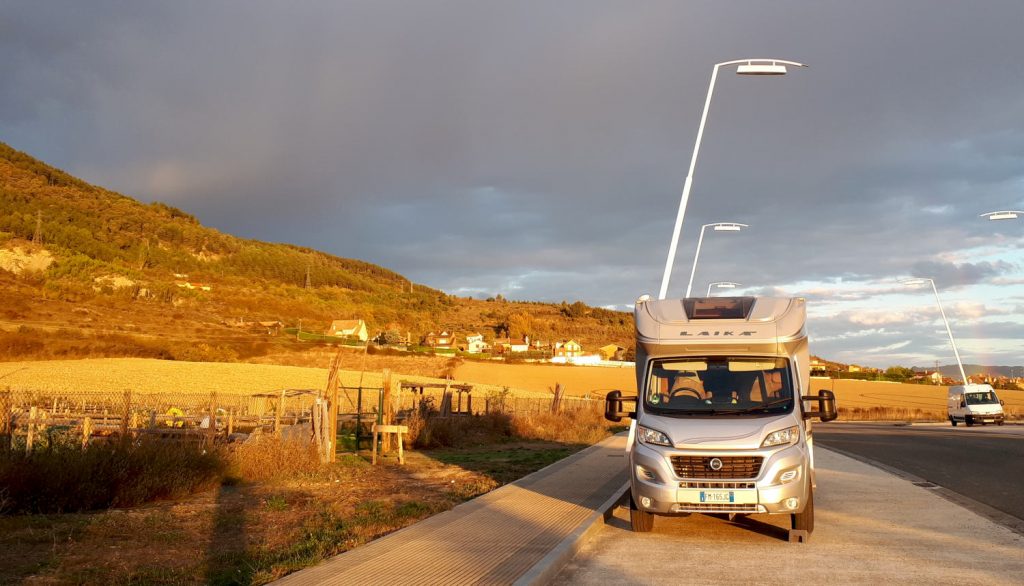 Our motorhome parking for the night just outside Pamplona