Ever since we watched the Timothy West & Prunella Scales trip down the Rio Douro (River of Gold) we have had Porto and the Douro Valley both UNESCO World Heritage sites in our sights, so were really looking forward to this part of our trip. What’s more finding parking free along the river front on the Cais Capelo Ivens was a real bonus, a pleasant 10 min walk from the Largo da Cruz the start of the port area of Vila Nova de Gaia on the south bank of the Rio Douro. The parking was a large area flat though basic but perfect for our needs. 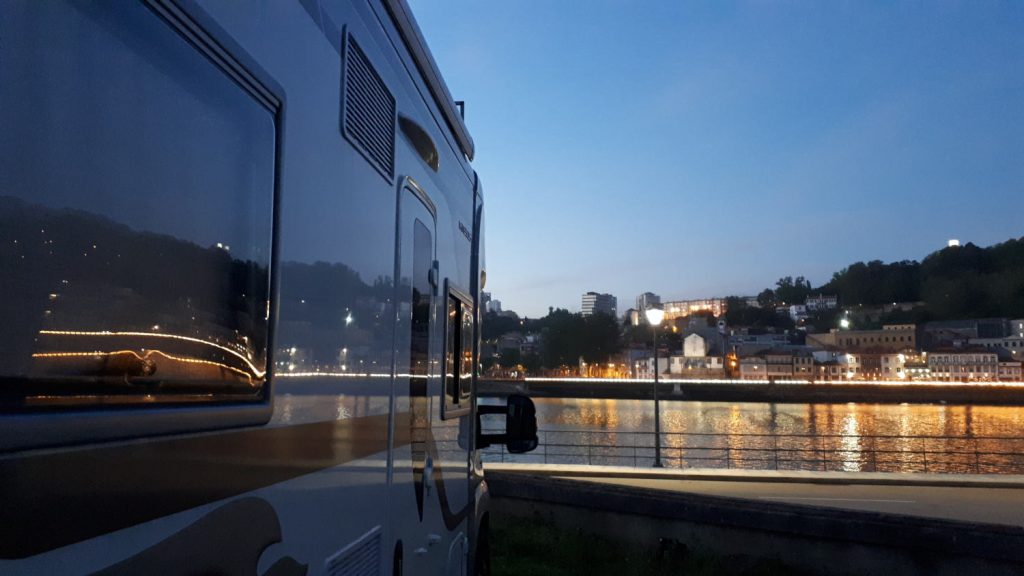 We managed to get Buzz parked facing the road and river with views of Porto. Being late we settled down and had dinner looking forward to the start of our visit to the Porto area and of course tasting some port. Next morning after a quick breakfast we set off into the chill remains of a cool sea mist drifting up the Douro, heading for the Port caves and Cellars of Vila Nova de Gaia on the opposite bank to Porto itself. Quick bit about Port here, Port or Porto Wine isn’t actually from Port but Gaia across the river and is unique in that Port is aged and bottled in Gaia not at the Quintas/wineries up in the Douro Valley where the grapes are grown and processed. Only the fermentation, addition of alcohol and initial ageing of the wine is done there it is then transported to Gaia where it is aged becoming the Port so loved around the world. 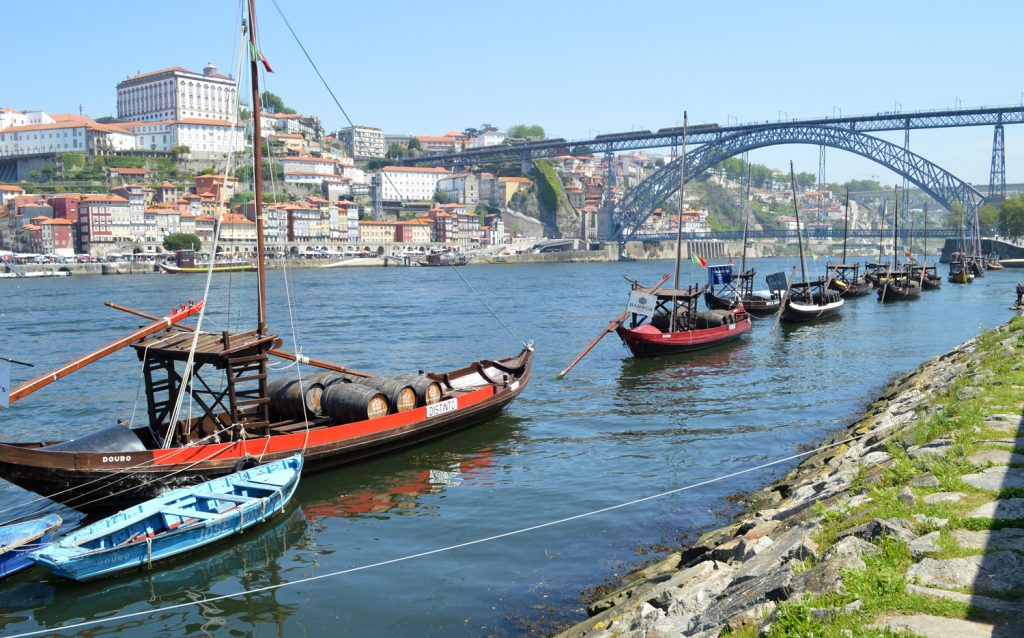 Our aim however was to have a walk around do a little bit of research and then have some wine tours and tastings. Walking along the riverfront in Gaia you are immediately struck by the history of the place, as you wander by the famous Port houses – Grahams, Taylors, Sandeman, Croft, Ferreira and if you really know Port many more, it also becomes apparent just how much influence the British have had on this area. In fact there is only one truly Portuguese Port producer, Ramos Pinto the rest being largely British or German owned. Grabbing as much information as we could on the tours etc we sat and over a cup of coffee decided on nothing!!

Too much information! They all offer pretty much the same experience and at roughly the same price, so we decided we would choose by how we felt about the place in question. As it was we chose Burmester a smaller but very quaint looking cellar and upon enquiring we were met with an enthusiastic response so we booked an English language tasting for early afternoon. We went for the enhanced tasting which included 3 ports one of which was a 10 year aged Tawny with accompanying chocolates. With a couple of hours to spare lunch followed by a walk across the lower deck of the Ponte Luis, a lovely double deck cast iron bridge a UNESCO World Heritage site since 1996 and the best crossing point over to Porto. Because we were saving Porto for the next day we had a short walk along the riverside Ribeira the revitalised old warehouse area of Porto, full of places to eat and drink, buskers and lots of people. Before crossing back with the sun shining we settled down overlooking the river for a cool beer before making our way back to Burmester for our tour. 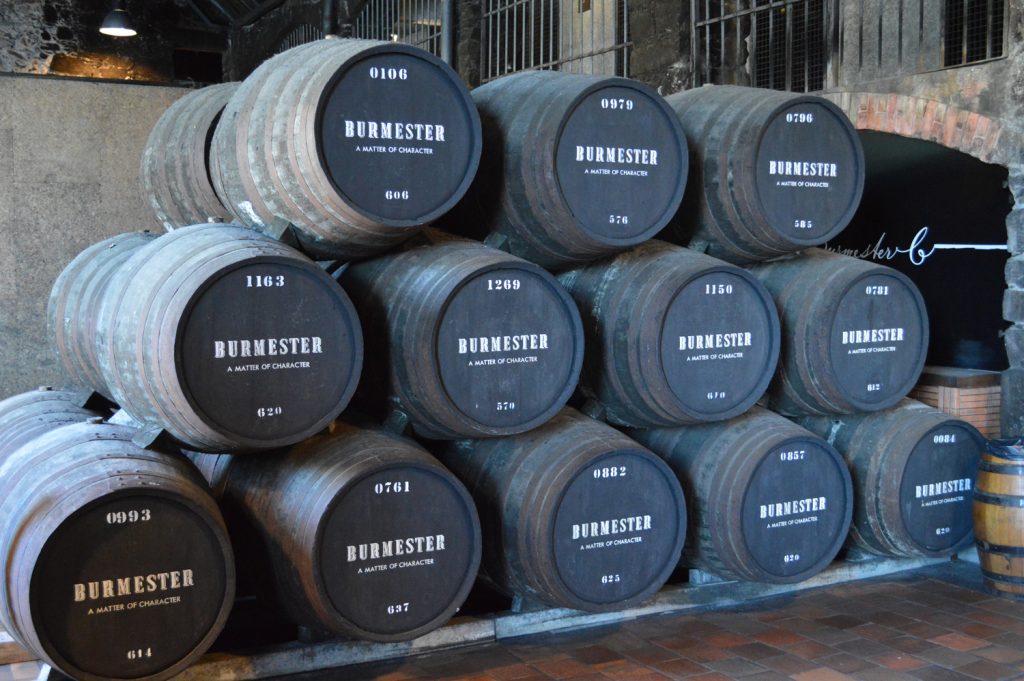 There were about 14 of us on the tour that was fairly short as the cellars aren’t extensive but more importantly was very informative and interesting. It turns out Burmester are part of a group (as many are) including Calem and Kopke and all German. The important part however, the tasting saw us sitting with an American couple on a 10 day tour of Portugal, he being a retired US Navy veteran and the lady being his Mother in Law. We tasted 3 ports a white, ruby and the 10yr tawny plus our chocolates. Each of the wines was fully explained to us and we thoroughly enjoyed all 3 the best for me being the tawny, Marcella preferred the ruby but only just. For me not having drunk port since leaving the Army many decades ago it was the re-awakening of a long lost friendship and a new friendship for Marcella, one we will maintain in the future. After the tasting we decided to hold off on buying any port as the small shops in Porto often sell it much cheaper than those in Gaia, we would therefore wait until in Porto the next day. 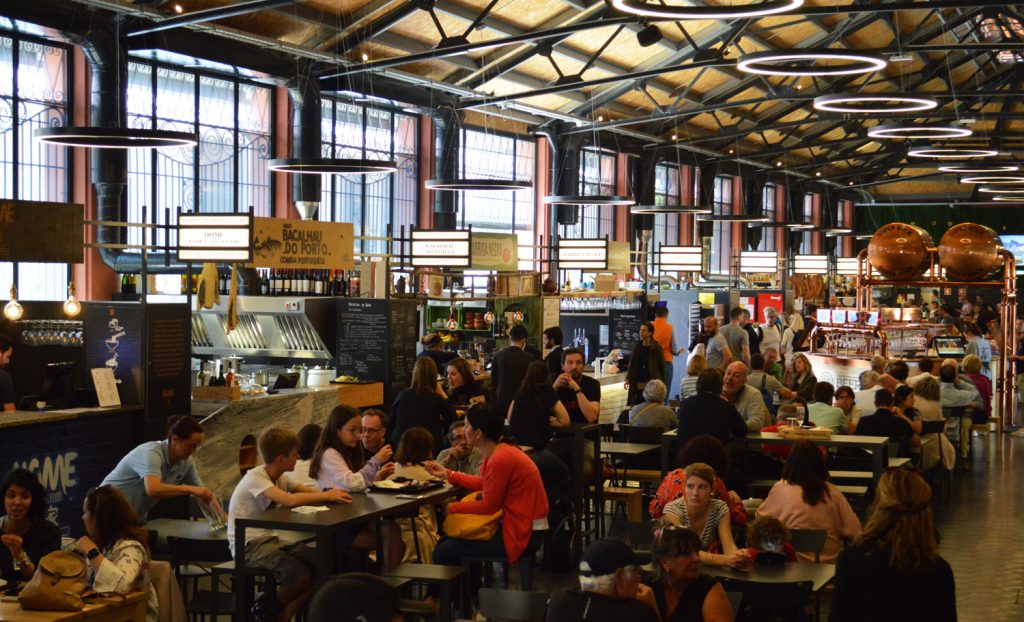 With time going on we carried on exploring Gaia finding the Mercado Municipal da Beira Rio, which we had missed on our first walk through. This is a nice small market with a handful of stalls but plenty of food bars all selling traditional foods as well as a beer bar in the centre. A quick walk around convinced us we would come back for something to eat later. In the meantime we decided to climb the hill to the Jardim Do Morro and the top deck of the Ponte Luis, it is quite a walk up there but having spotted a small multi-storey car park stretching up the side of the hill we decided to take a chance that it has a lift and we can exit at the top. Finding the lift we were just about to press the button when a young lad jumped in, heading to the top we found our way out and onto the road with just a short climb to the park. Sitting at the entrance to the bridge top deck which carries the metro across, there are large concrete benches on a slope so you can sit and look out over Gaia and Porto below. On the other side of the track sits the Mosteiro da Serra do Pilar another UNESCO site. Though much to our detriment we didn’t go in there, it really is worth a visit but knowing tomorrow was about buildings and architecture we decided today was about views and port! 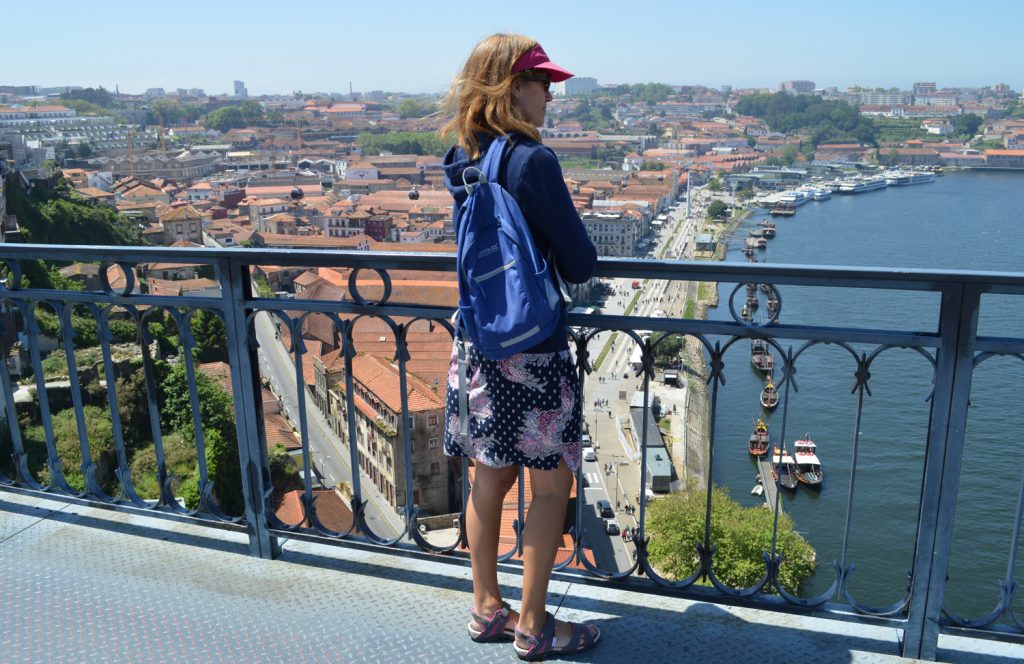 A quick walk onto the bridge followed but it was getting cool with a cold breeze blowing through and hunger was calling, so it was back to the Mercado for us and something to eat. Making our way back to the car park for our lift down the same young lad suddenly appeared getting the lift back down with us and we went straight to the market from there. In the market we found a seat sharing one of the benches that run up the centre before going off to order our dinner choosing a local speciality a real competitor to the full English when it comes to clogging your veins the Francesinha (“little French Thing”) this is the proverbial heart attack on a plate. Firstly it is called a sandwich in that it sits between toasted bread however it is a stretch doing so, the contents are as follows – Toasted bread as noted, a chunk of steak, smoked sausage, ham, un-smoked sausage then covered in slices of cheese the whole thing is then placed under a grill to melt the cheese it is then served swimming in a peppery tomato and beer sauce, it looks slightly uninviting (hence no photo!) but was actually delicious. Luckily we chose to share one washed down with a beer followed by a black forest pavlova on a chocolate cake base. Suffice to say we were stuffed and all for less than 15Euro, it was time to go back to Buzz and rest our bellies, a cold walk back as the breeze had turned icy. A contented and relaxed night followed as we looked forward to Porto in the morning. 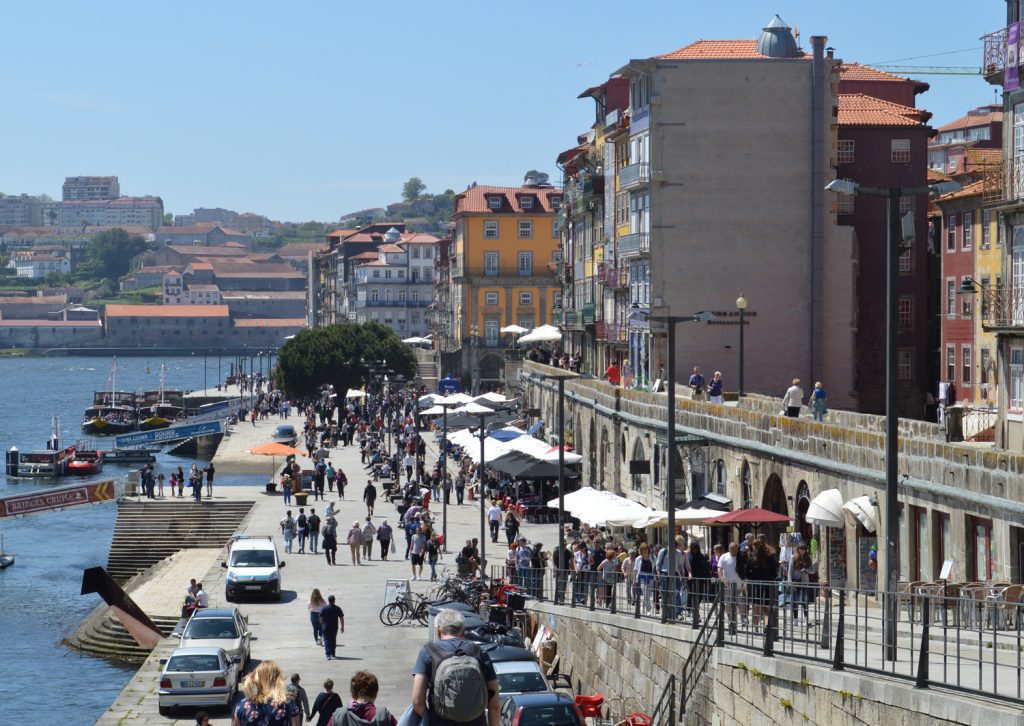 With the morning mist burning off quicker than the day before today promised to be warmer with less wind and so it was. We decided to check out a couple more cellars before crossing the river, going up the car park lift and walking across the top deck and going first to the train station. The station is not particularly big but has the most amazing foyer with 20,000 azulejos (painted tiles) depicting historical transport related themes, it is a stunning piece of work and worth the few minutes it takes to see and admire. 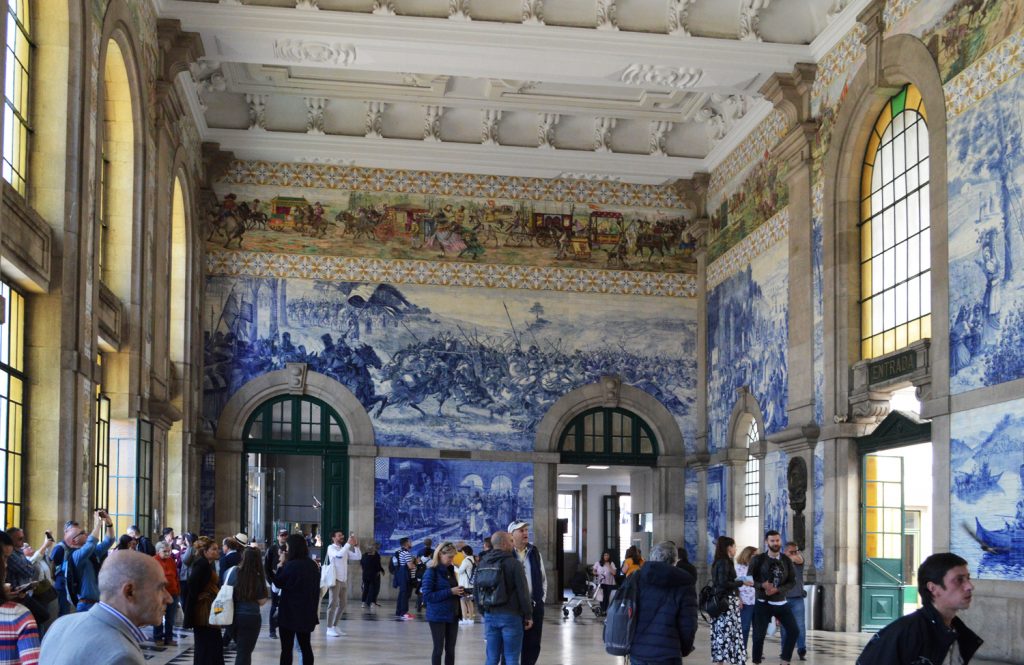 From there we made our way to the Mercado do Bolhao or rather we didn’t, we couldn’t find it anywhere and while standing there looking utterly perplexed a local man stopped asking if we were looking for the Mercado. Our positive reply brought a period of stilted communication while he explained to us that it was closed pointing to the big blue signs hanging on the temporary fencing around scaffolding. Yes we had been walking around it!  He then pointed out the location of the temporary market in the opposite direction to the signs. It turns out he had been around putting up little signs to that effect, as we thanked him parting company he had a pleased look on his face to match ours. The temporary market unfortunately wasn’t what we had hoped as it was in the basement of a local shopping centre and we had really wanted to see the building rather than the produce, in this instance at least. 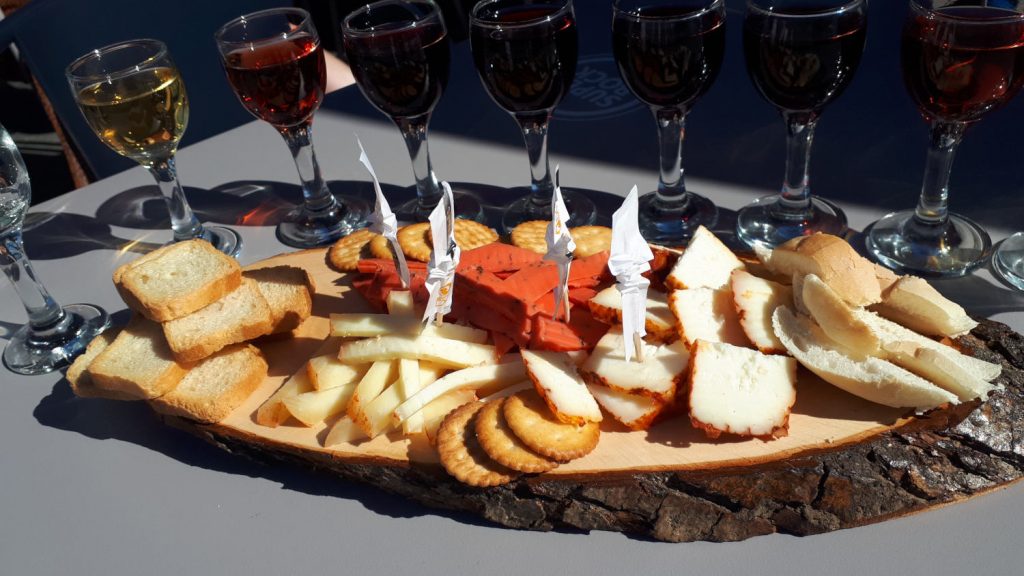 Porto – 5 Port tasting and cheese board

After the market we spent quite some time wandering around Porto with so much to see, with beautiful buildings and parks to see we can thoroughly recommend it. A simple lunch followed by a search for a shop selling local produce where we bought some bottles of port at half the price across the river in Gaia, so if you are looking for port shop around after you have tasted it. Crossing back to Gaia it was still warm and sunny so we made for the little bars that line the Mercado selling port at 5 different ports for 5 euro, sitting in the warm early evening sun with our port and a cheese board we reflected on a lovely couple of days and the prospect of the Douro River Valley to come.