Romance and fun in Bavaria

Romance and fun in Bavaria

Moving on we had made the decision to drive the Romantic Route (Romantische Strasse) a 410 km route down through parts of Bavaria, following a delightful route through some of Germany’s prettiest villages.  It starts at Wurzburg ending at Fussen next to the fairytale castle of Neuschwantstein, our ultimate destination. 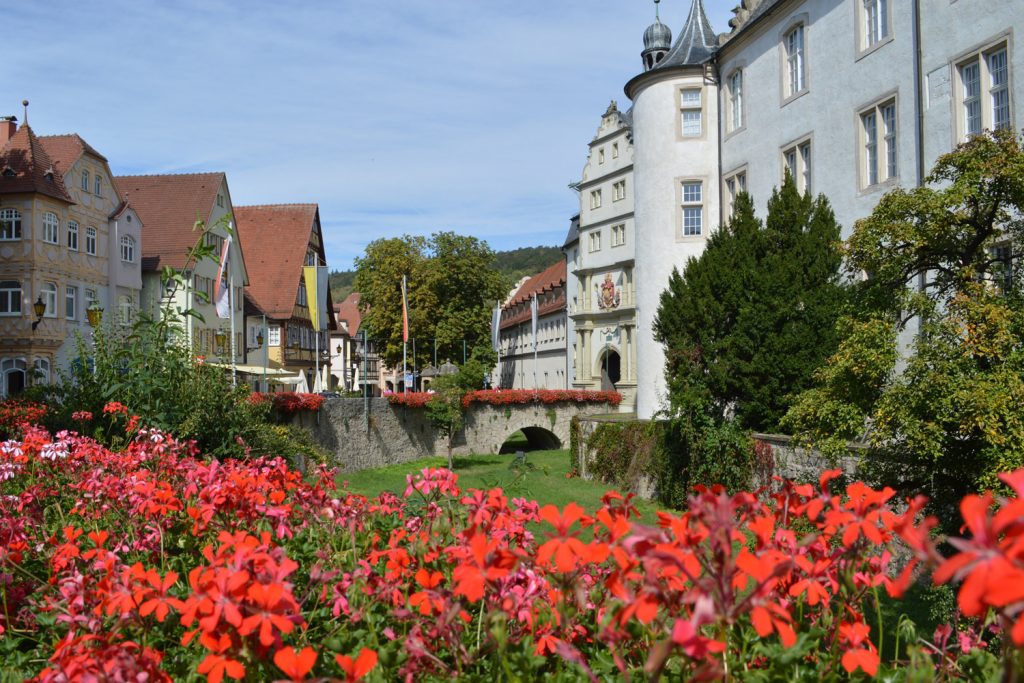 Joining it at Bad Mergentheim south of the start at Wurzburg, we turned down the Romantic route. The reality is there are so many places to see and things to do we are only going to give you our top towns the must see places, otherwise we would be here for ages. Taking a short stop at Bad Mergentheim to look around the town, we parked at the Stellplatz on the edge of town a 15 minute walk from the centre. A couple of hours was all we needed to enjoy the sights and scenes of this lovely little town but Bad Mergentheim is more about it’s health giving waters and Spa and we didn’t feel the need to avail ourselves on this occasion especially as we were keen to get to Rothenburg. 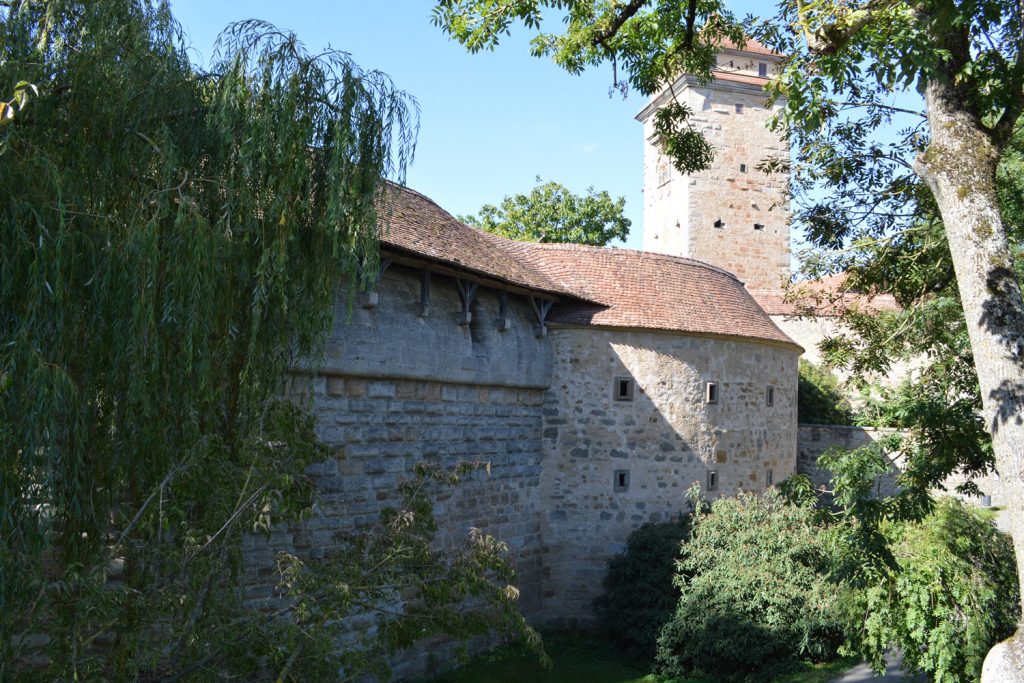 Part of the Spital Bastion in the Rothernburg wall

Next up was Rothenburg O.D.T (Ob Der Tauber) now if you love Christmas (and who doesn’t?) then you will love Rothenburg. It has one of the best preserved town walls in Germany with many gates and towers intact, you can freely walk on large sections of wall. However great the wall is it is nothing compared to the gorgeous town that lies within them, laid out largely in a cross, it is full of stunning old buildings, lovely restaurants, bars and shops. Around every corner and along every cobbled old street, the architecture is like a scene from a postcard.  For those Christmas fans it is Christmas 365 days of the year in many of them selling beautifully crafted wooden toys, cuckoo clocks, bears and the most amazing Christmas tree decorations. 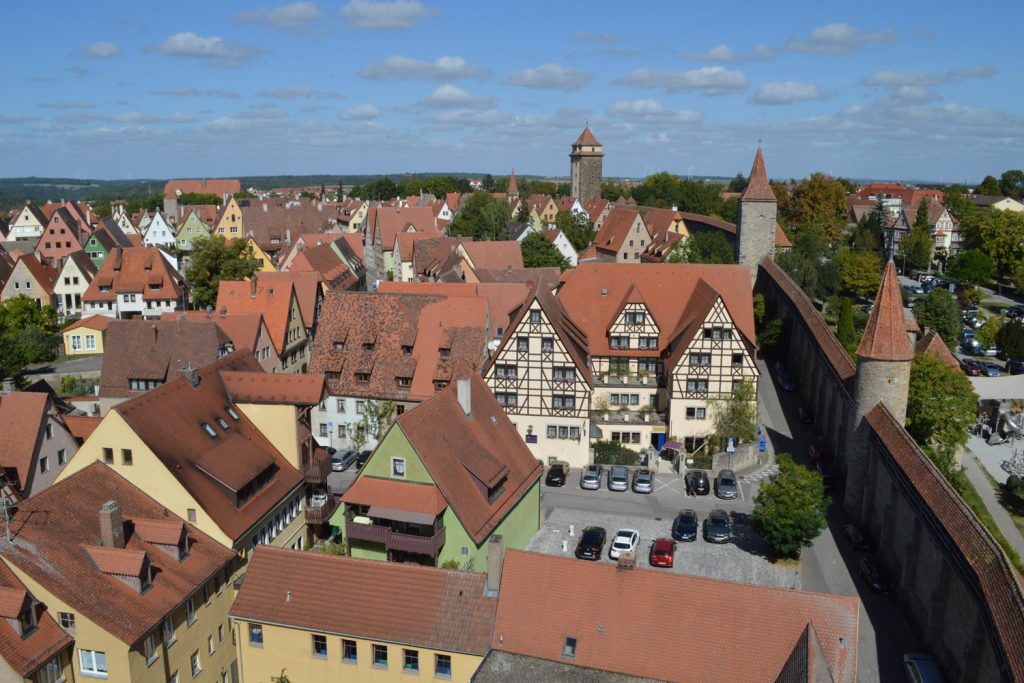 View from the top of the Roder Gate tower

Also worth a look is the Roder Gate, this 14th century gate and tower are the best preserved of the older town and the tower is open to visit. Which means fabulous panoramic views of the town from its top floor for the princely sum of 2euro, and the delight of a long set of steps to climb of course! This is truly a fairy tale town and for us and other motorhomers there is a big Stellplatz less than 5 minutes from one of the town gates, Buzz was very happy with that. 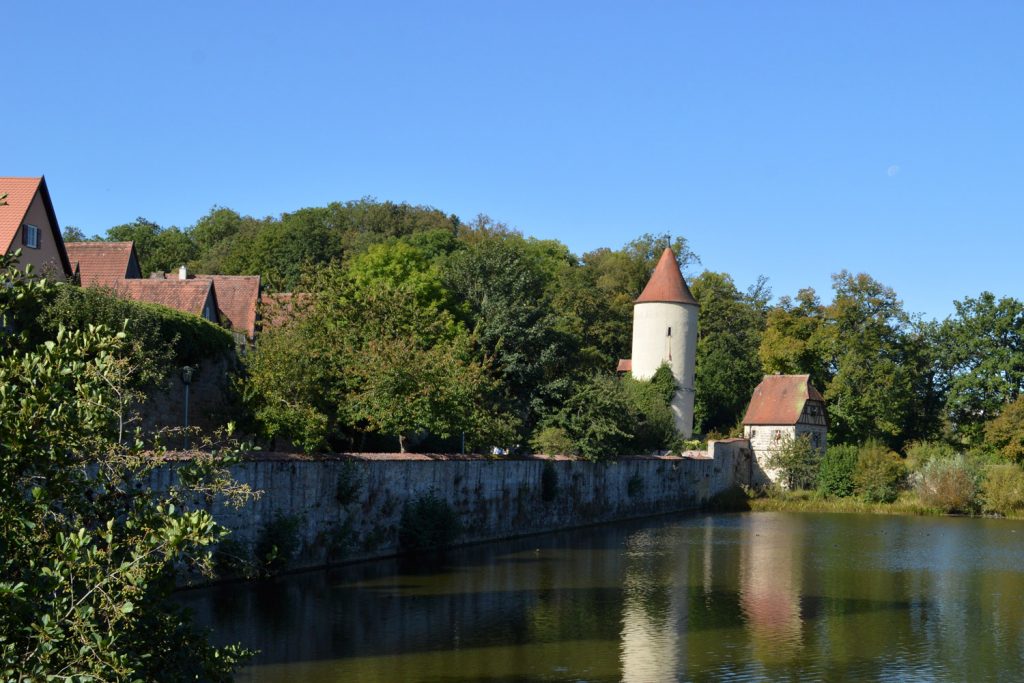 The lake just out side Dinklesbuhl town wall

Our next favourite came just a day later at Dinkelsbuhl less than an hour’s drive away.  We met up with our Instagram pals, The Wicksy Wanderers at at a new and currently under construction Stellplatz they’d told us about. We’d been roughly following them down the Romantic Route and had finally caught up so it was great spending an afternoon and evening chatting and getting to know some fellow travellers better. 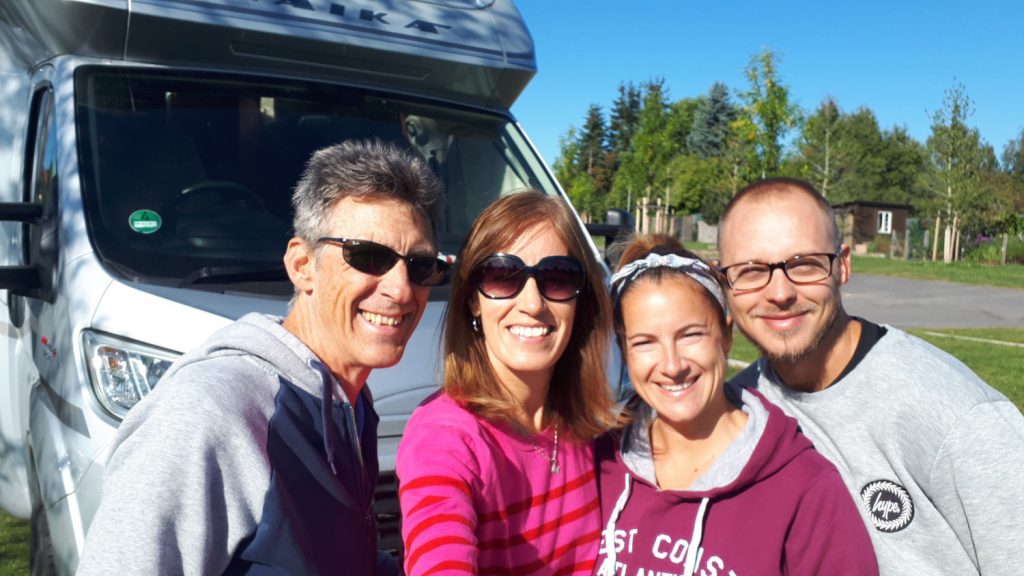 Getting to know Carly and James aka The Wicksy Wanderers

It was only a 5 minute walk from the town which was in some ways similar to Rothenburg except this one was quieter and more subdued but nonetheless just as pretty. It doesn’t have the tourist traffic that pour into Rothenburg and so doesn’t the plethora of gift shops but it does have some lovely cafes and restaurants. full of character and like R.O.D.T an almost complete wall full of lovely features and patrician houses.  If you’re within driving distance then make the time to visit Dinkelsbuhl, you won’t be disappointed.  We were also lucky to see what appeared to be the local celebrities, 4 squat little Sausage dogs out walking. 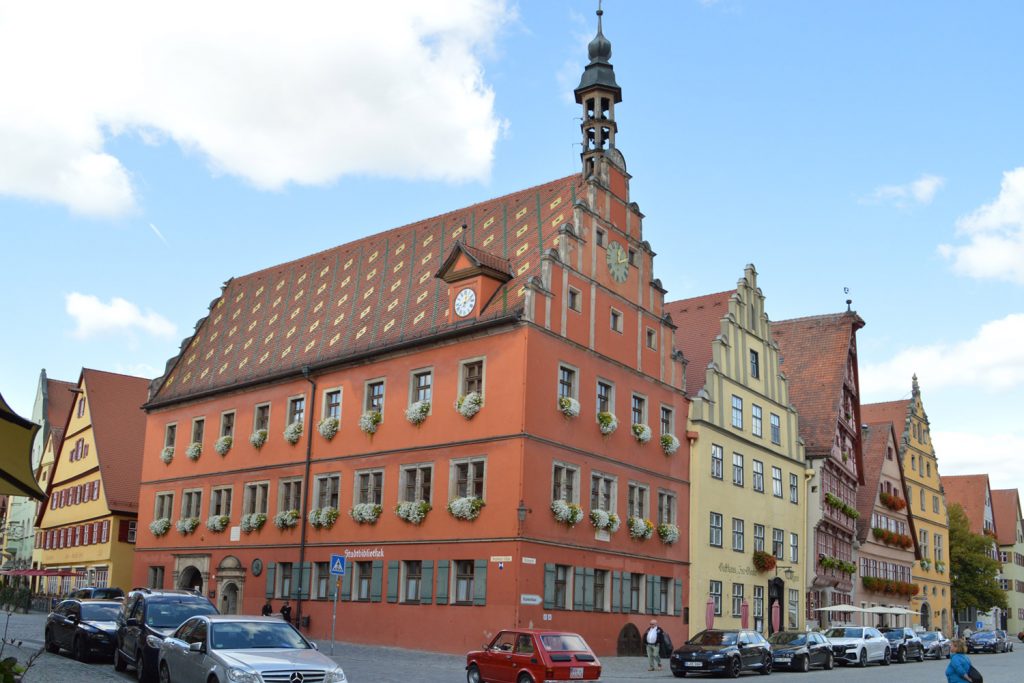 When you are relaxed and enjoying the sights it throws up the conundrum of whether to stay where you are for a few days or move on to the next exciting town. Suffice to say as we are on a tour and as such moving on usually wins and in this instance another of those interesting towns on the Romantische Strasse beckoned. In this case Nordlingen, a quite unique town in that the old town was built inside a gigantic Meteor crater.  The entire walls are still intact and it’s the only town in Germany where you can walk the whole wall uninterrupted.   The wall contains a near complete medieval town, and the walk is pleasant and interesting with many houses built into and under the wall, however unfortunately (in our view) being so close to both the previous towns it doesn’t quite hit the highs we had seen.   We had great expectations at seeing a town inside a crater but you can never get high enough to appreciate the fact so unless you have a drone or a hot air balloon you will never get that perception.  That doesn’t mean you shouldn’t visit but maybe the best order would be  Nordlingen – Dinkelsbuhl – Rothenburg Ob De Tauber, that way they wil just get better and better as you go along. 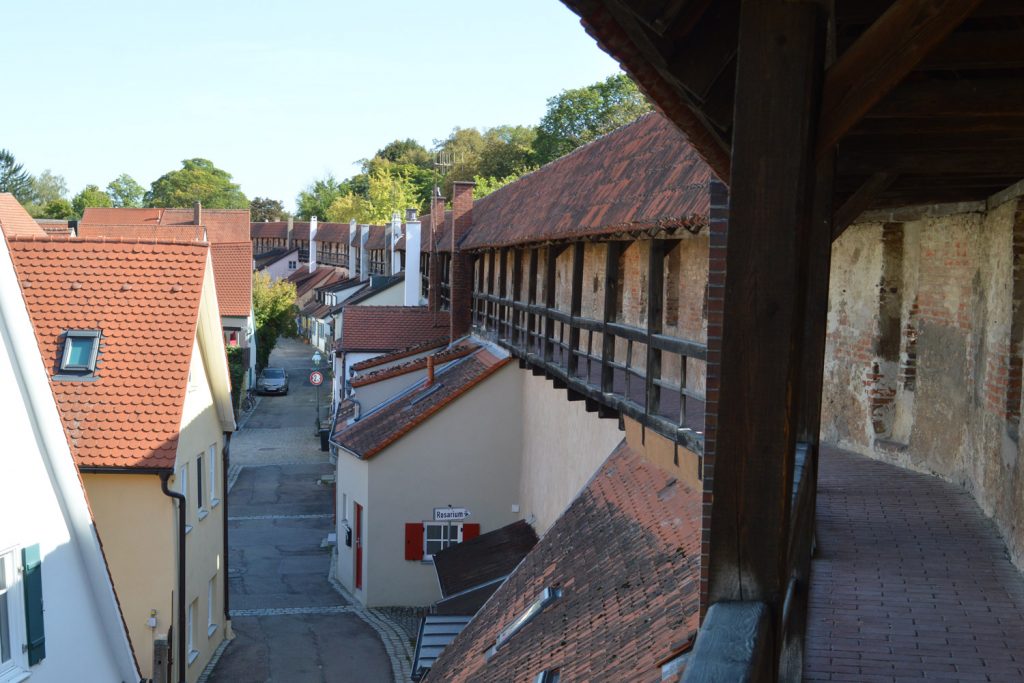 Part of the Nordlingen wall,where you can walk the entire wall.

The last town of this post was all about one thing, the Schloss Harburg, one of Germany’s best preserved castles which had remained in the same family’s hands for over 700 years.  It’s very small pretty town with some interesting houses and church, sitting astride the Wornitz river.  The hill, castle and bridge area are particularly scenic and we had the privilege of spending the night parked just a few yards from the Schloss which was our first port of call.    We get up in the morning slightly earlier than we would have liked as we were rudely awoken by a team of men frantically strimming every single blade of grass around the car park at 7 in the morning!  Visiting the castle is cheap at only 3 euro but you have to pay extra for a guided tour for the inside.  We didn’t bother with the tour but spent some time walking the grounds before heading for the lower town.  It’s small but appealing town with a tranquil river setting and ancient bridge. Look out for the flood height marks on the house half way across. Our return journey via a different path had the added bonus of a series of little fairy tale story scenes set out along the path, presumably made by the local school children. 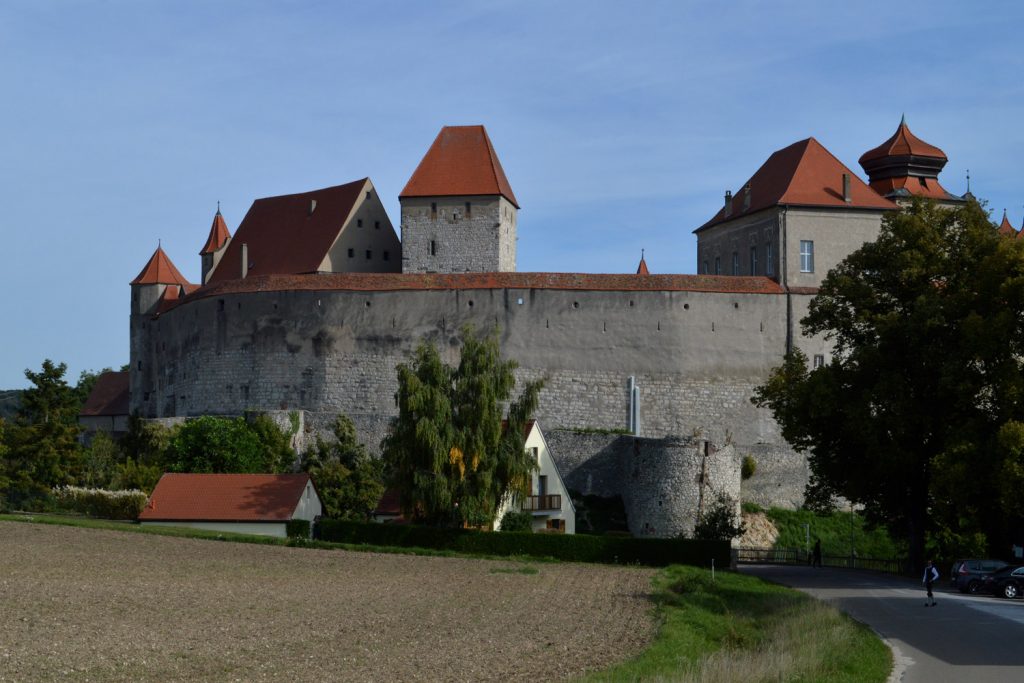 The imposing Schloss at Harburg, our morning view from Buzz

From here it was onto Augsburg but that’s for another post, our experience of the Romantic Route had so far been better than expected and we still had what we felt was the best to come.