San Remo, known as the City of Flowers, was our next destination and after a long drive along the Liguran coast we found a large Aire, heading straight for it arriving after dark and parking up at the end of a long line of motorhomes. Although basic it was very big, flat and right on the beach overlooking the sea and just a 10 minute bike ride from San Remo centre. 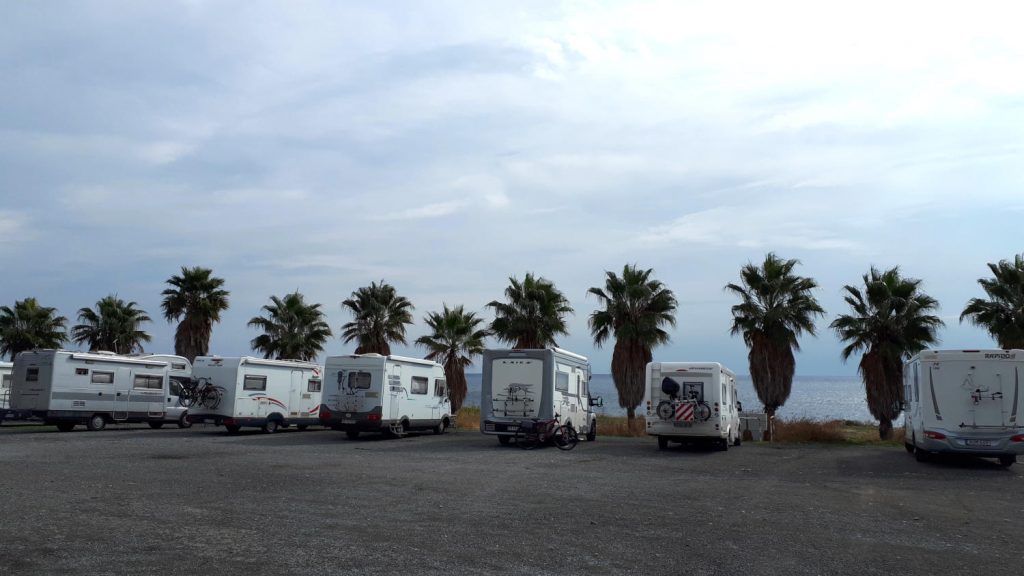 Morning saw us having a leisurely breakfast and unloading the bikes on a bright sunny day with a bit of a breeze and cycling into the centre along an old rail line converted into a footpath and cycle lane, leaving Buzz to enjoy his spot between the palm trees looking out to sea alongside his new buddies. 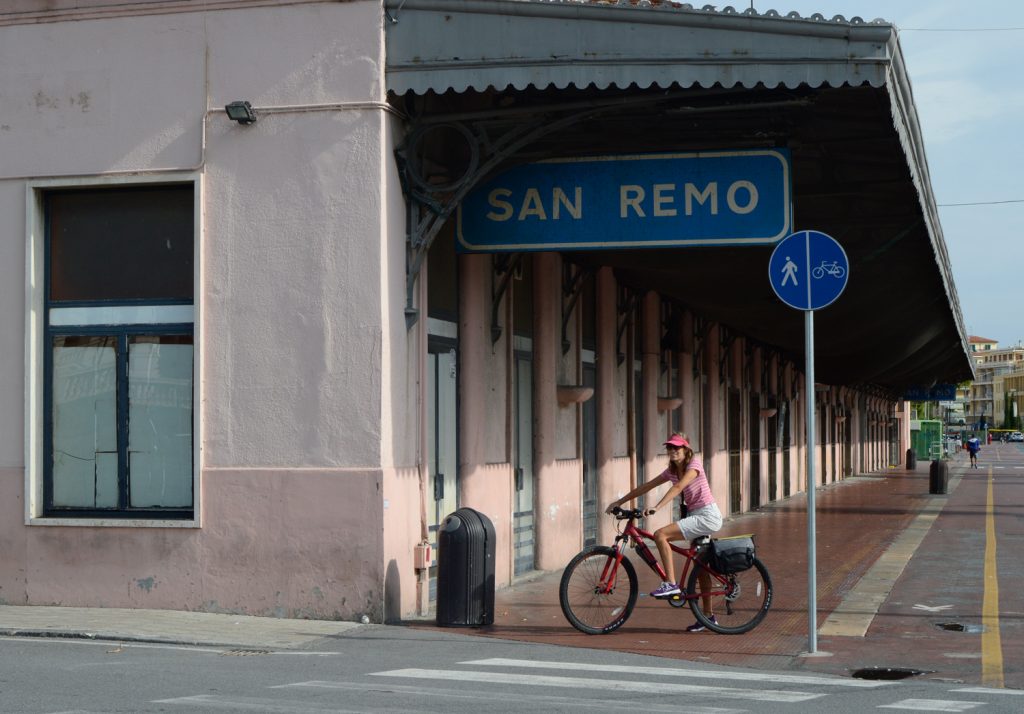 We stopped first at the Fotre di Santa Teclaan 18th century fort used as a prison until recently now used as a cultural centre hosting many events and festivals.  Along the front lawn of the fort sits a fun sculpture/art installation of four huge chairs and music stands, creating a perfect photo opportunity, although neither of us volunteered to clamber up into the chairs making it an even better one.  Just along from the fort we come to the extensive harbour packed with fancy looking yachts, perfectly polished and gleaming, many of which are not quite mega yachts but not far off.  Loving all things to do with the sea we take a slow ride along the line spotting some very interesting boats including an impressive matt black yacht called Neoprene, and choosing our favourites, imagining ourselves sitting and soaking up the sun on the decks. 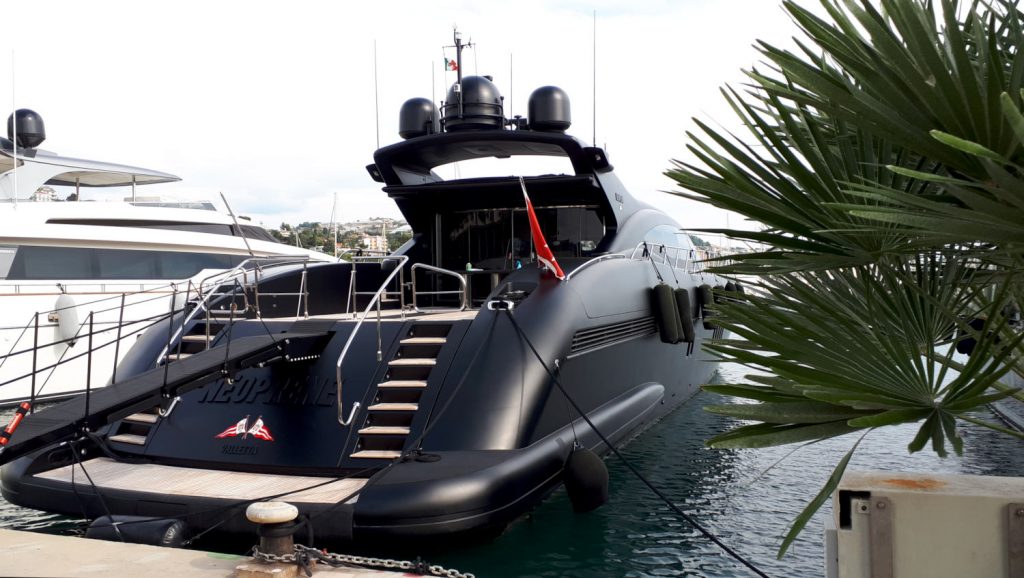 Time is already creeping (after all we don’t have much time to spare) so we stop for a break and our picnic lunch, sitting in a shady park area alongside the harbour where as tradition dictates a local bird turns up and sits watching us with his beady eyes waiting to be fed. In this case it is an enormous great seagull, gradually edging closer, waiting for food but alas we don’t have enough spare to feed it and make a difference – or were we just too hungry and greedy to make a donation?  They are very clever these seagulls and literally the moment we took our last bite, he turned around and slowly walked away, knowing he was not going to be in luck! 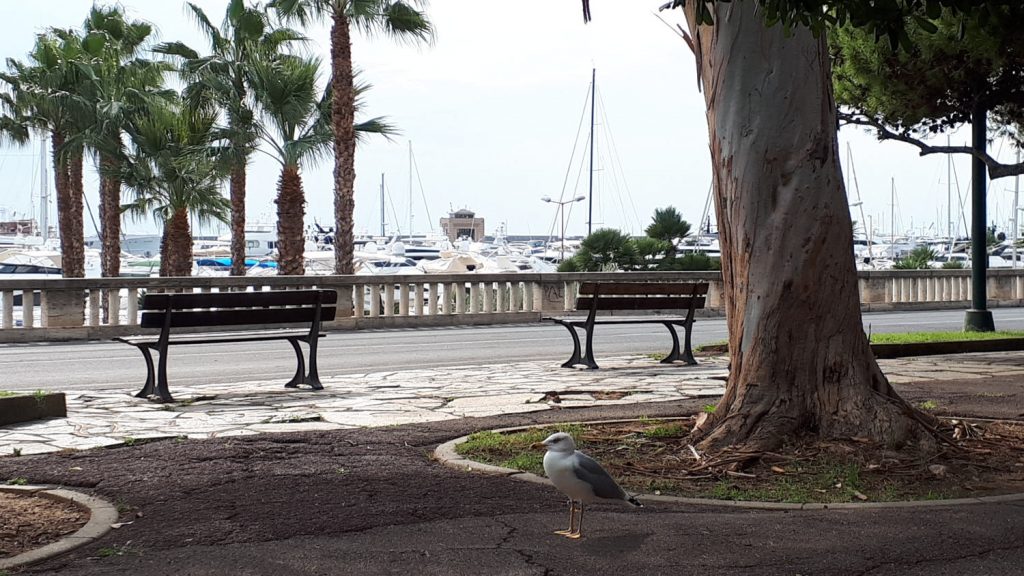 Lunch at San Remo Marina watched by a hungy (aren’t they always?) seagull

Once again we set off heading into the main city centre, cycling up and down streets and across piazzas stopping to admire some of the old buildings and statues. Before long we end up in the main shopping street running from the Piazza Cristoforo Colombo to Via Giuseppe Verdi, which instantly highlights something we have both been seeing and saying. As we ride down this elegant street lined with shops selling designer clothes, jewellery and accessories, the fact is San Remo is a nice city but it wears it’s former elegance like a veil giving glimpses of it’s more glorious past when it was frequented by famous poets, composers and scientists. The pedestrianised shopping street wouldn’t look out of place in parts of Turin or Florence for instance where as here it looks out of place compared to the slightly more dated rest of the city, which is a real shame because we like the city and feel it wouldn’t take much to turn it back into the elegant destination it was. 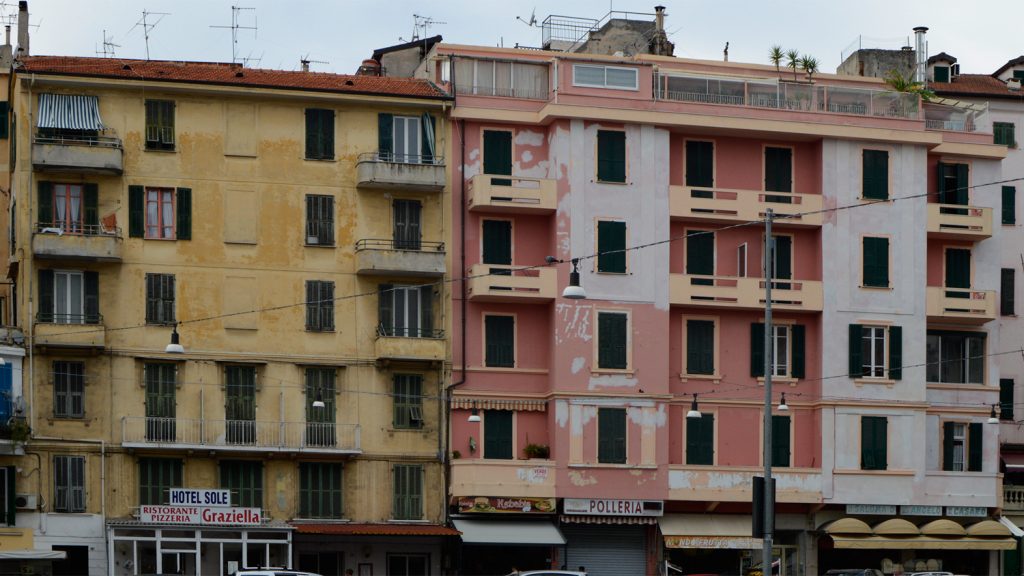 As we carry on we come to the still important possible saviour of the city’s blushes the Municipal Casino standing tall, proud and as popular as ever in the heart of the town in an elegant building in Liberty Deco style.  Established in 1905, the Casino has attracted serious gamblers and spontaneous chancers to the city for years, some winning but mostly probably losing as it the way with these things.   Cycling back to Buzz along the pink, blue and white chequered promenade we pass more signs of San Remo’s potential, two swanky 5 star hotels looking smart, polished and freshly painted in contrast to much of the city. San Remo has plenty to see and do and perhaps because of how it is comes across as more relaxed and laid back. We liked it more for the fact that it was easy going and needing a bit of a wash and brush up, would we go back? Yes we would. We didn’t spend long here and feel sure a re-visit will throw up some hidden gems, next time.