Our motorhome journey continued North and we headed to the province of Teruel and its the city of the same name. At around 915m above sea level in the Aragon mountains of Eastern Spain it lies within picturesque  countryside and has a rich history full of legends and secrets once inhabited by diverse prehistoric and iberian civilizations. Arriving in the late afternoon seems to  have been a bit of a theme for us lately and this is what happened again as we drove up to the motorhome  aire and got settled in. There is a mixed car park with a designated area for motorhomes which was fairly full so its clearly a popular place. The setting sun put on a wonderful display for us again and although the horizon was out of view the orange hues and cloudscapes were quite lovely. 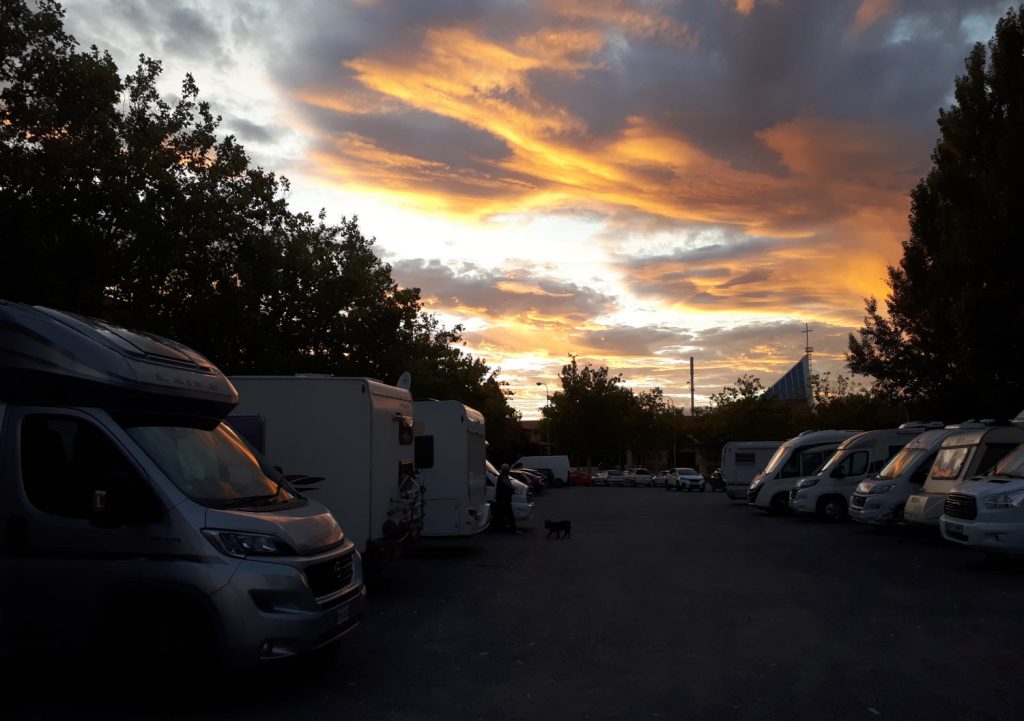 A beautiful evening sky in Teruel

Being right in the town we took the opportunity to have an evening wander through the streets to get our bearings, walking past the eye-catching large archway entrance into the grounds of the Civil Guard. As always in Spain, the town was alive and buzzing. In the cool evenings everyone comes out to play, including small children who were laughing and screeching in a playground not far from the parking area. Fortunately by the time we went to bed, they had too! 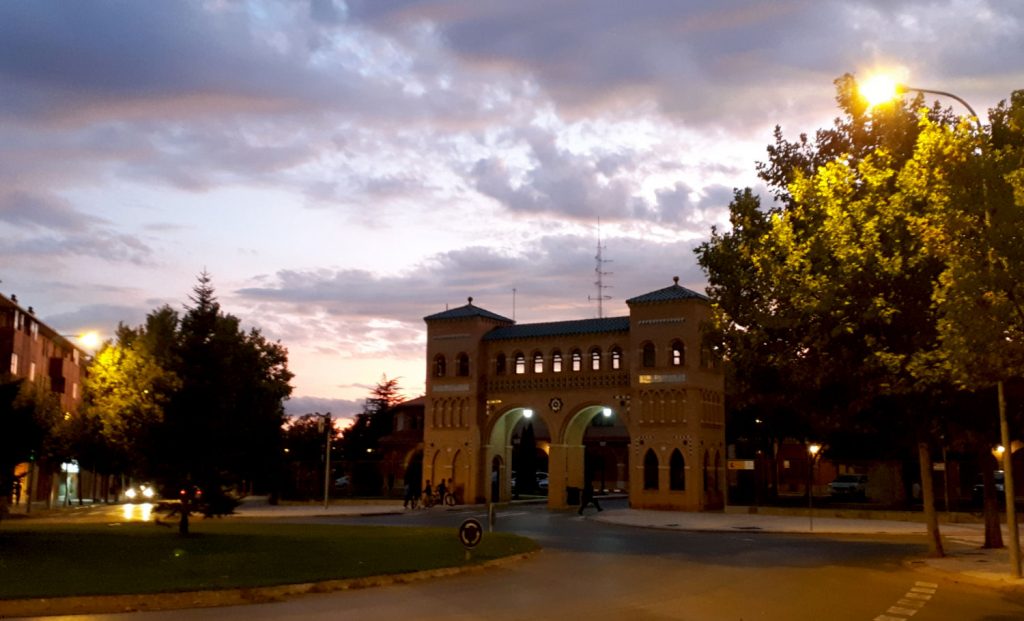 The entrance to the Civil Guard grounds

Teruel city itself is a small, attractive and colourful city and after a short walk over the Viaducto de Fernando Hué which connects the modern town with the medieval we were in the busy centre. Built in 1929 this old viaduct represents one of the most important engineering works of the early 20th century in Spain. At the time of building it was the second largest viaduct in Europe with a central arch 39 meters wide and 34 meters high. 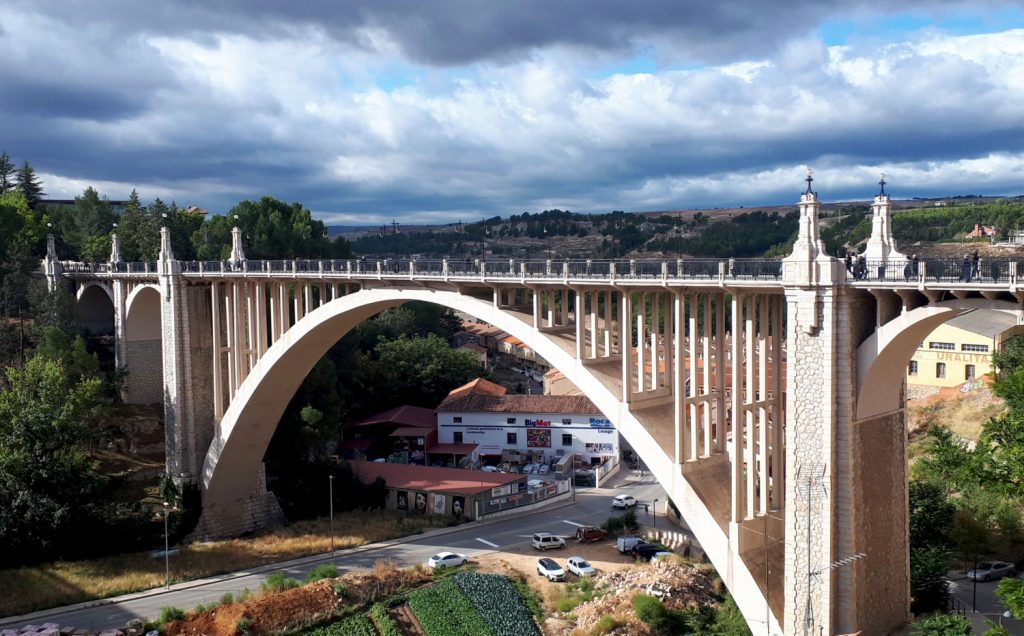 Throughout the town there are a mixture of Islamic and Gothic monuments. Its 12th century Cathedral de Santa María de Mediavilla and tall brickwork towers, San Pedro and Ándito, with their colourful, patterned ceramic tiles make up part of the UNESCO World Heritage site of the Mudejar architecture of Aragon. 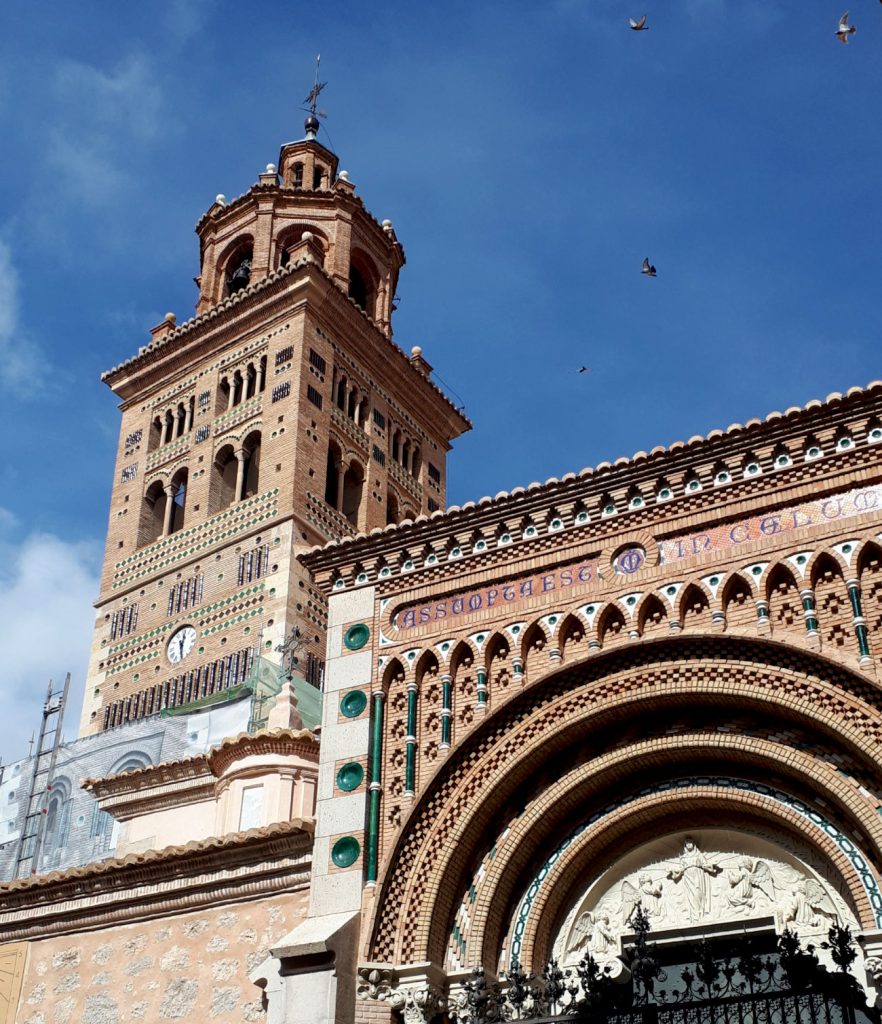 Teruel also has its own celebrated version of Romeo and Juliet, the Teruel Lovers, whose legendary love story dating from 1217 is cause for a city fiesta every year. The tomb with a marble sculpture of the lovers, Diego and Isabel, is on display in the Mausoleum of the Amantes in the town and seems to draw in plenty of Spanish and foreign visitors alike. The triangular town square is lined with tall buildings, colonnaded at the bottom and full of shops, cafes and the perfect excuse to stop for coffee and cake. 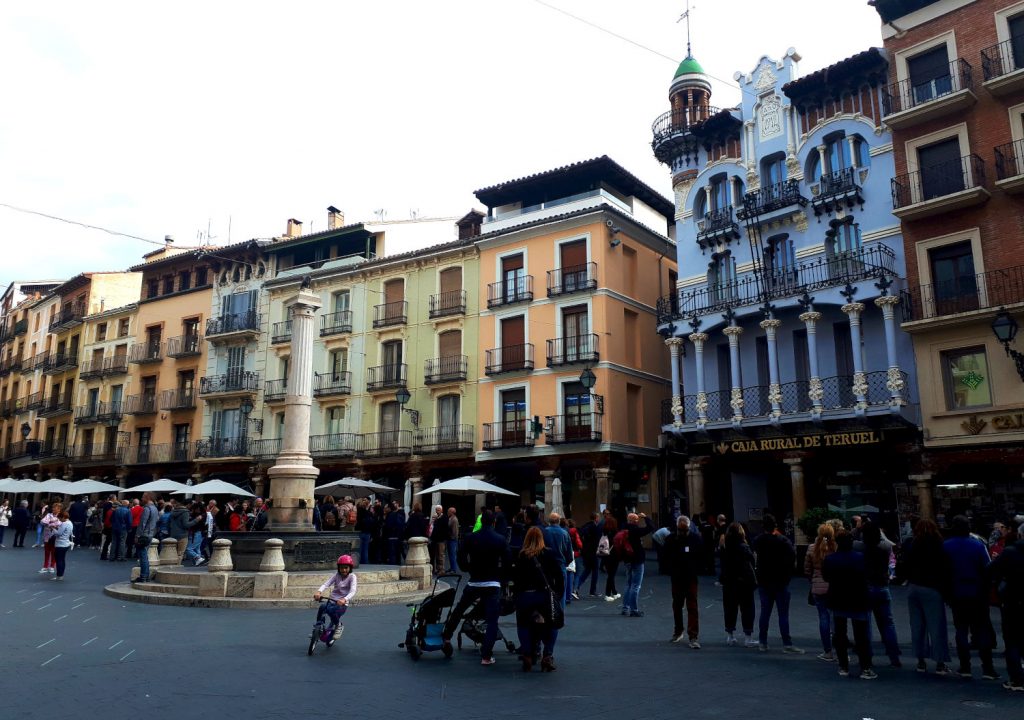 Another must see town in Teruel province is Albarracin and that’s where we went next.  We had high hopes about it and we weren’t disappointed.    There’s plenty of space for motorhome parking in a huge, very convenient car park at the bottom of the town but only between 8am and 11pm, not overnight.  A short walk uphill and we were soon immersed in the warmth and ambience of this stunning town.  There are some places we visit that we instantly warm to. Albarracin, snuggled into its rocky valley, sheltered by limestone cliffs and wrapped in a medieval wall was one of those.

The medieval maze of cosy cobbled streets leads both up and down, this way and that, trailing off up and down steps, around corners and into alleyways and courtyards. The tall buildings in shades of blue, pink, coral and terracotta with wooden beams and iron railings cast cool shadows on the ground, essential here in the raging hot summers no doubt. 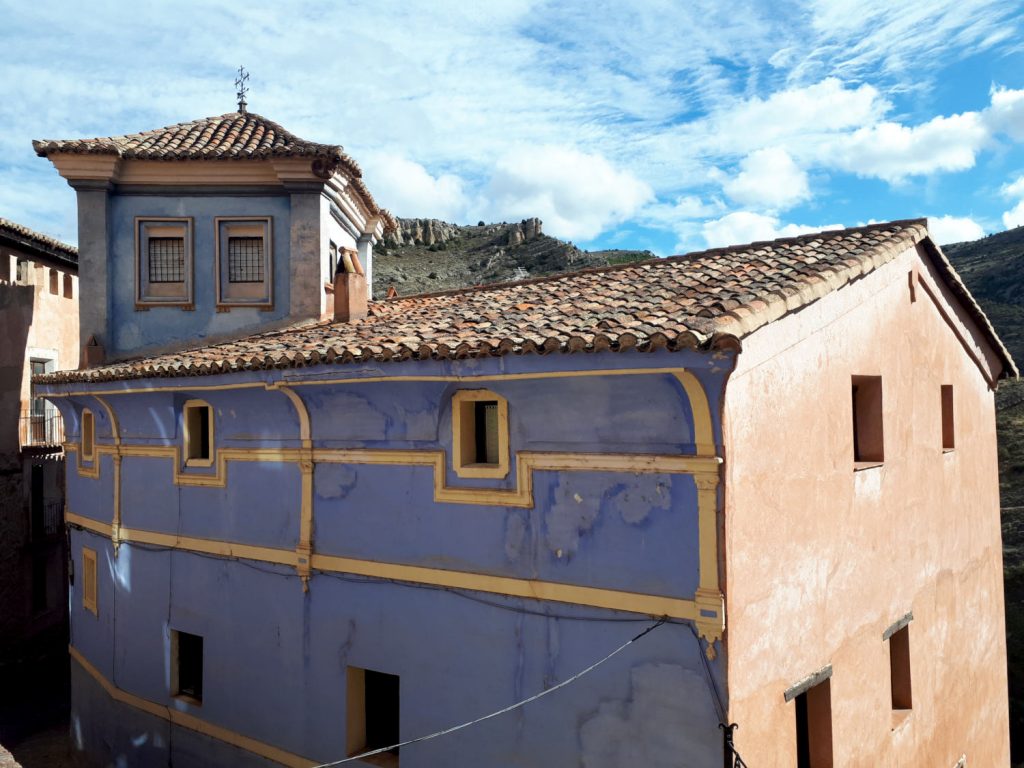 We chose to walk further up first leading to the ruins of the defensive walls which snake around a high ridge, once protecting and encasing the town. You can see the whole town from there and it really is pretty as a picture. 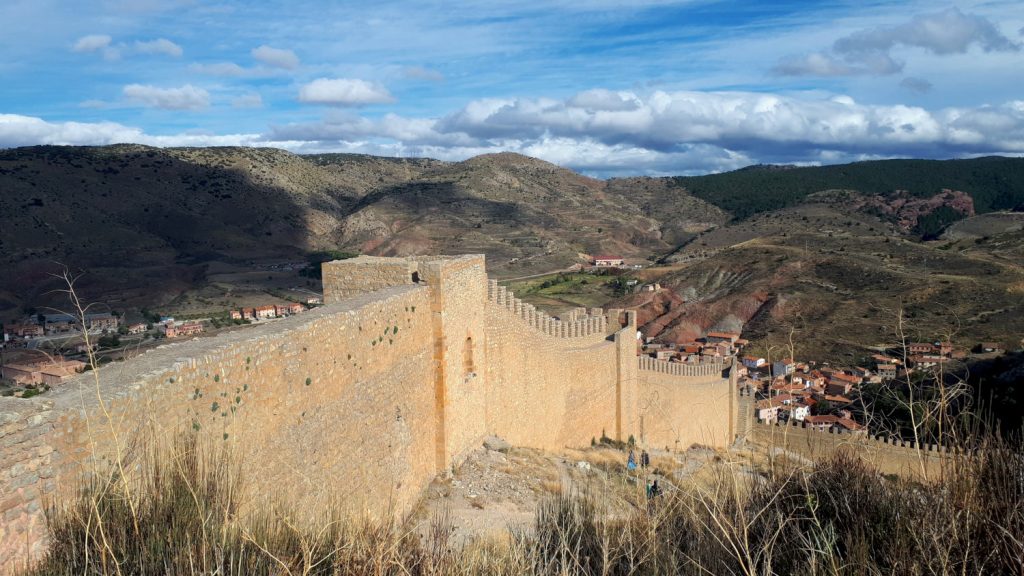 The remains of the defensive walls wrapping around Albarracin

This town has the understandable reputation as being one of Spain’s prettiest towns and is therefore very popular and definitely on the tourist agenda.  However, although there were definitely several tour groups here but we only saw a couple of gift shops and just a handful of places to eat/drink, half of which were closed so it didn’t feel like that. Also it’s October, not peak season, so for us it was just about perfect. 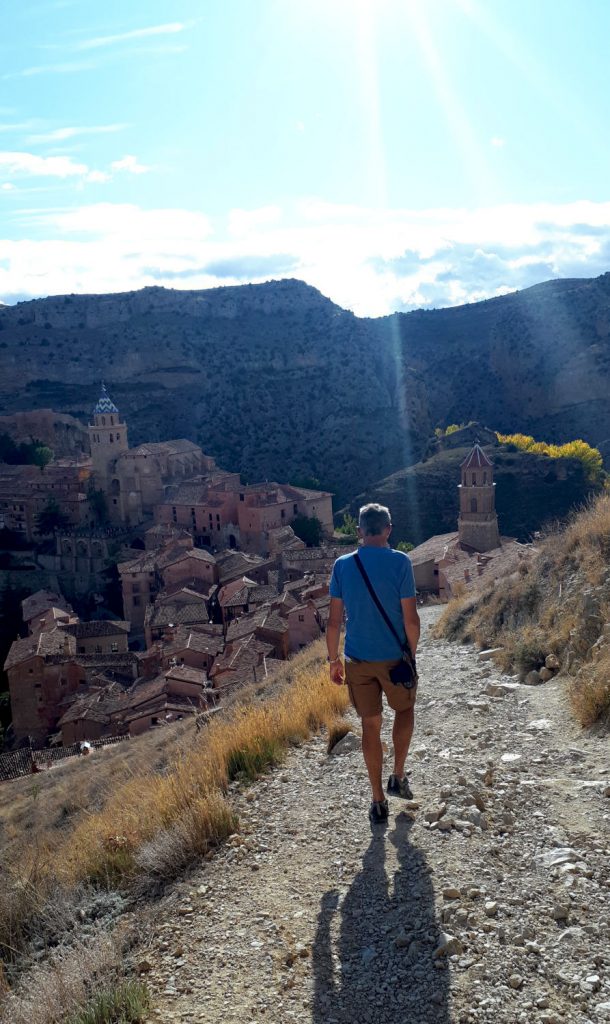 You could stare for hours at that view

If we could have done we would have stayed the night here. Unfortunately there wasn’t anywhere nearby either otherwise we would have come back again the next day for another wander around. The town was slowly falling into shadow as we descended from the walls and it would have been good to see it in the morning with the sun shining directly on it. It’s amazing how different a place can look in a different light.  Reluctantly we went back to Buzz and left but this is a place we’ll never forget and if we’re ever in the vicinity again are sure to come back to.