After a few days at home we started planning a new trip and had decided on North Yorkshire. For once we actually looked up places to stay beforehand, did some research and made a rough plan of what we’d like to do and see.  Suddenly just 2 days before we were due to leave there were torrential downpours with a month’s worth of rain falling in just 3 hours with terrible flooding and destruction caused as a result.  The weather was looking decidedly dodgy too for the next few days so after all that forward thought we had to think again!  Looking at all the weather maps, The New Forest seemed to have a reasonable outlook, so without too much dithering we made our minds up to go there instead and set off for the town of Lyndhurst as our first stop.  The day we left was our 12th wedding anniversary so we’d found a nice pub stopover, phoned ahead to book a table and check that motorhome parking was allowed and set off. 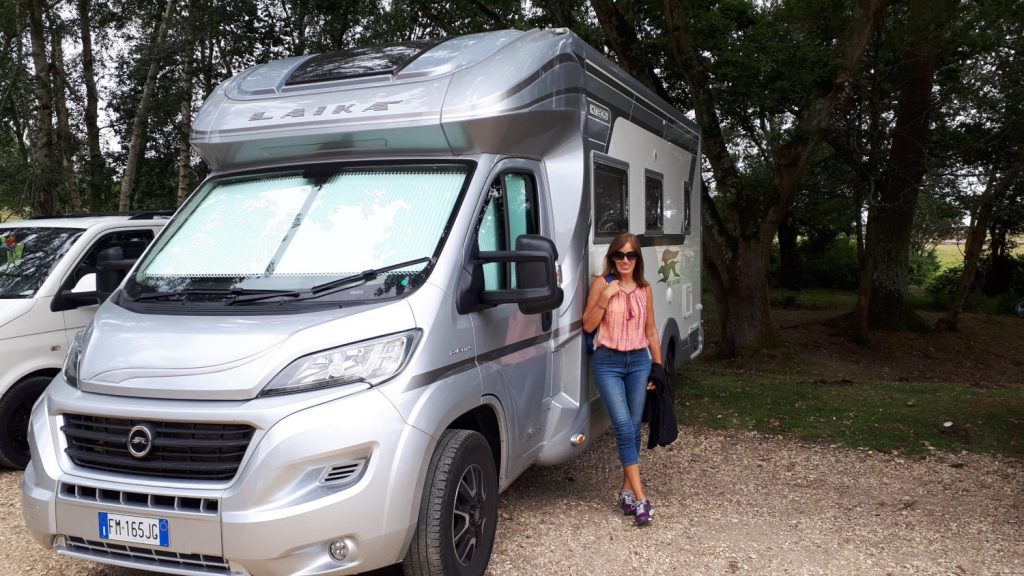 The traffic on the way was absolutely horrendous. It seemed like the whole of England was on the road going the same place as us!  We stopped at a motorway service station for a break and some respite and that was heaving too with barely a place to park even for a car, let alone a 7m motorhome.  We did find a place eventually though and stopped for a few minutes to have a drink and rest from the road.  When we arrived at Lyndhurst it was too early to go straight to the pub so we found a forest car park overlooking the heathland and were immediately greeted by an inquisitive little furry foal who seemed to be wandering about on his own. 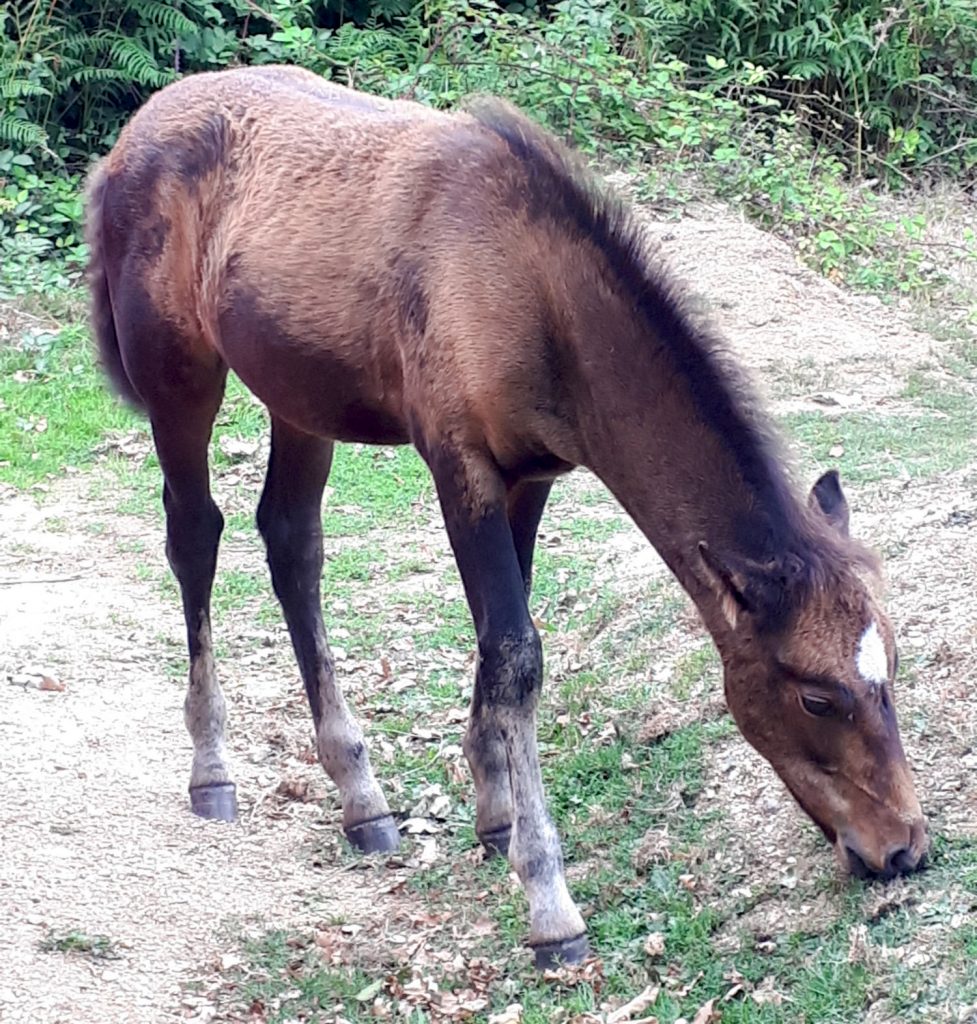 This little foal didn’t seem to have a care in the world and certainly wasn’t going to move out of the way for Buzz!

Seeing these semi-wild ponies in a natural environment is such a pleasure.  They wander and roam freely, going where they want, when they want, just as nature intended. Most of the 3,000 ponies are female with their foals and the stallions who are kept elsewhere are released at just certain times of year.  The New Forest’s 1217 charter gives ‘commoner’s rights’ to residents which includes the rights of pasture of horses, cows and sheep (restricted) and also pigs which are released in the autumn to eat the acorns.  The landscape is so beautiful, with wide open green land, smothered here and there with purple heather and dotted with pretty ponies in all sorts of colours.  Originally the pure breed New Forest ponies were mainly bay but as they have been cross bred there is now a huge diversity of colours, all equally lovely. 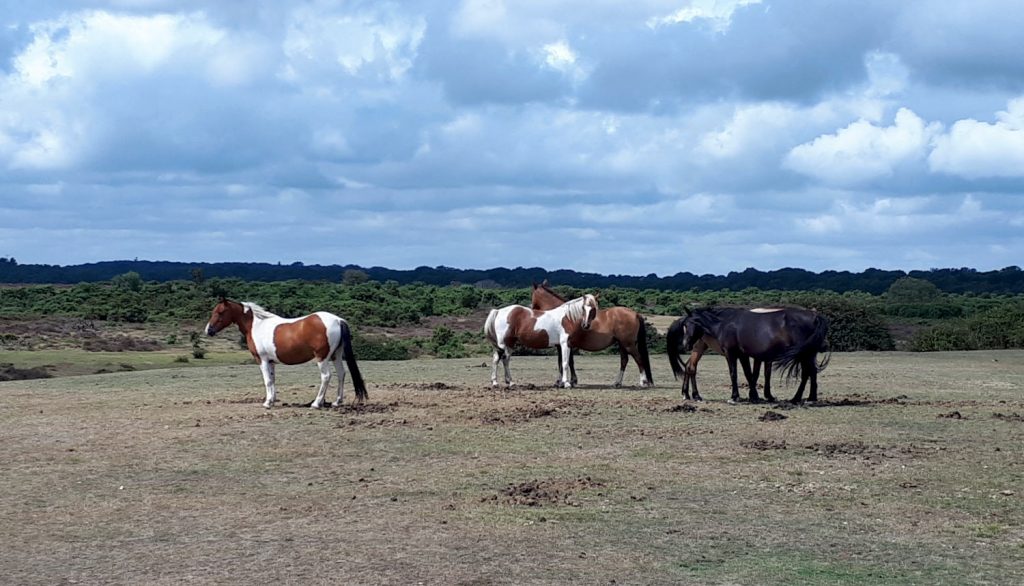 The landscape is lovely on its own but add some ponies into the mix and its just beautiful!

We liked Lyndhurst town. It’s got a lot of character (and unfortunately a lot of traffc!) with some lovely old buildings, quirky tea rooms and pubs festooned with flowers. It was a lot warmer than we were expecting and so we cooled off with a refreshing drink at a pub watching the comings and goings of the high street. 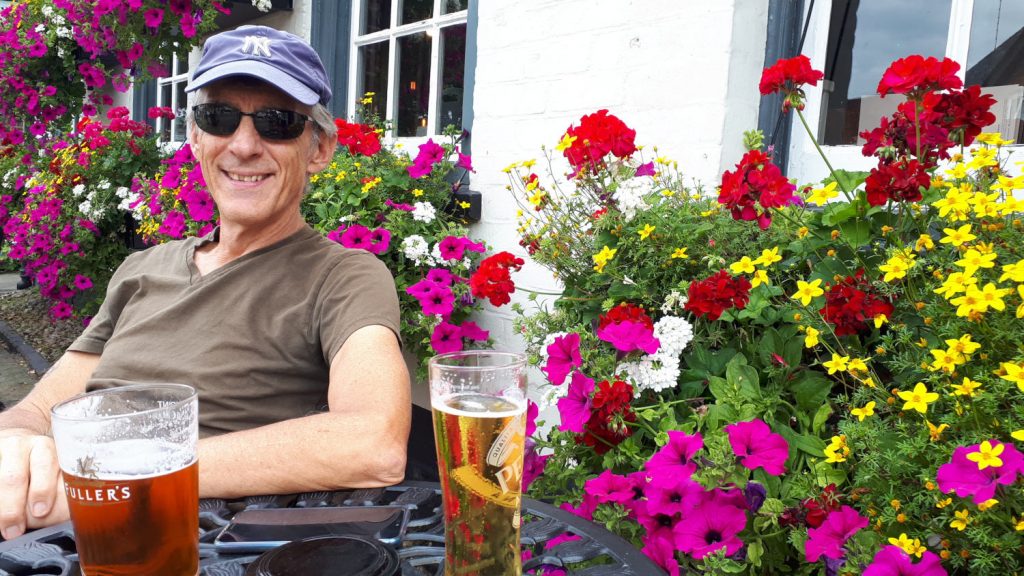 This pretty Lyndhurst pub festooned with flowers and the lure of a cold beer was just too hard to resist.

A bit later on, we went back to the motorhome and drove to the New Forest Inn, ready to get parked and settled before going in for dinner.  Despite arriving early, the car park was completely full. Not only that but it was far too small for Buzz being narrow at the front with just car length spaces and a having a small car park at the back. I went in to ask if there was any more spaces (which there weren’t) and while the staff were very nice they didn’t seem to really understand that you actually need a bit more space for a motorhome rather than a small campervan.  If we’d thought about it beforehand we really should have used Google street view to take a look first.  Unfortunately we had to cancel our booking, as the roads surrounding the pub were also too small, and try to find somewhere else.  We decided not to be fussy and went back to a pub we’d passed which had a large, flat car park (The Swan Inn – theswanlyndhurst.co.uk) but they said they couldn’t allow it as they didn’t have a licence.  A few minutes and a bit of research on our phones later, we found The Filly Inn in Brockenhurst, phoned ahead, booked a table and made our way there for our anniversary dinner.  There were a couple of other motorhomes parked already and after a very nice and very filling meal, we sat down in the bar for a drink and got chatting to our friendly van neighbours and their dog.  Other motorhomers are always fascinated to hear about how we got Buzz and what we’re doing and we love telling the story and hearing theirs too.  They had been motorhoming for 15 years so made us feel like complete beginners all over again!  Saying that we’ve probably spent just as many nights in our motorhome as they have in theirs. 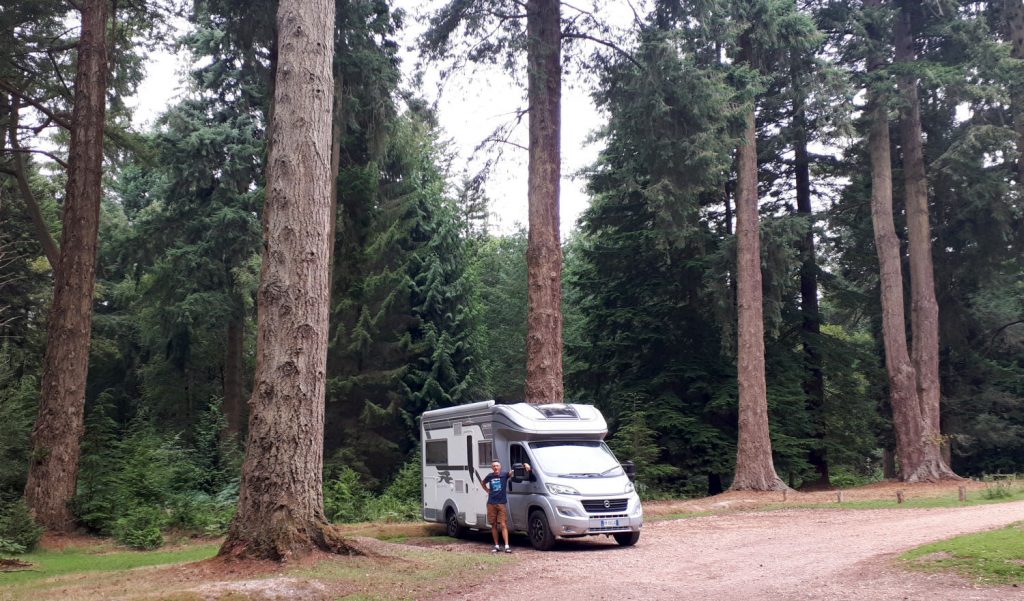 Next morning we drove to the Blackwater Car Park (50.841196, -1.620805) to visit the Blackwater Arboretum and follow the Tall Trees Trail walking past some enormous Coast Redwoods and some of the tallest Douglas Firs in the country.  The Arboretum contains trees from all over the world and some pretty big acorns too!  Lunch was a lovely relaxed picnic on the grass within sight of Buzz, along with plenty of others enjoying the surroundings and generally being lazy. 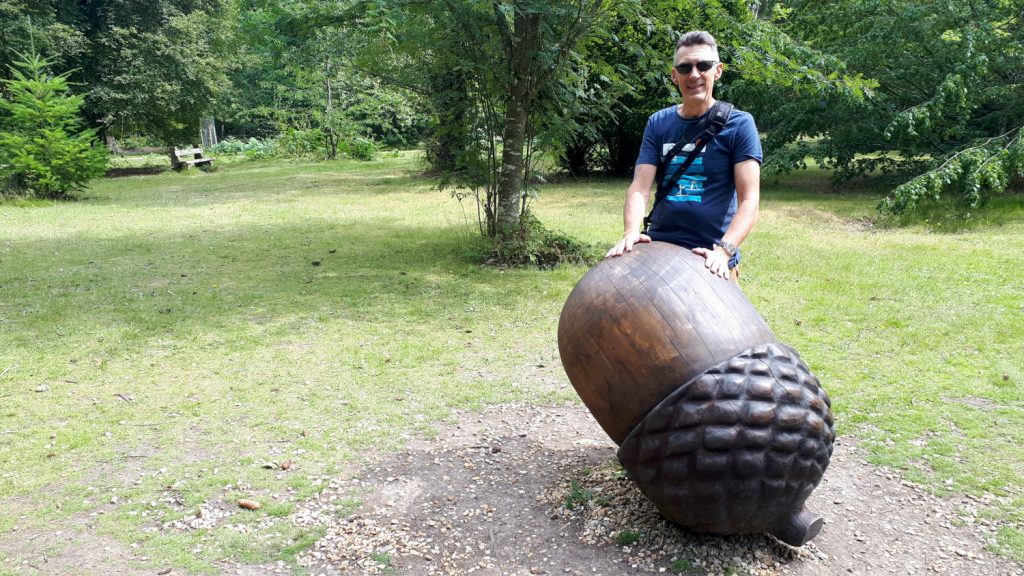 If there are giant acorns, where are the giant squirrels?

For our second night we had intended to stay at the New Forest Cider in Burley but when we got there they said it was only for Brit Stop members, which we are not, purely because it’s only for the UK and when we first got Buzz we headed straight for Europe.  We had to make do with a quick look in the shop, a small tasting of cider and then be on our way. 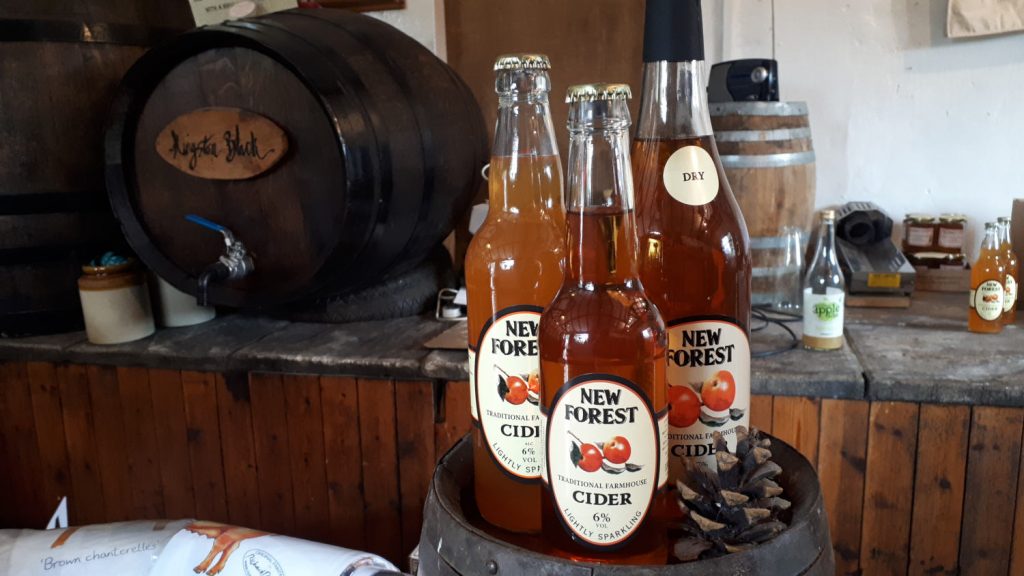 It’s worth a visit to New Forest Cider, where you can taste still and sparkling varieties and buy jams and chutneys in the gift shop or have a drink in the cafe.

We’d spent quite a bit having dinner the night before so didn’t want to go out for another meal so we started looking for alternative parking, coming up with a tucked away spot courtesy of Park4Night.  We passed through the lovely (but very touristy) town of Burley on the way and would like to have stopped but it was teeming with people and cars not to mention horses and even cows all over the road!  Next morning we moved on, stopping at Hockey’s Farm Shop tea room in South Gorley for coffee and a fruit scone and being lucky enough to see 1 day old piglets!  There’s a tempting shop with lots of local produce and we walked out with some delicious Lyburn Farmhouse Cheese.  Scones, piglets and cheese all in one morning – this was a good start to the day!  As we drove along, we noticed a huge field of big yellow sunflowers the size of dinner plates like the ones you see in France and when we did a U turn to go back and have a proper look we realised it was a huge PYO fruit, vegetable and flower farm, The Cat and Fiddle.  We’d never seen one so big or with such a range of produce from sunflowers, gladioli and marigolds to broad and runner beans, sweetcorn, all sorts of berries, courgettes, pumpkins ……… 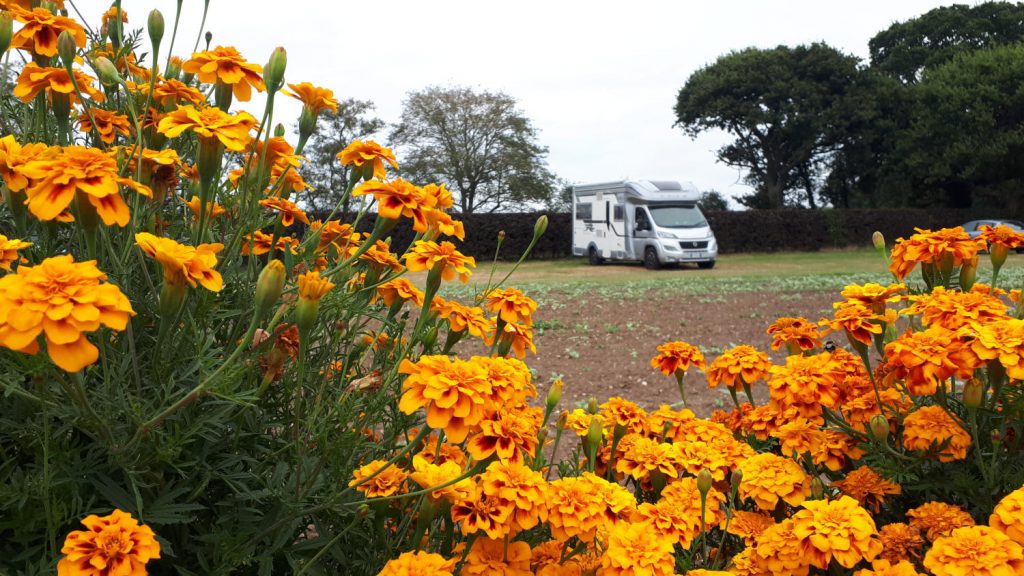 Unfortunately we already had a motorhome full of food but if we’d known we could have had a really good stock up.  But, it was time to move on to a completely new environment.  Still within the New Forest, we headed to Keyhaven Marshes, a coastal area with grazing cattle and views over The Solent and hazy glimpses of The Needles in the far distance.  We found a small parking place by the little harbour from where we could take a walk in the whipping wind over to the beach at Milford and watch a kite surfer at play. 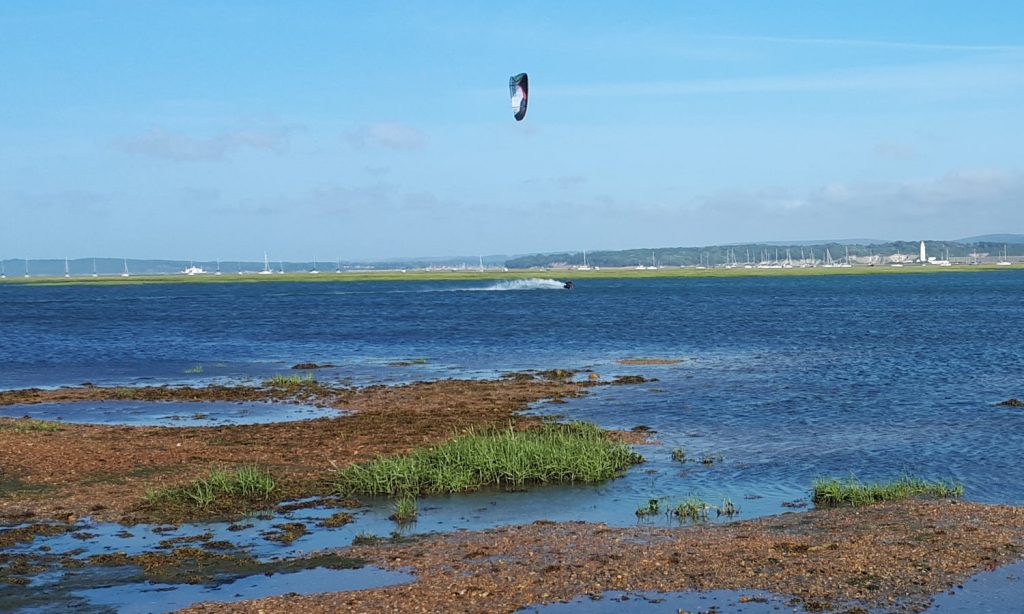 In the morning we took the coastal circular walk following a marked trail around the tip of the marsh, meeting a nice couple along the way who asked if we knew where we were going. A response of ‘not really’ got us chatting and funnily enough they were motorhomers too, parked a bit further away at a campsite.  They’ve had years of travelling in Europe and now for the time being concentrate on the UK, this being one of their favourite places and we can definitely see why. 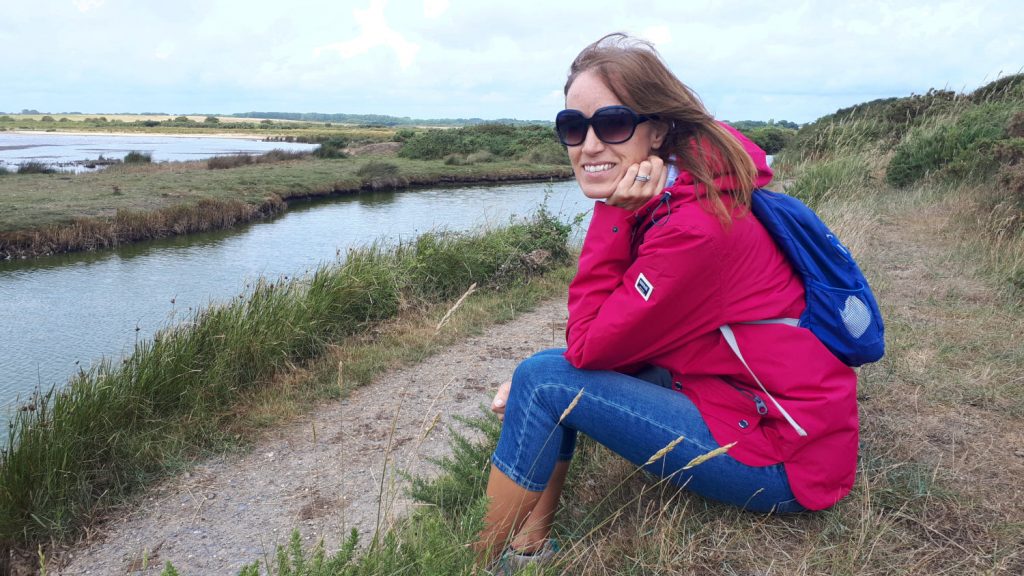 Stopping to admire the view and have a coffee.