Ever since we drove past last year we’d been thinking about visiting Futuroscope.   This is a unique mainly cinematic and simulator ride theme park near Poitiers with amazing futuristic architecture. It’s also France’s most popular amusement park after Disneyland with fantastical films in 3d and Imax 4d, super simulated rides, planetarium style films, a sky high bar and rotating viewing platform.  Motorhome parking is quite reasonable at €13 from 4.30pm until 10am the next day and there’s plenty of it including all services except for EHU. 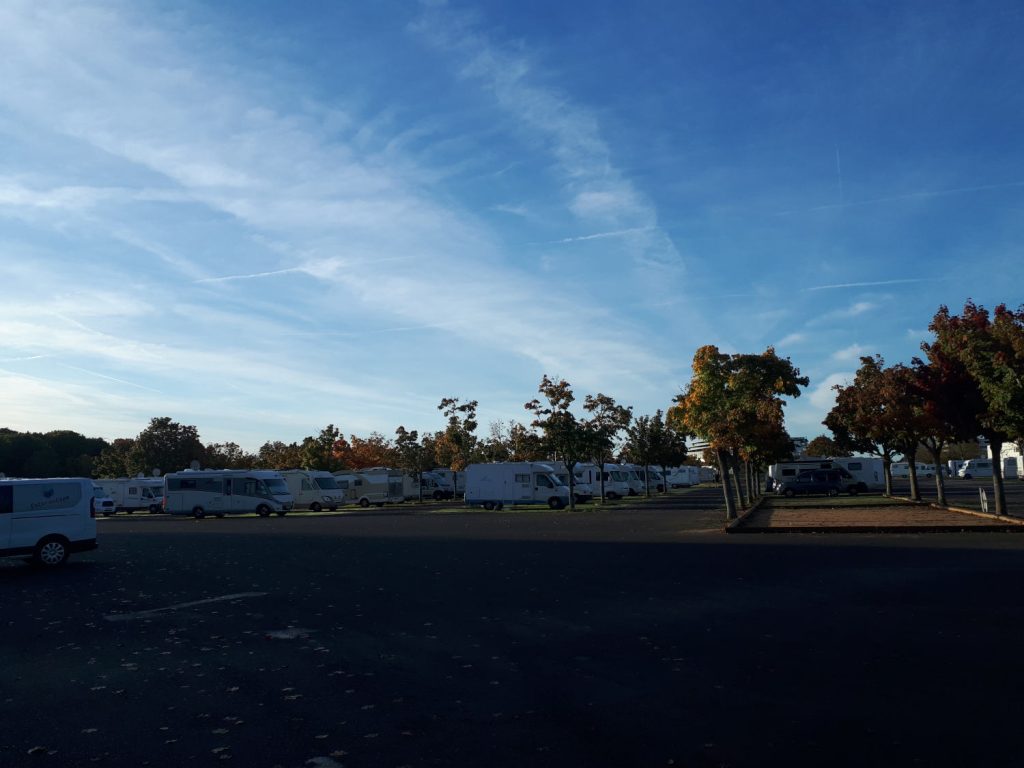 Futuroscope has a dedicated motorhome parking area and plenty of it!

After parking up we had a walk around but there wasn’t really anywhere to go so we were back in the van fairly early, just relaxing, having dinner and ready for a good night’s sleep.  The next day we were straight up and out and as we got into the park and started walking around it didn’t take us long to notice that we were pretty much the only adults there without children! At €45 per adult and €37 for children it’s not exactly a cheap day out so we were actually quite glad we only had to pay for the two of us.  During our day we discovered there’s plenty to keep you occupied for the whole day and evening so if you like a laugh and want to do something a bit different it’s probably worth it. 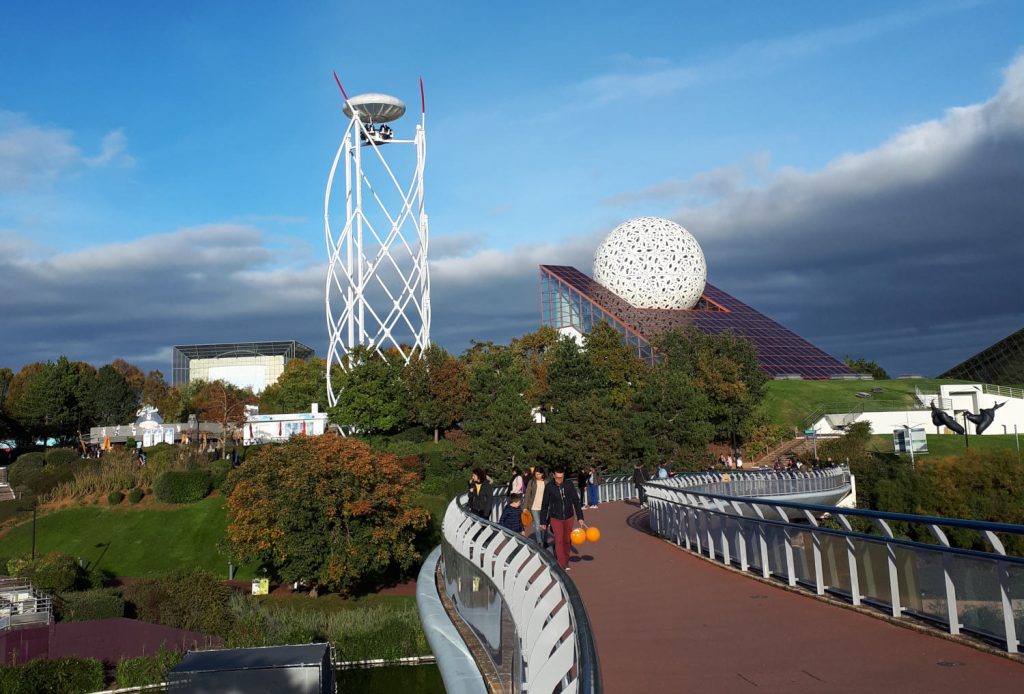 Walking through the park

It doesn’t take long to notice the futuristic architecture dotted all around the site.  Even the walkways are eye-catching.  If you have a head for heights you can have a drink with a view at the Aerobar. But you do have to pay 6 euros extra for the privilege! 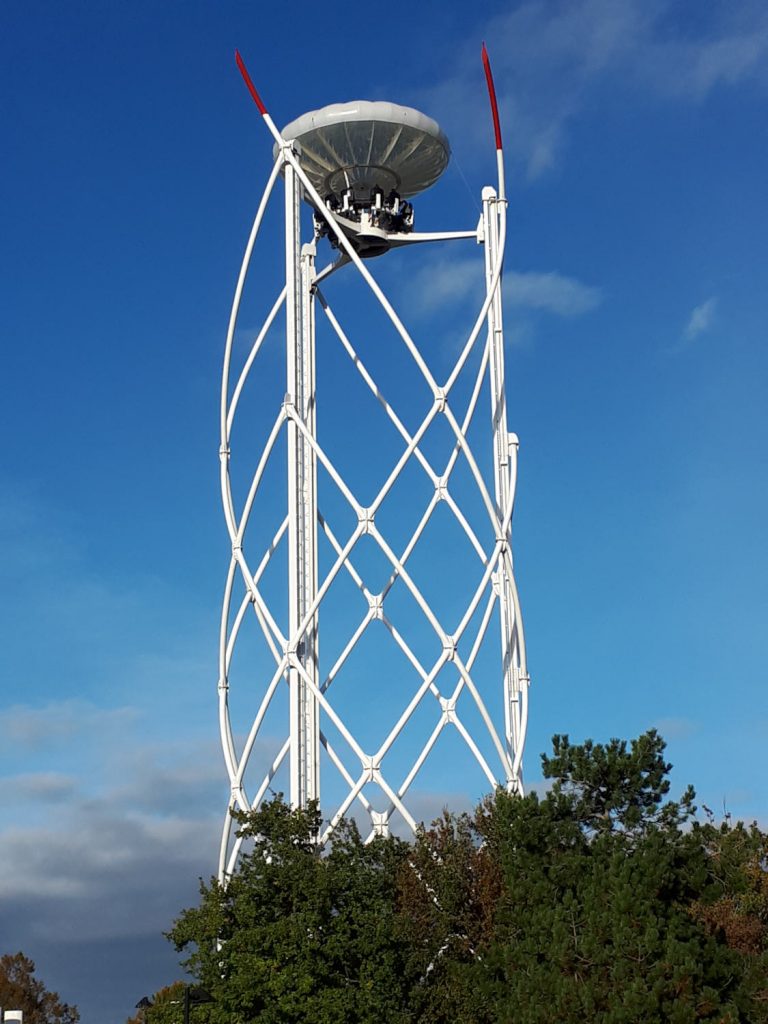 The Aerobar where you can have a drink 115ft up!

A lot of the attractions are indoor and screen based making Futuroscope a great place to go if the weather’s not so good.  For us it was cloudy and cool when we arrived in the morning but improved as the day went on.  We particularly enjoyed the astronomy film showing in the Imax theatre. Although sitting next to a white bearded man who insisted on stroking it and picking various ufos (unidentified foreign objects) out of it the entire time was more than a bit disconcerting , distracting and actually quite disgusting! 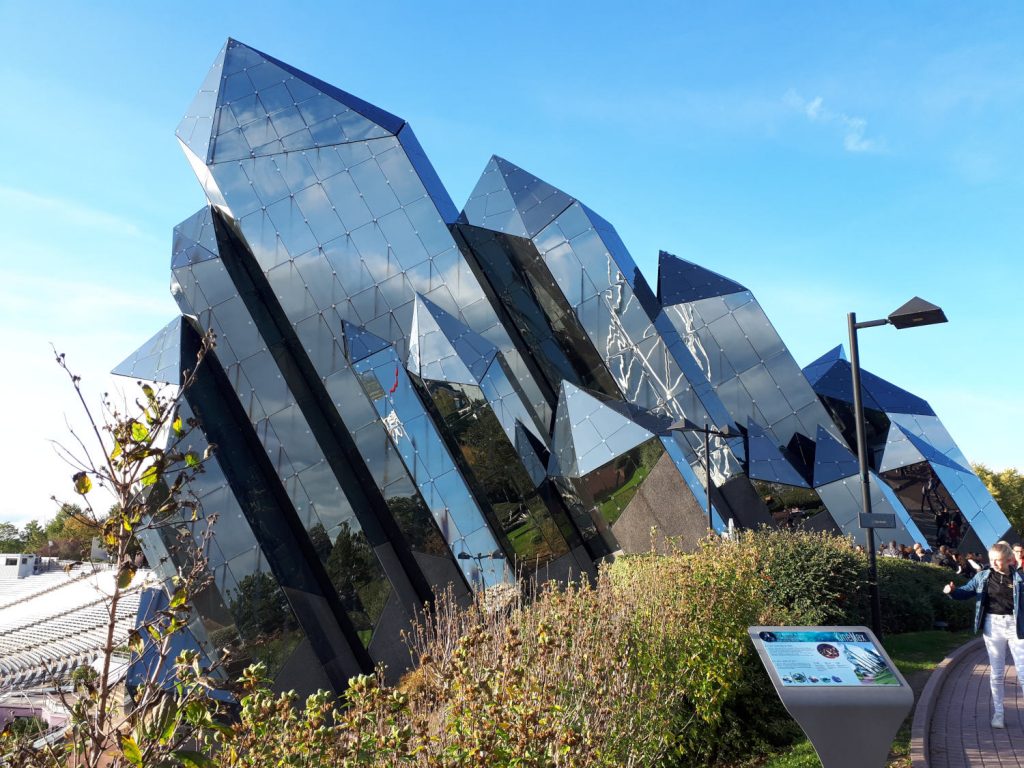 There are dozens of places to eat and drink at Futuroscope.  Getting a full cup of coffee was a challenge though.  We ordered two cafe lattes and received one full cup that was really milky and one half cup that was almost black.  Strangely the cafe worker didn’t seem to think it was problem and was rather bemused when we pointed out the difference, reluctantly making one of them again.  Third time lucky?  Well no not really.  This time it came out 3/4 full and still very dark.  We didn’t want to make a fuss but we did want two decent coffees so eventually managed to get an extra cup of hot milk to top up with! 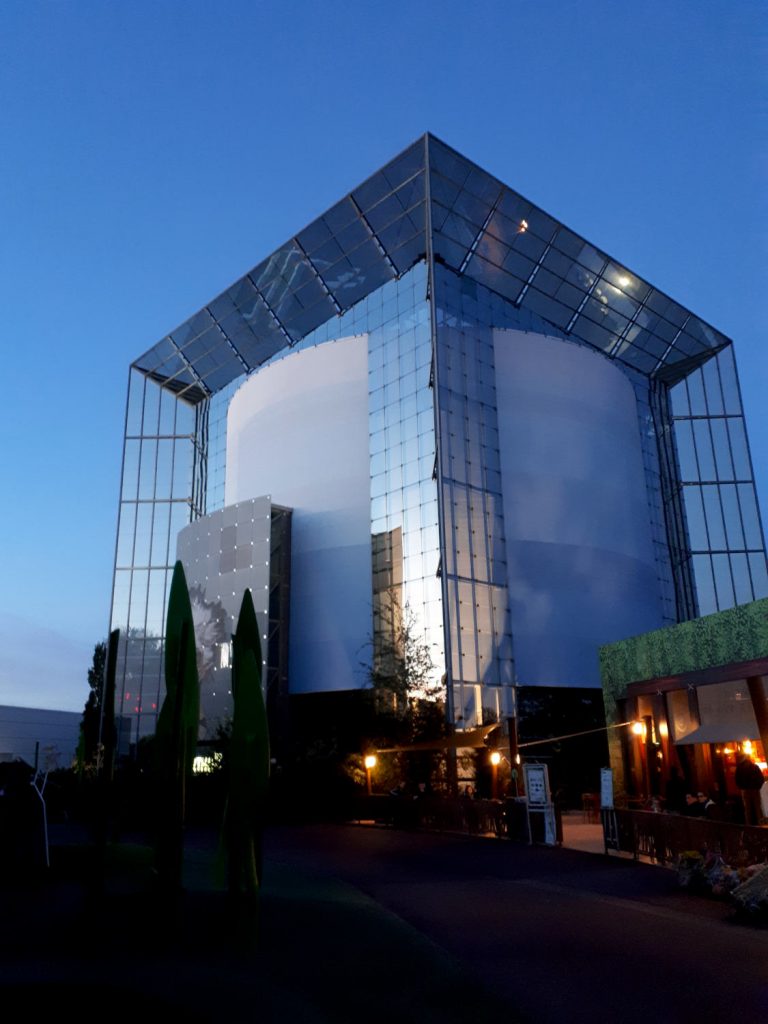 As evening came and the sky darkened, multi coloured lights came on giving the park a magical feel and making the architecture stand out even more.  Every evening there’s a Cirque de Soleil sound and light show but it didn’t start until 9.30 which we decided was a cunning ploy to get you to have dinner first.  It worked!  We were thirsty and hungy by evening and the cosy looking restaurants were too much to resist.  Although very busy, service was good and we enjoyed a drink and tasty pizza, warming up nicely before going out to watch the show.

The show lasted 30 minutes and was a real visual spectacle.  It felt quite celebratory which is just what we wanted for the end of our trip.