Augsburg – a good day and a bad night

Augsburg – a good day and a bad night

It would be impossible to love everywhere we go and when we first arrived at Augsburg we weren’t sure we were even going to like it. It had been on our ‘go to’ list ever since we decided to drive the Romantic Road as every guide we looked at sung its praises and it was one of the places you ‘must visit’ so maybe that was half the problem as expectations were high. It’s always better to have lower expectations and be pleasantly surprised than the other way around. Saying that we nearly didn’t make it all, accidentally dropping off the Romantic Road and driving East for an hour rather than South, not noticing until we suddenly realised we hadn’t seen a sign for quite some time! Generally speaking the Romantische Strasse road signs are pretty good but now and again they seem to disappear off the face of the earth and you are left guessing which exit to take off a roundabout. 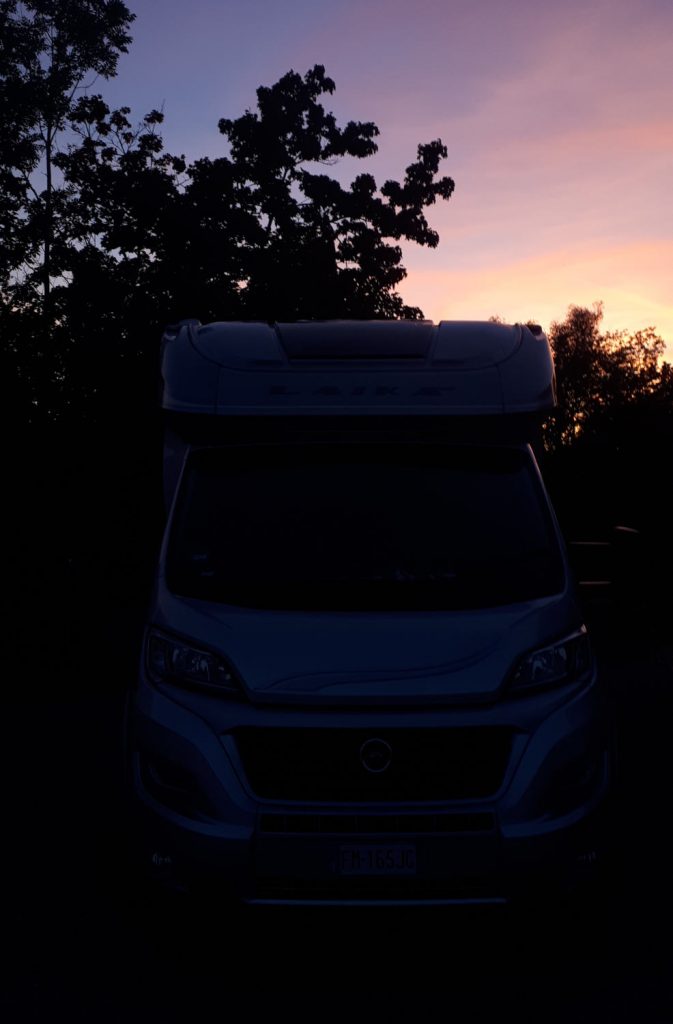 Buzz Laika the motorhome parked for the night in Augsburg

We eventually arrived in the late afternoon finding a nice spot by a river to park with several other motorhomes in the dedicated parking area. It was quite near a busy road so we were a little bit concerned about traffic noise but as it was that was the least of our problems. More about that later.

The town was 20 minutes walk away so as it was quite late in the day we decided to just have a preliminary look around leaving the full tour until the next day. The walk in was unremarkable and arriving in the centre just seemed a bit plain. We’ve been to so many ‘pretty’ places it didn’t really seem to stack up. Augsburg is the largest town in Bavaria though and one of Germany’s oldest being the site of a Roman camp in 15BC so can’t really be compared to a quaint little village. One misconception though is that the old towns will actually look old. So many were destroyed in World War II that many of the historic buildings were lost and those built in their place just don’t have the same charm.

The Königsplatz – one of Augsburgs main squares

We made our way, slightly disheartened, back to Buzz to make dinner and we had a nice evening playing scrabble, doing crosswords, sudoku and chatting over a couple of glasses of wine. All seemed well until about 10pm when we suddenly heard loud voices coming from behind us by the river. We tried peering out the windows but it was dark and we couldn’t see anything but there was obviously a boisterous gathering intent on having a good time. The music, shouting, cheering and overall annoying racket got louder and louder and unfortunately didn’t stop until the early hours. The traffic noise wasn’t a problem after all. We couldn’t hear a single thing over the noise these people were making!

Fed up but undeterred we returned to the town in the morning going deeper into the ‘historic’ centre. The sun came out, there was music playing, the town squares were busy and there was some sort of event going on. We walked along the main street, Maximilian Strasse, admiring the handsome buildings and tall fountains which were built to celebrate the town’s 1600th birthday. As we strolled along the street we finally felt we’d found the heart of the city and were starting to see its character. 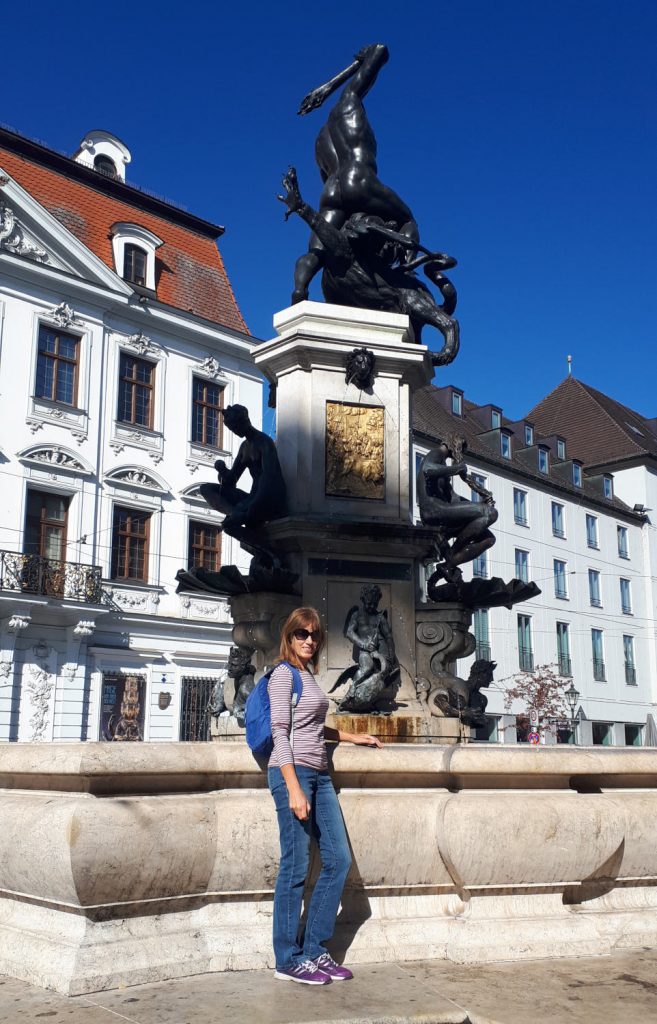 Maximillian Strasse and one of the street’s three large fountains

The city’s 11th century cathedral, Dom Unserer Lieben Frau (Cathedral of the Holy Virgin), sits proudly at the end of the street and is adorned with some of the oldest stained glass windows in Germany dating from 1140. The interior was particularly interesting with stone plaques and carvings inlaid into the walls. We’ve been inside many, many churches and cathedrals over the last year or so and sometimes don’t bother anymore but we were glad we went in this one as it had a really nice feel about it unlike many of the overly elaborate ones we’ve visited. 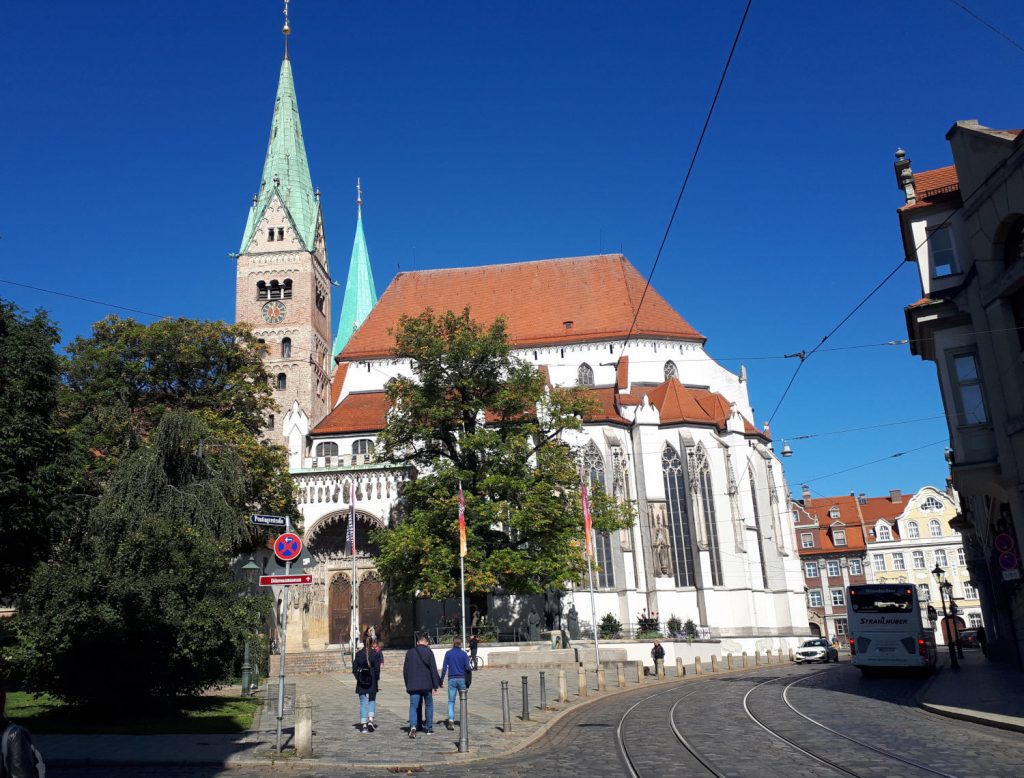 The 11th century Dom Unserer Lieben Frau and look at that blue sky!

On the other side of town we went to take a look at The Fuggerei, Europe’s first social housing set up by the wealthy Fugger family in 1516. It was intended to house the town’s poorest families in a pleasant arrangement with 52 houses set amongst gardens, and did so for many years. These days things have changed and it is now home to retired residents. One thing hasn’t changed though, residents, as in the past, have to pay just 1 euro rent per year and vow to pray for the good fortune of the Fugger family!  You can buy a ticket to go right into the ‘village’, being considerate of people’s homes, but we settled for a look down the street. 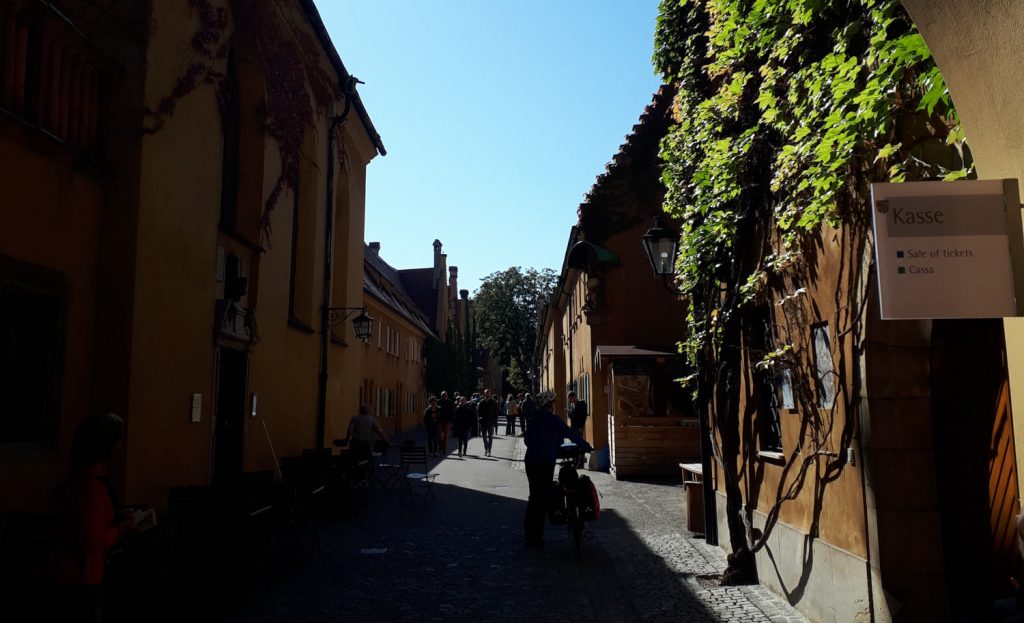 The entrance to The Fuggerei, now an enclosed retirement village

Circling the town, we made our way back to the main town square and sat in a little cafe for a coffee with a lovely view of the Perlach Tower and Town Hall, or as they say in German ‘Rathaus’. It was the ideal place to sit, listening to the music and indulging in a spot of people watching for a few minutes before carrying on. 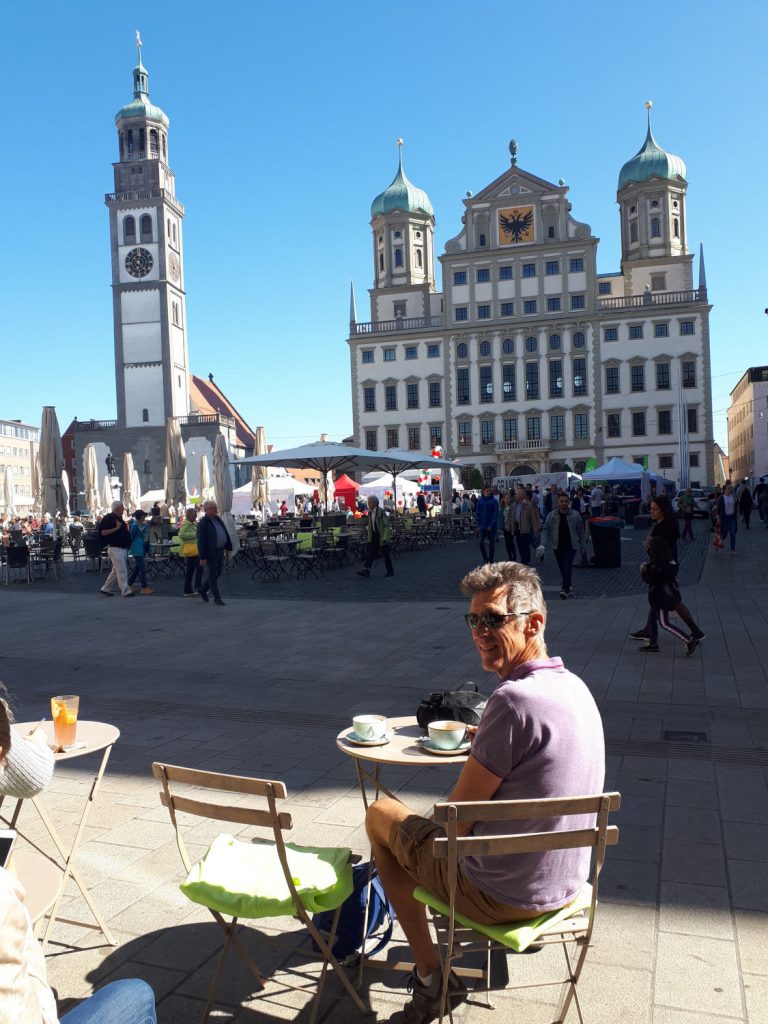 A fine place for a coffee break

By the end of our visit we felt more positive about the place. We’d noticed many impressive grand old buildings, the colourful trams went by, the fountains flowed, the buskers played and the whole place seemed to have come alive. Suddenly all the ingredients for a pleasurable visit fell into place and by the time we left we really did like it. We didn’t love it but we liked it and you can’t love them all!