Coimbra – An ancient seat of learning

Coimbra – An ancient seat of learning

On our way to the University city of Coimbra we decided to break the journey up and stop at Leiria for the night as it had a large free parking area at the football stadium. A nice 24,000 seat stadium much too big for the town built for Euro 2004, which unfortunately saddled the town with a massive 50million euro debt to be serviced, ouch! However as we approached said parking it became apparent all was not well, the car park was full and getting fuller of tents, marquees, stages and a fair, all in readiness for a big festival in May.  Luckily however a quick scout around offered us a potential alternative just across the road but as there were no other motorhomes there you are never quite sure. Taking the chance we parked Buzz had a nice hot brew then set off for a quick explore  – as we were here, why not? 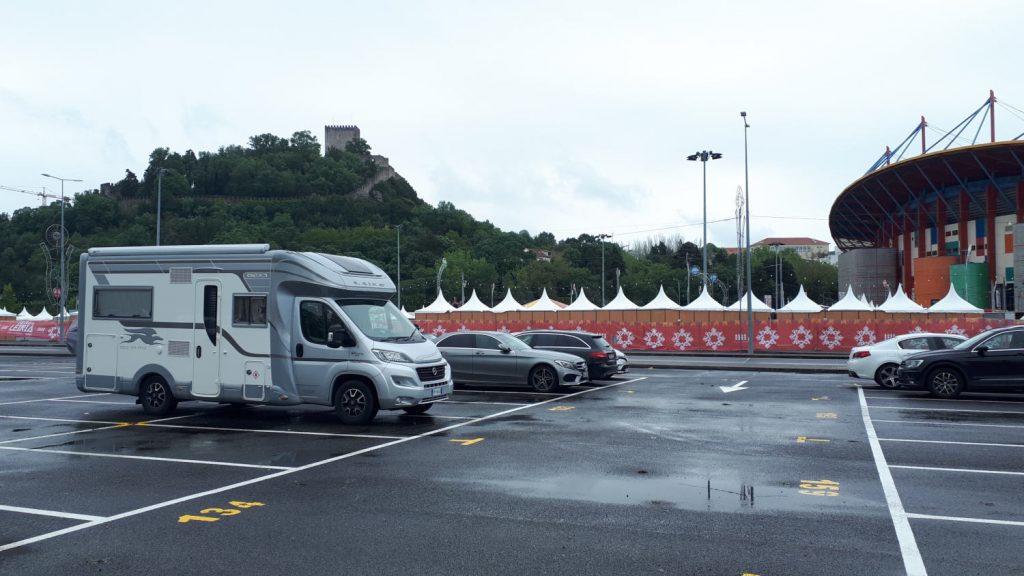 Leiria is one of those places with some nice features, a small attractive looking castle perched high above the town on a hill, some lovely old buildings and open squares. That however is offset by the amount of empty, crumbling and decrepit buildings littering its lovely back streets, this is one of the conundrums with Portugal lovely old buildings sit cheek by jowl with rotting decay. Beautiful building façades in a state of disrepair with at best nothing behind them at worst a pile of collapsed debris, so sad and Leiria unfortunately had more than its fair share. That said there was a lot of work under way renovating many old buildings, hopefully they will get most of them done and turned back into useful buildings and homes again. For now we had a pleasant couple of hours wandering around the town, there was a fair amount of street art some of which was interesting and very good. On top of that when we returned to Buzz his magnetic effect had attracted a couple of other motorhomes and by the end of the evening there were half a dozen there with us. Buzz does seem to have that effect! 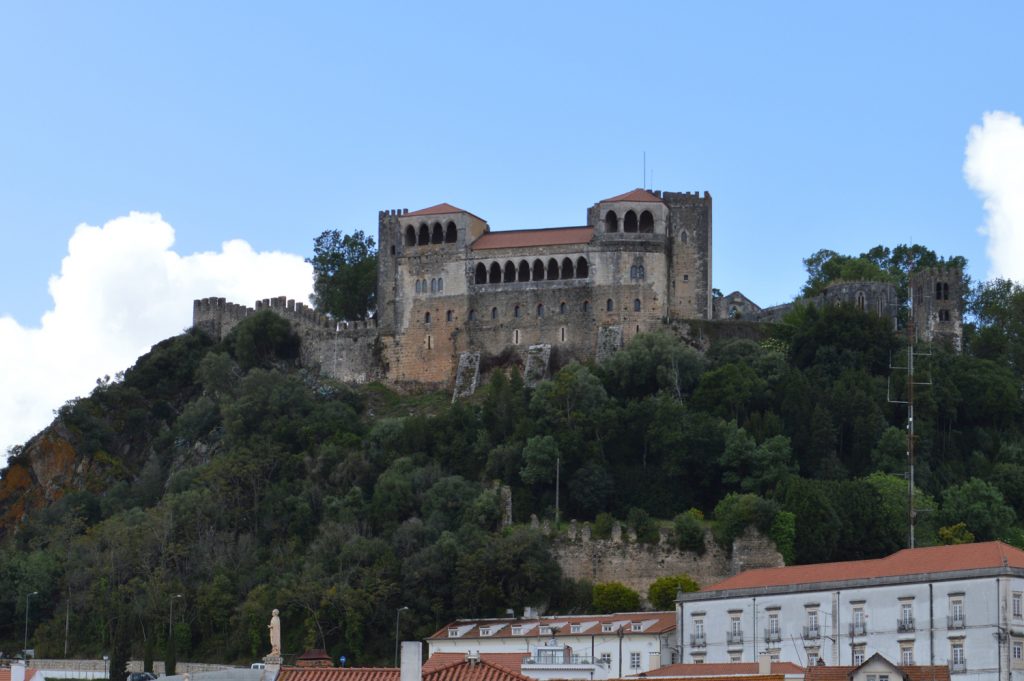 Leiria – Castle sat atop the hill

After a quiet night the next morning saw us heading for our main target Coimbra (pronounced queembra), another of Portugal’s gems and home to its oldest and one of the worlds oldest continuously operating universities and UNESCO World Heritage site since 2013. Founded in 1290 by Royal Charter of King D Dinis, it has been in continuous use since then although in the early days it did move back and forth to Lisbon before finally settling in Coimbra in 1537 by royal decree of King Joao III and it has been there ever since. Based on a hill and site of a former Moorish fortress sitting high above the rest of the town it is an impressive sight to see. The jewel (architecturally) is the Biblioteca Joanina built between 1717-1728 it houses some 60,000 books written in Latin from before the 18th century including many great European works and is decorated with carved wood and Brazilian gold leaf. More on the library later. 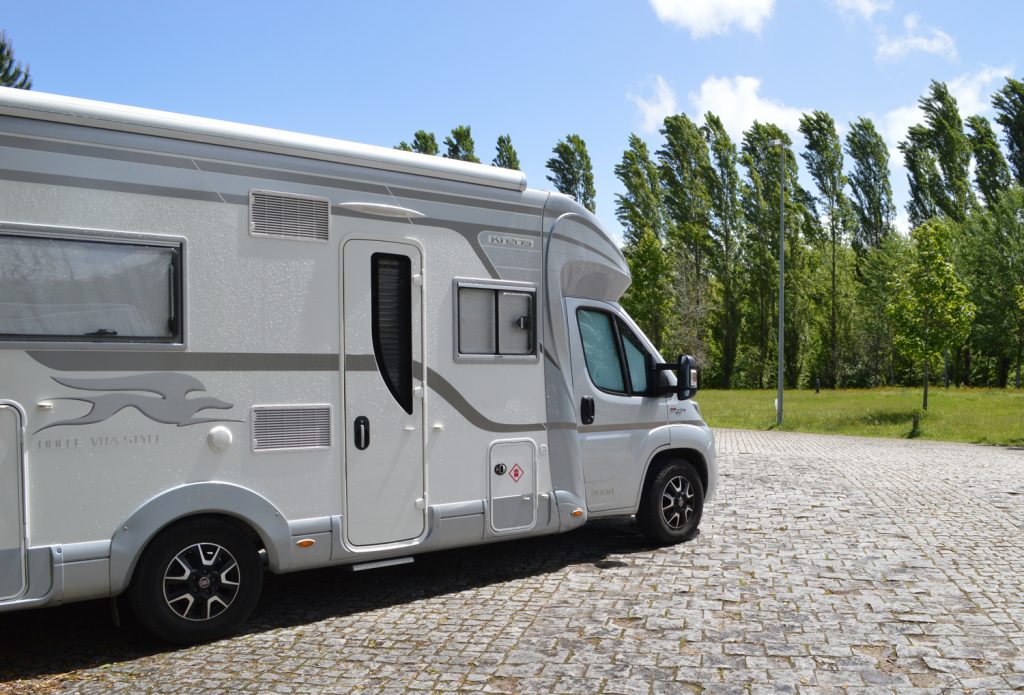 Our visit began with finding parking for Buzz, which in the event was very easy parking by the river near the swimming pool where there is plenty of free parking available, certainly at this time of year. However that might not be the case at the height of the season so check if going. Once parked and set up we decided to make the most of the day with an initial recce of the town, particularly as the weather over the next few days was due to be changeable. Walking across a nice foot bridge and along a pleasant riverside walk you are in the town in about 10 minutes and we were immediately struck by it’s attractive buildings and main shopping street. Not only that but the very nice bun and ice cream shops, deciding to stay on the lower streets and save the upper part of the town for days to come. We enjoyed a pleasant wander down towards Praca 8 de Maio and the Santa Cruz church, then turning left into the tiny back streets and alleyways dotted with little shops, bars and restaurants. It’s like a maze in there you can turn this way and that finding yourself back where you started but seeing something different every time, eventually we ended up at the Praca do Comercio just off the Rua Ferreira Borges or where we had started. At which point the heavens opened forcing us into a Pastelaria, so as they say ‘when in Rome’. This was the signal for some bun and a beer while we waited out the rain, as it is the rain lasted for 2 beers at which point we made a dash for Buzz. 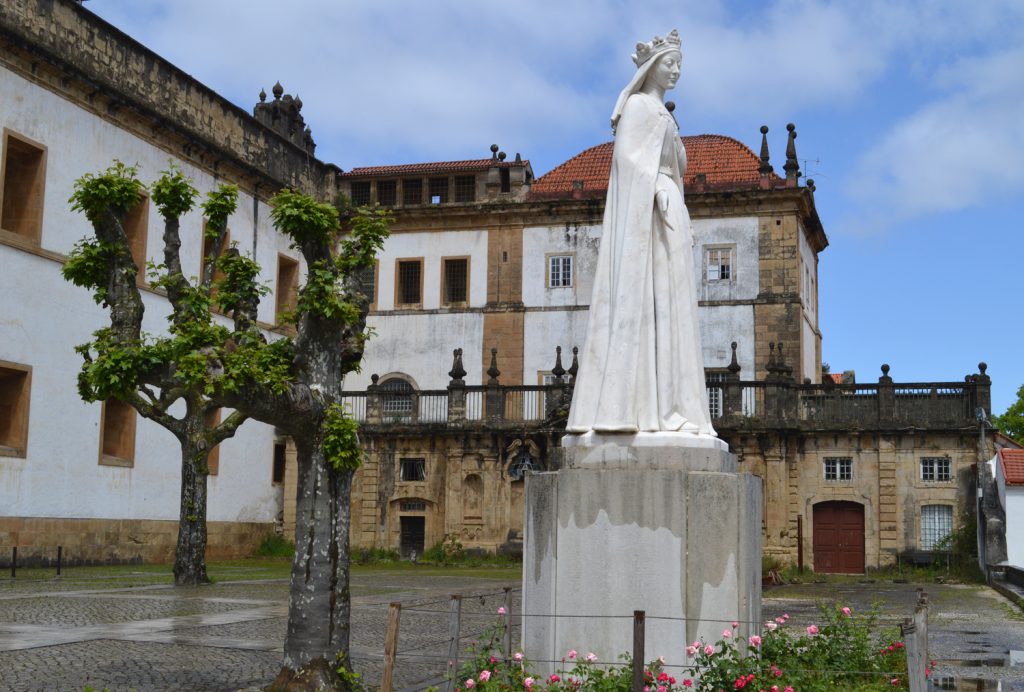 Next morning with a forecast for periods of sun, cloud and showers we set off to explore the lower reaches of this pretty city, starting with the south bank of the city walking up to the Mosteoro De Santa Clara-A-Nova before wandering back and across the river to the little streets below the university. There are some lovely alleyways and small lanes full of character, where we found the Casa Fado Ao Centro booking to see the early show at 6.30 which comes with a free glass of port. We carried on wandering stopping for a coffee or diving in a church to dodge the odd rain shower until it was time for the show. As time seems to fly when we are out so it did, before long we were sat at Casa Fado Ao Centro waiting for the performance to start. As we waited for the doors to open we watched a French couple with the wife trying to take a photo of the husband with a statue of a lady sitting, he would pose say cheese and she would click away with the phone, to no avail, no picture he would show here how to do it then re-pose say cheese and nothing, this went on for ages as she failed to take a single picture in the end they discussed with several people why she couldn’t do it and he took a selfie instead. Back to the Fado, this particular type of Fado is exclusive to Coimbra  – Fado de Coimbra – even the Fado guitar is unique to the city, the performance was interspersed with a film about the story of Coimbra de Fado and descriptions of the songs. A great experience full of passion and fun, with audience participation required. 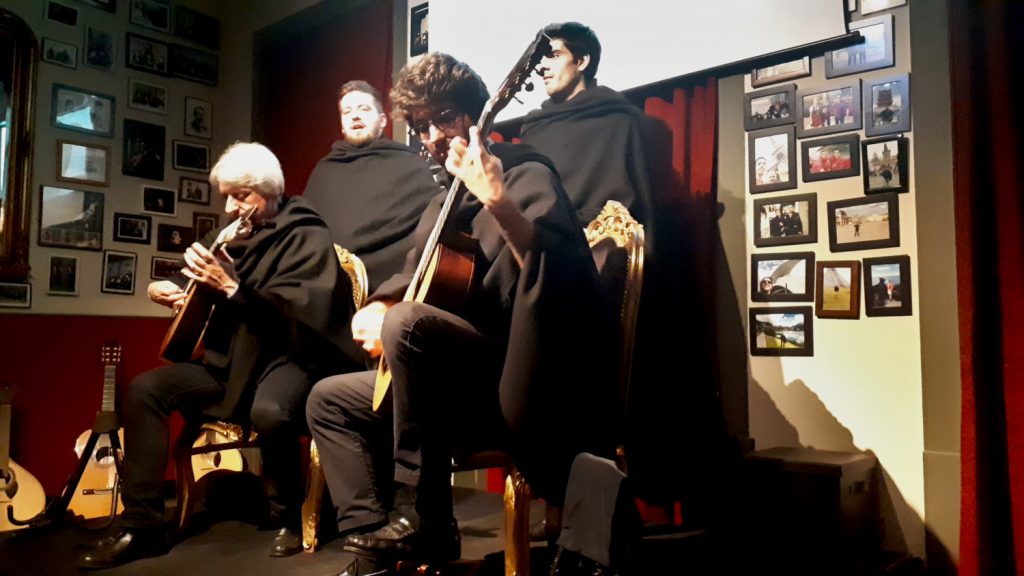 After the performance as we drank our port and reflected on what we had listened to with the rain pounding on the roof of the little yard where the drinks were served. Luckily it stopped just as we left, looking for somewhere to eat. We set off looking for a restaurant recommended in the Rough Guide, buried in the labyrinthine streets. We were about to give up when we realised we were stood next to it and yes it had shut down obviously some time ago. So the hunt for somewhere to eat led us back to the Fado centre and a Tapas restaurant next door, grabbing the last table we sat down to order what turned out to be pricey but very nice posh tapas which was very tasty. 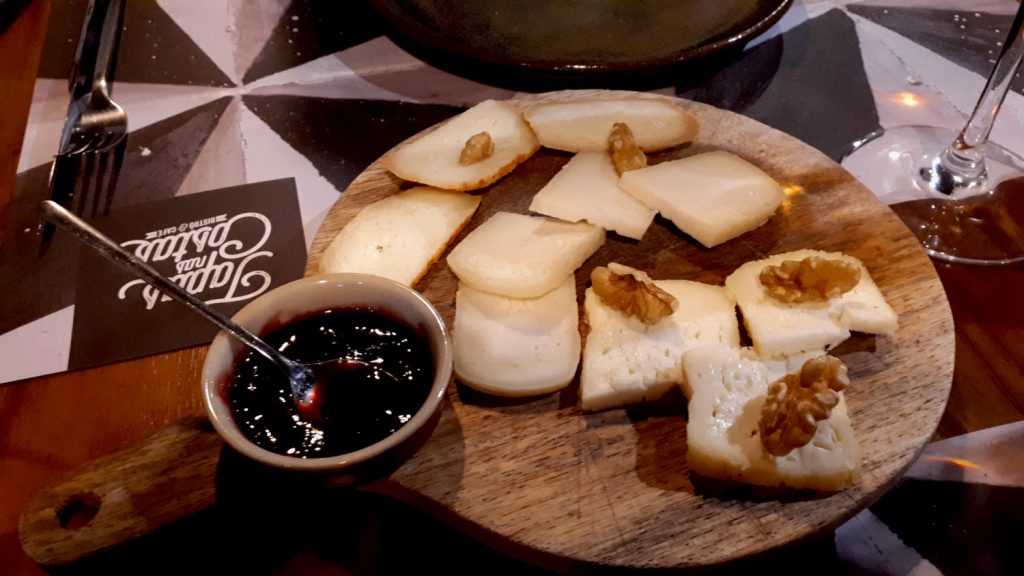 The next day saw us heading for the university via the university botanical gardens started in 1772 and covering 30 acres, as it turned out a lot of the gardens were closed due to storm damage being repaired. They are however still very interesting with an enormous range of trees and plants to see. The gardens lead up to the University where we went straight to the ticket office as the Library requires a timed booking and we didn’t want to miss it. With our time of 13.20 we set off to explore the other buildings around the library, St Michaels Chapel with it’s tiled walls and amazing organ from 1733. As well as the Royal Palace where many of the Kings of Portugal were born from 1131 onwards, library aside history oozes out of every brick, crack and plank of wood. 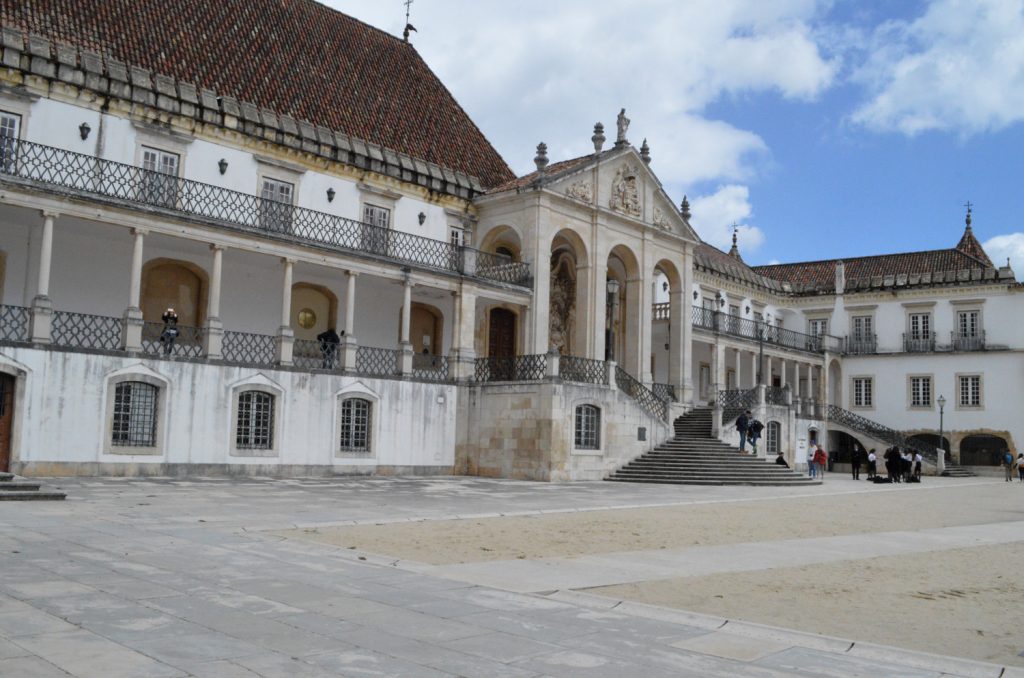 The Joanine Library is the jewel in the crown but the visit is a bit strange in that you are initially allowed into the basement or ‘Academic prison’ where students were sent for misbehaving, after 10 minutes you go up to the next floor of the library. This holds some great works but is fairly plain, after 10 minutes you are allowed up to the main part of the library where the real treasures are. The room is stunning of that there is no doubt but you cannot take photos at all (which you can on the other 2 floors) and at no stage in the whole visit is there any explanation or commentary and you are shut in the main library until your time is up at which point out you go. It is amazing and you have to see it but it could be so much more interesting. 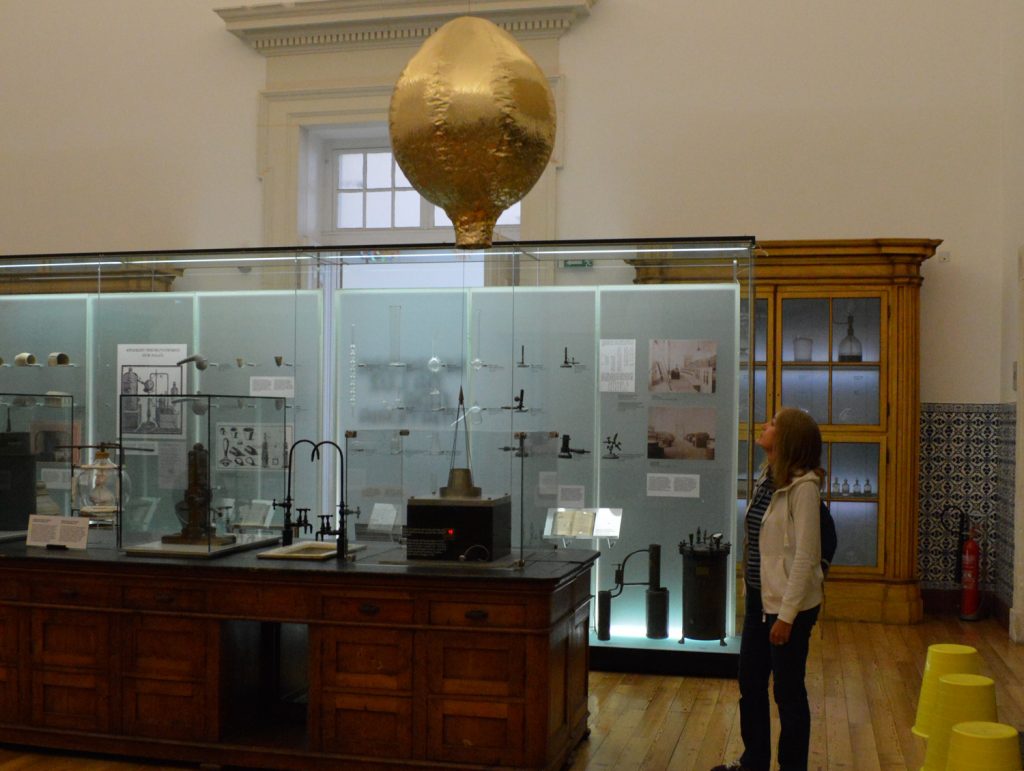 After our visit to the library we walked over to the last place on our all inclusive ticket the University Science museum and chemistry laboratory, this was interesting with some interactive light and matter experiments and a large collection of stuffed animal, sea creatures and birds. From there it was time for a wander back to Buzz and time for us to leave Coimbra, the weather was looking up and onwards to Aveiro.