Castelo de Vide – A Birthday not to be forgotten

Castelo de Vide – A Birthday not to be forgotten

Having discovered Buzz could not stay overnight at Marvao we looked for somewhere close, deciding on Castelo de Vide. We had intended visiting anyway and as it turned out the parking spot was right under the town wall, so parking up we felt pleased with our spot although the view at Marvao would have been nice it wasn’t to be. 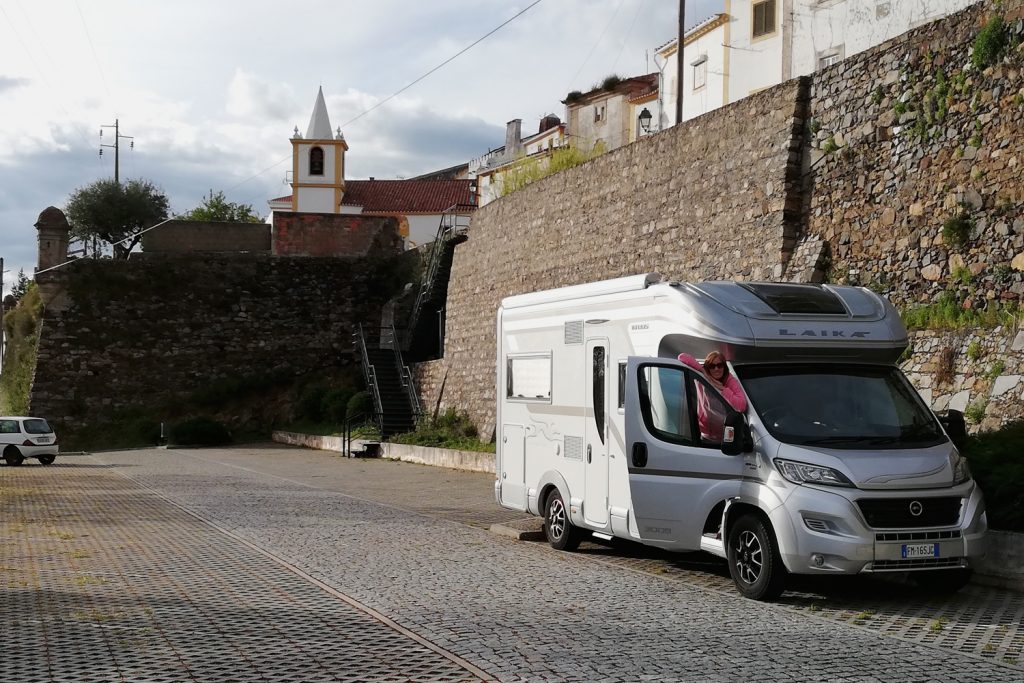 With Buzz parked up we had a quick walk into town, finding our way up to the main square at Praca de Dom Pedro V with its enormous church. The square is surrounded by bars, restaurants and shops and with the sun still out and nice and hot we stopped in for a beer sitting out in the afternoon warmth, watching people come and go there was certainly plenty of activity to keep us occupied. There were a group in the process of setting up a dodgems ride and what appeared to be a temporary but closed snack trailer, offering Churros, farturas and other tempting offerings. 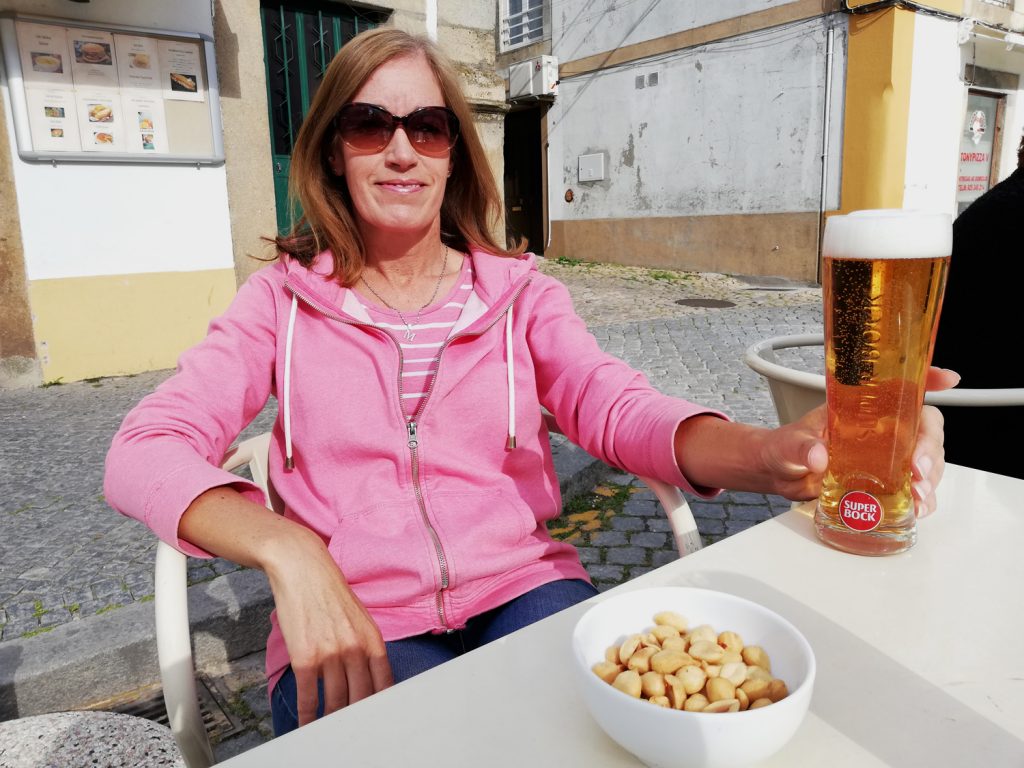 Castelo de Vide – A Beer in the sun

A further wander around some of the streets to orientate ourselves saw us coming back to the Praca and as the sun was still clinging on we had another beer before retiring to Buzz to cook dinner. Tomorrow was a big day, for one of us at least with a full day of acting grown up on the horizon. However as occasionally happens we found a new sound to wakes us up, having just gone to bed had a read then settled down, starting to drift off then right on cue all hell broke loose. An air raid siren started up, for those not old enough to have heard one (every town used to have one and test them) they are very, very loud and this one was just down the road and went on for sometime. Our best guess was Bomberios (fire fighters) which proved to be right, we both just burst out laughing at the same time. Oh well that’s life in a new location most nights. 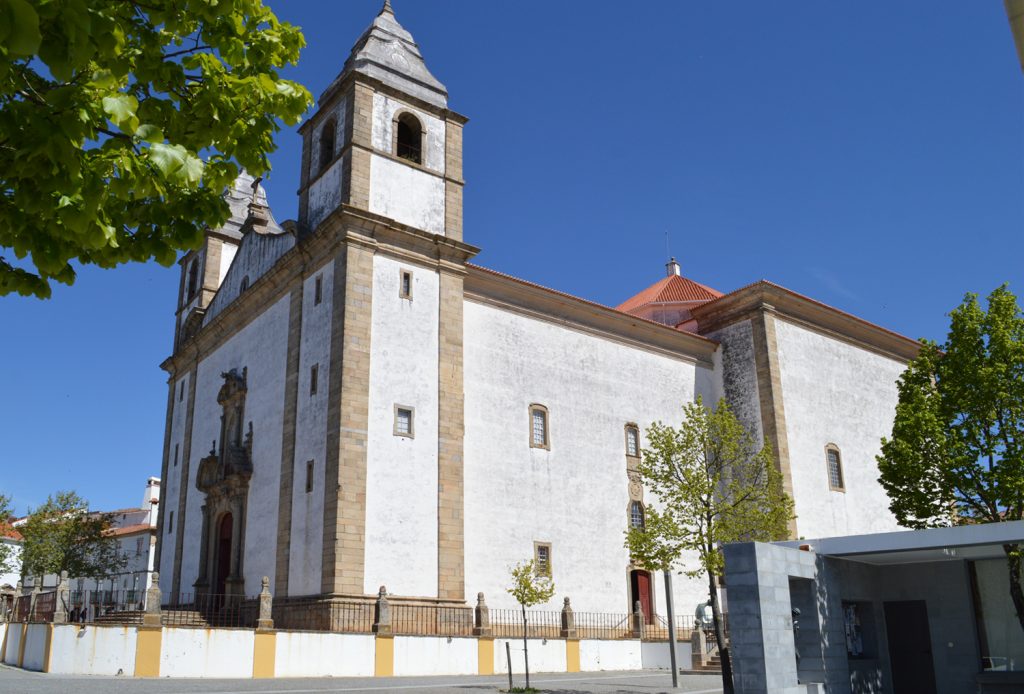 Having not had to think about my 60th birthday before I could never have imagined celebrating it doing what we are but here we are and I couldn’t have planned it any better. Obviously a big party with family and friends but that can wait. So it was that a bright sunny day greeted me on the last day of my 60th year. With my couple of cards and presents opened, breakfast done and dusted we took a leisurely walk over to the small local market, then up into town going first to the main square and tourist information. As we wandered around the square we were amazed to see so many people all milling about, in cafes and restaurants, in and out of shops. It was bustling and busy. We decided on a coffee and small piece of cake so we could check the map and make a rough plan of what we wanted to see, we also booked a restaurant for dinner D Pedro V.  The first time we have booked any restaurant since we have been away, usually just taking potluck. 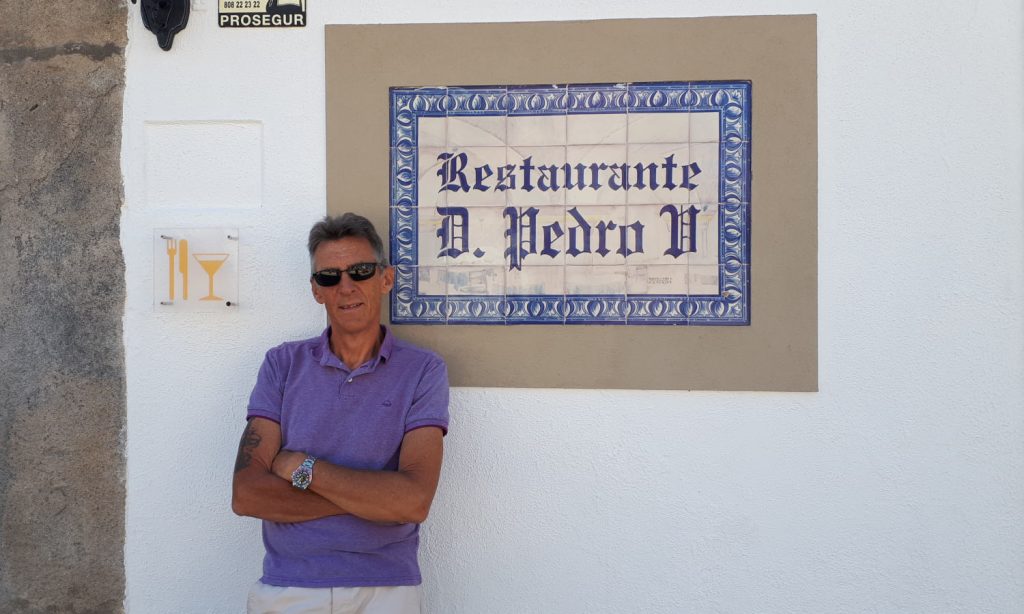 Our restaurant of choice for my birthday dinner

As it happens Castelo de Vide has several claims to fame, 1, it is renowned for its healing waters – as a result there are over 20 fountains dotted around – 2, it has 12 churches – that’s one per citizen-ish. Don’t worry we didn’t take pictures of them all. 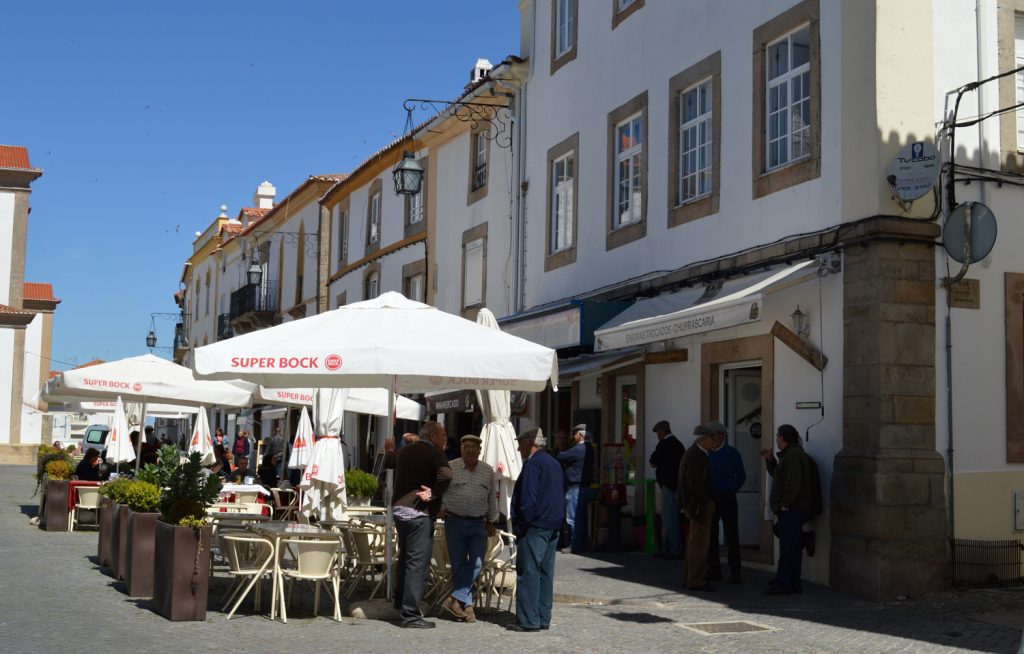 Castelo de Vide like most of the old hill top castle towns is really all about what is inside the wall. We started by going in the large church, which is relatively young being finished in 1837, and is probably the largest church in this area. It was nice inside, not being too ornate but with plenty of character. We also like that its eaves are full of House Martins’ nests, with plenty in the process of being built. From there we continued out and up towards the opposite wall to where we were parked, as would be expected with us this meant a steep hill, up to a mirador then onto the Praca Alta both with spectacular views over the Alentejo countryside in fact we could see the snow covered mountain tops of the Sierra Nevada near Granada in Spain as the stunning backdrop. From there we carried on to the Forte de San Roque a small fort within the walls with what appeared to be a small chapel, which was unfortunately closed. 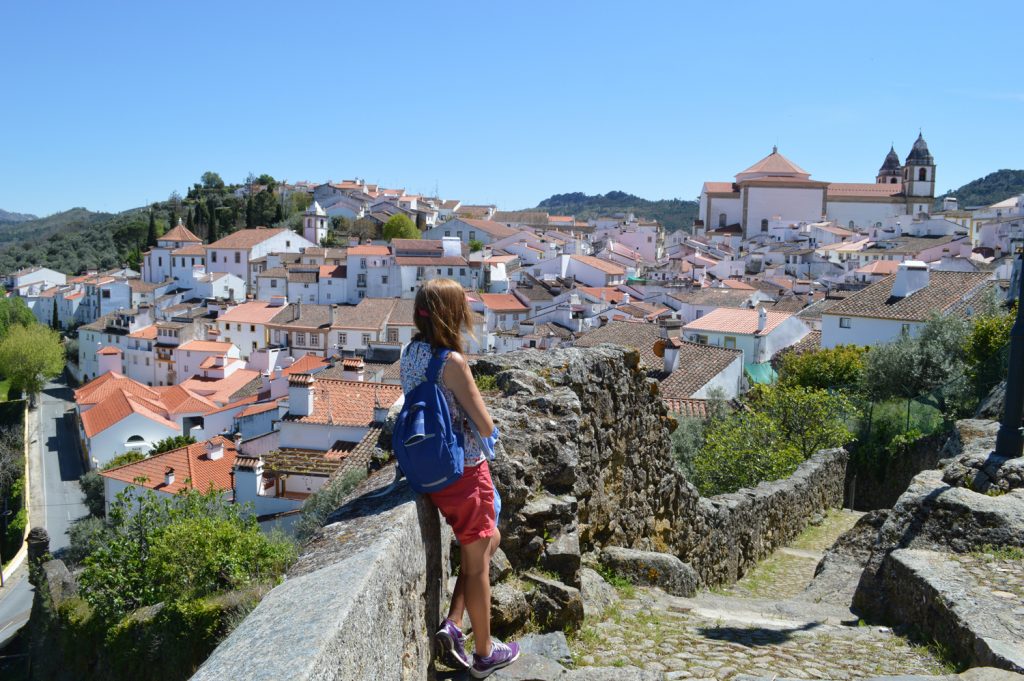 From the forte we walked back through the lovely back streets with its narrow steep little roads heading back down towards the main square. We also marvelled at the fact that as usual there were cars parked in every tiny nook and cranny, where you would struggle to get a pushchair never mind a car. Although this does highlight one of the dangers of car ownership in these little towns, not a scientific fact but probably 50 to 60% have side scrapes and corner dents in them. If ever you consider living in one of these little towns the lesson is buy small and cheap. 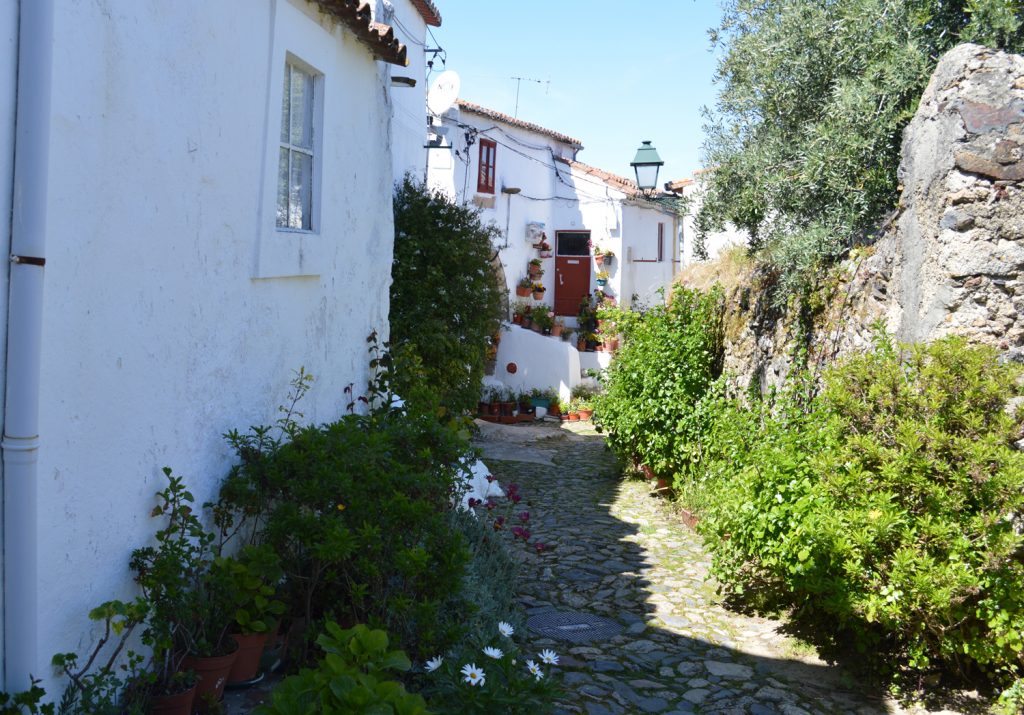 Carrying on we got to the Jewish quarter with its even tinnier alleyways with many of its original features still there including the old Synagogue, now a museum to the Jewish community with a feature on the inquisition. Small but interesting with a few old finds from around the area. This led us onto the Castelo itself perched up above the town, much of it is in ruins with just 2 towers intact due to various reasons not least of which was a gunpowder magazine explosion. What there is is free to explore including going up on the roof of a big hall and the tower, which really does give you gorgeous views around 360degrees. Also one of the nicest features inside the castle walls is the medieval burg the original town packed inside the upper walls, these lovely little houses packed into tiny streets and alleys are full of potted plants and flowers in the midst of which a small church with fully tiled interior. The Nossa Senora da Alegria, unfortunately for us it was locked but peering through the small but dusty windows it looked really unusual and if you can get in do so. 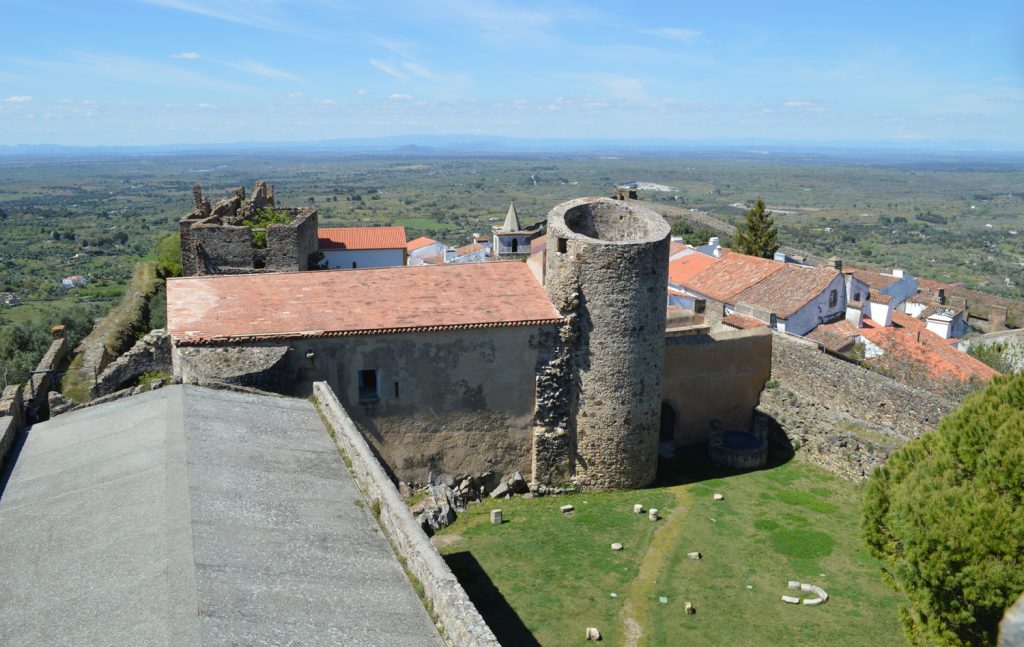 By now it was close to 3pm and a late lunch beckoned so we made our way back into the centre to find a café in the sun before stopping for something light washed down with a nice well earned beer. After which we wandered out a bit further going for a walk in the cool parks before going back to Buzz for a rest and change for the evening. 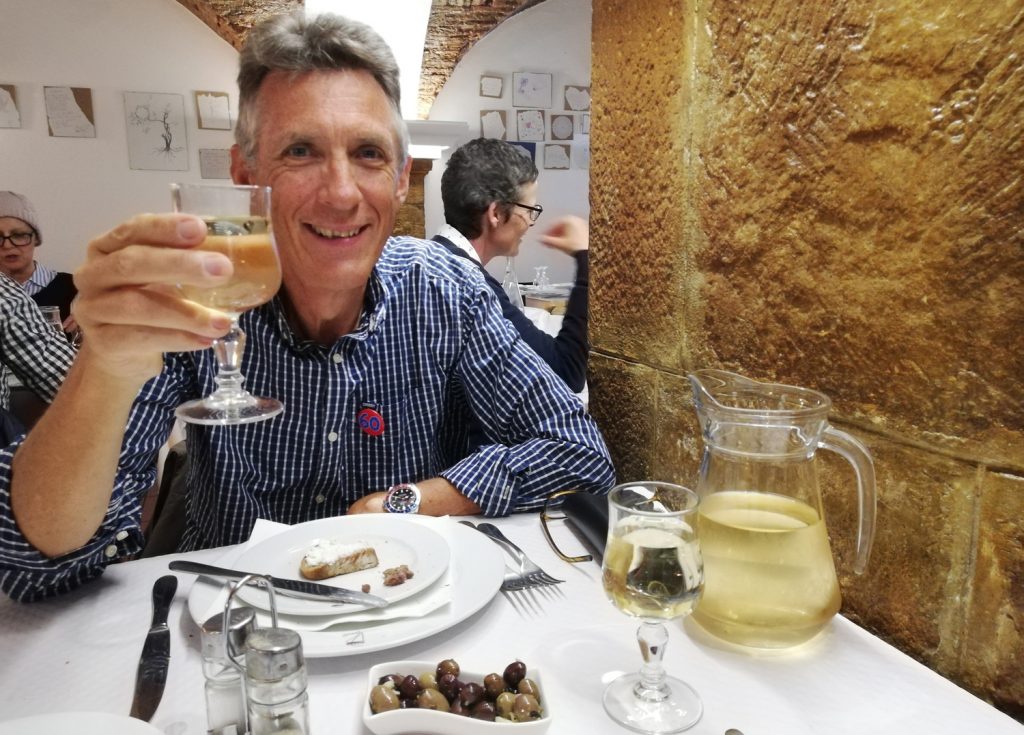 Castelo de Vide is proud of its Jewish and Christian heritage, which has resulted in some unique cultural variations with their Easter festivities   being a blend of Christian and Jewish traditions and while we were there another annual event was in full swing. For 2 weeks the Festival do Sarapatel where local eateries add a range of judia-christian recipes that have developed over time including stews like Sarapatel (spicy pork or lamb stew), Migas de batata (fried bread and potato crumbs) and desserts including Boleima a flat baked slice developed from unleavened bread available in 2 versions plain sugar or apple and cinnamon, something we had hoped to take advantage of after dinner. 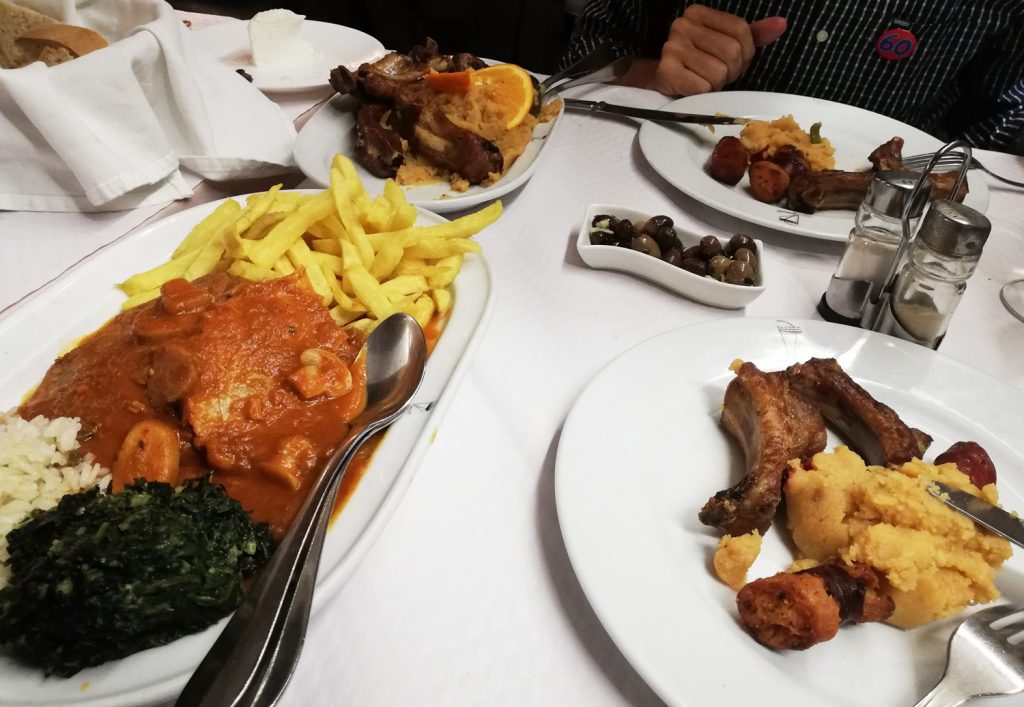 After a short rest and change we walked back into the square found a bar with the last vestige of sunshine and enjoyed a pre-dinner drink, worrying that we had booked dinner too early 8pm, thinking about Spain where they don’t eat until 10pm or later and that we would be the only ones eating. As it was it was fine we were not alone and in fact some of the last to leave. We started with bread, olives and a cold fresh sheep’s cheese that was really refreshing on the bread. Now when we ordered our mains we forgot what Rui the Portuguese man we met and had dinner with in Monsaraz had told us about not needing a main each! With that advice NOT in mind we ordered the Migas with ribs and Chorizo and pork loin with mushroom sauce, wondering why people including the waiting staff were giving us curious looks which may have been the litre of wine we ordered. That is until the Migas turned up with a plateful the ribs and Chorizo to be swiftly followed by the pork dish with about 6 pieces of pork + chips + Rice + Spinach, yes it wasn’t just the wine it was that we had ordered enough food to feed a horse. Not only that but the waiter came over with a bottle of water looked at the wine chuckled to himself and said in broken English “you don’t want water do you”. The food was delicious and we did manage to eat most of it but not pudding that would have been one wafer thin mint too far. After dinner it was back to Buzz to try and sleep off the giant meal, for the next day we had a long walk ahead of us in the hills.