After a relaxing couple days in Riberac we continued our journey armed with a couple of recommendations of places to visit on our last few days as we travelled North towards Calais.   Initially we’d planned to visit Poitiers including a day at the theme park Futuroscope, thinking it would be a fun way to end our French experience.  But when we found out that the tickets would be 80 euros for the two of us, we mulled it over and changed our minds, deciding to save it for another time. 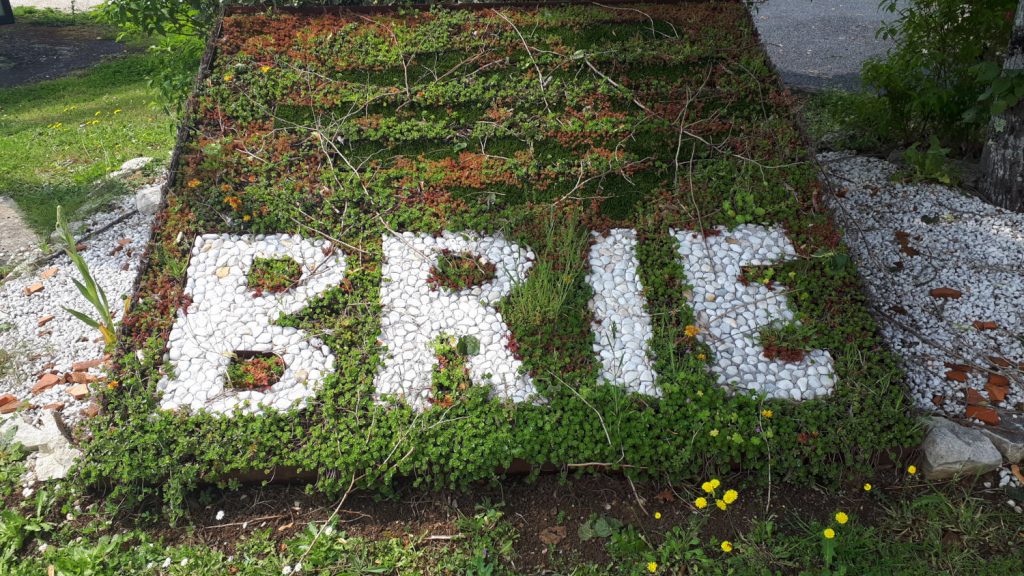 The first suggested place to visit was Chauvigny, about 185km North and a 2.5 hour drive according to Google.  We’ve learnt to add about 15 minutes per hour to the duration of any journey, as being over 3.5 tons we have a lower maximum speed and we don’t take toll roads.  This has never been a problem for us because we enjoy the journey itself, the countryside views on the way and passing through small towns which you don’t see on the motorways.  About an hour into the journey we started seeing signs to Brie.  Not only that, but it was Monday and the next day would be Tuesday, and for us Tuesday = Cheeseday so it seemed the perfect opportunity to make a quick detour to go and buy some brie in Brie! 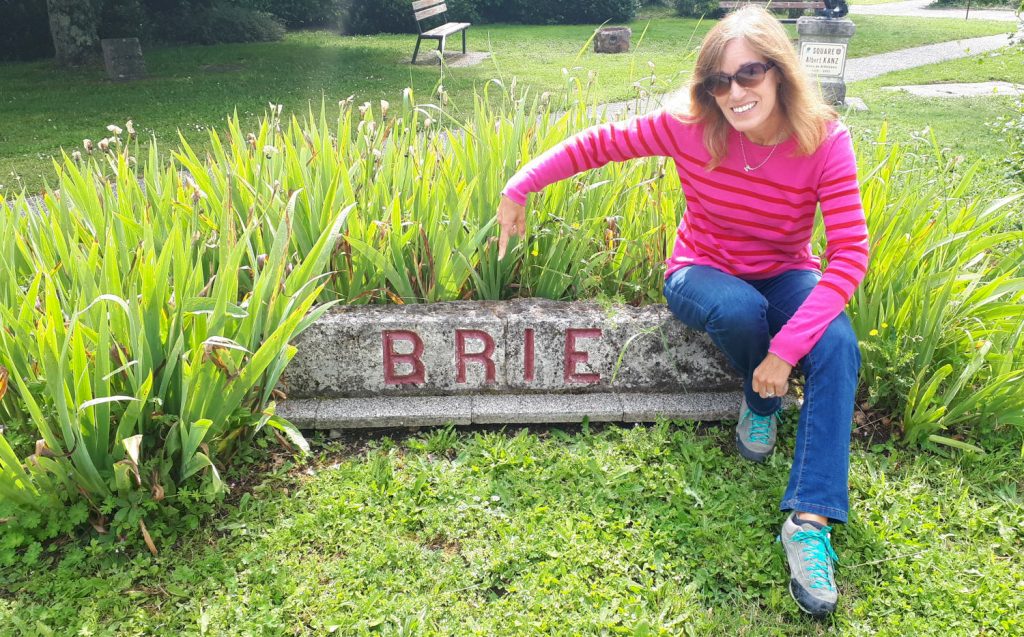 Finding a small car park on the edge of the town we parked up and expectantly set off on foot straight towards what looked like the town centre and some shops.  Keeping our eyes peeled for delis, cheese shops and perhaps even a ‘Fromagerie’ that we could visit and see the cheese making process we found ourselves in a small street with just a supermarket, bakery, pharmacy and smattering of other shops, but not a cheese shop in sight – unBRIElievable!  Having thought it would be a BRIEeze to find a huge choice of BRIE there was not a single wedge.  Even the Spar supermarket didn’t have it. It was almost BRIEyond BRIElief.  We’d already planned our lunch, a nice fresh, warm baguette with crispy bacon, red onion jam and oozing Brie, but no, sadly it was not to be.  Cheese Tuesday would have to be cancelled.  We were later to discover that there are several towns called Brie in France and we had obviously gone to the wrong one. 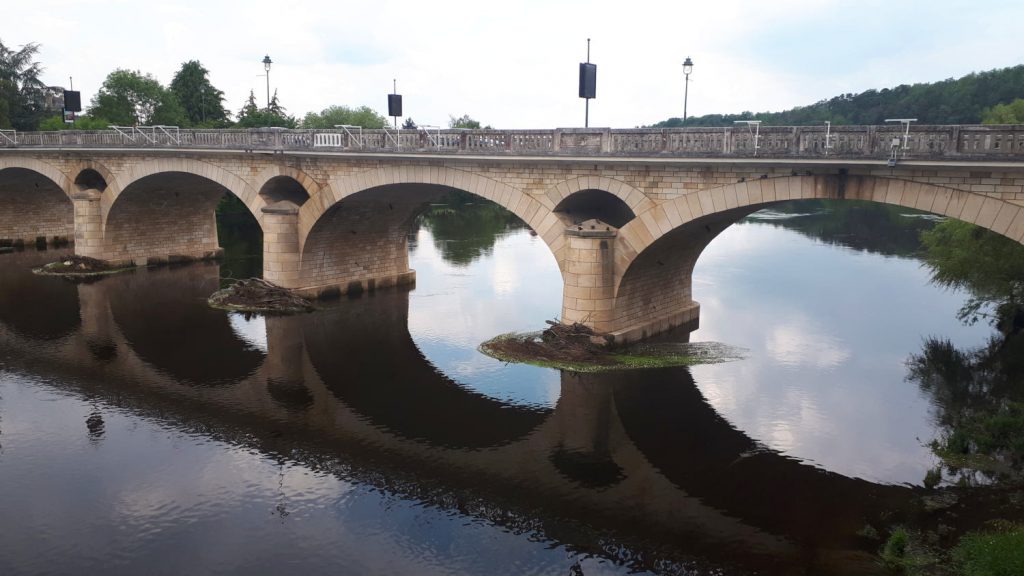 Feeling disappointed but laughing at the absurdity of it, we made our way to the place we were meant to be going all along – Chauvigny.   It’s an attractive medieval town on the banks of the river Vienne with not one, but five castles!  Designated a city of art and a member of the Plus Beaux Détours de France, it has a lot to offer.  It even has a type of stone named after it, Chauvigny stone, a type of limestone, traditionally quarried in the local area.  We parked in the lower town, walking across the picturesque stone bridge to get some views of the riverbank before making our way up into the old quarter.

One of the highlights is an amazing bird of prey show held in the open air in the grounds of the ruined 12th century Baronial Castle. It’s a spectacular show called the Giants of Heaven which is held twice a day in the open amphitheatre.  There are some magnificent and unusual birds taking part including raptors, parrots, owls and storks.  Unfortunately due to the brevity and timing of our visit we were unable to see it although we did get a sneaky look at some of the birds  and aviaries just by the ticket office. 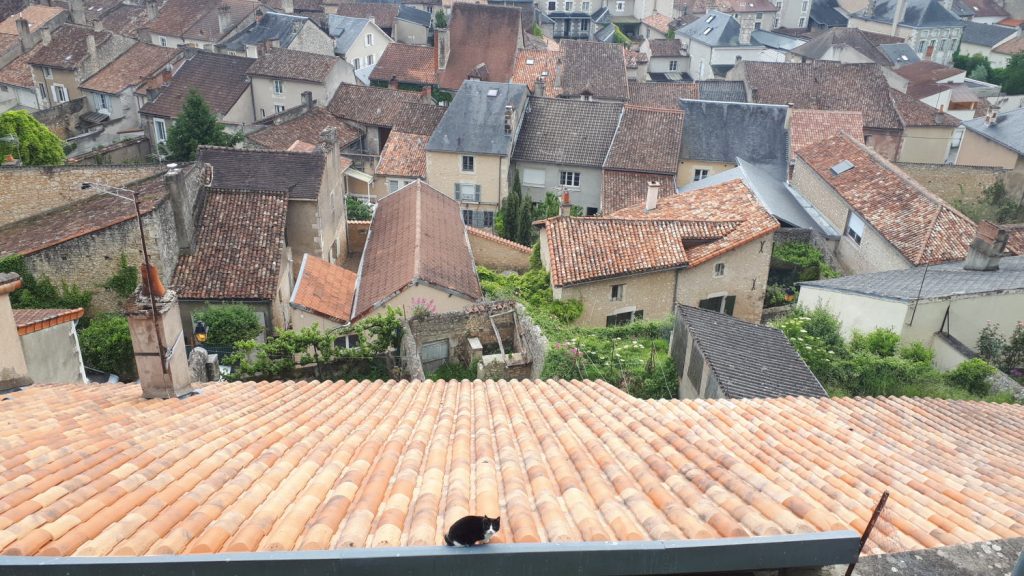 Views over the Chauvigny rooftops with Vienne beyond

In the upper town, the five castles sit along a ridge, with views over the red rooftops and out over the Vienne countryside.  We took a look inside the 12th-century Romanesque collegiate church of Saint-Pierre which was quite unusual with striking painted columns.    The town has a long history of porcelain production and these days throughout the town’s streets, there are small artisan studios and workshops selling and making ceramics, paintings, pottery and sculptures. 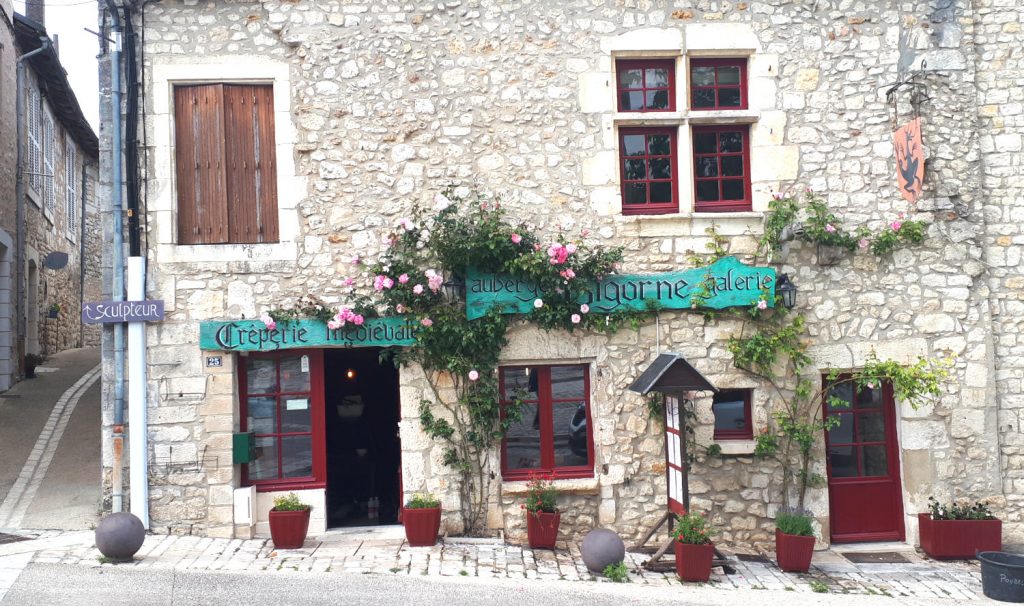 Medieval creperie with alleway leading to a sculptor’s studio

We weren’t intending on spending the night here, needing to move on a bit further but if we had we would have explored another great atrraction, the Velo Rail.   It’s a kind of cycle trail on an old railway track but with a difference. On this track you use a specially designed ‘vehicle’ which is like a cycle cart ideal for families with space for kids to sit while the adults cycle. It’s quite long though, at 17.4km for a round trip that takes about 2 hours and goes across the Vienne taking in a range of environments including dry valleys, hollow paths, undergrowth, then cultivated and wooded plain.  One of the great bonuses of old railway tracks is that they’re never too strenuous or hilly so although long, not difficult.  It’s the kind of thing we would probably have done if we’d had more time – maybe next time.  For now though it was time to move on.