The Biggest Wine Festival in the World – Bad Dürkheim

The Biggest Wine Festival in the World – Bad Dürkheim

The beginning of the Deutsche Weinstrasse (or German Wine Route) begins at the spa town of Bad Dürkheim in the Rhineland-Palatinate region of Western Germany.  While we weren’t intending on following the wine route, we did want to visit the town for a very good reason.  It was a stroke of luck that we just happened to be in time to visit for the last couple of days of the biggest wine festival in the world for which the town is famous.

We arrived at around 5pm and the motorhome parking area which is supposed to hold 170 motorhomes was completely rammed with cars and had just 1 row at the back for motorhomes and it was totally full.  The roads leading to and from the town were also lined with cars parked up along the grass verges and it seemed there was nowhere to park.  A bit further along though, we found a space alongside a vineyard, slotted ourselves in and sat it out for a while having a coffee before walking back to town to get a better look at the parking on offer.  We found out there was actually just one space left which had been hidden from the road, so we hotfooted it back to Buzz and drove over as quickly as we could hoping it would still be available when we got there. Thankfully it was. 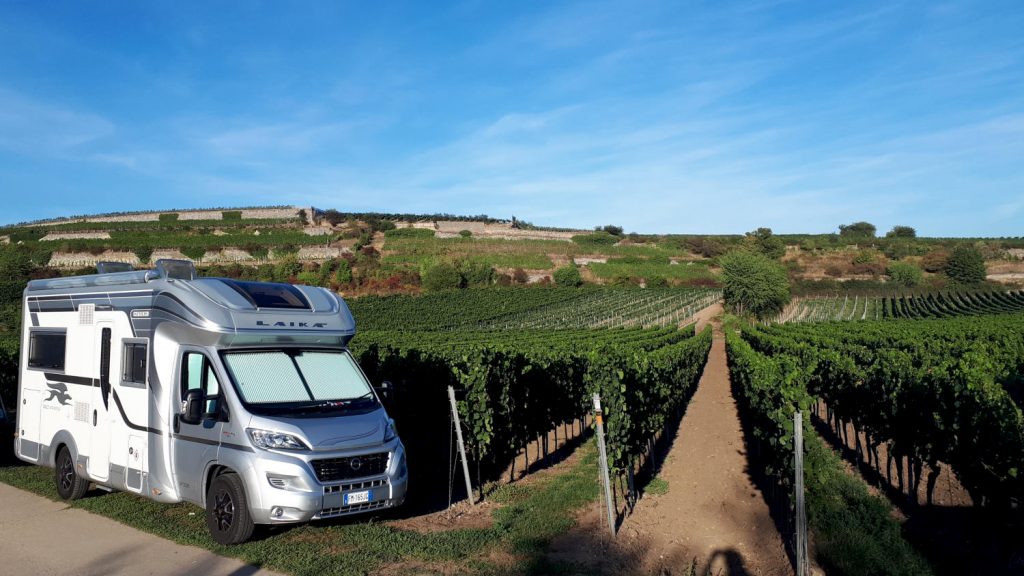 We had a quick shower and change for the evening and set off, walking the 10 minutes further to the entrance to what looked more like a fairground than a wine festival.  We could hear the screams of the brave souls on a terrifying pendulum style ride as we walked towards it and wondered about the mix of wine, beer, food and upside down, gut-wrenching rides – maybe not something we would try too hard to find out! The party atmosphere was evident all around and we instantly felt a sense of fun. We hadn’t had a night out like this in a while. 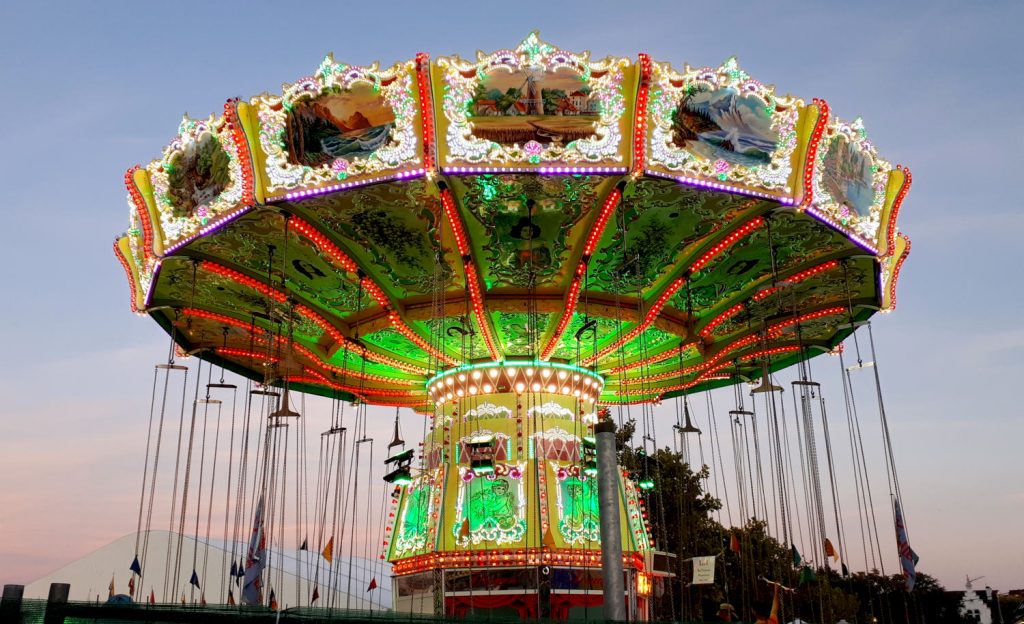 The colourful carousel at the entrance to the festival

The event is held yearly and has done, in some form, for the last 600 years.  Initially set up as a farmer’s market selling produce and wine, it developed and evolved into the huge event it is today, visited by a whopping 685,000 visitors in a year at the last count.   It’s actually called Wurstmarket, or ‘sausage market’ due to the large amount of sausages sold, but actually it’s all about celebrating the wine and the sausages are secondary.  The huge amount of visitors means there is a lively, vibrant buzz and party atmosphere, specially since it also hosts a number of huge, scary, toe-curling, scream-inducing fairground rides, boozy beer halls, food stands lit up in lights and that’s before we even get to the wine. 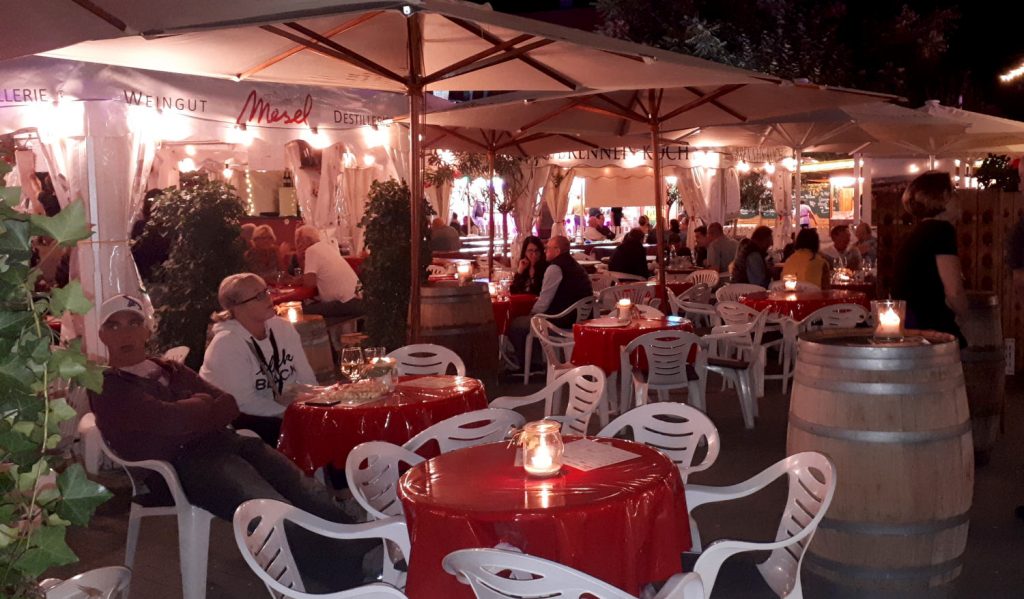 Talking of wine, there are over 300 varieties on offer from the finest dry Rieslings (our favourite) to roses, sweet dessert wines and Sekt or sparkling varieties.  You can choose to drink a standard glass from a wine glass or get a tumbler full, watered down with soda if you intend to drink vast quantities, which many people quite obviously did!  The event takes place every year on the 2nd and 3rd weekends in September over 4 days and starts with a grand parade and opening by the town Major.  The last night is celebrated with a fantastic firework display. 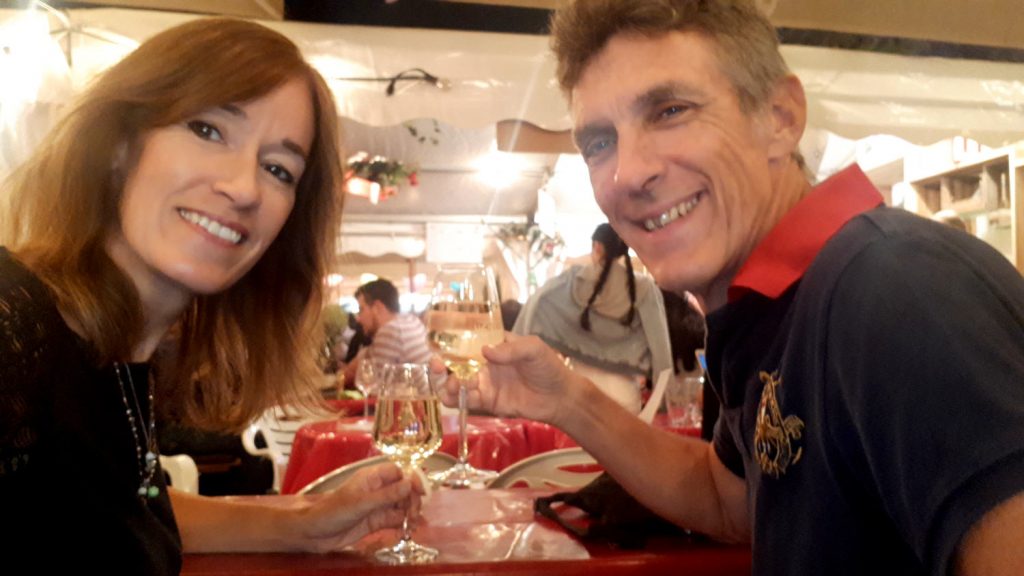 There were so many places to get a drink, the choice was overwhelming but we settled for a cosy looking seating area, settled down to a Riesling and watched the revellers as we drank. Walking around looking at the food stalls not only left us drooling, it left us laughing.  There are sausages galore to choose from including Bratwurst, Currywurst, Rostbratwurst, Feuerwurst and Rindswurst. There were also other strange, mind-boggling offerings available such as Kartofelpuffer, Kaseknacker, Knobistangerl and Fleischpies. 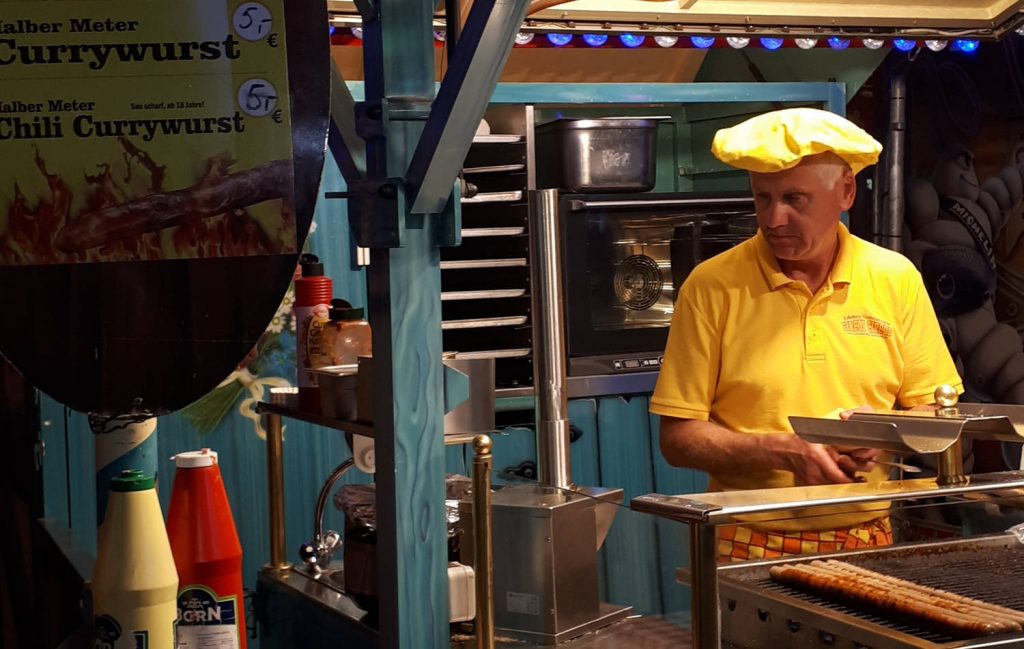 Whatever type of Wurst you want, you can probably find it!

Where to start?    Well as it happens, we started with dessert!  No surprises there.  We were drawn in by the sheer irresistible aroma of freshly cooked dough in the form of Chimney Cake, being made to order right in front of our eyes.  It’s a very simple concept but sometimes the simple things are the best.  A soft yeasted dough is rolled out and cut into strips before being wrapped around a wooden mould, dusted in sugar and baked in a special oven before being doused in a sticky glaze and dipped in a variety of flavoured and textured toppings.  We opted for the Bounty coating, chocolate and coconut, and it was simple perfection! 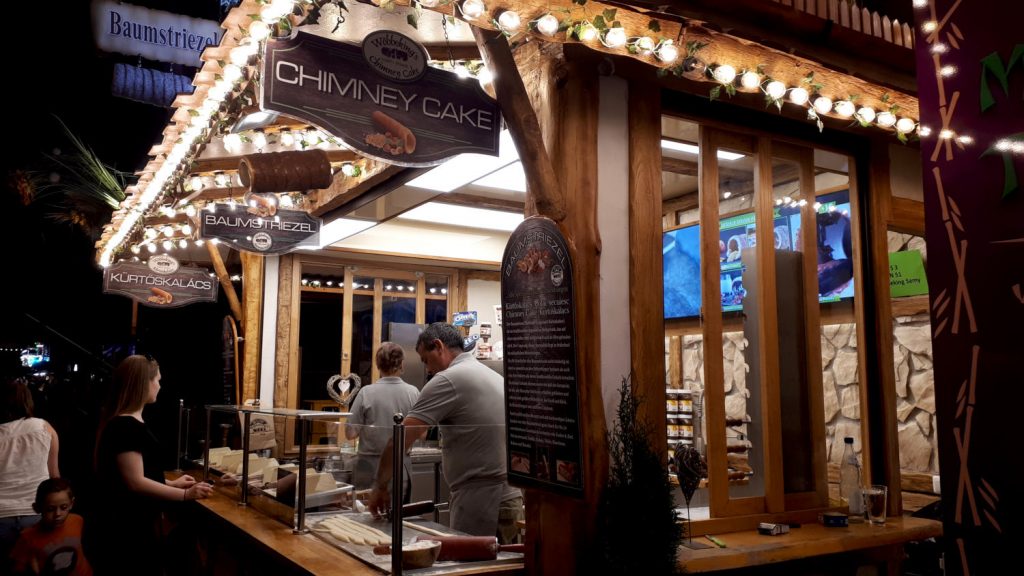 The Chimney Cake Stand – just too good to resist

Bad Dürkheim is also famous for something else – the biggest wooden barrel in the world with a 13.5m diameter.  It was made in 1934 by Fritz Keller, a vintner and barrel maker.  Using 40 metre planks from 200 spruce trees sourced from the Black Forest he created a barrel big enough to, in theory, hold 1.7m litres of liquid!  It has never actually been used for this though and instead has a restaurant and bar inside with a terrace outside, in total capable of holding 430 people on two levels. 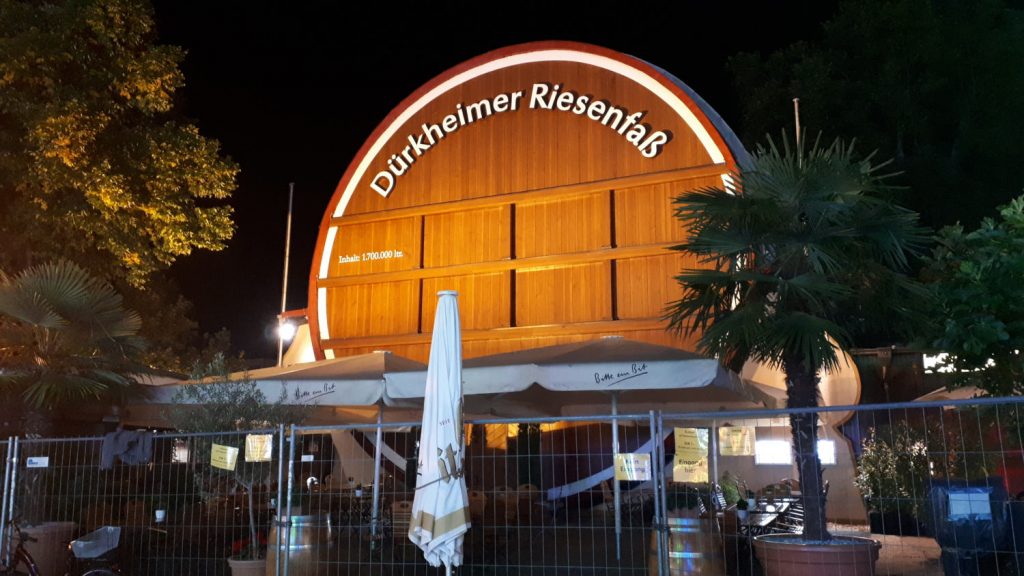 The whole place was alive and buzzing, with chatter, music, screams and laughter.  In the big central beer hall (packed with people much younger than us!) party people were dancing on the tables and benches, some of them falling off right in front us, some dressed up in lederhosen, some not, but all having an absolute ball.  The feeling was quite infectious, but we both felt this is really a place to come to with a group to really feel a part of it.  When there’s just the two of you it feels a bit ‘Billy no mates’.  We did have a great evening though and with just a short walk to get back to the motorhome afterwards it was ideal. 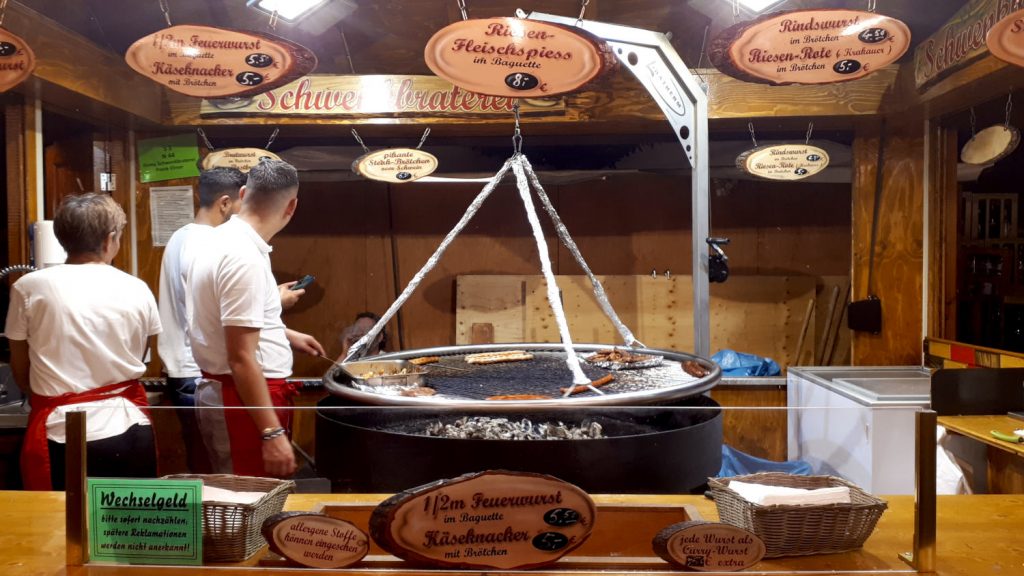 The next morning we walked back in and it was a very different story.  All was quiet, the food stalls were mostly all shut up except for cleaning, there weren’t many people about and the fairground was shut down.  We did find one stand open though, the Dampfnudel stand. I’d seen these made on the Great British Bake Off last year and really wanted to try one.  They were very strange, like huge balls of steamed dough with a browned, slightly salty base, served up alongside a glass of vanilla dipping sauce. Like I said, very strange, but actually strangely nice! 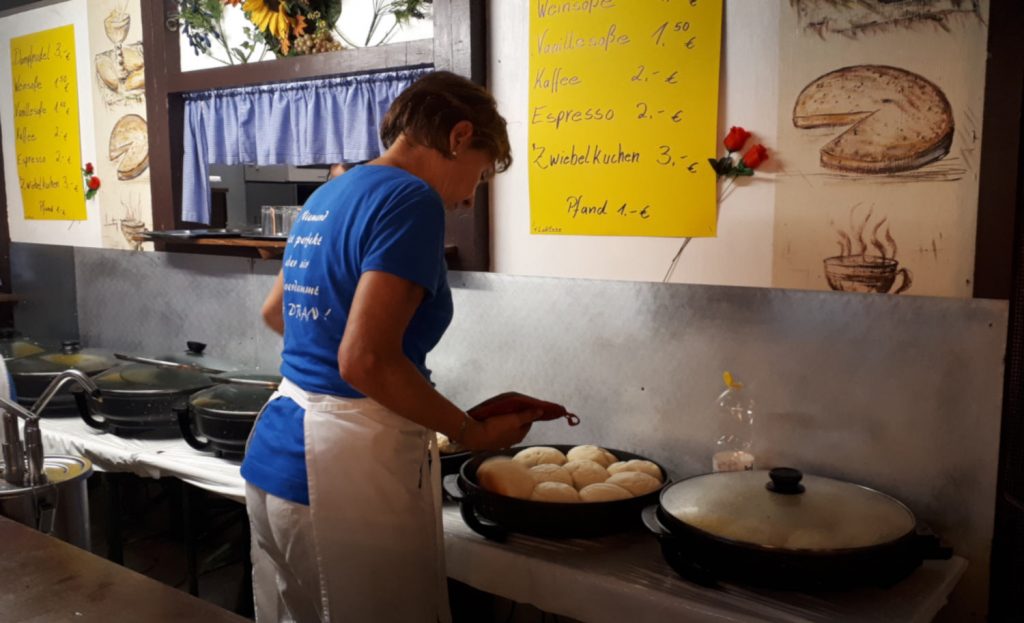 Dampfnudel being steamed in big pots