On our last day before Calais we were feeling a mixture of emotions. Excitement in one way at going home, seeing everyone, spending time in our house etc. But at the same time we were apprehensive about how we would feel, what it would be like and whether we would come back down to earth with a thump.  There weren’t any answers to these thoughts but one thing we knew was that we weren’t going to be sad and were going to make sure we enjoyed every last minute  of what has been an incredible year.  Our destination for the day was Vendome, a really attractive town on the river Loir in the department of Loir-et-Cher. We’d briefly passed through earlier in the year for a night stop but hadn’t stopped to explore. 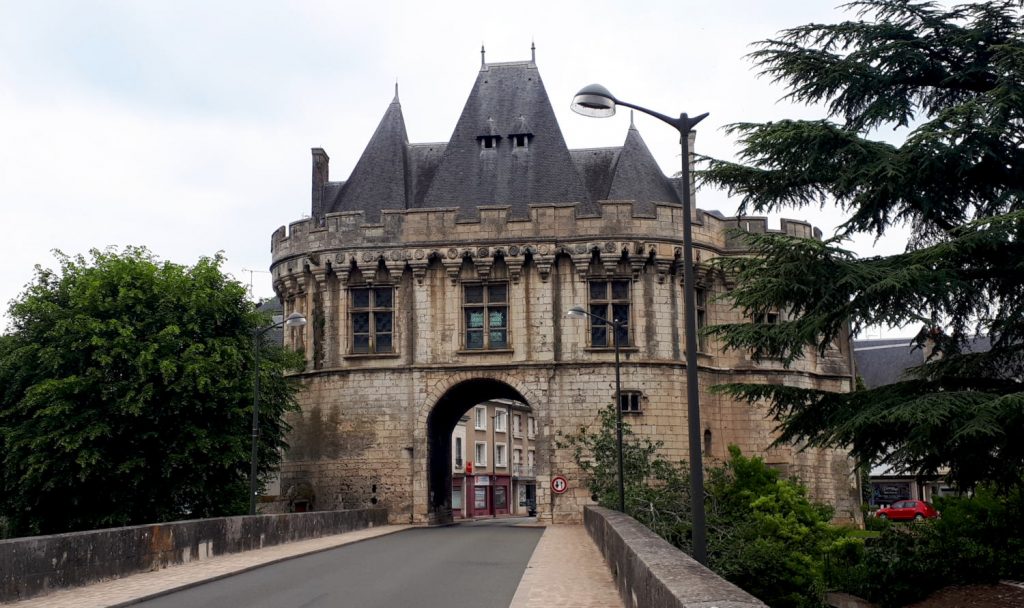 There is a campsite in Vendome and there used to be an aire, which is still in the All The Aires book, but now closed and we were racking our brains trying to remembered where we had parked.  We eventually found it, after a look on Google satellite view – a car park next to a park area alongside one of the arms of the river and just a couple of minutes walk to the centre of town. 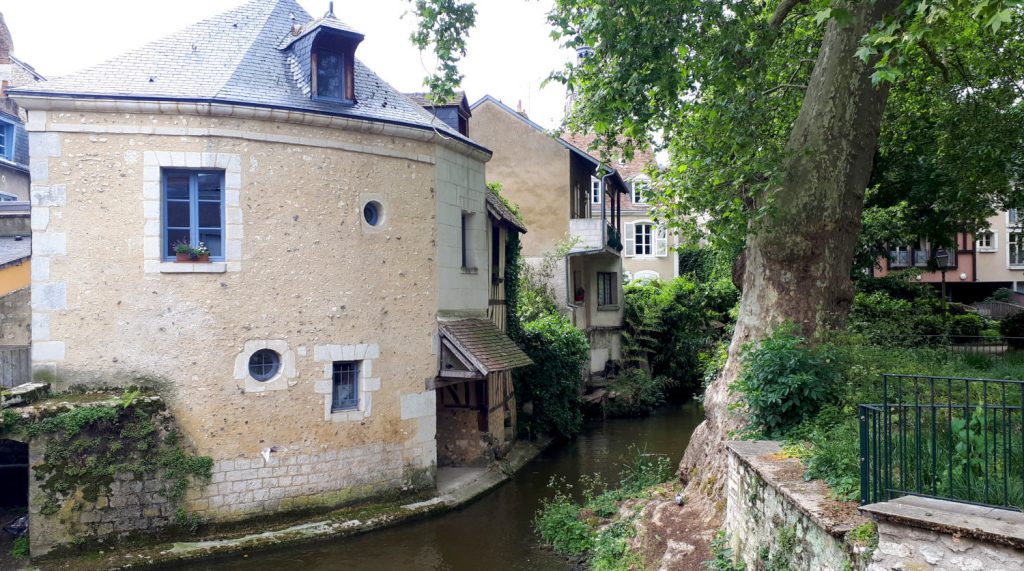 The sky was a bit grey when we arrived and although it was a bit dull it didn’t stop us appreciating the distinct French character of the town, the picturesque riverside areas and the the half-timbered buildings dotted around here and there.  The Loir river divides into several arms which snake through the town creating lots of pleasant walks along the water with multiple bridges. 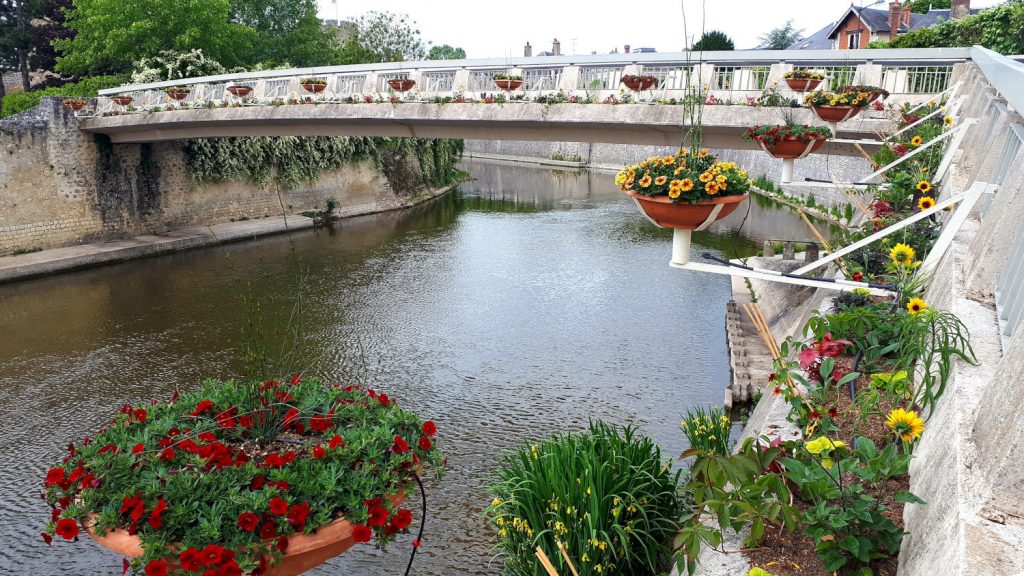 One of Vendome’s many bridges decorated with colourful flower baskets

There happened to be quite an extensive market on throughout the streets with food, flowers and a smattering of clothing on offer.  Our cheese radar was on high alert as we walked through the food stalls and we honed in on a particular stand where tasters were being offered.  Two huge stacks of Brebis cheese were sat on the counter and we given wisp thin slices of each, followed by a huge cheesy grin and question as to whether we would like to buy.  ‘Why not?’, we said at he tried to cut off a huge wedge.  We said, ‘no, half that size’ and thank goodness we did, as the small slice we bought cost a staggering 13 euros!  Maybe it had a gold-plated rind ….. 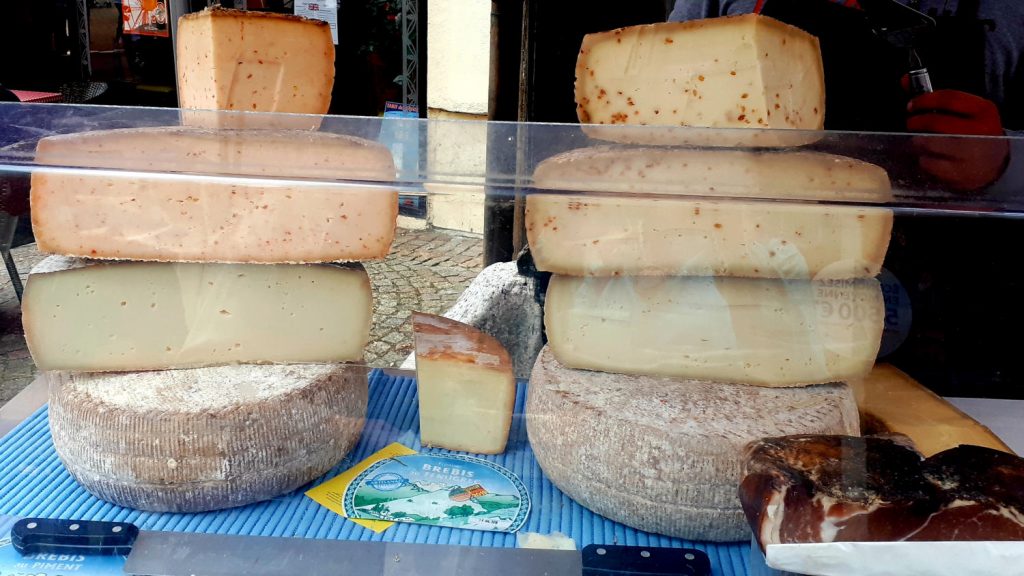 The world’s most expensive cheese?

Vendome has a feudal castle high on the hill at the back of the town, so while it was dry (rain was on the cards) we made our way up there hoping to get a good view back down.  There’s not much of the castle left but the 6 hectare grounds were lovely and the outlook over the town was worth the walk up. 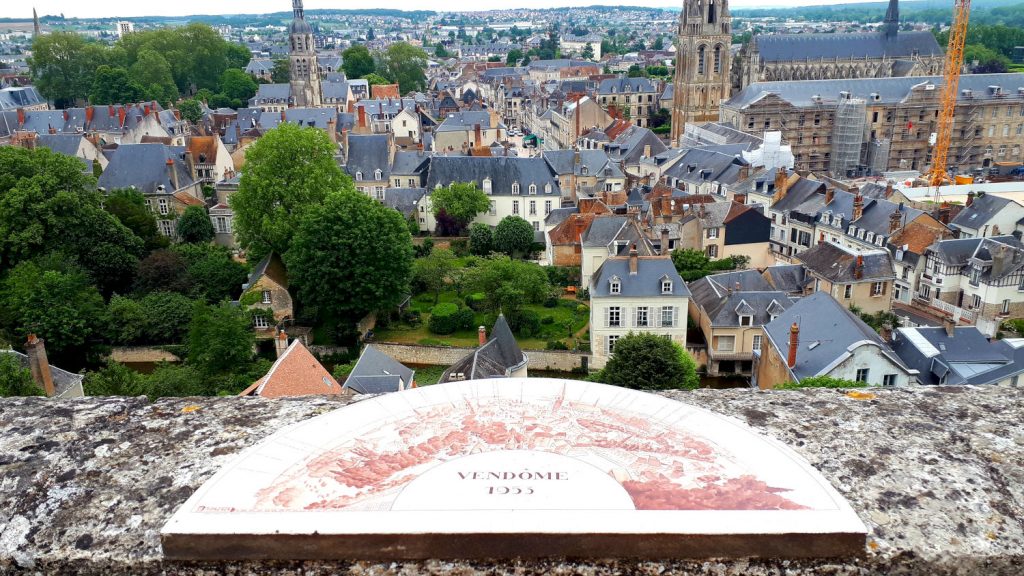 View over Vendome from the castle

We saw what we thought was a telescope and although thought it would be broken – they usually are. We were wrong on both counts though, it was actually a ‘timescope’.  We were quite surprised when we peered in and saw an interactive screen with various options to choose. One option is a 3d image of the town and as you move the scope around, the area you are looking at is shown on the screen. The second option is a moving film of the general area and its atrractions.

Peering through the Vendome timescope

Back down in the town we had a cup of coffee in a cafe, enjoying a bit of Bowie and watching the world go by before going on a hunt for a barber.  So far in Europe Julian’s haircuts have been a lengthy, meticulous experience but this one was different.  A quick ‘zip’ along the scalp with the clippers and a nifty side parting smarmed into place and he was done! 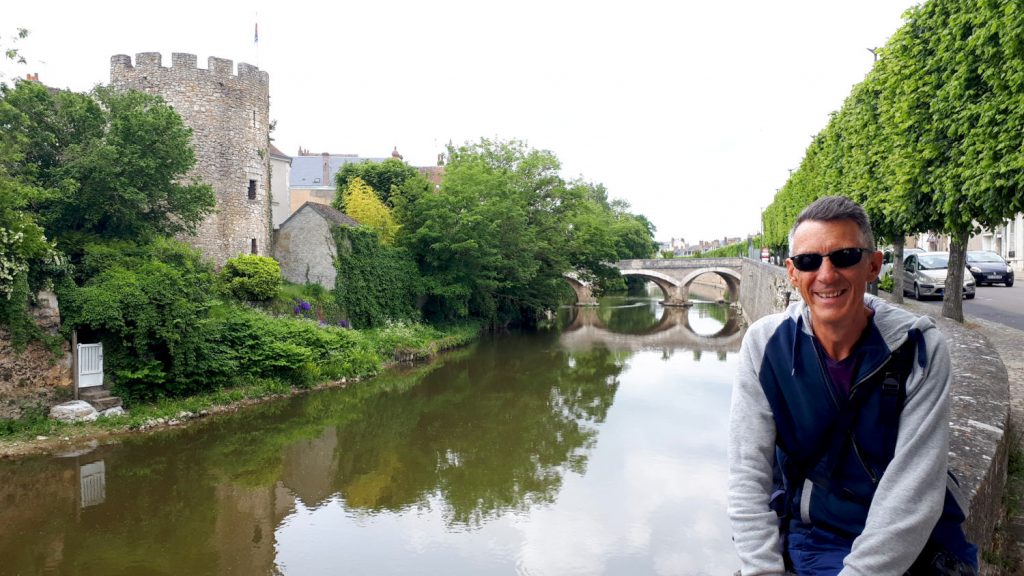