A dark day in Dachau

A dark day in Dachau

Being only an hour away from Dachau we decided to take a detour off our route to visit the Concentration Camp Memorial site. This is not the sort of place anyone exactly wants to go, more that you feel you should.   Driving into the town seemed quite surreal in the sense that normal life was going on all around, with houses, flats, schools and kindergartens in the direct vicinity of the old camp.   It almost felt that there should be a more respectable perimeter to give it space, to somehow keep it separate.  When we arrived at our parking place the sun was shining but it was after 4pm and the site was due to close at 5pm so there wasn’t enough time for a visit.  We took a walk along to it anyway just to get our bearings and we spent time reading the information boards leading up to the entrance. 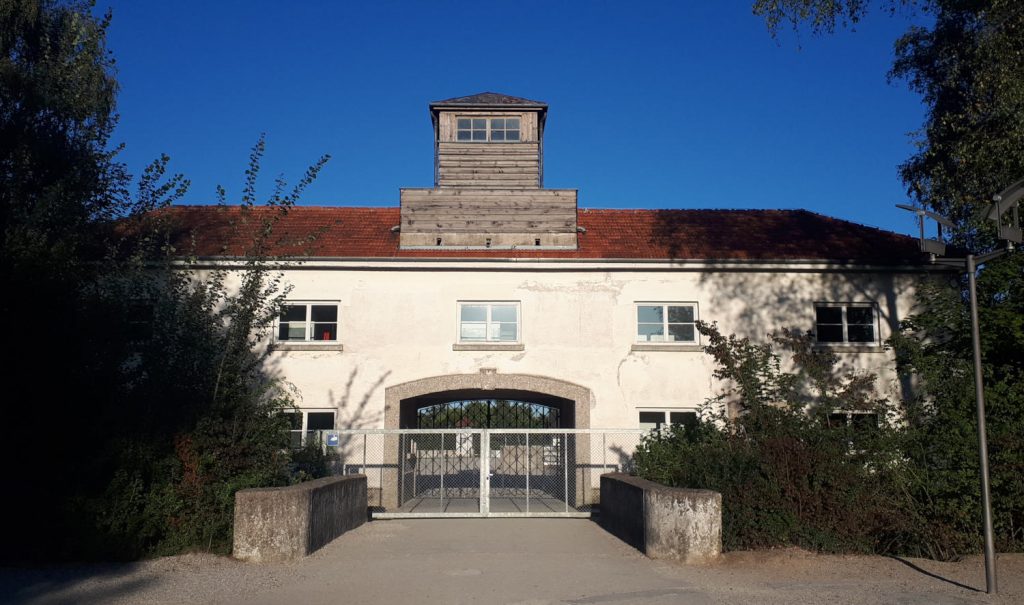 The Jourhaus which acted as the main exit and entrance to the prisoners’ camp and as the main office of the camp SS personnel.

The next morning the sky had turned a miserable grey which somehow seemed much more appropriate for our visit. It doesn’t feel like the sun should ever shine on a place as grim as this.  We walked the 10 minutes to the camp with some trepidation. We weren’t sure how we would feel and how awful it would be. 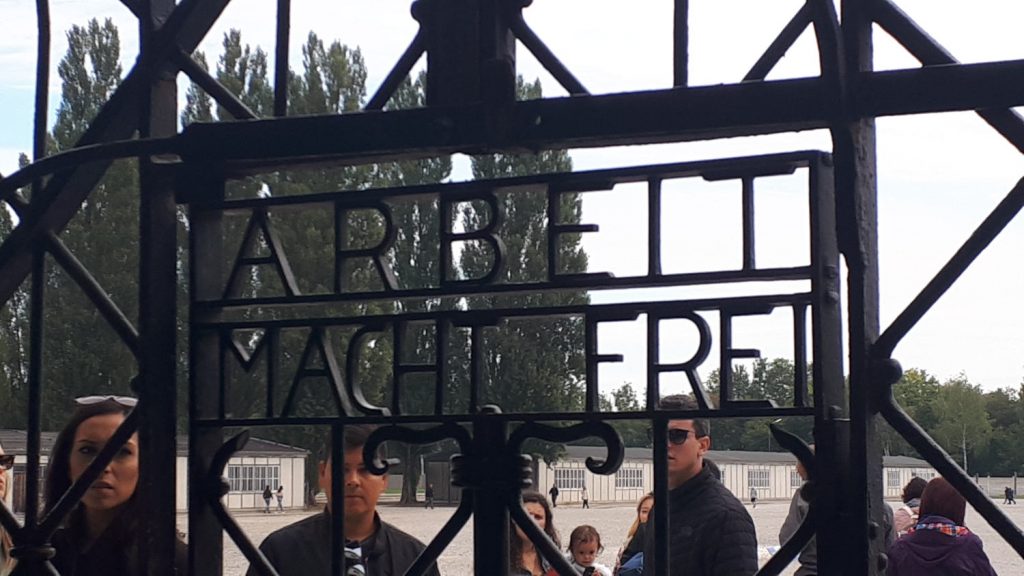 The first thing you see when you go under the archway of the main gateway are the metal gates. These are actually a replica with the original being on display inside but they look exactly the same and read ‘Arbeit macht frei’ – ‘work sets you free’.  This was the ploy used when the camp was first set up and it claimed to be for educational and training purposes whereas the horrific reality couldn’t be further from the truth.  Soon after entering through these gates, each person underwent an ‘admissions procedure’ which involved them being stripped and shaved for ultimate humiliation.  They were then ‘disinfected’ and issued their prison clothing. 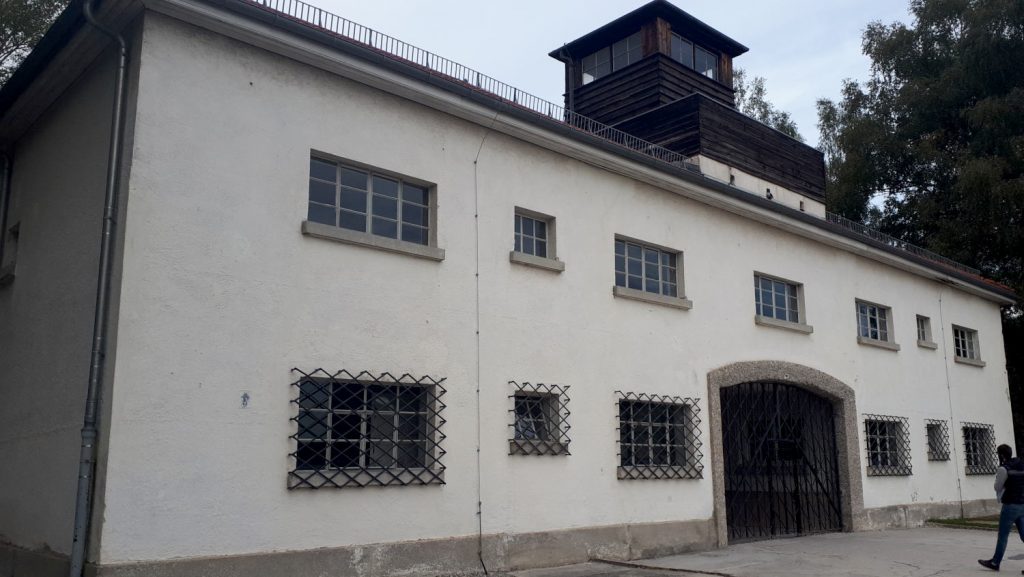 The entrance/exit gateway building from inside the grounds

The site was the first of the Nazi concentration camps and was opened in March 1933, initially for political prisoners. It became the prototype for all camps thereafter.  Originally intended to ‘house’ 6,000 people it ended up crammed with 32,000 kept in the most hideous, inhumane conditions imaginable. In fact we can’t even begin to really imagine the daily terror, agonising torture, virtual and sometimes actual starvation, isolation and hard enforced labour they had to endure, some for up to 12 years. Many prisoners were also subjected to terrifying medical experimentation resulting in painful side effects and even death. 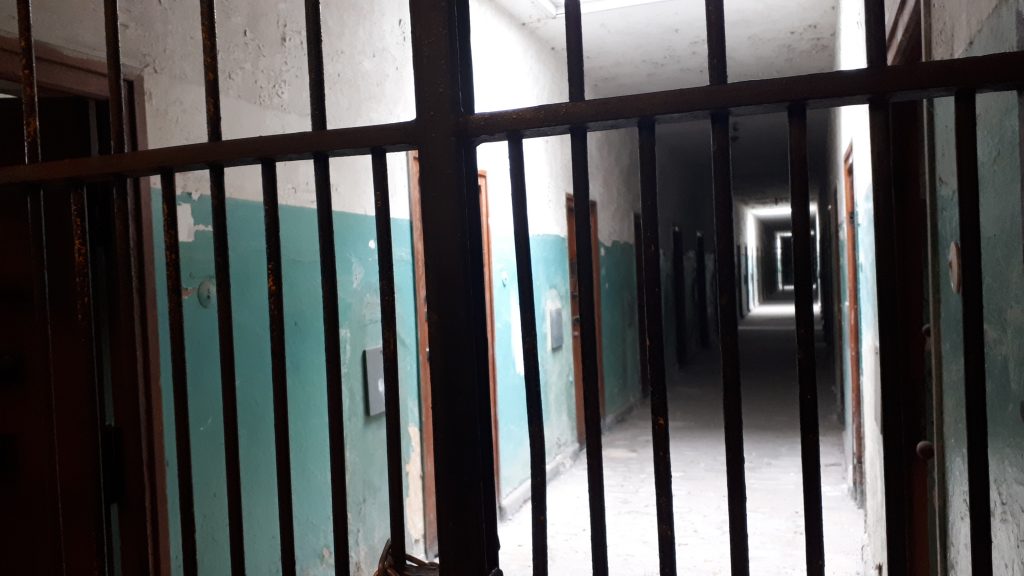 Iron bars in one of the many long corridors

In 1935 a new influx of prisoners arrived at the camp including Jehova’s Witnesses, homosexuals and emmigrants. Over the following years they were joined by German and Austrian Jews, hundreds of Sinti and Roma and 13,00 from Poland.

We saw the barracks where bunks were stacked 3 high. Those on display are replicas.  Beds had to be made to perfection. The slightest crease, incorrect corner, or indent would result in harsh punishment depending on the mood of the guards.  Often the bedding of the entire room was thrown out into the yard and had to be replaced to exacting standards within an hour. 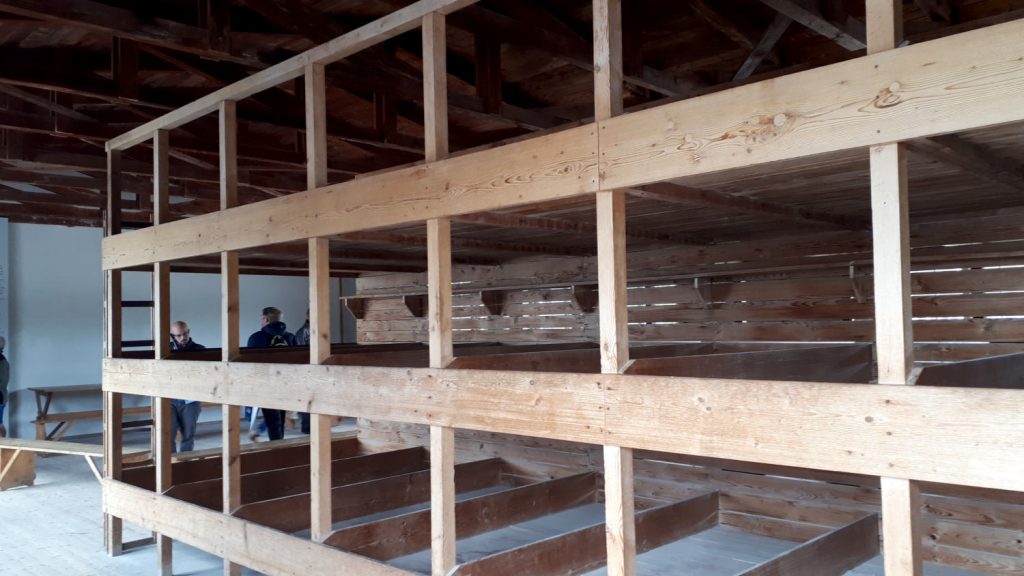 The washrooms within the barracks were woefully inadequate, with just a couple of round basins where dozens at a time were expected to wash in a matter of minutes, with hundreds using the room every day.  The large communal shower rooms were particularly disturbing.   You can still see the remnants of the large metal hooks in the wall where many where hung by their chained wrists, arms bent up awkwardly behind them while being swung and beaten. 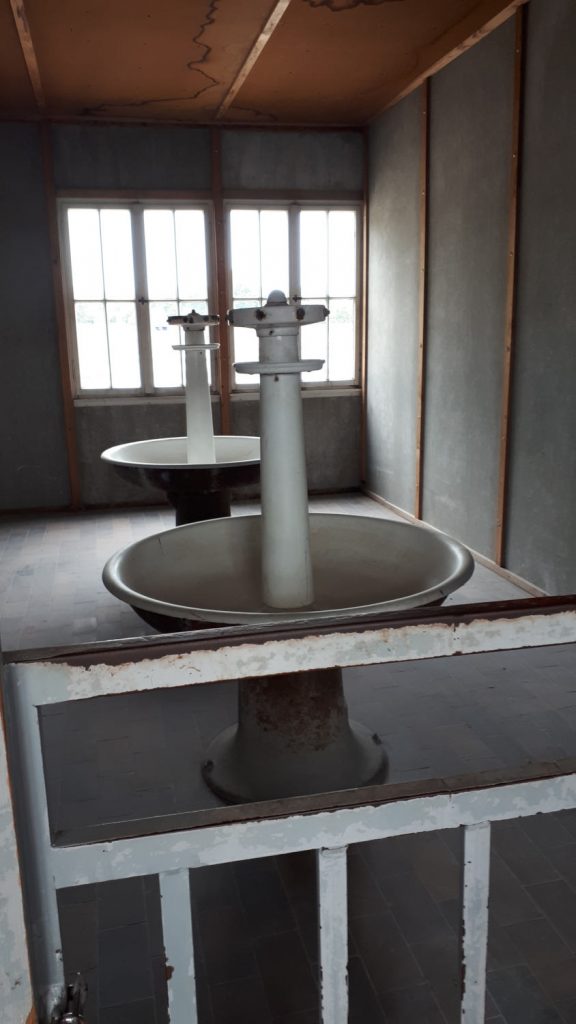 Two washbasins where hundreds were expected to wash within minutes

Outside in the Roll Call square prisoners were forced to stand completely still for hours a day, morning and evening, while they were counted.  The square is so vast it could hold 40 to 50,000 at a time. Often it would be for much longer no matter what the weather – scorching hot, freezing cold, pouring with rain or snowing.  Many would not survive this task and would collapse, perhaps die in the space where they stood.  They were prohibited from helping each other and would themselves receive harsh treatment if they dared.  Move an inch, flinch, look in the wrong direction and you would be sorry. 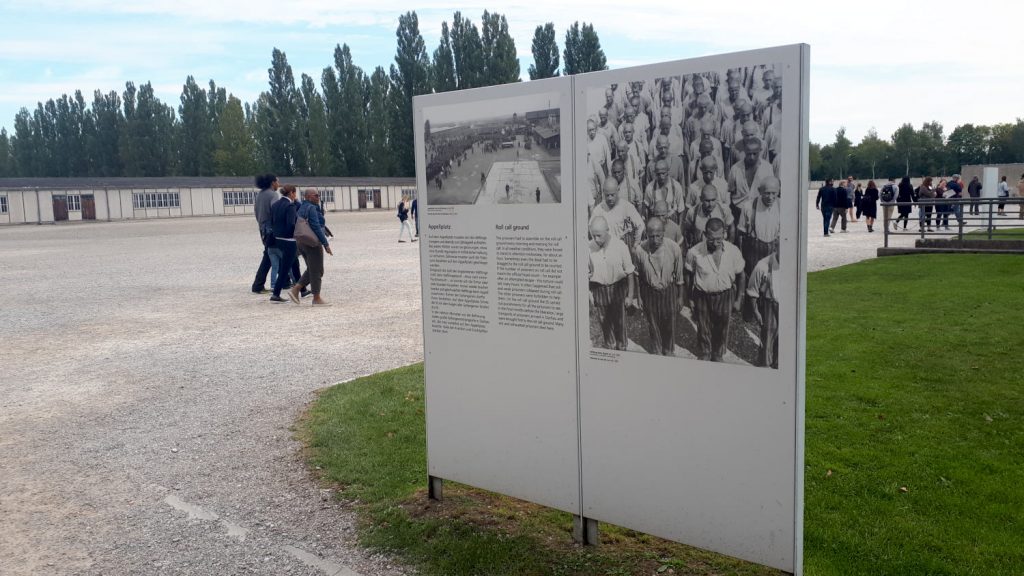 The roll call ground and information board

We saw where prisoners were led into gas chambers disguised as ‘shower rooms’, going through a serious of rooms designed to lure them in.  In the last room the bodies were piled up ready to cremate.  In the crematorium bodies were burned 2 or 3 at a time. There were many other shocking sights, photographs and huge amounts of information on large boards throughout the buildings.

In all 200,000 prisoners from all over Europe passes through this camp, 41,5000 of them being murdered in the process.  The camp was liberated in 1945 by American forces.

If you’d like to read more you can visit the official site here – http://www.kz-gedenkstaette-dachau.de/

This is one place we definitely won’t be forgetting in a hurry.