After our exploits with hams and hairpin bends we set Buzz in a course for the coast and Almeria, another completely new destination for both of us. Almeria is still relatively new to the tourist scene and at first glance a nice city but before exploring we had one chore that desperately needed dealing with, laundry!! So armed with thermal mugs of coffee and a piece of fig bread we made a dash to a lavomat and stuck the washing on, first of all sitting out in the sun until that became just too hot. Once done we sat in Buzz having lunch looking for a parking spot while planning our next move. We found and made for the perfect place (in terms of position but not looks) along the front at the northern  end of the city a designated motorhome area in a  giant car park right by the seafront.

Almeria – Buzz at the motorhome park

Parked up with a whole wardrobe of freshly laundered clothes to choose from we unhitched the bikes and headed off along the cycle lane on the beach front . There’s a wide, esplanade along the length of the beach which is perfect for cycling.  Dotted with palm trees, cafes, restaurants and a variety of fountains and sculptures it’s a very pleasant part of the town and with the sun shining down on us a very enjoyable ride.

We were aiming for a famous old tapas bar El Quinto Toro.  Now with such modern aids like smart phones and google maps you would think it would be easy wouldn’t you? Well no it wasn’t especially when you’re on a bike and have to put the phone in a bag.  Sending us on a wild goose chase, she missed turns, took us too far, the wrong way, and on and on it went in a saga of epic proportions! We eventually got to the bar just in time for one drink and free tapas 30 minutes before they closed, not exactly the lunch we had intended. Just to complete our misery the place was rammed and we had to squeeze into a tiny space at the bar and could hardly move to eat our food. However we did actually get to choose our tapa. First we chose the classic Albondigas (meatballs), the second being Higaditos de Pollo, which we wouldn’t have ordered if we’d realised they were chicken livers, but actually both were delicious if a little small to fulfil the role of our lunch but big enough to stave off starvation at least. 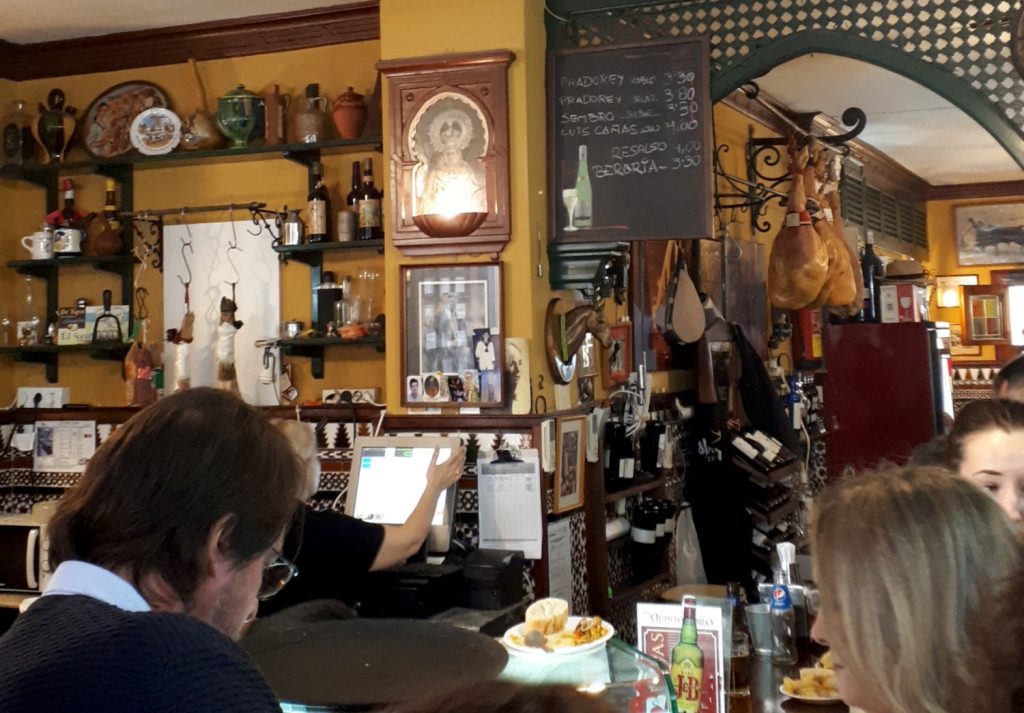 As we were not far from the Alcazabar de Almeria we decided to go there via the Cathedral before looking for something else to eat.   The cathedral is quite unique, being a dual purpose building of worship but also as a fortress, built in the 16th century to protect the city from Berber pirate attacks.   It’s set in an attractive, pedestrianised large open plaza with quite a tropical feel, flanked by tall palm trees. 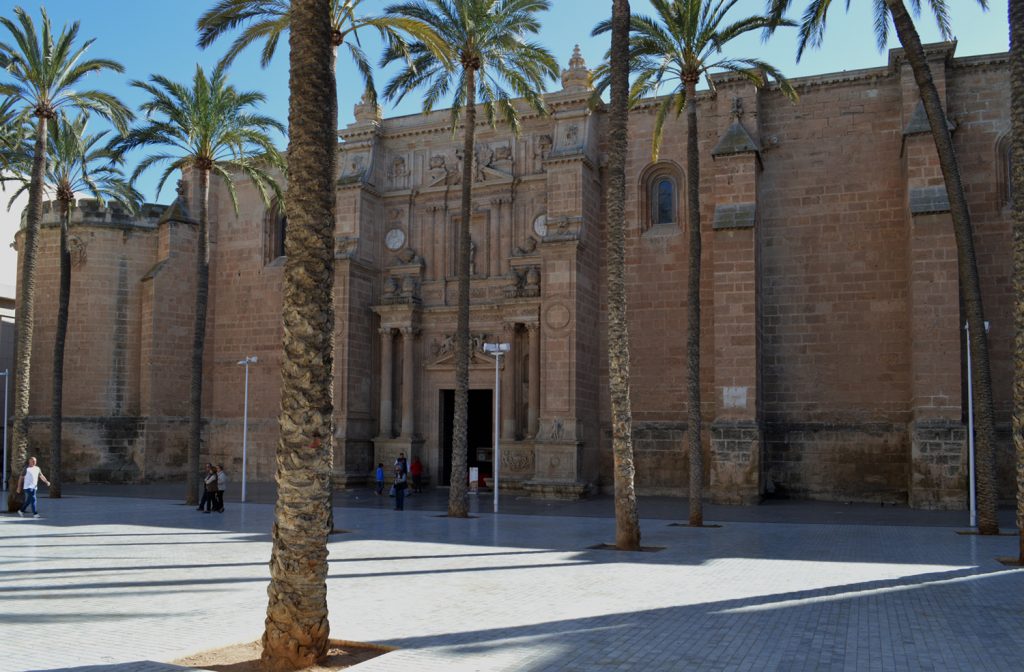 The Moorish Alcazabar, the second largest in Spain after the Alhambra in Granada sits high up on the southern end  part of the city but is much smaller than the Alhambra. This is the old part of the town and the streets here had a very different look to them, with darker paintwork, black balustrades and narrower, hilly streets. Approaching the ticket office we were informed that entry was free due to restoration works going on inside, the castle is an impressive size (Alhambra comparison aside) but in a far worse state of repair. Much has and is being done to restore it and it was an enjoyable hours walk around, with a few of the actual buildings still intact ( mostly the later Christian additions) with some nice views across the city and coast. Our only complaint with the restoration work is as is often the case that it is too clinical leaving little authenticity to the original ruins.  It seemed to be a popular place for holy communion photos though. We saw several children all dressed up in their finery having their photos taken, with boys in sailor suits and girls in white dresses. 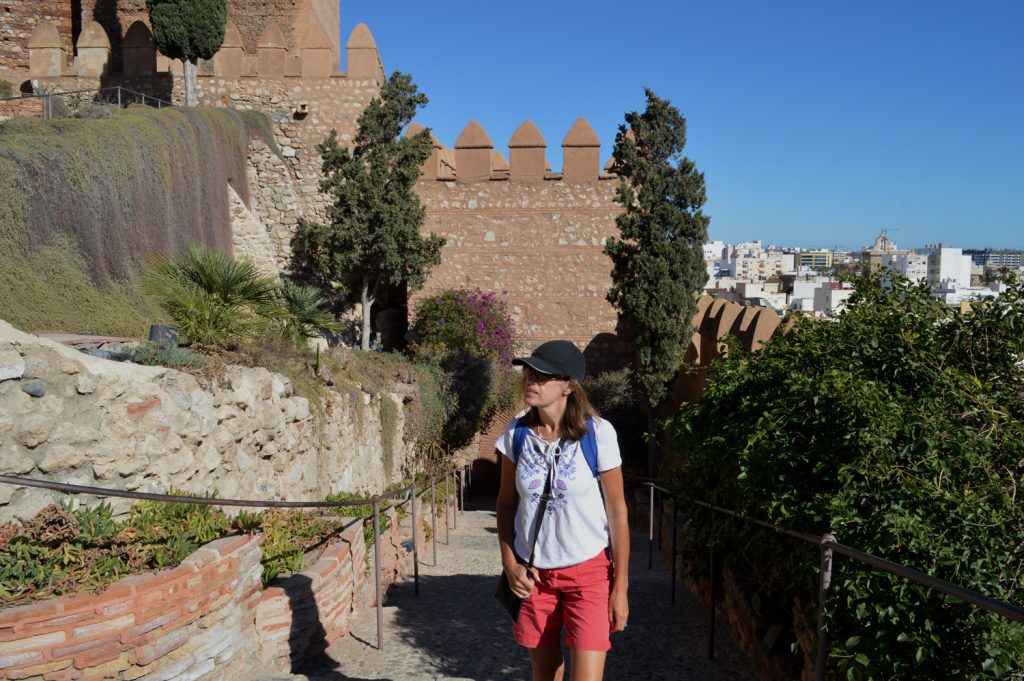 The afternoon was now drawing on and the small tapas was starting to wear off and stomachs growling so we decided to go looking for a light very late proper lunch. Finding a nice bar along the front we sat down ordered a couple of beers and went looking for menus, only to be informed the kitchen was closed until 8pm!  By now it was getting on for about 6 o’clock and we’d only had about two mouthfuls of food since breakfast, so we went back to Buzz and had dinner, intending to go out later and have a drink. Having had dinner we walked back along the front looking for a nice bar eventually going into a tapas bar only to be given another free tapa with the drink, which we both managed to eat. From there we made our way to a bar that looked interesting but was empty when we walked past it earlier, it was still empty when we got back but a bar down the road looked very busy so we went in there. As it happens it turned out to be a good idea, looking through the menu they had a mini Gin & Tonic with a choice of mini pudding tapas. We both opted for this option selecting 2 different puddings so we could share, both puddings were small but big enough as for the G & T there was nothing mini about them at all, they must have been at least triple measures and the puddings were delicious. 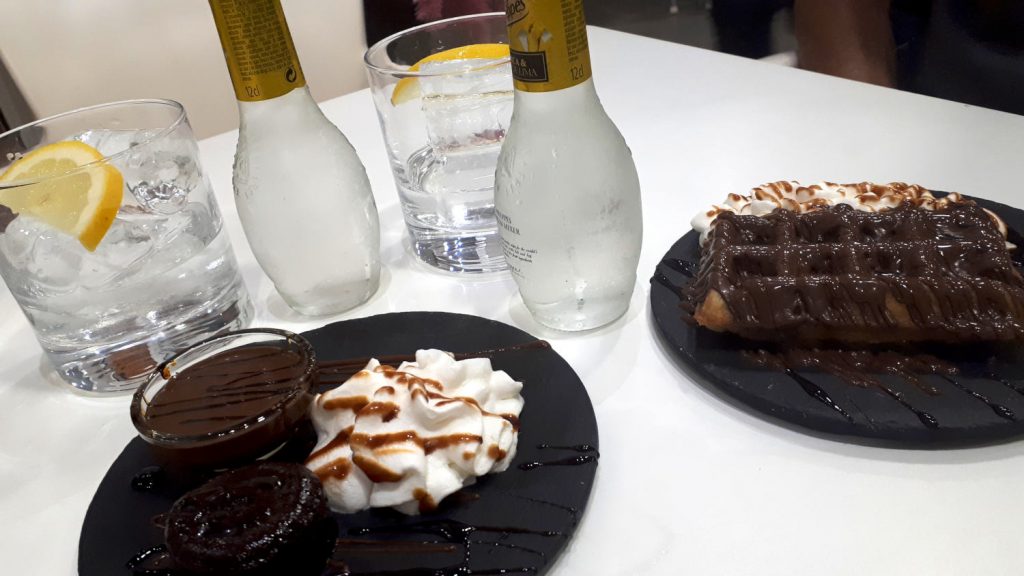 Eventually heading for Buzz and bed, we settled down to a very quiet night. Morning bought a decision to move on to Cabo de Gata and the natural park, part of Europe’s only dessert.