Sights and Sounds in the Black Forest Towns

Sights and Sounds in the Black Forest Towns

Leaving Lake Constance behind we headed to the Black Forest and reportedly one of its prettiest towns, Schiltach in the district of Rottweil, in Baden-Württemberg.  The motorhome aire is alongside a small car park and it was full when we arrived but we could see a couple sitting in the front of their van consulting their phones.  Thinking they were about to leave we waited…. and waited …. and eventually gave us, slotting in sideways in front of several cars while we had our lunch, after which they finally left and we slotted straight in before another newly arrived, lurking van could get in our spot!  The town sits alongside the river Kinzig which has been very important to the town’s history and its tradition of rafting. The timber industry was hugely important and each year up to 300 rafts of huge logs were rafted down the river to eventually be sold to Holland for ship building. The rafts could be a staggering 600 metres long! There’s a small but quite interesting museum set up demonstrating the rafting profession along with artifacts of the tannery industry which was the second and equally important industry. The town itself is small and steep with cobbled streets, a triangular and very sloping town ‘square’, some charming half-timbered buildings and the 400 year old painted town hall. 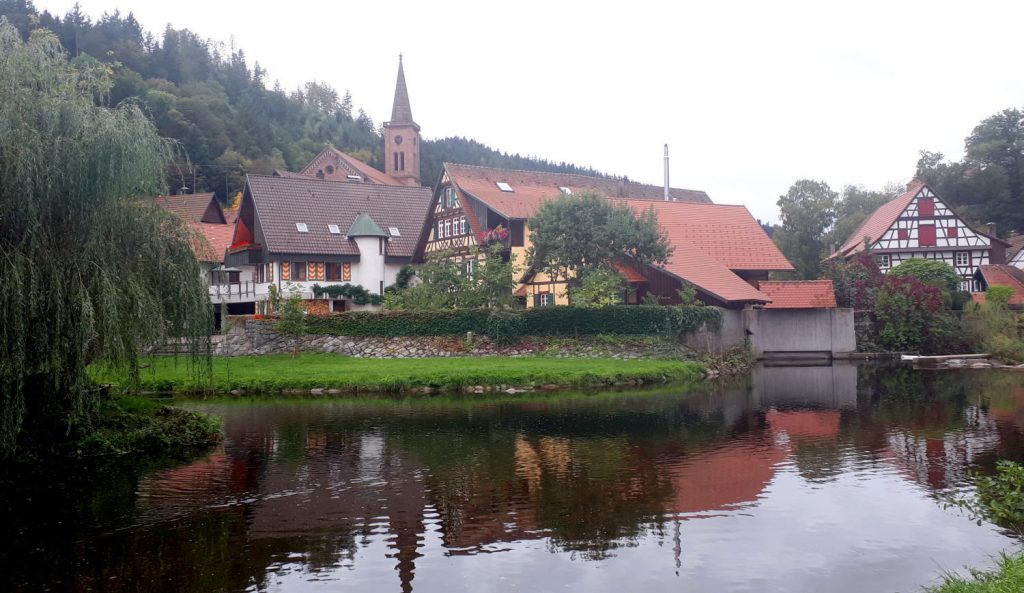 We’d noticed on the map several rodelbahn’s or toboggans. These open in summer for a bit of safe, high-octaine fun and we thought it would be good to do something different and give it a go.  The nearby Sommerrodelbahn at Gutach had a lot of good reviews so that’s where we headed next. It’s a fairly short track at just 1500m but you can have one ride for 3.50 euros or buy 6 rides at 3 euros a go.  When we arrived the place was swarming with teenagers on a school trip so we waited it out (so as not to show them up!?) and once they were gone we took our places.  The carts are for one or two people and we took one each.  We rode at the same time because it seemed more fun that way but it meant we didn’t get any action shots as you’re not allowed to take photos while you’re on the track.  You get in and get hauled up and up the Black Forest hillside before reaching the top and being let loose to make your way back down.  It’s a simple push forward to accelerate, pull back to brake and we went careening back down through twists, turns and hairpin bends at what felt like breakneck speed.  It’s not until you get off at the bottom and look at the screen that records your time (along with the excited grimace on your face!) that you realise the humiliation of actually only  reaching 35.3kph in Julian’s case, or even worse a snail like crawl of 25.7kph for me! I swear it felt more like 70!  It’s a great little place for a bit of light-hearted fun and there are many more of them dotted around the country so we’d recommend giving one a go. It’ll put a smile on your face! 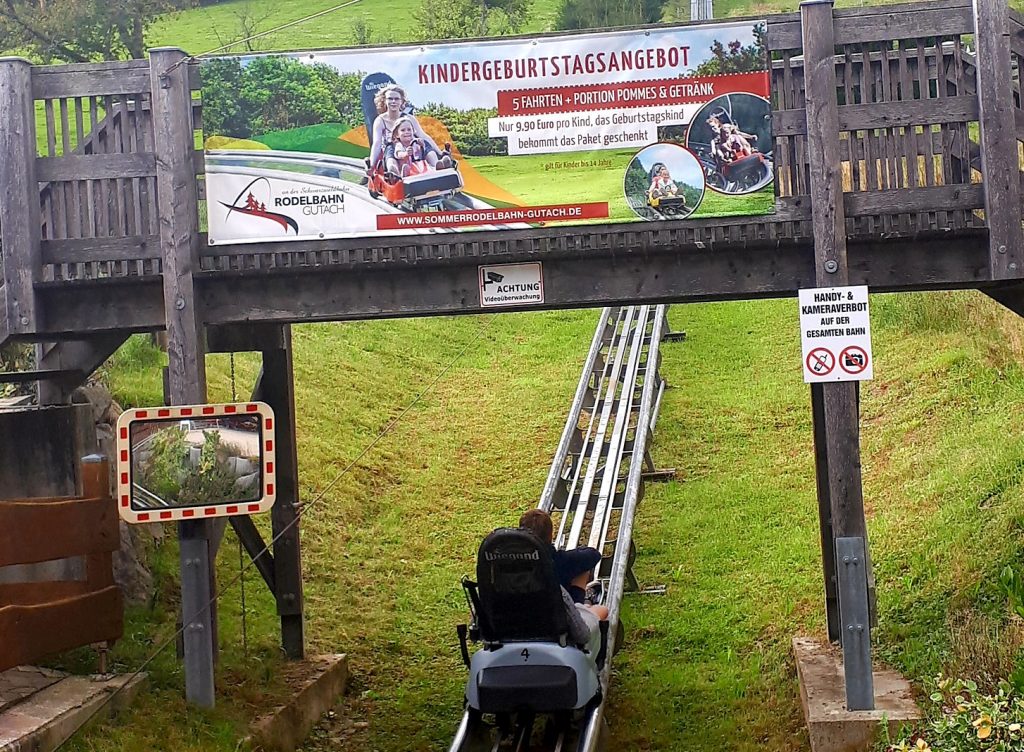 Not too far from Gutach is Schonach and the home of the world’s first largest cuckoo clock which has now been superseded by another in nearby Triberg with the bird alone measuring 14 feet long and weighing 330 pounds! Now that’s one big bird!   We had intended to go in but a sudden downpour meant we just rushed in and out of the van without going on the tour which takes you through a little garden and right inside the clock to see the makings.  There are several other large cuckoo clocks on display along the streets nearby as well as dozens of shops selling every conceivable shape, size and design of cuckoo clock you could possibly imagine.  You can’t visit the Black Forest without noticing cuckoo clocks. It’s a centuries old tradition and many of the clocks are intricately carved by hand costing hundreds if not thousands of euros.  We were quite amazed at the prices even spotting one particularly gaudy, crystal encrusted one for over 22,000 euros! 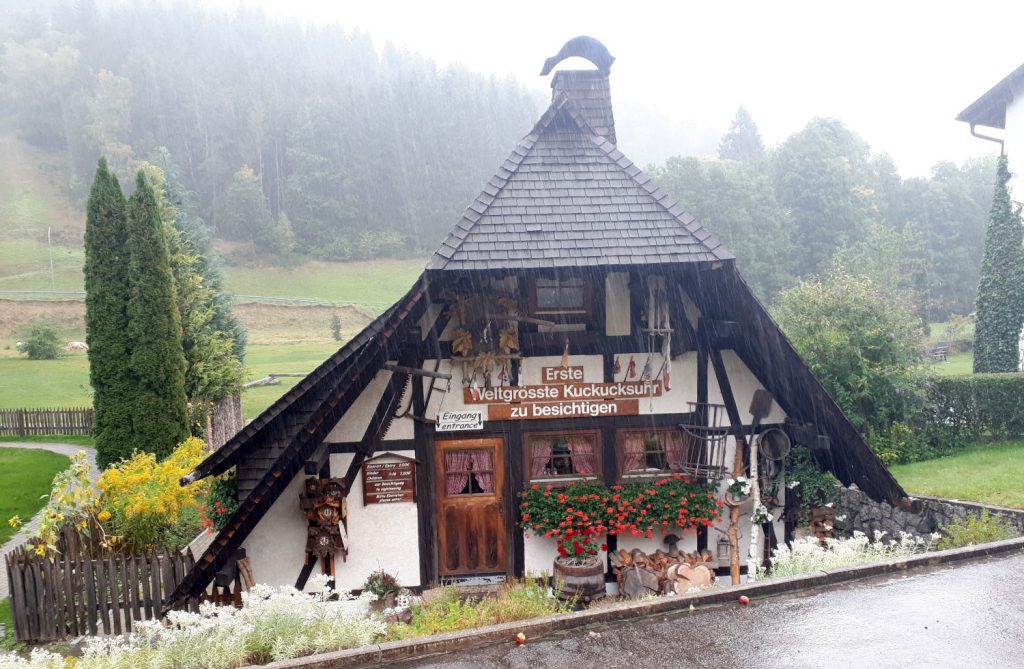 We moved on to Triberg and even more cuckoo clocks, shop after shop lining the streets selling them by their thousands. We didn’t go for that though, we went to visit the Triberg waterfall, one of Germany’s highest, gushing down the hillsides in a series of cascades from a height of 163m.  There’s an entrance fee of 5 euros which also gets you free entry to the Triberg-Land just down the road where you can see interactive model villages with little vehicles on tracks.  The motorhome parking area for Triberg (N 48.13020, E 8.22881)   is only just big enough for 3 motorhomes and it was full when we arrived.  We had to keep on going, getting further and further away from the town until we were so far we knew we would never walk back in the pouring rain. As luck would have it, we managed a U turn, drove back and by the time we got there a space had become free.  We dived into it as quickly as we could, got togged up head to toe in wet weather gear and set off for the falls.

One of the drops in the 163m Triberg waterfall

The woodland walk winds up and around the valley, going higher and higher with each stage revealing another cascade. The air was moist and misty with the spray of water heightening the lush greenery all around.  The rain eventually lessened and we noticed birds coming out of their hiding places and red squirrels scurrying about in the undergrowth.  They may not have been the most spectacular of falls but its very scenic and the sound of the rushing water, the picturesque woodland setting and wildlife made it a pleasure to visit even in the rain. 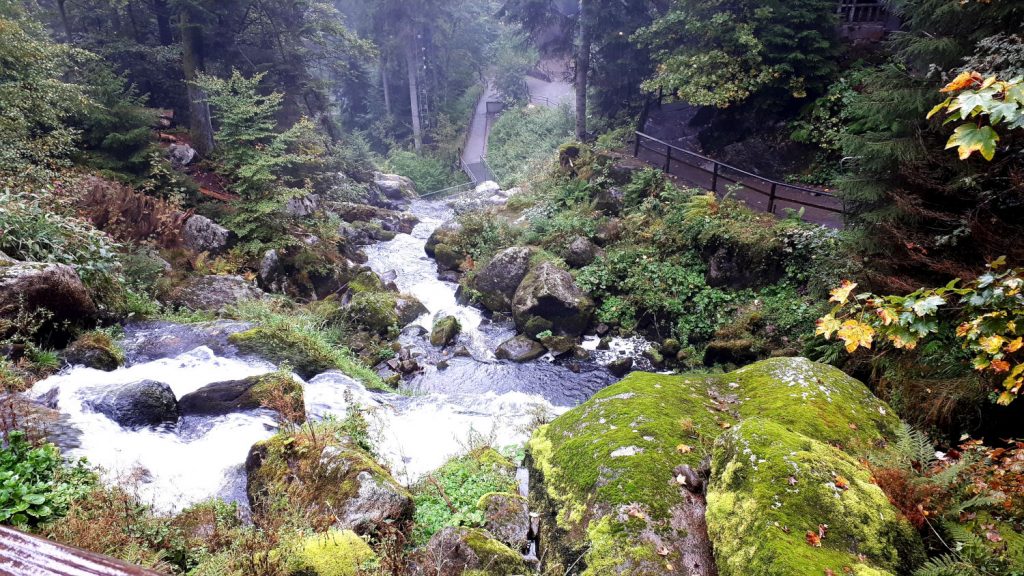 One of the seven cascades of the Triberg Wasserfall

After Triberg it was Freiburg, a buzzing university town with restored medieval old centre.  There are multiple Freiburgs in Germany, this one being Freiburg im Breisgau.   It was the weekend and the town was fit to burst with an enormous second-hand market in the grounds of the church, bands playing in the streets and a busy street market.  There was a mix of old and new with leafy avenues, grand old buildings, quaint medieval remnants, modern shops and trams traversing the streets.  The most picturesque part was the huge, Münsterplatz, the open town square next to the massive Freiburg Minster Gothic cathedral and its interesting mix of architecture.  Enticing cafes, bars and restaurants circle the cobbled square inviting you to while away an hour, watching the people come and go. 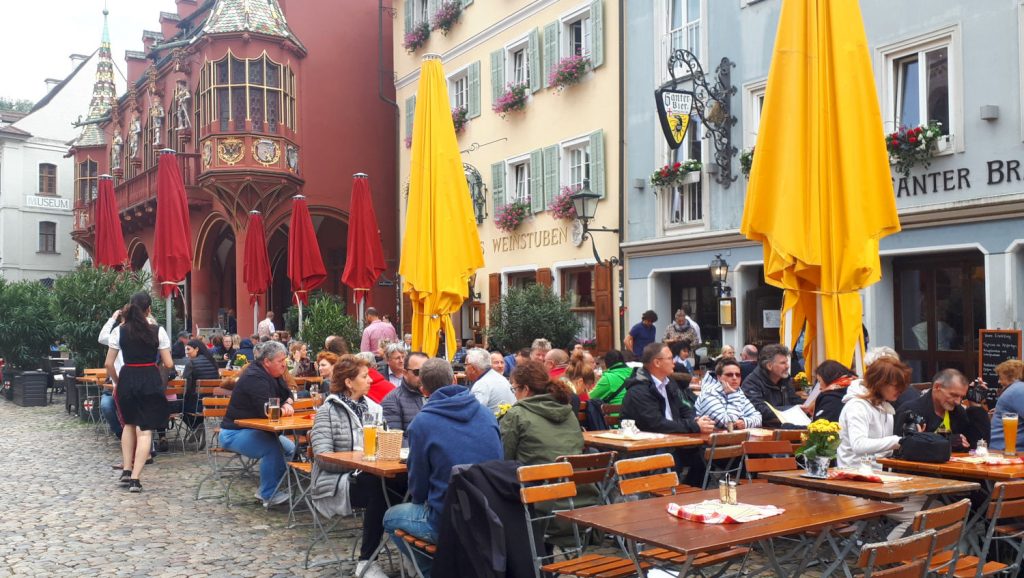