After nearly 16 months of motorhome travel it’s become really clear to us that motorhoming is not just about places but also a lot about people. Most of those people along the way are those you don’t already know, but the best thing about having your home on your back is being able to take a detour and travel to see those that you do. Our lovely friends Debbie and Paul live on the Costa Blanca near Torrevieja and we’ve visited this area many times before. It was a special birthday for Debbie and it was great to be able to visit for a few days and celebrate with her and a fantastic crowd of friends. 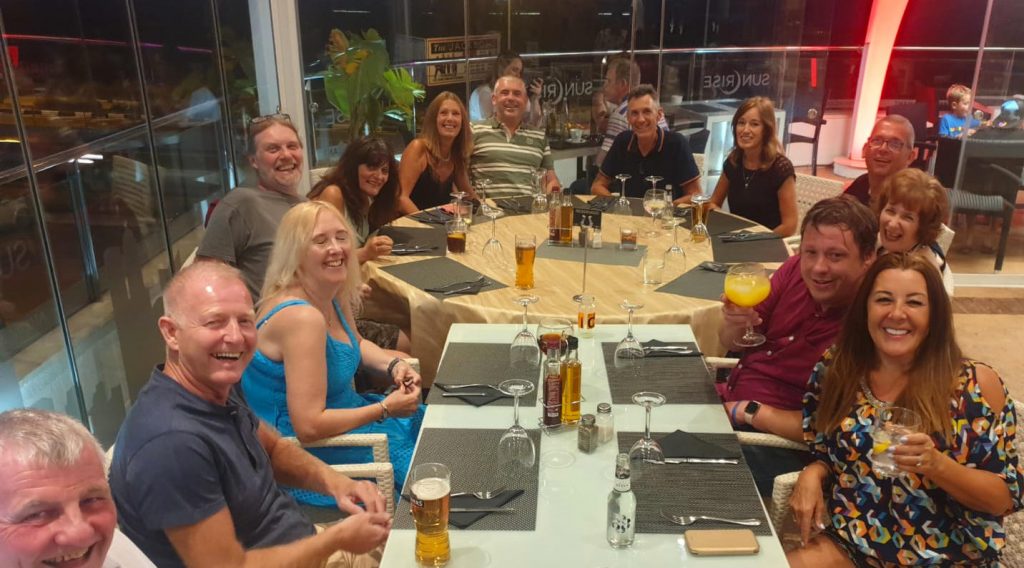 A fantastic birthday meal with friends in Spain

We have a favourite thing to do on a Sunday afternoon at the sea front restaurant Nautilus when we’re there – an afternoon jug of Sangria in the sun! They have a big outside courtyard right by the sea where you can sit and sip in the hot sun and the cool breeze. The ideal way to while away a relaxed Sunday afternoon. Nearly mid October, 5pm and 27° – bliss! 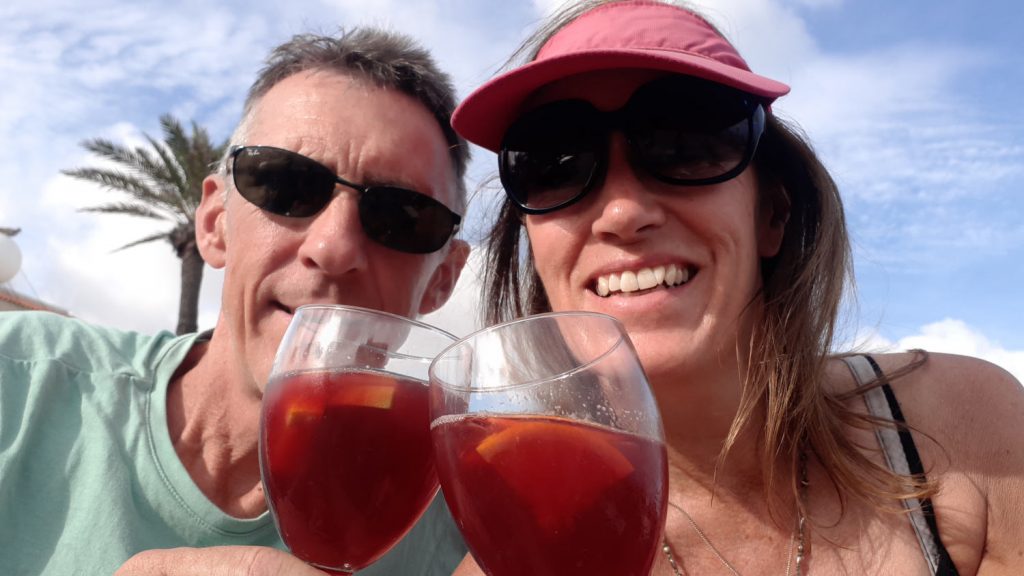 You can’t come to Spain without having a Sangria!

After a few days catching up, celebrating and staying put for a while we stocked up in the supermarket ready to continue our journey. The supermarket was full of Christmas goodies already and we spotted a huge pick and mix selection of Montecados and Polvorones de Almendra which looked too good to miss. They’re very attractive wrapped up in their colourful little greaseproof paper cases and made with almonds, wine and lard and having tried them before we knew they would be just perfect for elevenses! The word ‘polvo’ means dust, which doesn’t sound exactly appetising but what it really means in this case is very crumbly. Admittedly they are a bit dry, like a shortbread cookie so a cup of coffee alongside is what you need to really enjoy them. The Spanish tend to have them with a glass of sparkly Cava or liqueur though so maybe we should try that too. They’re very crumbly so it’s best to give them a good squeeze before unwrapping, squashing the contents together so they don’t fall apart. We know from experience that dunking is not advisable and result in a disappointing dunking disaster! 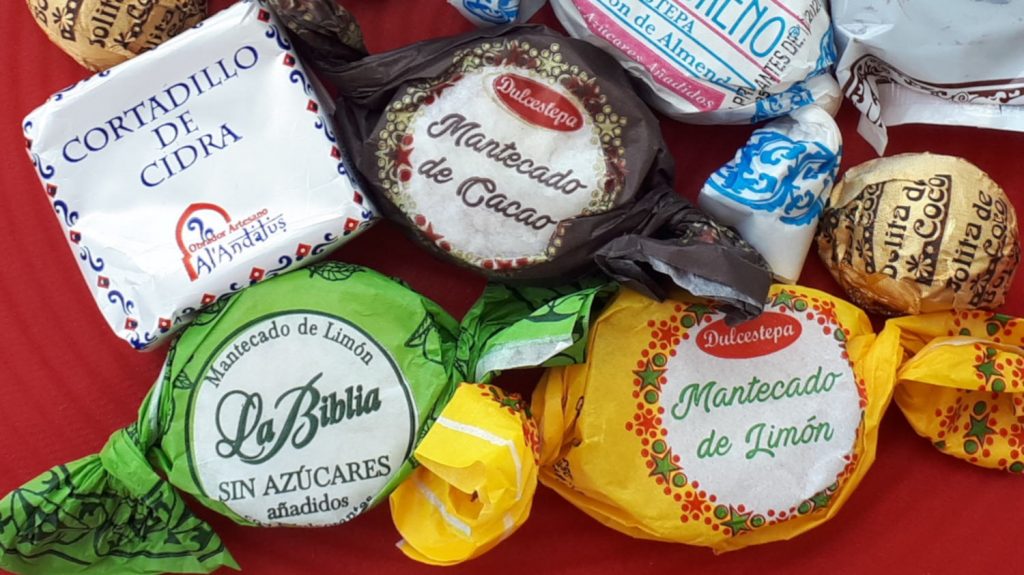 Polvorones and mantecados – tasty almond treats but not for dunking!

As we set off we really weren’t quite sure where we were headed. As much as we try to plan occasionally, we’re just so relaxed these days we never end up making a decision! As it was, we ended up in Denia. It’s a place we’ve seen mentioned before and looked quite interesting, so having found a place to park for the night, ended up there parked on the beach. 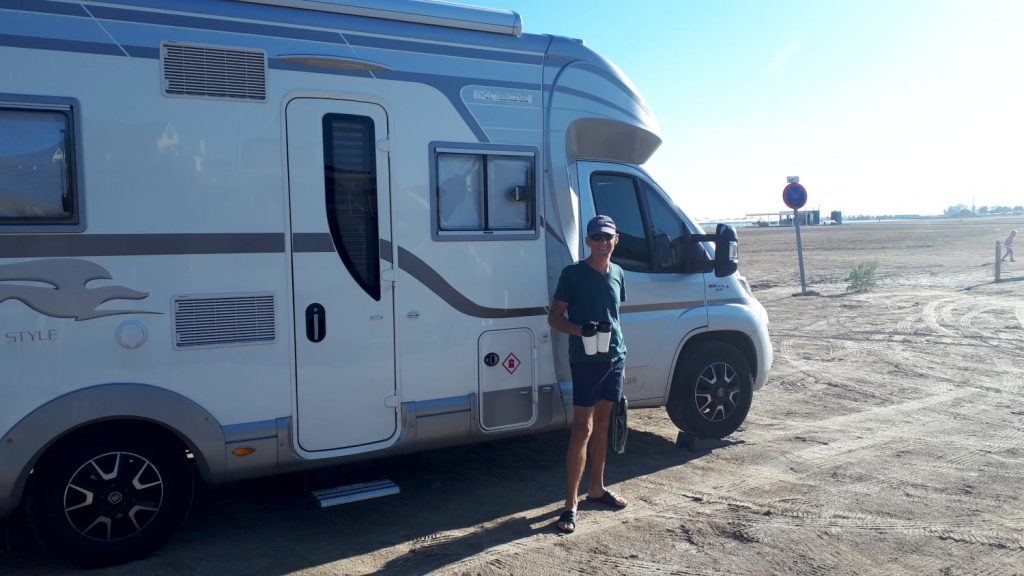 Our free, sandy parking spot right by the beach in Denia.

After a leisurely wake up we chatted to our friendly and extensively travelled van neighbour David (find him on instagram – @travelingvan47). He used to be a mariner and spent around 30 years on boats alongside having a motorhome and travelling. These days he is retired and lives full time along in his motorhome, pleasing nobody but himself and loving his nomadic life.  Being a mariner he’s a keen weather follower and he told about us about a very accurate app and website to use which we haven’t tried yet but will download when we can – windy.com.  He warned us about a storm due to hit the coast in the next few days which we hadn’t known about so that helped us make a decision to head inland slightly as we headed back up North. 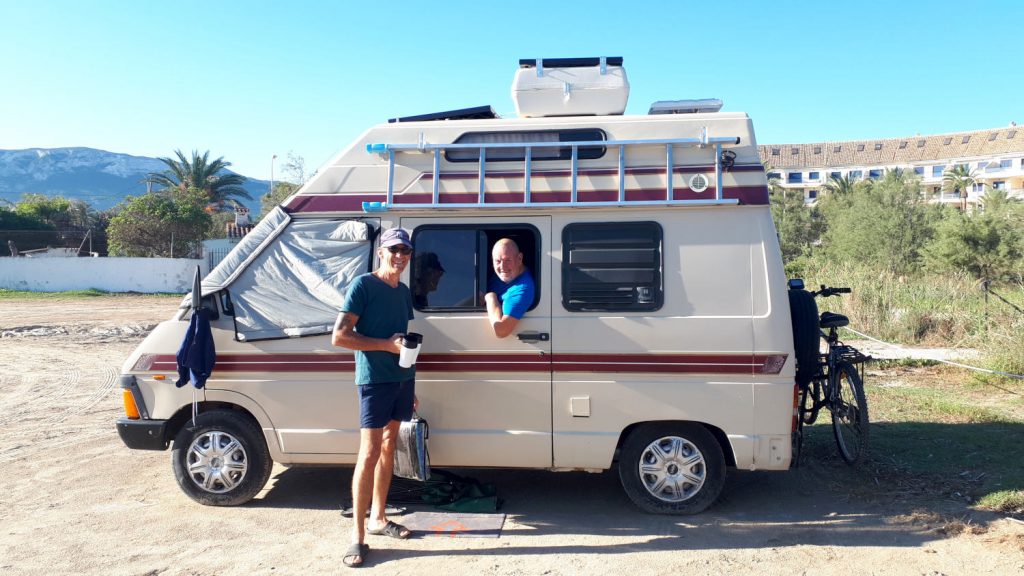 Captain David Denham in his home on wheels

Denia’s beach is long, white and sandy and we made a flask of coffee, took the picnic rug and went out for a lazy sit watching a fisherman cast out, reel in, cast out, reel in over and over again in the vain hope of catching a fish. The sea was perfectly still and the temperature just right. We could have sat for hours and only moved because we our backs were aching sitting without chairs. The water looked really inviting but a toe in the water soon revealed its secrets and we decided to leave the swimming for someone else! 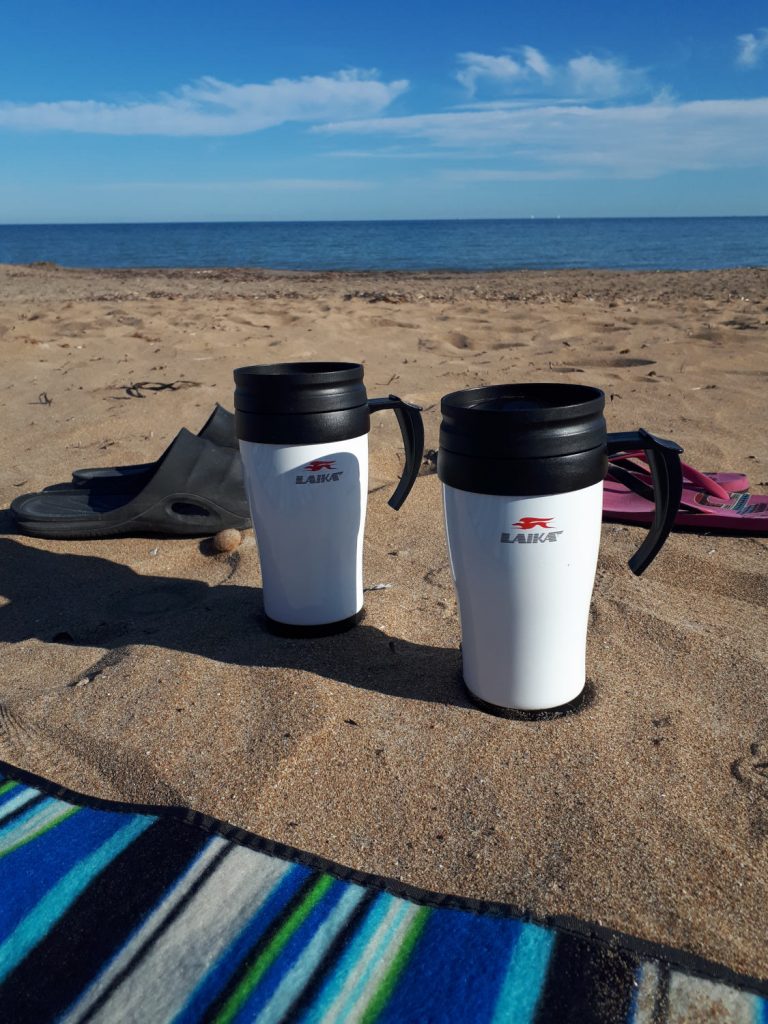 A lazy morning on the beach

After that we wandered down to the town, making a beeline for Denia castle which was once an Arab fortress with 2,000 years of history.  It looks deceptively small from the road below but once you get in, for 3 euros, there’s actually quite a lot to see with plenty of nooks and crannies to explore, towers to climb and great views over the harbour and countryside.  A tunnel was built to shelter and protect the town’s citizens during the Spanish civil war and runs underneath the castle, connecting the two sides of the town. 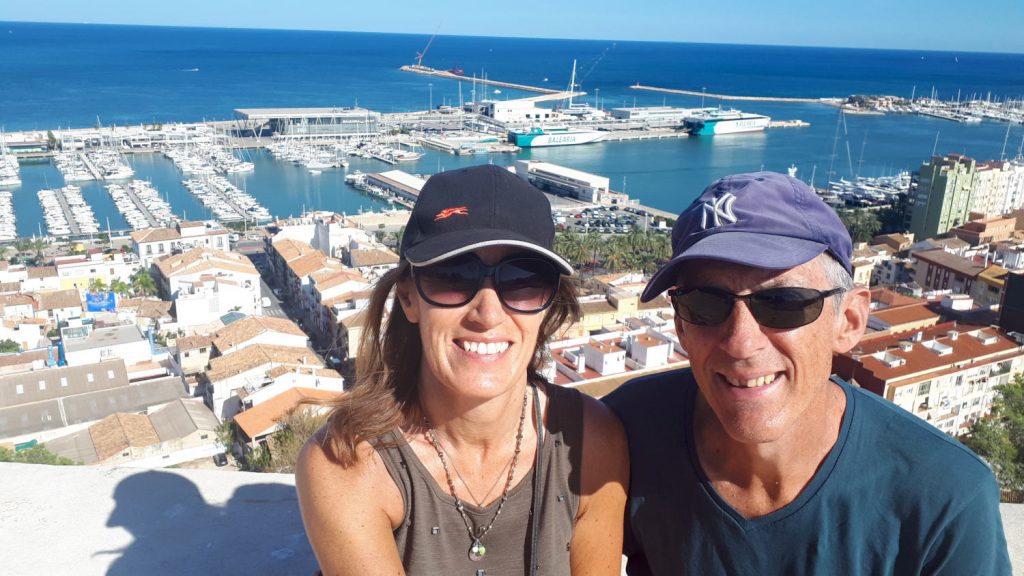 Wide reaching views from the castle down to the harbour on one side and countryside and mountains on the other.

The marina area is full of swanky yachts including the huge 344 ft long Lady Moura, a luxury vessel owned by a Saudi billionaire and currently getting a bit of a revamp. When it was first launched in 1990 it was the 9th largest privately owned yacht in the world, but has since moved down the list as bigger and better yachts have been commissioned. It boasts a massive 45 cabins, enough for 30 guests and 60 staff!  It’s said to have cost around US$ 250 million! 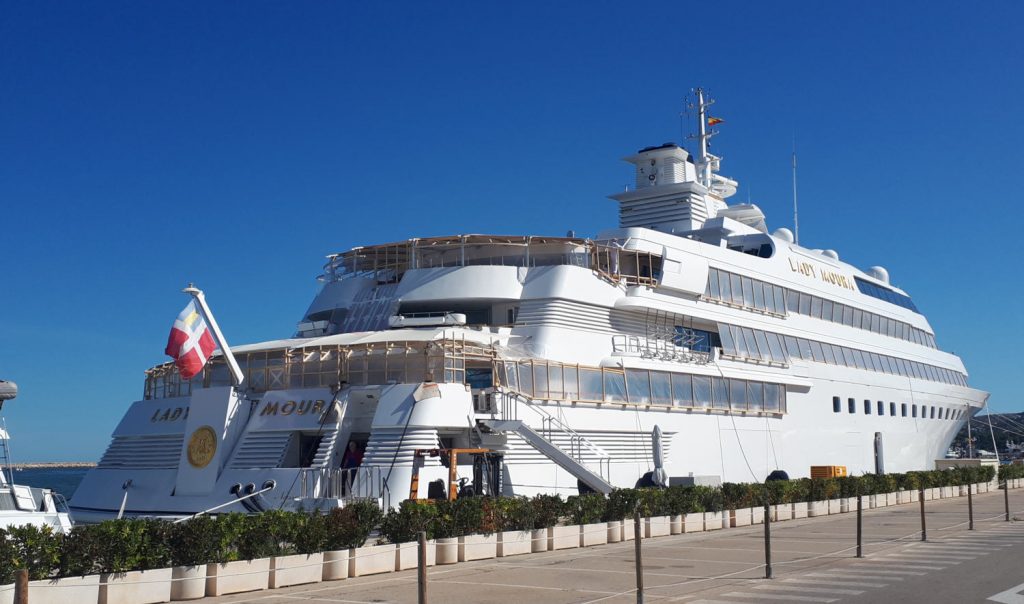 US$ 250 million worth of luxury, private yacht!

Denia is also a working port of two parts with boats making trips over to Ibiza and a busy fishing port with daily market. We watched as the boats arrived with their catches of the day ready to sell to the highest bidder in the market place.  It’s possible to go inside the covered market building and watch the auction along with taking a tour for a close up look at the boats, walk through the fishing platform, watch the fishermen mending their nets but you need to book in advance so we weren’t able to do that. 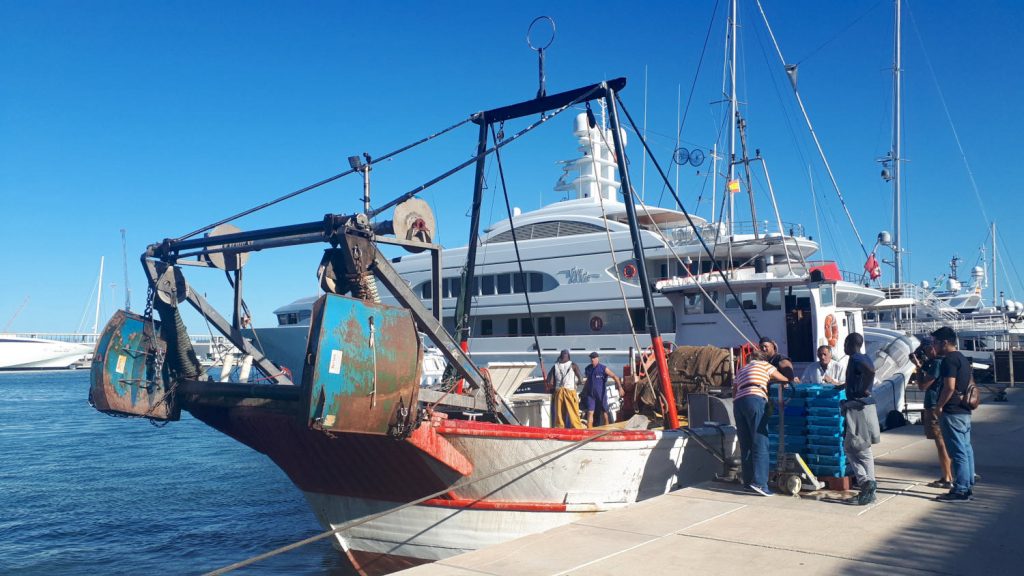 The boats come in at around 5pm every evening with the day’s fresh fish.

The quaint old streets of the historic centre of town and around the church and castle are fit to burst with small bars and tapas restaurants. We spotted a blackboard advertising a glass of cava with free tapas and several others with similar offers. There is a covered corridor with dozens of eateries and bars leading off of it, cosy courtyards with tables and chairs under the palm trees and many other tempting places to eat far too much in the maze of little streets in the old town.  Being just a 15 minute walk away from the motorhome it was the perfect opportunity to have a night out so we went back, got showered and freshened up and went back out for a few drinks and tapas to round off the day perfectly. 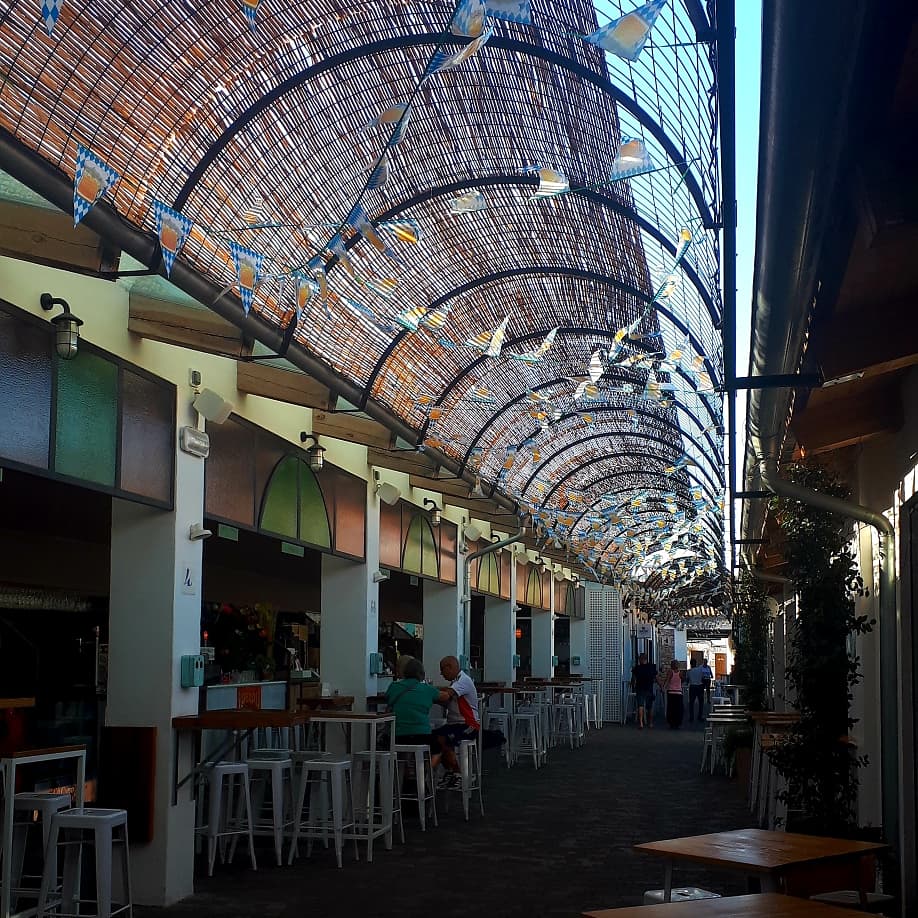