A Bridge, A Palace – and a Papal legacy

A Bridge, A Palace – and a Papal legacy

Our visit to the historical city of Avignon didn’t get off to the most auspicious of starts. Rocking up at our chosen aire, I duly took out the credit card to pay the entry machine only to be confronted with a message from the machine informing us it was not possible to enter the site. Trying again a few times and getting the same message over and over again was very frustrating given that we could see two other motorhomes already parked inside!   The machine did however suggest I might like to purchase some very expensive tokens with which I could pay for the services inside the aire it was refusing us entry to!

So began the search for somewhere else to stay the night, which as it happened proved relatively simple with the discovery of Camping Bagatelle  just down the road on the banks of the Rhone, where a quick look at the price list told us it would be 18e/for the night + 3e for electricity which does seem very reasonable but not what we want to be paying every night when on a prolonged tour with a finite budget. Enquiring at reception revealed a few more details and an option to stay in the outer area for 12e but without the option of electricity (which we needed on this occasion) also we would have to be out by 9.30 in the morning, whereas in the main site it would be 11.00 in the morning with the option to stay until 6.00pm for a further 3e. In the end we decided it was the best option to go in with the extension until 6pm giving us a full day without having to rush back. The site is set up in a prime position right opposite the city in a peaceful riverside location so once again reaching for the trusty credit card I set off to pay, luckily spotting an ACSI (camping discount card) sticker in the window on the way.  Presenting the card at reception got us the night with electricity for the reduced sum of just 18e  so we paid the charge and parked in our allotted space. The facilities were good if not slightly dated and the ideal location, being our top priority, certainly made up for it. 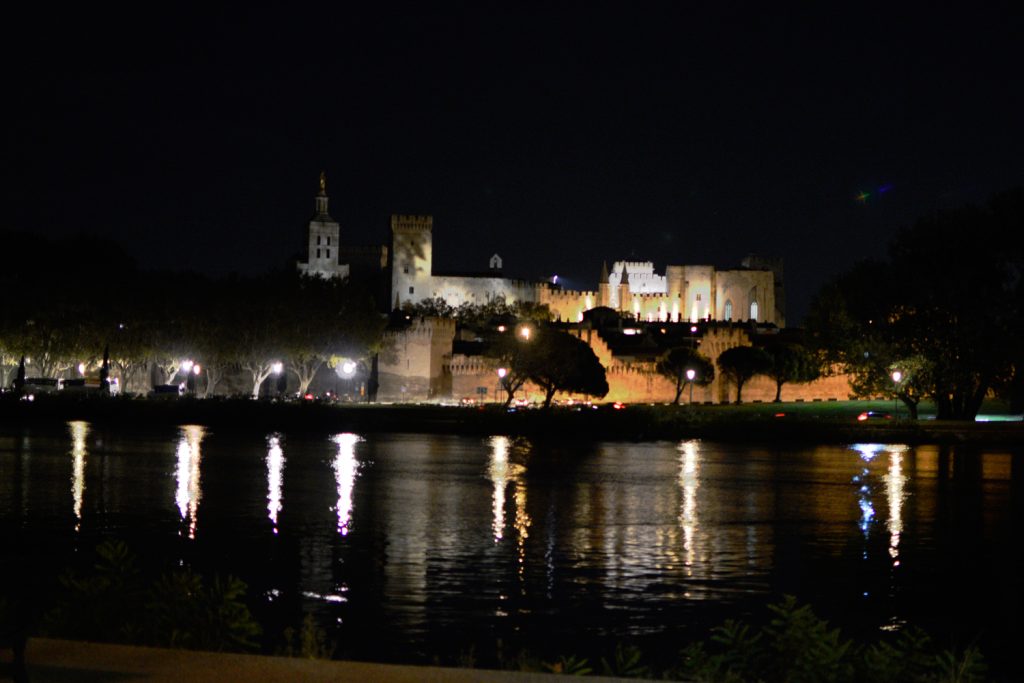 After dinner we decided to take an evening wander across the bridge (Pont Edouard Daladier) into the city only to be greeted with a big orange moon sitting over the Pont St Brenezet (the famous half bridge) and the city walls all lit up giving us a great first impression. Carrying on we made our way through the Porte De L’Oulle into the walled city where we were met surprisingly with virtually deserted streets, a little exploration took us to the Place De L’Horologe a large square lined with restaurants, the social hub of the city with a few people sitting out enjoying drinks and meals and a home to 1900 merry go round. A little further on we reached the Place Du Palais and the entrance to Palais Des Papes, but as it was so quiet we headed back to make full use of our electricity, looking forward to really exploring the next day. 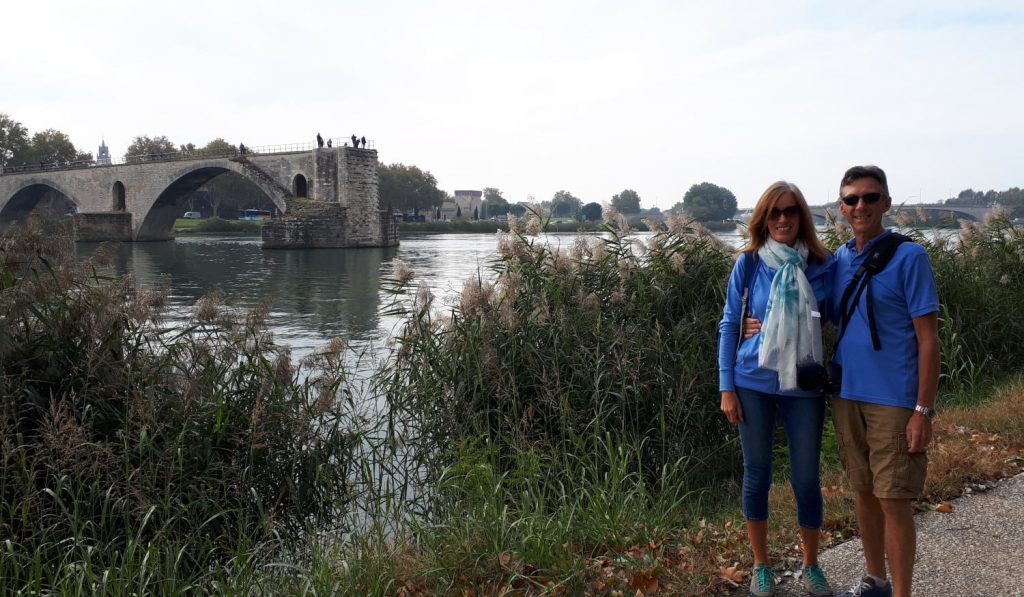 Next morning saw us walking around the city making our way through the lovely streets lined with nice shops to the Tourist Information to gather maps and guides for the day. From there we decided to head straight for the indoor market at Les Halles and although in this case a modern building and lacking some of the character of other markets we’ve visited it was as always the beating heart of the shopping area and an interesting place to wander. The market does have one unique feature – a living wall with 20 plants per square metre growing on it.  From Les Halles we worked our way to Rue Des Teinturiers where the local textile industry thrived through the 19th century with the road winding alongside a canal where even today the water wheels that drove the machinery still remain and continue turning. The road is now home to an arty area of the city with small edgy bars, restaurants, art and books shops as well as little theatres giving it a vibrant feel. Avignon is also well known for its colourful trompe l’oeil street frescoes and it was interesting to turn a corner and suddenly spot an artwork on the wall – some better than others! 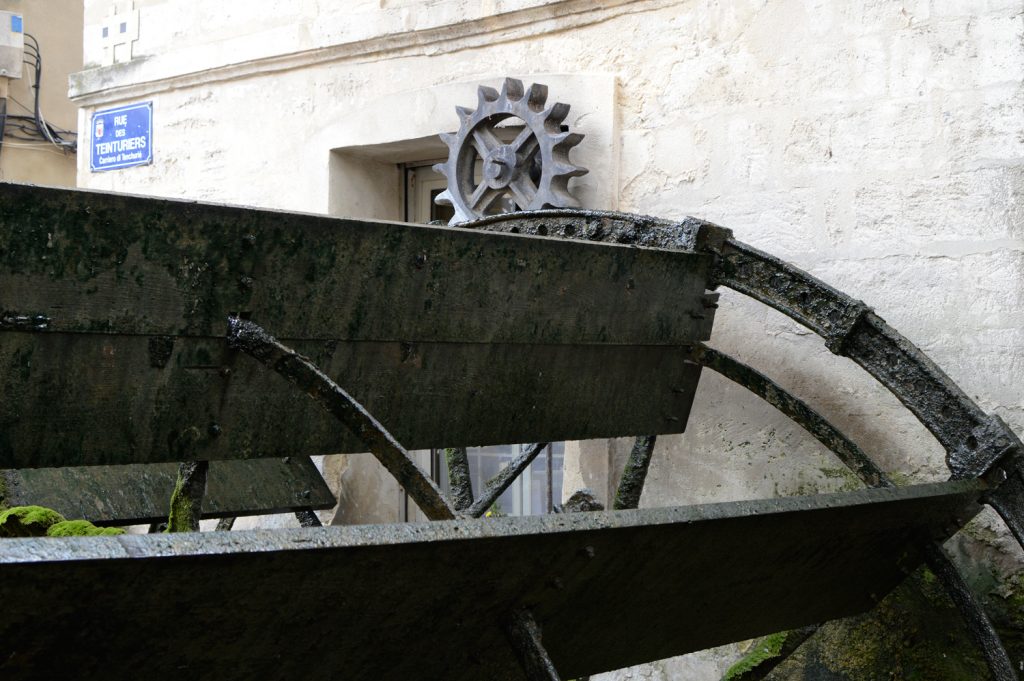 With lunchtime approaching we made a beeline to for ‘Creperie ‘La Flourdiliz’ in Place du Cloitre Saint Pierre which Marcella had found the previous night while searching for restaurants for lunch and as we had been promising ourselves crepes it seemed appropriate.  This restaurant is know for its Buckwheat Breton Galettes and Crepes which we liked the sound of so we were happy when it came into view looking cosy and welcoming on this slightly cool day. We both had a Jambon, Fromage and Oeuf  Buckwheat Galette to start finishing with an even tastier Grand Marnier and Chocolate Crepe washed down with a glass (or two – who’s counting?) of wine – it doesn’t really need to be said but the crepes were delicious. 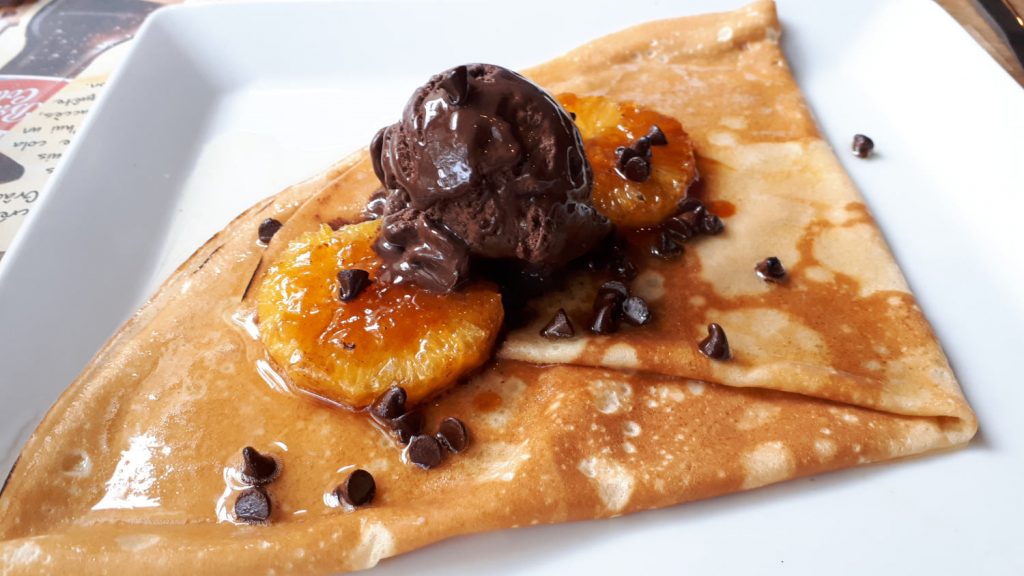 After lunch and feeling full and rejuvenated it was off to the Palais Des Papes. In the Place du Palais outside the entrance was a small Italian market with many recently tried delicacies to try again before our visit – we are so easily distracted by local produce!  The Palais Des Papes is part of the UNESCO World Heritage site encompassing the Palais, Pont d’Avignon and Notre-Dame des Doms Church. The Palais is really the jewel in a very full crown and a stunning site. Dating back to the 14th century when Pope Clement V decided to move the seat of Papal power from a troubled Rome to Avignon in 1309 having the first part of the palace built 9 Popes followed before the Papacy moved back to Rome in 1377 by which time a magnificent legacy had been left behind, the Palace having been extended, improved and strongly fortified. 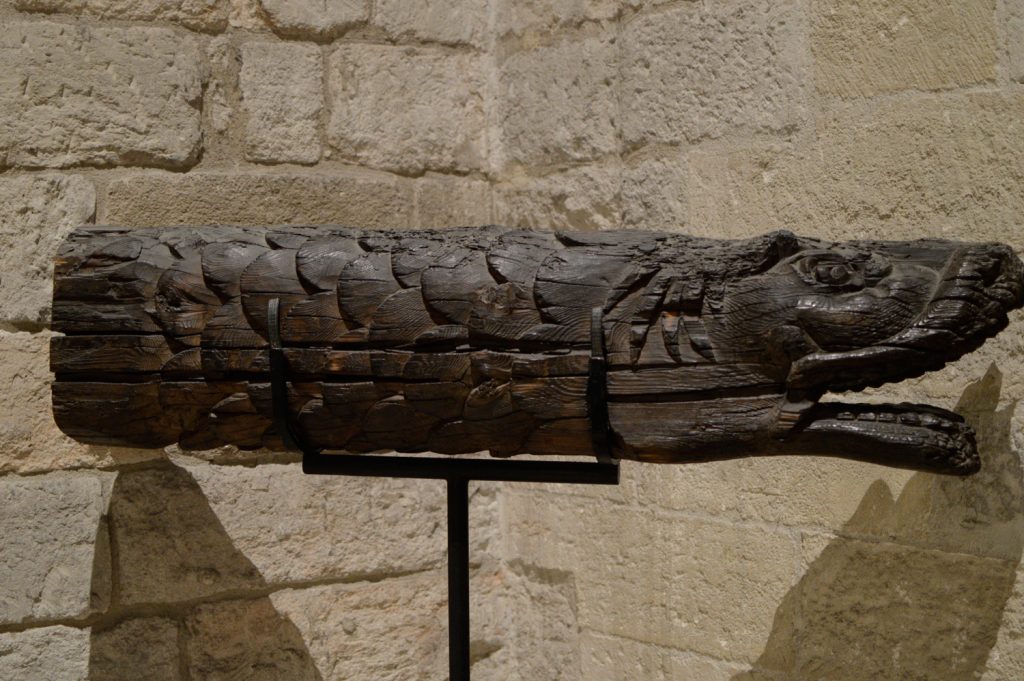 The entrance is a very reasonable 12e when compared to many lesser places we have visited, the fee also includes an ipad (to borrow during the visit that is not to keep) which guides you on your visit with narration and maps. There are also various points around the route where scanning an icon you get to see an augmented VR view of the room you are in laid out and decorated as they were back in the 13th century including interesting snippets of information, the visit winds it’s way through the palace with plenty to see and several original frescoes still excellent condition, ending up on the roof top terraces overlooking Champeaux’s Door with views over the river and parts of the city. We were also fortunate to see the exposition Mirabilis set in the Great Chapel which brings together over 350 work from the secret collections of museums and institutions in the city from Pre-history to modern art.

Leaving the Palace we just had time for a quick exploration of the local area including a closer look at the St Benezet Bridge or what there is of it, which can also be visited with Augmented VR along with Pont d’Avignon. The Bridge is interesting in that St Benezet was canonised as a result of pushing for many years to have the bridge built and after many failures decided to lay the first block himself a block so enormous as to be considered an impossible feat and so the bridge was built and he became a saint at some point. The bridge was started in 12th century but it was only in the mid 13th century that it was actually built with 22 arches. Today only 4 remain as the Rhone changed with the climate (Climate change isn’t a new phenomenon) parts of the bridge were swept away and repaired several times before being abandoned in the 17th century. 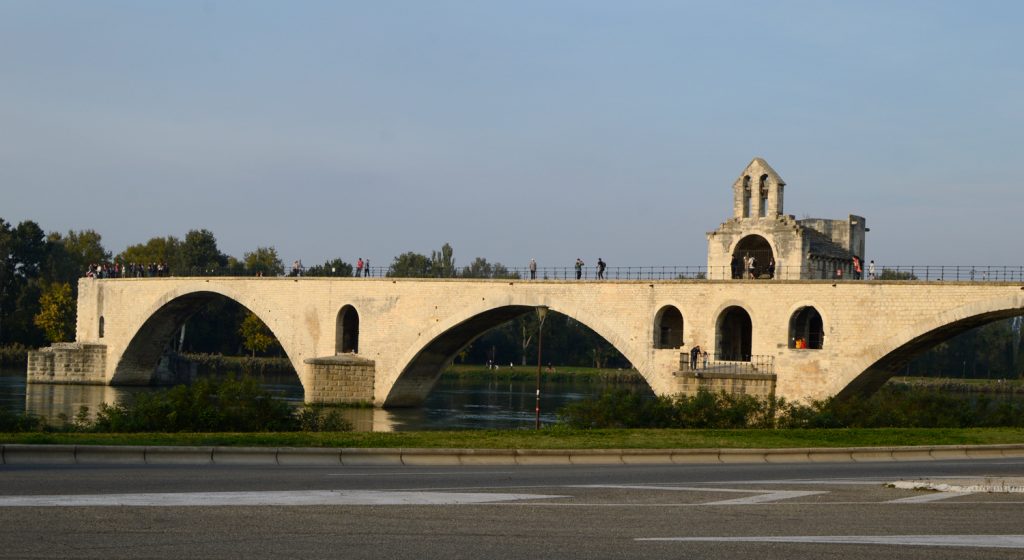 From the Pont d’Avignon we made our way back to the campsite to pack Buzz up and get him out before 6pm, only to be met by another terse response as I tried to pay at 5.45pm “can’t you see we are closed”, “I just want to pay you”, “come back later!”  Well we did eventually pay after waiting 15 minutes for the reception to open and headed off to a new adventure staying at the ruins of the Chateau in Chateauneuf du Pape and some serious wine tasting.